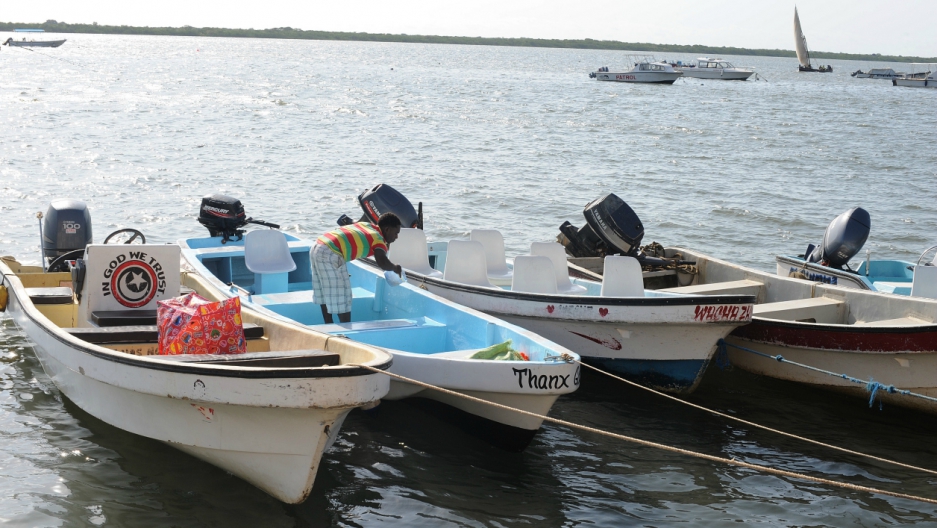 A local boat driver cleans his boat while waiting for clients in Lamu in June 18, 2014, a few days after roughly 50 heavily-armed gunmen attacked the town near the coastal island and popular tourist resort in Kenya. At least 49 people were killed in the attack.
Credit: SIMON MAINA
Share

A vital part of east Africa's biggest economy, Kenya's tourism industry has been in decline since 2013 when al Shabaab stormed an upscale shopping mall in the capital Nairobi, killing 67 people during a bloody four-day siege.

Since then, repeat al Shabaab attacks and travel warnings issued by Britain, the United States and Australia have emptied Kenya's palm-fringed beaches and forced hotels to lay off staff.

Hoteliers say the pre-dawn attack on a campus in Garissa, a remote town 120 miles from the Somalia border, far off the tourist trail, is likely to spark another wave of redundancies in the hospitality sector.

"We were expecting tourists from UK, Germany, France, Australia and Asia continent, but they canceled their bookings when they learned of the terror attack,” said Peter Kipeno, the owner of a luxury tented camp in Kenya's Maasai Mara game park.

Kipeno, whose camp has a 25 bed capacity, said 19 visitors canceled their bookings on Thursday when it became clear the raid was the deadliest attack on Kenyan soil since 1998, when al Qaeda bombed the U.S. embassy, killing more than 200 people.

Along Kenya's volatile coast region, where 23 hotels have closed in the first three months of the year, hoteliers also reported cancellations but said the true extent of the damage will become clearer on Tuesday when European tour operators return to work after the Easter holiday.

Hersi said some of the management and staff at his luxury Heritage Group hotel chain had recently taken pay cuts of between 20 to 30 percent, hoping to avoid lay offs during one of the worst periods for Kenya's tourism sector in recent memory.

"It seems we might have to go further and lay off staff, because we may not sustain even this reduced wage bill."

Steve Keriga, assistant manager of Mara Sarova Game Camps, said the impact would be felt from this week and is worried about the outlook for the busiest part of the year.

“The attack might affect the July-October peak season,” he said, a reference to the annual wildebeest migration between Tanzania and Kenya in the Maasai Mara reserve.

Al Shabaab militants have killed over 400 people in Kenya since April 2013 with the government struggling to stop fighters and weapons coming across the with Somalia.

Kenya has shown no inclination to pull out of Somalia where its troops, part of an UN-backed African Union peacekeeping mission, have wrestled swathes of territory from the Islamist group.

Western diplomats, however, say this loss of territory has not weakened al Shabaab's capacity to carry out one-off guerilla-style attacks in native Somalia or further abroad.

Kenya said its air force bombed two al Shabaab camps in Somalia on Sunday to try and weaken the group.

In the capital Nairobi, where local media have become increasingly critical of what they call a bungled security response to the Garissa attack, dozens of grieving families are still trying to identify bodies at the city's mortuary.

The attack has piled pressure on Kenyatta, who upon taking office in April 2013 vowed to triple tourist numbers to five million annually within five years, and get economic growth into double figures to lift millions out of poverty.

Kenya recently also set up a special tourism "task force" to devise a plan to lure tourists back to the east African nation.

"The Garissa attacks have dented our image more as a tourist destination in the eyes of the international community and our initial efforts to clean up our image have now been rendered futile," said Sam Ikwaye, head of the coastal region's Kenya Association of Hotel Keepers and Caterers.

The timing of the Garissa attack was also embarrassing for Kenyatta, who a day earlier had berated Britain and Australia for issuing travel warnings for Kenya due to security threats.

“The travel advisories we have been complaining about and saying they are unnecessary, are being justified by these consistent attacks. What other language can we use now to convince tourists? We are not giving up, but there is little hope either," said Hersi.