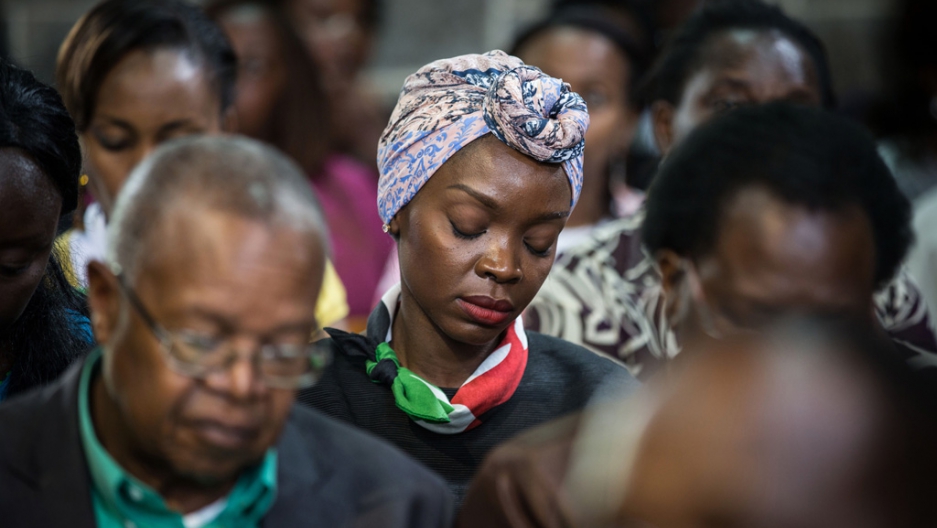 Hundreds gather for an Easter service at the All Saints' Cathedral in Nairobi on April 5, 2015, mourning the killing of almost 150 people in an attack on a university April 2, in the town of Garissa.
Credit: Nichole Sobecki
Share

GARISSA, Kenya — The son of a Kenyan government official was one of the masked gunmen who killed nearly 150 people at a university last week, the interior ministry said on Sunday, as Kenyan churches hired armed guards to protect their Easter congregations.

Pope Francis decried Thursday's attack in his Easter Sunday service, praying for those killed by Islamist gunmen who hunted down Christians while sparing Muslims.

At one church in the Indian Ocean port city of Mombasa, worshippers were evacuated and a bomb disposal unit deployed due to a suspicious vehicle parked outside the church. Police took it away for further examination.

Interior Ministry spokesman Mwenda Njoka said Abdirahim Abdullahi was one of four gunmen who stormed the college campus in Garissa, some 200 km (120 miles) from the Somali border.

An ethnic Somali with Kenyan nationality, his father is a government official in the northern Mandera county bordering Somalia, he said.

"The father had reported to security agents that his son had disappeared from home... and was helping the police try to trace his son by the time the Garissa terror attack happened," Njoka told Reuters in a text message.

President Uhuru Kenyatta on Saturday said the planners and financiers of Islamist attacks were "deeply embedded" within Kenyan communities and urged Muslims to do more to fight radicalization.

Ali Roba, the governor of Mandera county, said Kenya had "massive radicalization problems, not only in the northern counties, but across the country."

A Garissa-based official who did not wish to be named said the government was aware Abdullahi, a former University of Nairobi law student, had joined Al Shabaab after graduating in 2013: "He was a very brilliant student. But then he got these crazy ideas."

Al Shabaab said Garissa was revenge for Kenya sending troops into Somalia to fight alongside African Union peacekeepers against it. The Al Qaeda-aligned group has threatened to turn more Kenyan cities "red with blood."

Police have stepped up security at shopping malls and public buildings in the capital Nairobi, and the eastern coastal region frequently targeted by Al Shabaab.

Militant attacks on Christians have damaged Kenya's traditionally cordial Christian-Muslim relations, and priests said they feared churches could be targeted on the main liturgical feast in the Christian calendar.

"We are very concerned about the security of our churches and worshippers, especially this Easter period, and also because it is clear that these attackers are targeting Christians," Willybard Lagho, a Mombasa-based Catholic priest and chairman of the Coast Interfaith Council of Clerics, told Reuters.

Three private security guards frisked churchgoers with hand-held metal detectors, while a fourth guard used a mirror to check for explosives underneath cars.

"Everyone is anxious and you never know what will happen next, but we believe the biggest protector is God and we are praying," said Samuel Wanje, 27, a youth member at the church.

In Garissa, where masked gunmen killed more than a dozen people in raids on two churches in 2012, six soldiers guarded the main church and about 100 worshippers ahead of Sunday mass.

Authorities have stepped up security, imposing a dusk-to-dawn curfew along Kenya's 700 km (440 mile) border with Somalia. Helicopters patrol its palm-fringed coast, popular with Western tourists and the scene of Islamist attacks in the past.

Kenyatta is under heavy pressure to halt Islamist attacks that have ravaged Kenya's tourist industry and the Daily Nation newspaper questioned in an editorial why it took nearly 15 hours to end the siege.

"It ... beggars belief that many of the failures that were witnessed during the Westgate siege — including the late deployment of specialized police — were repeated in Garissa," Kenya's biggest-selling said. Sixty-seven people died in Al Shabaab's 2013 assault on the upscale mall.

Garissa was the deadliest attack on Kenyan soil since Al Qaeda killed more than 200 people in a 1998 bombing of the US embassy in Nairobi.