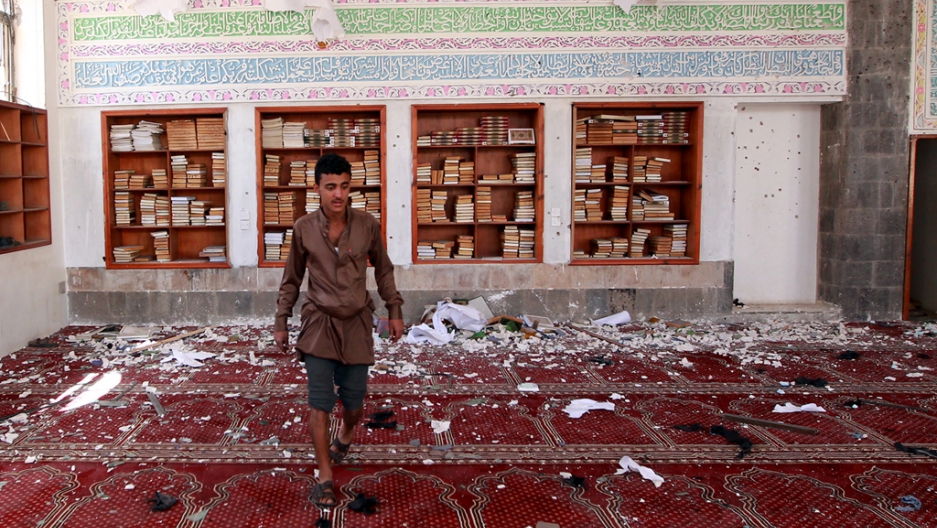 A Yemeni man inspects the damage following a bomb explosion at the Badr mosque in southern Sanaa on March 20, 2015.
Credit: MOHAMMED HUWAIS
Share

It sort of feels like things can’t get any worse in the Middle East and North Africa. But then every day things get so much worse.

The US government is desperately hoping for some success in its negotiations with Iran over its nuclear program. Two decades ago such a deal would have been a monumental reason to celebrate. But these days it might barely register.

That’s because the Islamic State continues its social media march around the world. It isn’t so easily giving up its real-world territory in Iraq and Syria, either. It’s expanding to Libya, a country that has gone all kinds of wrong since the optimistic toppling of strongman Muammar Gaddafi in 2011. The mess in Iraq just gets messier and there seems to be so little the United States can do about that one. The Syrian conflict is four years in and more than 220,000 people are dead.

And Yemen, the region’s poorest state, which has teetered on the brink for so many years now, appears to be finally succumbing to the proxy battle between Sunni Saudi Arabia and Shia Iran. The power struggle between these two is stoking hatred all over the region. Yemen is these days the pitiful manifestation of it all. On Friday, nearly 150 people were killed there in coordinated suicide attacks at mosques frequented by Shias. The Islamic State took responsibility for it, announcing itself in Yemen for the first time in its typically horrifying way.

Meanwhile, the Iranian-backed Shia rebels known as the Houthis continue to make their push south toward Aden and against the Saudi Arabia-backed Yemeni President Abed Rabbo Mansour Hadi, whom the United States also happens to like. It’s gotten so bad that the United States just pulled out most of its so-called “advisers” in the country. This means it now lacks much of the crucial intelligence-gathering needed to monitor and even stop terrorist attacks being planned by Al Qaeda (remember them?) based in Yemen.

All this and we haven’t even touched on Israel and Palestine, or Bahrain, or Egypt. It’s getting hard to see a way forward from all this.

Lee Kuan Yew, the founding father of Singapore, died over the weekend. He was 91.

Lee managed to turn Singapore from a British colonial backwater into a thriving financial center. And for that he is celebrated. But the man also ruled Singapore with an iron fist for three decades. He was a Southeast Asian strongman who suppressed public protest, the press and his political opponents. He also famously banned chewing gum.

But instead of driving his country into the ground like so many other autocrats, he lifted millions out of poverty and established one of the most successful states in the region.

“Much of this success is credited to Lee’s vision and policies. But in return for prosperity, its citizens have had to submit to a government that, despite occasional elections, functions as a one-party state with little tolerance of dissent,” writes GlobalPost Senior Correspondent Patrick Winn, who is based in the region.

Lee’s rule makes a fascinating study, and many world leaders have sought his advice over the years. To get a sense of his philosophy, here are seven things he actually said in real life. It’s kind of an amazing list.

Korean cuisine has arrived on the international scene, in no small part thanks to the tireless efforts of the Korean government. Korean authorities have pulled out all the stops to promote the country’s most popular dishes all over the world.

Just like it has supported the rise of its country’s pop music all over Asia and its technology all over the world, the South Korean government is peddling its food as well. The efforts include a maze of sometimes hilarious promotional campaigns and often questionable government-sponsored studies. Here are some of the best examples.