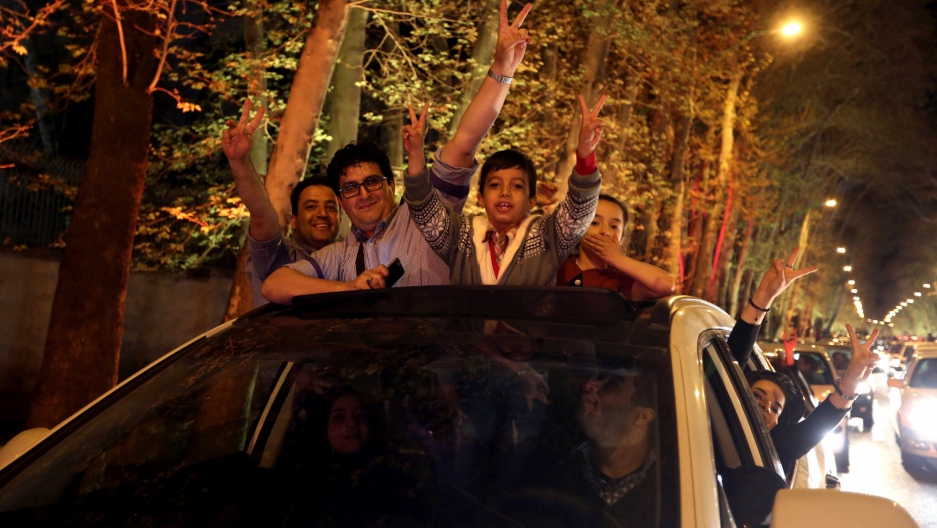 Iranians celebrate in Tehran on April 2, 2015, after Iran and the United States struck a deal to lift economic sanctions.
Share

They did it! Sort of. The United States and Iran have managed to agree on the basic tenets of a deal to limit Iran's ability to make nuclear weapons. In exchange, the United States and others will lift the economic sanctions that have nearly crippled the country in recent years.

Nothing is definite yet, though. Negotiators have a few more months to hash out some of the more difficult points. But all the same, the agreement is a major breakthrough and could go a long way toward improving relations between Iran and the West.

If it doesn't fall apart before the final deadline on June 30, it will also go a long way toward improving the lives of average Iranians, who have been suffering under the weight of sanctions. Inflation is out of control and Iranian buying power is almost nil. For the country's 70 million, it was beginning to seem hopeless. And then, for the first time in a long time, Iranian state television broadcasted an entire speech from US President Barack Obama. It was late Thursday night, and Iranians quietly celebrated the news.

It won't be easy lifting the sanctions. Some were passed by presidential decree, others by Congress. Some were levied by the European Union, some by the United Nations. It's kind of a mess. And there are still some serious issues to figure out, including what to do with Iran's stockpile of nuclear fuel. But if it can all be worked out by the end of June, it will mark a monumental shift in global relations.

In the end, after security forces killed the four gunmen, the massacre by Al Shabaab at a university in Kenya yesterday was one of the worst terror attacks in the country's history. Nearly 150 people were killed. That's almost twice as many as in the Westgate Mall attack a year and a half ago.

Al Shabaab is a terrorist group based in Somalia. For most of its history it confined its awfulness to Somalia, contributing to the country's status as a failed state. But in 2008, after an American airstrike killed its leader, a new leader emerged. He was Ahmed Godane, and he was more ambitious.

Al Shabaab militants soon took control of large parts of the country and — significantly — the key port city of Kismayo, where they commandeered a thriving trade in charcoal. The business earned them millions upon millions. Then, in 2011, Al Shabaab got into the business of kidnapping Westerners.

That really got everyone's attention. The United States launched more airstrikes, increasingly with the help of Predator drones. And the African Union assembled a force of some 17,000 soldiers drawn from neighboring countries, including Kenya. After a year of fighting, the Kenyan troops pushed Al Shabaab out of Kismayo in 2012, confiscating millions of dollars worth of charcoal.

Al Shabaab struck back in shocking fashion in September 2013 at the Westgate Mall in Nairobi. A year later, the United States again killed Al Shabaab's leader in an airstrike — this time Godane. He was replaced. Seven months later, the group carried out one of the worst terror attacks in Kenyan history.

The demilitarized zone, or DMZ as the kids call it, is a 160-mile-long buffer of landmines, guard posts, and barbed wire between North and South Korea. It is a potent symbol of division and suffering for citizens on both sides of the peninsula.

So naturally it's a great place for a wedding.

A South Korean couple has announced they will take the plunge near the DMZ in a Korean War-themed ceremony. The unusual choice for a destination wedding is meant to be a statement in support of Korean reconciliation.

The DMZ is actually not a bad spot to get married. After decades of little to no activity from humans, much of the area is covered in forest canopy. And it teems with wildlife.

But that's not where Lee Yo-sep and Choi Ji-hyeon are going to get hitched. No, instead, they've chosen as the location of their ceremony the bombed-out former headquarters of the North Korean communist party, which is preserved with bullet holes and other markings of war. Sounds romantic.