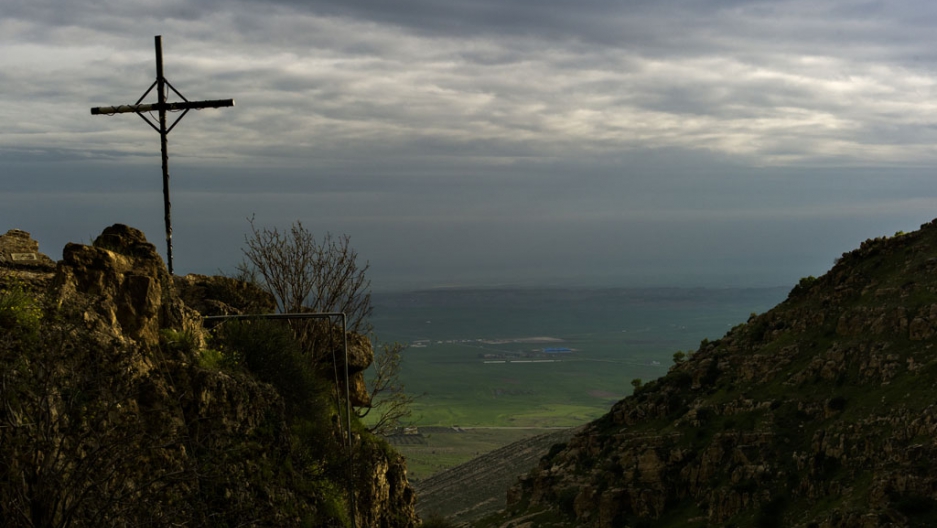 A cross at the St. Hormizd monastery overlooks Iraq's Nineveh plain and the frontlines of violence 20 kms away.
Credit: Dominic Nahr/UNHCR
Share

AL-QOSH, Iraq — At midnight mass on Saturday, the small churches in this ancient mountainside village were packed. Plastic chairs lined aisles and filled courtyards to accommodate the overflow crowds marking the Easter holiday with hymns and prayers late into the night.

With the front-lines in the fight against the Islamic State less than 20 km away, the past nine months have transformed this sleepy village into a jittery haven for Iraqi Christians. But the families sheltering here, distrustful of the Iraqi and Kurdish security forces and lacking confidence in the recently formed Christian militias, say this time they don’t expect to be able to return home.

“This year it’s kind of a sad holiday for us, but we are trying to celebrate,” said Samer, who he fled his home in Bashiqa with his wife Amira and son Oneil when Islamic State militants took over the town outside Mosul in early August. In Al-Qosh they live in a small, rented three-room home on a quiet narrow street, slowly depleting their savings and becoming more and more dependent on handouts.

“Honestly, I don’t see any light in the future, I don’t have any hope," Samer said flatly, explaining that unlike past crises in Iraq like the rise of Al Qaeda following the overthrow longtime dictator Saddam Hussein, this time is different.

Now, he says he sees an irreversible change in the way Iraqis think. “The mentality has changed,” Samer said. “I don’t see humanity in Iraq anymore. When you see me crying and you don’t cry with me, then what do we have?”

At the start of the crisis in June, local aid groups estimate over 1,500 families descended on Al-Qosh, more than doubling the small town’s population. Since then the numbers have dwindled to just over 500, but the strain is still visible. Some of the village’s ancient ruins have been converted into makeshift tents for the displaced and once a week long lines form in the town center as local charities handout dry foodstuffs.

“This isn’t the first time people are fleeing their homes in Mosul and other villages and coming here,” said Father Aram, an Al-Qosh native and pastor at Saint Qardaha church. In the past decade, he says he can remember half a dozen times when instability in Nineveh sent hundreds of families to Al-Qosh seeking shelter. “But this time,” he said, “it was like an exodus.”

Christianity has a rich history in Iraq that dates back some 2,000 years and includes some of the religion’s oldest continually inhabited communities. But the past decade has been devastating to Iraq’s Christian population. The number of Christians in Iraq now is less than half what it was in 2003, with millions choosing to migrate to Western Europe and the United States during the instability following the US-led invasion. The rise in power of Islamic State militants is just the latest blow.

Some Christians have responded to the current crisis by taking up arms. During Palm Sunday celebrations, Christian militiamen from the Nineveh Plains Protection Units lined main streets and walked alongside church processions. On Easter Sunday a militia checkpoint at the entrance to Al-Qosh turned away cars from out of town.

“Its been a while we’ve been preparing for this holiday,” said Nassir, 50, dressed in a black leather jacket, beige cargo pants and carrying a beat up rifle. “All the security you see here is from inside Al-Qosh, the current security situation doesn’t allow us to trust anyone from outside,” he said explaining why the town isn’t relying on the Iraqi military or police for security.

Behind him a shiny, new military green pickup truck flying a militia flag and decorated with olive branches, rumbled through a narrow street.

A boy crowd surfs while residents of Al-Qosh celebrate Easter.

Nassir explains he feels betrayed by both the Iraqi army and the Kurdish Peshmerga. Hey says he faults Iraqi security forces for largely abandoning their posts in Mosul as the Islamic State swept into Iraq in June. In the weeks following the IS takeover, Kurdish troops responded by moving into many of the Christian villages surrounding the city, promising to protect residents only to be quickly overpowered in a multi-front IS offensive a few months later in August.

As Nassir spoke he fumbled with his rifle’s shoulder strap, inadvertently pointing his gun’s barrel in the direction of a crowd of school children singing hymns. Laughing at his mistake he admitted he lacked any kind of formal military training, “I signed up just a week ago when they were announcing with loudspeakers that anyone who wants to can join.”

Along the town’s hilly streets residents and displaced families say they have full faith in the militias. “We feel completely protected,” said Iwan Massieh, 22, loitering in front of a church after mass with a crew of friends all sharply dressed for the holiday. “I’m proud to see these armed people because they’re protecting my town."

But behind closed doors some Iraqi Christians express doubts in the militia’s abilities.

“I don’t think they can protect us,” said an elderly man originally from Batniya who spoke on condition of anonymity for fear of reprisals. “We already had these same militias in Batniya and Tel Keif,” he said referencing another Christian village now under IS control. “And now, where are they? When we fled, they just fled with us!” He said he was appalled, explaining he served in the security forces under Saddam and knows what good training looks like.

“All these people here carrying their weapons, they can’t go to the places where ISIS is,” he said, “they cannot liberate anything.”

In the garden outside Samer’s rented home, he and his son visit with extended family as his wife tends a simmering pot of Pacha, their traditional Easter meal of cow intestines stuffed with meat and rice. A basket of dyed eggs sits off to one side as the men sip coffee and chat.

But despite the relaxed atmosphere, Samer admits he doesn’t feel safe.

“We just don’t have confidence in these people,” he said referring to the different armed groups fighting against IS, “they’re not a unified army, they’re each just trying to take what they want.”

This reporting was funded by UNHCR. Susannah George is a freelance journalist who has worked regularly for GlobalPost.