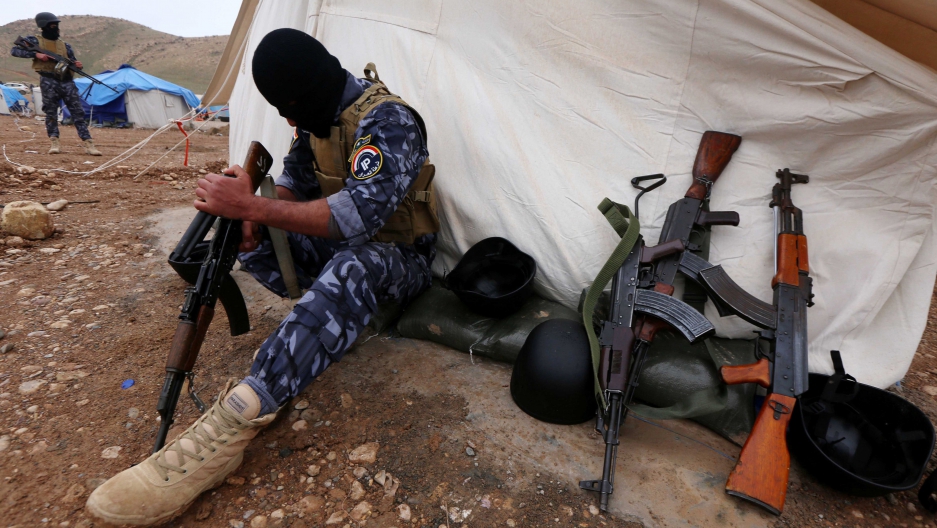 An Iraqi policeman cleans weapons at a training camp in the Bardarash district, 30 kilometers northeast of Mosul on January 10, 2015 as they prepare to recapture the northern Iraqi city of Mosul.
Credit: Safin Hamed
Share

KIRKUK, Iraq — ”The Iraqi army cannot take Mosul alone,” said a peshmerga commander, speaking at a base southwest of Kirkuk. “We will find out today if we will join the fight.”

As the leader of a brigade on the eastern frontier of the Islamic State’s territory, roughly 200km south of Mosul, the question of whether Kurdish fighters would join Baghdad in its highly anticipated offensive to retake Iraq’s second city was one the commander had been following closely.

The answer came a few hours later from Erbil, the capital of the Kurdistan region, where the Iraqi Prime Minister Haider al-Abadi was paying his first visit since taking office last year.

At a joint press conference with Kurdish President Massoud Barzani on Monday, Abadi announced that the Iraqi army would work together with the peshmerga to oust the Islamic State from Nineveh province, of which Mosul is the capital.

"Our visit to Erbil today is to coordinate and cooperate on a joint plan to liberate the people of Nineveh," Abadi said.

Barzani added: “We have reached consensus to cooperate in clearing the country of terror.”

The battle for Mosul was always going to be a tough one. The Islamic State (IS) took control of the city of more than one million people in June last year, and declared its caliphate shortly after. Since then, the majority Sunni city has become a stronghold for the group, home to the largest population under its control.

US officials estimated back in February that a force of around 25,000 Iraqi soldiers would take part in the operation for Mosul, and gave a timeframe of April or May. That date now appears to have been optimistic — but the meeting between Barzani and Abadi brings the offensive a step closer.

Nineveh province sits in the northwest corner of Iraq, stretching from the border with Syria to east of Mosul and covering both Iraqi territory and parts of the semi-autonomous Kurdistan region.

Until now, the Iraqi army and Kurdish forces have fought parallel battles against IS, with little coordination as they faced their shared enemy from different sides of the same frontline.

The Iraqi army, backed by Shia militias, has pushed north into IS territory from Baghdad. With the help of US airstrikes, the joint force recaptured the city of Tikrit from the militant group last week, a significant victory and one of the first major cities to be retaken in the government’s campaign to win back territory. Meanwhile, Kurdish forces man the frontlines to the north, in the Sinjar area, and to the west, around Kirkuk  — where they have also had success in recent weeks.

“We have had no cooperation with the Iraqi army,” said Jamal Mohamad Omar, another peshmerga commander operating in the Sinjar area of Nineveh province, to the west of Mosul, on Sunday. “They do not exist in this area. Maybe in upper level [ranks] there is some cooperation, but in the field the cooperation is not there.”

The lack of coordination between Baghdad and Erbil has complicated the fight against IS in Iraq. The frontline snakes east from the Syrian border to Mosul, then south toward Tikrit. A big push into the last IS holdouts in Sinjar by Kurdish forces, for example, would be difficult without a simultaneous push from Iraqi forces from the south.

“There are many parts to the front line, many sides,” said Mohamad Omar, ahead of the meeting in Erbil. “If [Iraqi and Kurdish forces] have a relationship it is better for both of us. Now we have Mosul surrounded from different sides, so if this continues it will be better.”

Even if the Islamic State’s various enemies present a united front, the battle for Mosul will probably be a messy one.

It is unlikely the city will be recaptured without significant air support from the US-led coalition currently supporting anti-IS forces in Syria and Iraq. The Syrian city of Kobani was largely leveled by coalition airstrikes in the offensive to recapture it from IS in January. Heavy bombing in a city as densely populated as Mosul is likely to result in high civilian casualties.

There is also the added humanitarian crisis that will inevitably follow such a large operation. Aid agencies told The Independent last month that an offensive against Mosul could send “hundreds of thousands” fleeing, exacerbating an already severe refugee crisis.