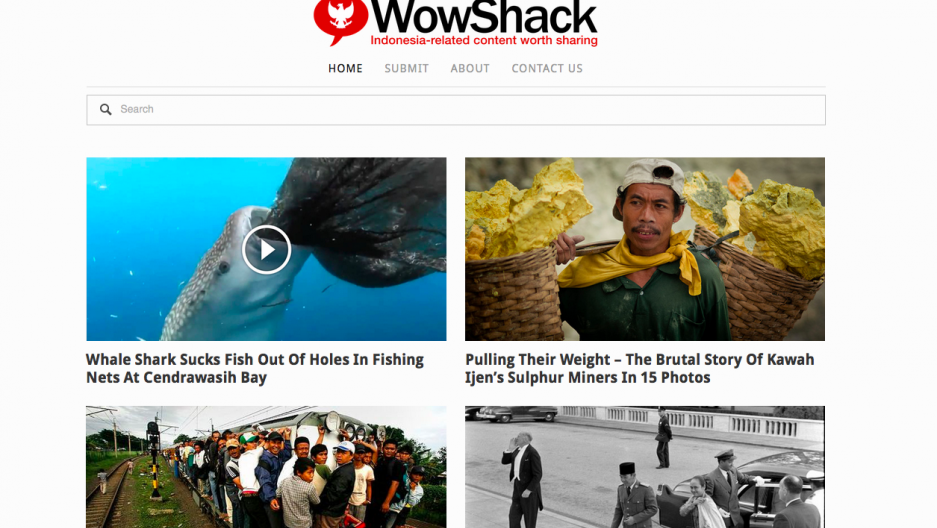 The homepage of WowShack, Indonesia's answer to Buzzfeed.
Share

JAKARTA, Indonesia — Want to know what US President Barack Obama’s Indonesian doppelganger looks like? What about Indonesia’s accidental hipsters? Cockfighting in Bali? Indonesian street food gourmet style? Justin Bieber and the Indonesian president taking a selfie? Alright, maybe not the last one. But you definitely can’t say no to baby Komodo dragons or Sumatran tiger cubs.

This is some of the stuff you’ll find on WowShack, Indonesia’s answer to Buzzfeed. The website was founded by four high school friends last November, and already attracts millions of unique visitors a month. Sure, it’s nothing close to Buzzfeed’s 160 million-plus a month, but they’re just getting started. And Indonesia is the perfect market.

The four 23-year olds — two Indonesians, one Australian and one Brit who all grew up in the Indonesian capital Jakarta — launched the website “for fun.” They’re not journalists or social media specialists, and they all have jobs in unrelated fields (which is why they asked to remain anonymous). They’re just, as one of WowShack’s founders laughs, “very good at stalking the Indonesian internet,” and picking out what they think has the potential to go viral.

Indonesia’s market for viral content is massive. The country is home to 250 million people, 83 million of which are internet users. It is one of the fastest growing markets in the world. There are more than 50 million active smartphones users. And that number is expected to double by 2018.

And the truth is, Indonesians love sharing stuff online — instant messaging, taking and sharing selfies (Indonesians pretty much invented the selfie stick, which tells you something). Jakarta is the number one tweeting city in the world, which some argue is because it is also the world’s number one city for traffic congestion.

When Indonesians get excited about something on Twitter, it’ll often make it to the top of worldwide trends in just a few hours. Recently, the hashtag #coinforAbbott, an online campaign to repay Australia’s tsunami aid after Australian Prime Minister Tony Abbott linked it to the fate of two Australians on death row in Indonesia, was trending for days.

“Most Indonesians only use the internet for social media and messaging,” says Amir Karimuddin, editor in chief of Daily Social, Indonesia’s leading tech blog.

Facebook counts some 69 million monthly active users in Indonesia, Twitter says it has around 20 million, and actually just opened an office in Jakarta.

Karimuddin says online media has the potential grab hold of this obsession with social media and take off. “The internet is already the second source of information, after television. But for now, people only follow mainstream media,” he said.

At the moment Buzzfeed-like websites are few and far between in the country, and WowShack might be the only website dedicated to “Indonesia-related content worth sharing,” as it describes itself. The four friends know that attracting even a small portion of Indonesians online would still mean reaching millions of visitors.

“This is the time to get in,” one of them said.

The website follows the codes of Buzzfeed. You’ll find plenty of listicles, quizzes and headlines you can’t resist clicking on.

They tackle fun and typically Indonesian facts, like things you’ll only see on the streets of Jakarta:

Massive flooding in Jakarta, Indonesia's capital, is common during the rainy season.

BNI is the name of a nationwide bank in Indonesia.

They showcase incredible Indonesia (not just Bali) — for example with these 34 pictures of the archipelago’s 34 provinces.

And they want you to learn about the country, through maps, crazy stats, or terrifying tongue twisters. Just so you know what you’re getting into, here’s one: “Kuku kaki kakak-kakak ku kayak kuku kaki kakek-kakek ku.”

WowShack isn’t only after a growing share of Indonesia’s social media users, they see themselves as unofficial ambassadors.

“Indonesia is so diverse, so beautiful, so crazy, and so not like anywhere else in the world,” one of the friends says. In the eyes of many outsiders, “Indonesia is just a third-world country they don’t really want to know about.”

“Indonesia is not seen as sexy. This has to change.”