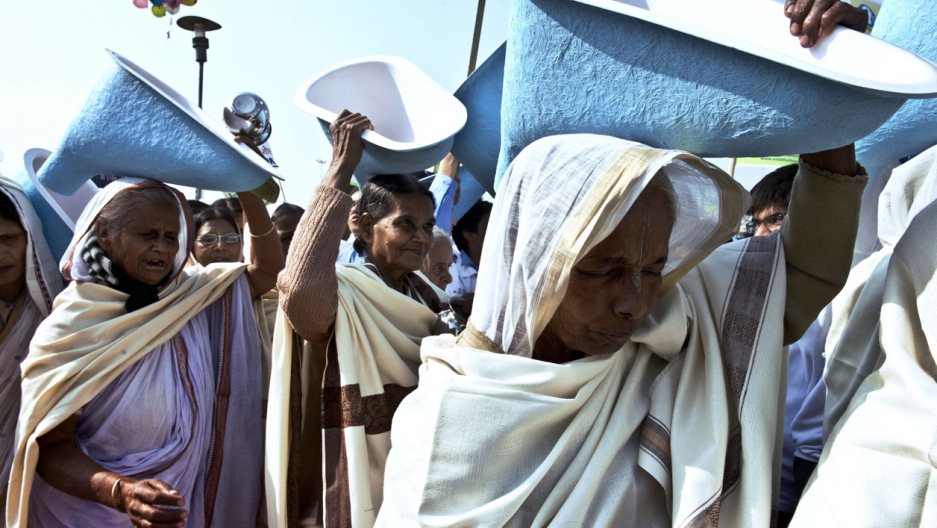 Indian women hold toilets as they participate in the opening ceremony of the three-day International Toilet Festival in New Delhi on Nov. 18, 2014, the eve of World Toilet Day.
Share

NEW DELHI, India — You could call it India's Toilet Revolution.

These days, government inspectors on the subcontinent armed with pencils, tablets and smartphones have been out in force, combing the countryside — on the hunt for toilets, or rather the lack of them.

The effort is part of the Clean India Campaign launched late last year by Indian Prime Minister Narendra Modi, a business-friendly reformer who has pledged that every Indian household will have a toilet by 2019.

But custom, corruption and a plain old preference for nature has gotten in the way of Modi's Marshall Plan For Toilets.

“We have had a huge problem in the past with what we call ‘ghost toilets,’" said Sandhya Singh, an official at the Ministry of Drinking Water and Sanitation.

"The government has given money to build latrines but we remain unsure whether they have been built at all, or are reported as being built,” Singh added. “We have also sunk funds into toilets that are not functional anymore.”

Singh and other ministry bureaucrats are recording the locations and snapping photographs of commodes to ascertain whether they are working and used regularly. The effort is immense.

“We have set up a database where volunteers and officials can update all the information in real time,” Singh said. “We are insisting on photographs to ensure no facility is reported twice. So far, the database already has information about a 100,000 rural toilets.”

Few leaders of great nations can count toilets among their top priorities. But Modi is pursuing a goal that gels with his aim of boosting India’s economic might to a level befitting the second-most populous country on Earth.

A World Bank Report released last year found that poor hygiene stemming from a lack of toilets resulted in around $53.8 billion in lost economic activity in India in 2006. That was equivalent to about 6.8 percent of the country’s gross domestic product at the time.

Lack of proper sanitation facilities increases the prevalence of parasitic worm infections and diarrheal illnesses that can be fatal.

The prime minister has a herculean task ahead of him. Nearly 70 percent of all households in rural India lacked a toilet in 2011, the World Bank reported recently. Two years ago, the World Health Organization and United Nations jointly estimated that 620 million people, or around half the population of 1.2 billion — regularly defecated in the open.

A study published recently in the Mumbai-based Economic and Political Weekly, found that nearly 40 percent of those who go outdoors when nature calls said they preferred to defecate in the open. The survey focused on 3,235 households in rural India.

“Our data predict that if the government were to build a latrine for every rural household that lacks one, without changing sanitation preferences, most people in our sample in these states would nevertheless defecate in the open,” the study found.

Indians surveyed in the study said they found open defecation to be more “comfortable and convenient” than using a toilet. "Many respondents told us that defecating in the open provides them an opportunity to take a morning walk, see their fields, and take in the fresh air,” wrote the study’s authors. “Many people regard open defecation as part of a wholesome, healthy, virtuous life.”

Bindeshwar Pathak, who runs the largest sanitation charity in India, Sulabh International, agreed with the study’s findings. Often referred to as the “toilet guru” of India, the 71-year-old has built thousands of latrines in the country. He believes Modi’s vision is laudable but requires a large-scale awareness campaign to succeed.

“Who will implement this toilet scheme? Who will educate and motivate?” he asked. “We need an army of volunteers who will go from house to house and talk to people about hygiene, and educate them about the health benefits of using toilets.”

Pathak noted that similar efforts have worked on other sensitive subjects. “It’s not an easy task in conservative India to talk to women about menstrual hygiene, so we will have to train people and also compensate them,” he said.

“Community action and generation of peer pressure on the outliers are the key,” according to campaign literature. “Open-defecation-free villages cannot be achieved without all the households and individuals conforming to the desired behavior of toilet use, every day and every time. An army of ‘foot soldiers’ or ‘Swachhata Doots’ on sanitation could be developed and activated.”

But the foot soldiers will need to spend time in the villages, Pathak said. They can’t swing through and expect people to change how they go to the bathroom overnight.

“We can definitely achieve the target to be a 100 percent open-defecation-free country by 2019 provided we arm people with knowledge,” he said. “The government usually just stops after building toilets, but they will have to be more realistic and look into monitoring and maintenance.”