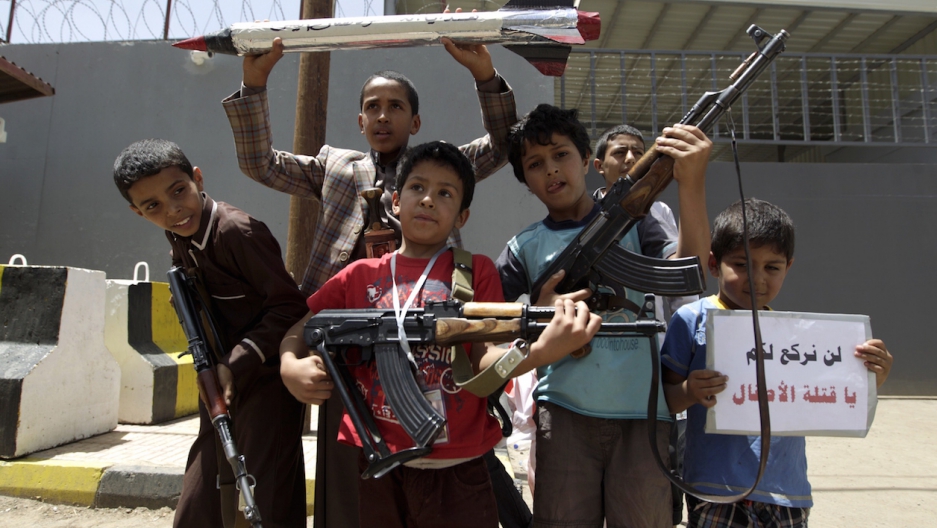 Yemeni children pose for a photo during a protest in front of the United Nations office in Sanaa on April 13, 2015 against a strike by the Saudi-led coalition the previous day.
Share

The situation in Yemen is pretty terrifying right now.

Three weeks ago, a Saudi-led bombing campaign began battering the country. It's since created a major humanitarian crisis, displacing an estimated 150,000 Yemenis and making the country's famine even worse.

Long-simmering ethnic tensions boiled over in March as Shiite Houthi militants forced President Abed Rabbo Mansour Hadi, who has been backed by predominately Sunni Saudi Arabia, to flee the country. Estimates count at least 600 dead and another 1,700 injured since the Houthi rebels began their offensive. The death toll continues to climb — some hospitals can't even keep count anymore.

The United Nations Security Council has called for an end to the violence and imposed an arms embargo, but that hasn't deterred the warring factions fighting for control of this tiny nation, home to one of the most important ports in the world.

GlobalPost spoke with Marie Claire Feghali, a spokeswoman for the International International Committee of the Red Cross working in Yemen, to get a better sense for how the situation has devolved.

GlobalPost: Describe the situation on the ground in Yemen.

"In parts of the south, like Aden, the hospitals have been overwhelmed for weeks."

Marie Claire Feghali: The humanitarian situation is very difficult. You have the ground battles that have been ongoing for a very very long time. In parts of the south, like Aden, the hospitals have been overwhelmed for weeks. There are shortages of food and water and fuel. The ambulances of several hospitals have been stolen by various armed groups, and people are afraid to go out because of the fighting and the snipers.

What's happening in the capital, Sanaa?

Essentially we are seeing many airstrikes, but the capital is running out of water. Like the rest of the country, it has food and fuel shortages. The price of basic food has increased. It's a difficult situation overall because Yemen imports about 90 percent of its food.

In your estimation, what is the most immediate need right now?

Medical supplies. The medical health system is extremely strained right now. Several days ago, we started bringing in supplies by plane. We've also brought in a medical surgical team that arrived by boat.

How will you distribute the supplies given how bad the security situation is?

We are doing the transportation by the ground because the airports are closed. We have been able to operate pretty freely. The airstrikes have become an additional factor to account for. We have to inform the [Saudi-led] coalition of our movements, but that is not a problem. We have no problem at all accessing any place in Yemen as the ICRC.

Are there areas that have been harder hit by the conflict than others?

The situation is difficult for everyone. All the seaways and airways are closed. People cannot move. People are trapped in Yemen, and they cannot leave. There are people who want to move to a safer place and cannot go.

Workers from the International Committee of the Red Cross (ICRC) stand on the tarmac as emergency medical aid is offloaded from a plane following its arrival at the international airport in Sanaa on Apr. 10, 2015.