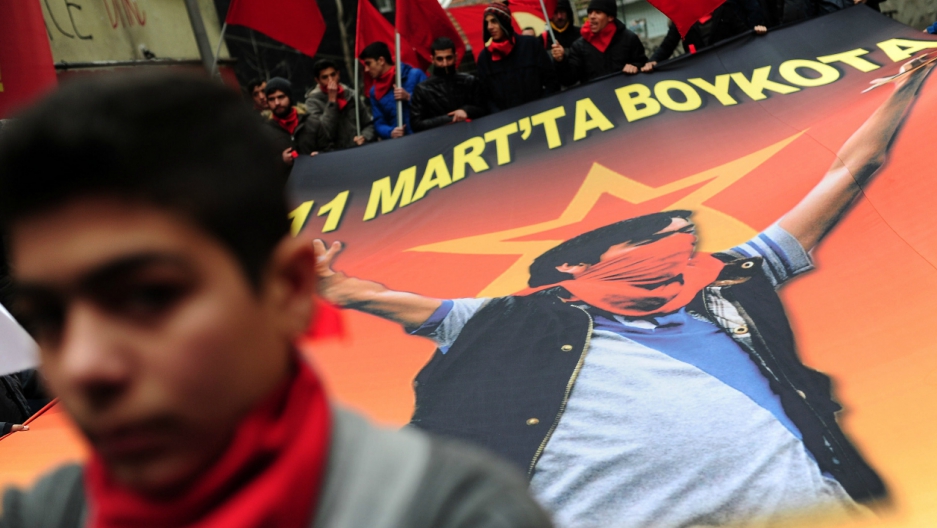 Demostrators hold a poster of Berkin Elvan during a rally in Istanbul on March 7, 2015 as thousands of people marched to mark the first anniversary of the death of the youngest victim of the Gezi Park protests.
Credit: OZAN KOSE
Share

ISTANBUL — A far-left Turkish group took an Istanbul prosecutor hostage on Tuesday and threatened to kill him, prompting special forces officers to enter the courthouse and police to evacuate the building.

The Revolutionary People's Liberation Party-Front (DHKP-C) published a picture of the prosecutor with a gun to his head and said it would kill him unless its demands were met.

The prosecutor is leading an investigation into the death last March of 15-year-old Berkin Elvan, who died after nine months in a coma from a head wound sustained during anti-government protests.

The DHKP-C said on its website it wanted the police officer it blames for Elvan's death to confess on television, the officers involved to be tried in "people's courts" and charges against those who attended protests for Elvan to be dropped.

Prime Minister Ahmet Davutoglu met with the current and former interior and justice ministers at the ruling AK Party headquarters in Ankara to discuss the situation, officials in his office said.

Television footage showed special forces officers entering the courthouse and officials being escorted out. Armed police officers, many wearing flak jackets, surrounded the building and fire engines were positioned outside.

The United States, European Union and Turkey list the DHKP-C as a terrorist organization. It was behind a suicide bombing at the U.S. Embassy in 2013. In 2001, two policemen and an Australian tourist died in a DHKP-C attack in central Istanbul.

(By Osman Orsal; Additional reporting by Humeyra Pamuk in Istanbul and Gulsen Solaker in Ankara; Writing by Nick Tattersall; Editing by Robin Pomeroy)