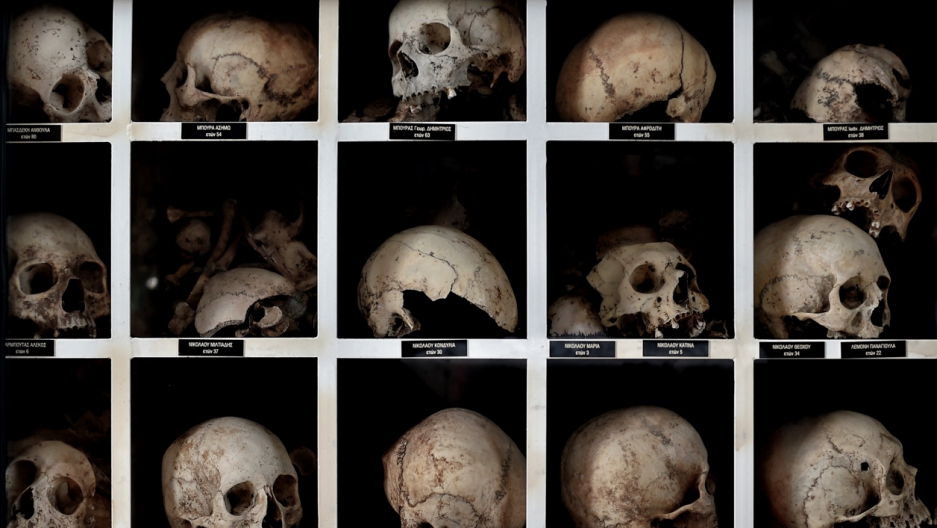 Skulls of the victims of the Distomo massacre. A small town in central Greece, Distomo has become the symbol of atrocities committed by Nazi troops as they pulled back to Germany in the wake of the Allied Normandy landings in the summer of 1944. A quarter of Distomo's population died — 218 people including infants and pregnant women who were disemboweled.
Credit: Aris Messinis
Share

The timing couldn’t be more convenient.

With a Greek exit from the euro zone looking more likely, the cash-strapped country appears to be trying to turn the tables on its financial foe Germany by claiming Europe’s largest economy still owes it billions of dollars in reparations for the Nazi occupation during World War II.

Just days before Athens has to make a roughly $487 million payment on a loan from the International Monetary Fund (IMF), Greece’s financial wizards inside the General Accounting Office calculated for the first time, at least publicly, the exact sum of money owed by Berlin: $302 billion, including a forced loan of more than $11 billion.

That’s a lot of money — and it just happens to be more than the $260 billion bailout Greece received from the European Union and IMF in 2010 to stop from going bankrupt.

That would go a long way toward repaying Greece's $350 billion debt.

Germany, of course, says the issue of war reparations was settled a long time ago and bringing it up now is a "dumb" attempt to distract attention from Greece's looming credit crunch.

More from GlobalPost: Is it so wrong to sell Nazi toys? Moscow says so

But Greece claims Germany's compensation payment in 1960 — a fraction of what Athens had sought — did not cover the atrocities and destruction of property committed by Nazi soldiers or the billions of dollars that the Bank of Greece was forced to lend to the enemy.

Whether Greece is legally entitled to more reparations isn’t clear. What is certain is that Athens is feeling increasingly desperate and is blaming Germany for its current predicament.

Here's a reminder why.

In return for the gradual disbursement of the $260 billion bailout, Greece's former government pledged to introduce tough austerity measures to get its finances in order.

Germany, the biggest single contributor to the bailout and therefore the one with the most to lose, has been playing hardball to force Greece to meet its commitments, which include slashing salaries for the public sector and introducing higher taxes. Berlin's hardline approach has turned it into Public Enemy No. 1 among the Greek public.

The schism between the two countries widened this year following the election of the Syriza government in January, which vowed to end the “vicious cycle of austerity” that many Greeks blame for crippling the country’s economy and causing massive unemployment.

Greece is currently locked in negotiations with EU finance ministers, including Germany’s no-nonsense bean counter Wolfgang Schauble, over the economic reforms it must implement in order to unlock the funds it needs to meet its debt repayment obligations.

The talks are not going well and the war reparations claim has not helped a bit.

Schauble, who has made little attempt to conceal his contempt for the Syriza government, has accused Greece's new leaders of wrecking the trust built up under the previous administration.

“The new Greek government has totally destroyed the trust of its European partners … this is a serious setback,” Schauble said last month.

“Until November, Athens was on a road that could have lead it to exit the crisis. This has gone. I don’t know what to do now with Greece.”

He also said a Greek exit from the euro zone could not "be ruled out.”

Greek Prime Minister Alexis Tsipras has accused Germany and other EU countries of “blackmail” and now appears to be courting Russia and China for financial help.

How this ends is anyone's guess.