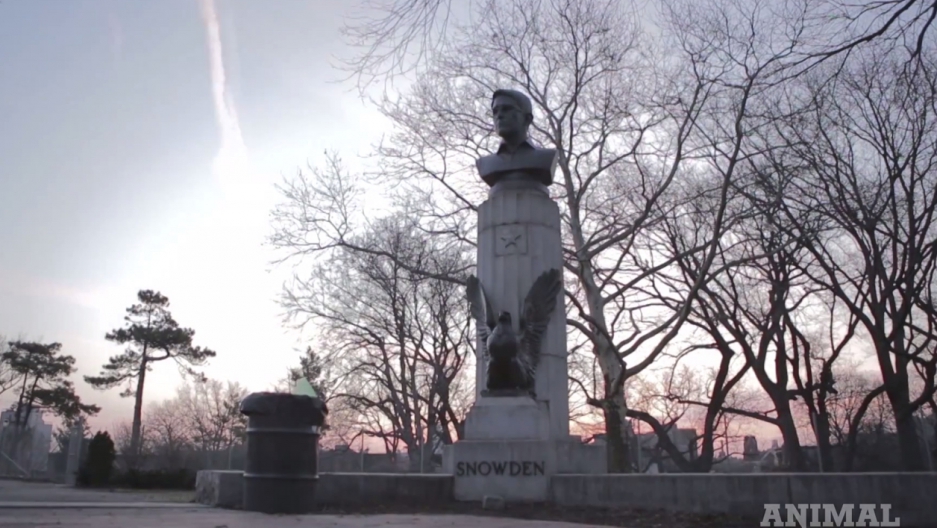 Edward Snowden was on John Oliver's TV show this weekend, but that wasn't his only surprise appearance.

In case you missed it — and if you did, it means you haven't spent much time on the internet today — the NSA whistleblower showed up Sunday on "Last Week Tonight with John Oliver," where he described NSA surveillance in a way that Americans can understand. Dear America, he explained, the feds can see your "dick pics."

Meanwhile, as the internet talked about the bulk collection of "junk," three artist activists in Brooklyn were stealthily installing an enormous shrine to the NSA whistleblower in Fort Greene Park.

The project was a collaboration between two NYC-based artists and a West Coast sculptor, according to an exclusive story by ANIMALNewYork. The artists built a 4-foot-high bust, 100-pound bust of Snowden's head — complete with his signature eyeglasses — and attached it to a column that formed part of the Prison Ship Martyrs Monument, a memorial to Revolutionary War soldiers.

The artists released a statement to explain why they did it:

Fort Greene’s Prison Ship Martyrs Monument is a memorial to American POWs who lost their lives during the Revolutionary War. We have updated this monument to highlight those who sacrifice their safety in the fight against modern-day tyrannies. It would be a dishonor to those memorialized here to not laud those who protect the ideals they fought for, as Edward Snowden has by bringing the NSA’s 4th-Amendment-violating surveillance programs to light. All too often, figures who strive to uphold these ideals have been cast as criminals rather than in bronze.

Our goal is to bring a renewed vitality to the space and prompt even more visitors to ponder the sacrifices made for their freedoms. We hope this inspires them to reflect upon the responsibility we all bear to ensure our liberties exist long into the future.

The overall effect is pretty stunning. According to ANIMALNewYork, the bust, column, and base seem to belong together. "Both the color and design of the bust expertly matches the existing sculptures there," Bucky Turco writes, "from its bronze patina finish to Snowden’s hair — which mimics the texture of the feather on the eagle."

The artists expect that the city will remove it, so they were careful to install it using an adhesive that allows for easy, damage-free removal.

Early this afternoon, the New York City Parks Department removed the letters spelling "Snowden" at the base of the column and covered the statue in a tarp.

A Vine user filmed the cover-up.

A spokeswoman for the department told Mashable that they were "looking into" the sculpture's removal.

Update 2: Now it's a hologram!