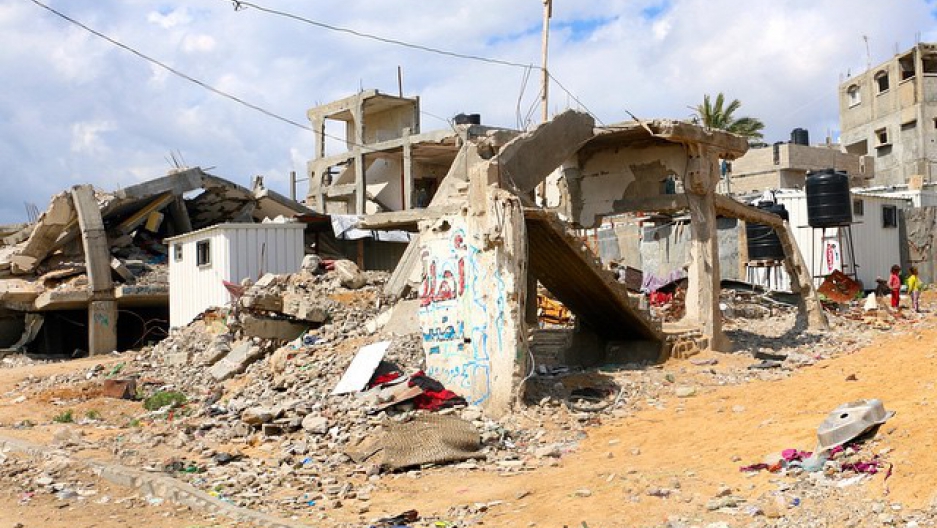 GAZA CITY — Seven months on, Gaza looks much as it did just after Operation Protective Edge, which left more than 2,000 Palestinians dead and the small territory covered in 2.5 million tons of rubble. The destruction has become part of the landscape. People move around, over and through it without a second glance.

Children in Beit Hanoun collect bits of rubble to sell to factories in #Gaza. Much of the destruction from last summer's offensive remains and UNRWA has had to stop providing financial aid for families whose homes were destroyed to rent apartments and for home repairs.

A man on his bike undeterred by stormy skies and destruction on either side of him in Beit Hanoun, #Gaza

Over 100,000 people are still homeless and less than 5 percent of the $5.4 billion dollars pledged in aid has reached the Strip. At the end of January, after a shortfall of $585 million, the UN agency for Palestinian refugees had to stop providing rent subsidies to Gazans who had lost their homes as well as assistance to families whose homes are in need of minor repairs. These cuts affect around 80,000 Gazans and may mean that some families have to move back into UNRWA schools where some 10,000 displaced persons are still living.

Some temporary shelters in #Gaza where over 100,000 people are still homeless 7 months after Operation Protective Edge

Husband and wife, Hanadi and Sabry al-Najjar stand in a portable cabin issued to them after their home in Khuzaa was destroyed during this summer's offensive in #Gaza. Hanadi, age 30, developed cancer soon after she was exposed to white phosphorus during Operation Cast Lead in 2008 and 2009. Ill and now displaced she can no longer care for her six children and has placed them in an orphanage where she and Sabry visit them once or twice a month when they can afford it.

In February, the anonymous street artist Banksy left his mark amidst Gaza’s rubble, once more turning the world’s attention to the besieged area.

Men on a motorcycle pause to look at Banksy graffiti in Beit Hanoun, #Gaza

In the absence of formal assistance, people are trying to mend their homes as best they can.

But the deepest wounds wrought by the offensive are those you can’t see and will persist long after homes have been rebuilt and life has returned to what passes for normal in Gaza. Over 400,000 children are in need of psychosocial support following the offensive. The majority of children in Gaza exhibit symptoms of PTSD and the repeated trauma that stems from waves of bombardment, combined with inconsistent access to care, reduce the chances that they will ever recover.