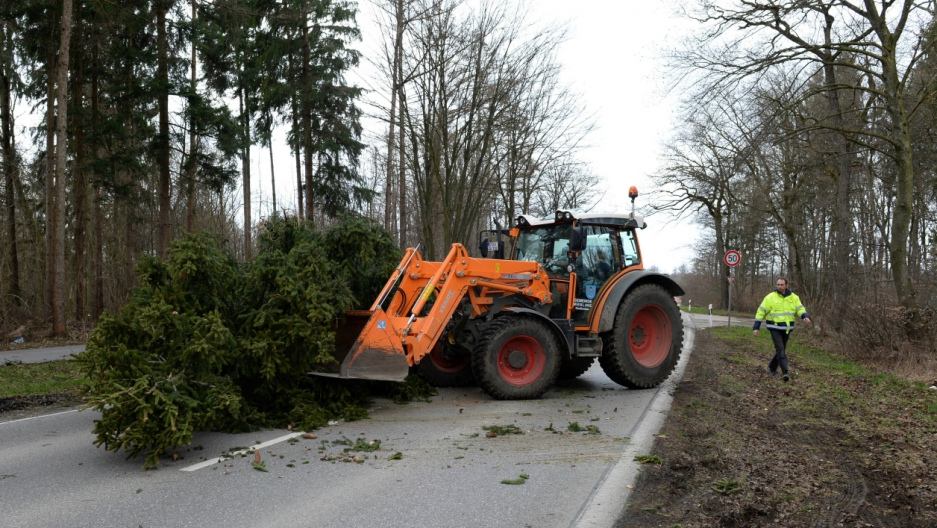 HAMBURG, Germany — At least four people were killed on Tuesday when hurricane-force winds lashed across northern Europe in one of the most severe storms in years, forcing flights to be canceled and disrupting road, train and marine traffic.

The Dutch meteorological office issued a red warning for the northern and coastal provinces of the low-lying Netherlands, as gusts of up to 75 mph caused damage estimated at several million euros.

"This is one of the worst storms in recent years," he said, noting that such hurricane-force winds were highly unusual for this time of the year.

Two road workers were killed in the western region of Rhineland-Palatinate when a tree fell on their vehicle, while another man was crushed under a stone wall in front of his house near Magdeburg in eastern Germany.

The fourth victim was killed in the eastern Dutch town of Ede after the roof of a warehouse fell on him.

At Rotterdam, Europe's largest port, two container terminals were closed, with ships forced to queue out at sea. A spokesman said this was a routine precaution when winds rise above gale force seven. Bulk liquid terminals continued to operate.

Dutch authorities warned freight drivers not to travel with lightly loaded vehicles after overturned trucks blocked roads, while in the north some bridges had to be closed.

Near the port of Vlissingen on the Belgian border, authorities were able to refloat a 1,000-foot container ship that ran aground.

In Germany, train services were suspended in the northern states of North Rhine Westphalia and Lower Saxony and were disrupted as far south as Bavaria.

In Britain, winds gusted up to 97 mph overnight, with a major bridge over the River Thames closed for several hours because of the bad weather, causing long traffic delays.

In Belgium, the wind uprooted trees and cut power lines to hundreds of homes. In some places, cars and buildings were damaged by flying debris. Some rail and road links were briefly obstructed.