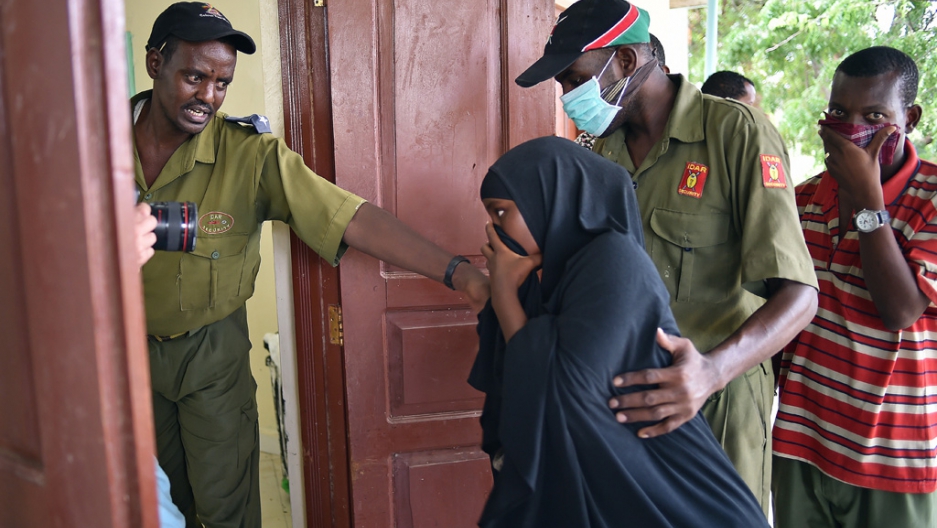 People cover their noses as they arrive to view the bodies of the suspected attackers on a university at the Garissa mortuary in the northeastern town of Garissa, on April 4, 2015.
Credit: CARL DE SOUZA
Share

GARISSA, Kenya — Daisy Onyango was onto them. The gunmen going room to room at the university dorm said people who came out of their hiding places would be safe. She knew it was a trick.

But it wasn't until she heard the pleas of women about to have their throats slit, that she knew she was never coming out alive.

Onyango heard screams and men were told to kneel. Then there was gunfire. “Their faces were covered and they were ordering everyone out,” Onyango recalls of the gunmen.

She, like everyone else at Garissa university in northern Kenya, awoke at 5 a.m. on April 2 to the sound of gunfire.

“Those who tried to escape were shot dead immediately,” Onyango said, so she and five others crawled under her bed and listened as gunmen claiming to be from Somalia's Al Shabaab terror group, murdered at least 148 students.

Onyango recalls the horrifying events from a camp set up for survivors in Garissa, where she sits among hundreds of others students, speaking rapidly and trying to process the deadliest terror attack on Kenyan soil since the bombing of the US Embassy in 1998, which killed 213 people.

The only reason she survived, she thinks, is because her tiny dorm room looked like a toilet, and there were so many bodies piled up by the door that it wasn't possible to get out. She could see the army from outside her window, but all she could do was lie on the ground and listen.

Witnesses say the attack on Garissa university was marked by new levels of cruelty, even for Al Shabaab, which is affiliated with Al Qaeda. The gunmen cackled, witnesses said, and they lured women from their hiding places by telling them that the Quran forbids the killing of women, before killing them.

“They separated the ladies from the gentlemen and started asking for Muslims,” Onyango said. “If you claimed to be a Muslim, you are asked some few questions. If you pass the test, you are allowed to go. If you failed, you were shot dead.”

Onyango said it sounded like they took about 30 hostages. “I could hear them torturing these hostages as they were crying. Some were screaming, some were crying, begging, and some were told to call their parents” before they were shot.

Other survivors say the message given to parents was that they were being killed because of Kenya's refusal to pull troops from Somalia, where they have been fighting Al Shabaab for years and where they have coopted the group's lucrative charcoal trade.

At one point, Onyango heard one of the gunmen speak on the phone in Swahili, Kenya's national language, not the Somali language they had been using between them.

“I could hear one of them speaking on the phone saying I have some few hostages here, they are all women, and I don't know what to do with them."

The order was clear: kill them. And the shooting started again.

​At about 6.30 p.m., Onyango heard the army enter and fire a few shots. Some 13 hours after the attack started, she finally crawled out from under the bed.

Dr. Bashir Abdiweli, who works for aid group Doctors Without Borders (Medecins Sans Frontieres), has been treating scores of people for gunshot and blast wounds, as well as cuts from people who hurled themselves through barbed wire and glass to escape.

Abdiweli works in a hospital where some are screaming as they have flashbacks, and others have been stunned into silence.

"Some are so shocked they cannot narrate anything," he said.

The reaction among Kenyans ranges from calls to prayer, to angry outbursts about how the government let this happen again, less than two years after Shabaab laid siege to the upmarket Westgate mall in the capital Nairobi, killing at least 67 people.

Universities were put on high alert  March 25, but one student, who asked to go by her first name Katherine, said the notices only went up in Garissa on April 1, and she and her friends "thought they were fooling" as an April Fools' Day prank.

Kenny Mwangi, another student, says  he transferred from Garissa to Nairobi at Christmas, without even doing the end of term exam, because he felt unsafe. "They only had two policemen," and there was electric wire around only one dorm, which he says is the dorm the gunmen took over.

Two days after the attack, Interior Minister Joseph Nkaissery said that the killing of civilians was meant to "humiliate the government" and Kenya would not pull troops from Somalia. Shabaab promised to make cities run "red with blood."

But in a switch from hard targets to soft, Al Shabaab promised in their emailed statement that the blood spilt would not be from other armed men.

"This will be a long, gruesome war of which you, the Kenyan public, are its first casualties," the statement said.