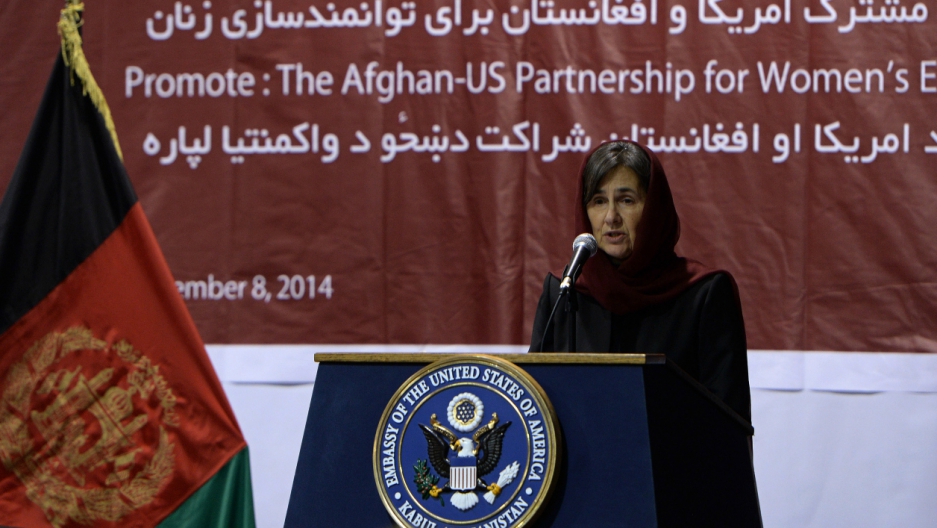 Afghan First Lady Rula Ghani speaks during an event for empowering Afghan women at the US Embassy in Kabul on November 8, 2014.
Credit: WAKIL KOHSAR
Share

WASHINGTON — Afghanistan is at a crossroads. After taking office in a close election last year, President Ashraf Ghani has struggled to form a government and build a solid partnership with his political rival, Abdullah Abdullah, who was appointed chief executive officer in a power-sharing compromise.

Ghani ran as a reform candidate. He promised to reform policies, institutions and public discourse. On the key issue of women’s rights, he is trying to live up to his pledge.

After a woman was beaten and set on fire for allegedly desecrating the Quran, President Ghani ordered an investigation. He said, “No individual is allowed to make oneself a judge and use violence to punish others.”

An arrest in the case was an important signal his government would no longer tolerate violence against women or pursuing vigilante justice in the name of Islam.

On March 21, the eve of his first official visit to the United States, President Gahni announced 16 new cabinet nominees that included four women. This encouraging step is in line with an earlier commitment to appointing women in senior level positions of government.

These respected, pioneering Afghan women leaders will serve as advisers during President Ghani’s trip and help keep women’s empowerment squarely on the agenda.

Rula Ghani, the president’s wife, has been a crucial ally and spokesperson in the government’s outreach to women. On a visit to Washington in February, she explained how she sees herself as a “listener.” She has pledged to hear the grievances of ordinary Afghans, especially women, to enable her to help devise solutions on issues such as unemployment or access to basic services.

This is a remarkable turn of events. Rula’s public leadership stands in stark contrast to that of her predecessor, Zeenat Karzai, who was rarely seen and did not campaign for her husband.

Rula’s words and actions are sanctioned by the new president. He has supported her participation in international conferences where she has repeatedly spoken on the need for women’s empowerment in Afghanistan. With his encouragement, Rula has created new initiatives to connect Afghan women and youth to resources that can improve their lives.

Her messages have been sensitive to local culture. She has sought to inspire Afghan citizens participate in civic action. She routinely refers to historical examples of Muslim women leaders, including from the time of Prophet Muhammad, which makes it difficult for naysayers to accuse her of espousing Western or un-Islamic beliefs and traditions.

She is highly educated, dignified and charming. She is creating a model for young Afghan women who are trying to find their own voices.

President Ghani’s rhetoric and recent actions, along with his wife’s public persona, provide reasons for cautious optimism about the government’s commitment to women’s rights.

It is clear, however, that the ultimate measure of progress will be access to higher education for common Afghan women, freedom to exercise their productive potential in the formal economy, hold leadership positions in government and civil society and participate in the all-crucial peace process.

As anticipation rises for the prospect of negotiations with the Taliban, a fundamental question remains: what about Afghan women and girls? Will their rights be bargained away in a peace arrangement with the Taliban? Will they be invited to share their perspectives as part of the dialogue and hold decision-making positions?

In February, Rula said, “If peace and reconciliation with the Taliban happens, you can be sure that women won’t lose their rights. … My husband won’t allow that.” But, she also acknowledged, “Whether or not women will be at the table, I don’t know.”

The High Peace Council is currently comprised of 61 men and only nine women. Moreover, the daily insecurity that women face — especially in rural and remote areas where they continue to be marginalized — is an issue of grave concern.  Women must be safe and free in their homes, in their communities and beyond to live as full and equal citizens.

The simple reality is that Afghanistan cannot move forward if half its population is left behind. The well being of the Afghan women — including the protection of their rights as well participation in political and socioeconomic life — will be vital to ensuring democracy and prosperity.

Mayesha Alam is the associate director of the Georgetown Institute for Women, Peace and Security and the author of Women and Transitional Justice: Progress and Persistent Challenges.