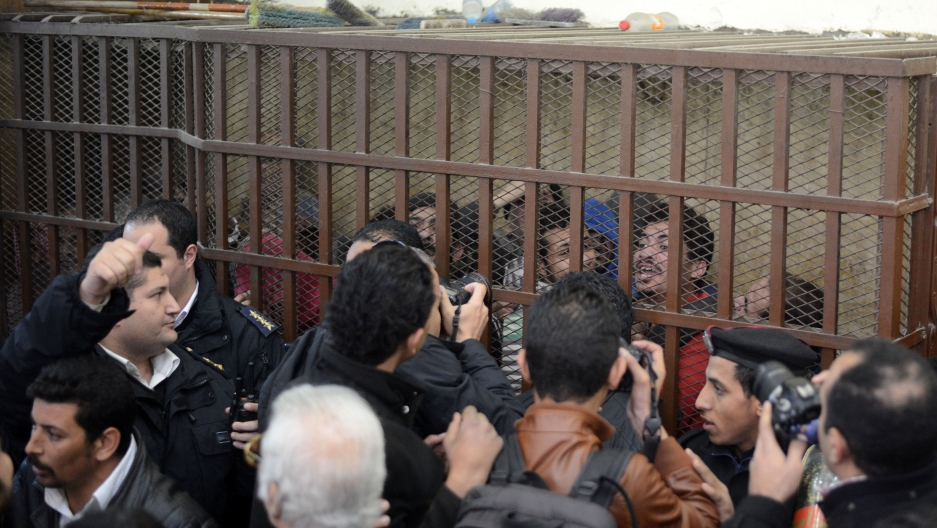 Defendants react behind the bars at a court in Cairo following the acquittal on January 12, 2015 of 26 male men accused of 'debauchery' after they were arrested in a night-time raid on a bathhouse in the Egyptian capital.
Credit: Mohamed el-Shahed
Share

It basically gave the government the right to ban “homosexual foreigners” from entering the country by upholding an earlier decision to ban a Libyan citizen from re-entering Egypt.The man had been arrested in October of 2008 on charges of engaging in “homosexual practices” and deported, according to el-Masri el-Youm newspaper.

While disturbing, the decision it not all that surprising. It comes amid the harshest crackdown on Egypt’s LGBT community in years. While homosexuality as such is not illegal under the law, since November 2013, about 150 people have been arrested on charges related to “debauchery” — a vague term that has been used to target men who have sex with men.

Similarly, “violating public morality” is another vague charge that can cover a wide range of "offenses" that are not specifically criminalized.

Lawyers who work on LGBT cases suggest the government is targeting the already vulnerable community to distract from the stagnating economy and unstable political situation.

“Will this be used for foreigners to punish them for their political inclination or activities?” Abdel Hameed asked after the ruling.

In Egypt there is precedent for targeting political activists by calling into question their sexual orientation.

The community faced persecution under the long-serving former President Hosni Mubarak. But now the sentences are longer and they are tending to stick, when once they were routinely overturned on appeal. In a recent case, a person found guilty was given 12 years in jail.

While it's unclear yet how this legal precedent will affect foreigners, the crackdown is already deeply affecting the lives of everyday Egyptians.

A man recently accused of “debauchery” tried to kill himself. Though he and other defendants were eventually acquitted, the social stigma remained. He tried to light himself on fire, giving himself third degree burns all over his body. He is not yet able to walk. And his family is struggling to pay for his costly medical bills.