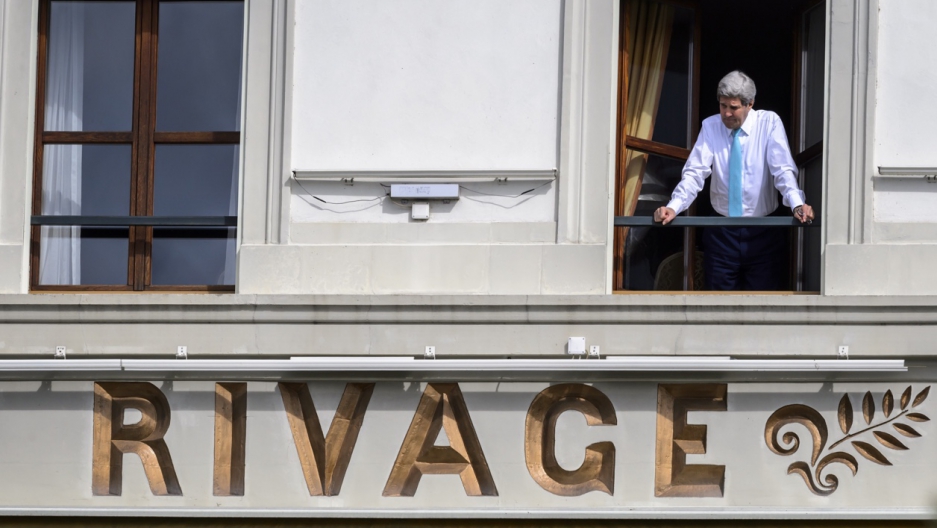 US Secretary of State John Kerry looks out of the window of his room at the Beau-Rivage Palace hotel during a break in Iran nuclear talks in Lausanne, Switzerland, on April 1, 2015.
Share

The United States and Iran have barely spoken in the last 35 years. But US Secretary of State John Kerry, in the last two years, has spent more time with his Iranian counterpart than any other country's foreign minister. And for awhile it looked like that time might pay off.

Kerry is so close yet so far from closing a deal with the Iranians, who in exchange for lifting economic sanctions would limit their capability to produce nuclear weapons. Beyond that, the deal would go a long way toward warming relations between the two powerful nations. A future where Iranian officials refrained from referring publicly to the United States as the “Great Satan” might be close. Or a future where Hollywood stops making films that feature Persians as terrifying enemies. A deal would have been monumental.

Yet the self-imposed midnight deadline on Tuesday passed without a handshake. There were no flashing cameras. Officials said maybe Wednesday instead. Maybe. After more than three decades, it seems Iran and the United States are still having a hard time understanding each other.

As The New York Times puts it, the United States is all about “numbers” and “limits,” while Iran is all about “respect” and “sovereignty.” A key sticking point is Iran's stockpile of nuclear fuel. For the Americans, sending it over to Russia for safekeeping (really?) seemed easy enough. Iran would still be its owner. For the Iranians, not so much.

In the end, as with so many things, it is all politics. While Kerry and his counterparts could probably make a deal today, they also have to contend with Iran's supreme leader and the US Congress, both of which are making all manner of demands that are holding things up.

The world's top five executioners are, in order: China, Iran, Saudi Arabia, Iraq and the United States. You'd think being among such company would be cause for concern for the US Congress. But the fact is that 6 in 10 Americans support capital punishment, according to a new report from Amnesty International. So the US government is actually just being kind of representative.

The scary thing is that the United States, and everyone else who executes people convicted of certain crimes, is essentially guilty of murder. All these countries have executed innocent people, Amnesty says. And despite the best efforts of groups like Amnesty International and The Innocence Project, these countries will likely continue to execute innocent people.

A Brazilian priest has been suspended because he sent a nude selfie to a woman who was apparently his mistress. The fact that he had a mistress seems like a suspendable offense in itself. The priest took the naked pictures in front of a mirror, which is technically a mirror selfie, and sent them using Whatsapp, a popular messaging app. It's not clear how the pictures got out, but the priest now faces excommunication from the Church.

But what makes this all the more sordid is that the priest was prominent for his conservative views on social issues. He has called kissing a “grave sin.” He authors a whole blog about it. Sexual liaisons, he says, are a “serious moral disorder as normally it leaves aside and abandons the procreative aspect.”