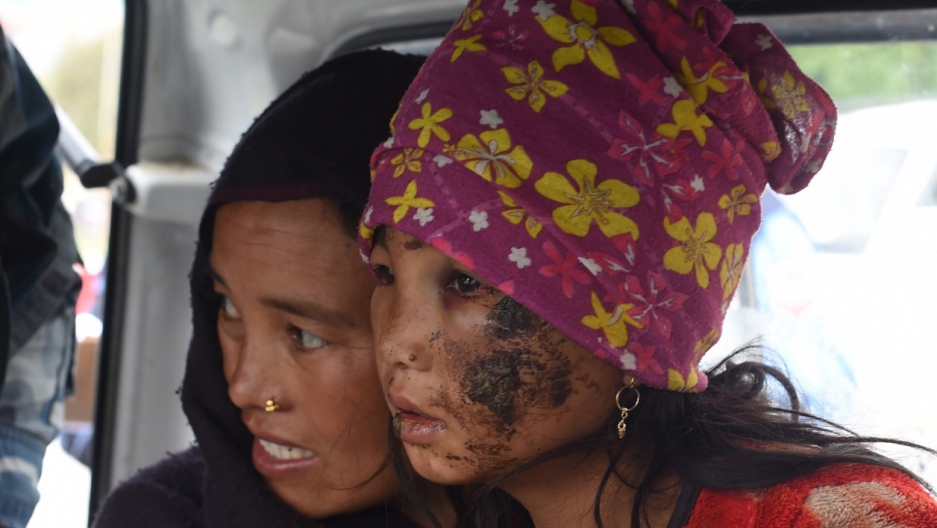 A Nepalese resident injured in an earthquake holds her daughter as they wait in an ambulance after being rescued on April 28, 2015.
Share

Millions in Nepal just spent a third sleepless night in the streets, plagued by fear of aftershocks. Officials say the death toll now exceeds 4,300 people. Prime Minister Sushil Koirala warned the toll could reach 10,000. He said the government is now on a “war footing.”

In the capital of Kathmandu it is chaos. Terrified Nepalese are fleeing the country by the thousands as foreign governments and aid agencies attempt to fly in rescue workers and supplies. The airport is nearly at a standstill. Four Indian air force aircraft had to return to Delhi because they weren't able to land. Meanwhile, in every empty space in Kathmandu, tent cities are springing up, populated by the thousands left homeless.

The United Nations says 8 million people across the country have been affected by Saturday's 7.8-magnitude earthquake. It added that about 1.4 million people are in need of food. The government has made a desperate plea as well for more tents and blankets, doctors and drivers. Clean water and electricity is hard to come by and concerns about outbreaks of disease are beginning to grow.

More than 50 hours after the quake, rescuers are still pulling bodies — and sometimes even survivors — out of the rubble in Kathmandu. But outside of the city, rescuers have still not reached some of the more remote rural areas closest to the epicenter of the earthquake. The roads are blocked by landslides and helicopters have been stalled by bad weather.

It's hard to say how quickly the death toll will rise once rescuers arrive in these areas. But some aid workers who have managed to reach them report that entire villages have been flattened. If you haven't already, here is how you can help. And remember, always send money, not stuff.

President Nursultan Nazarbayev of Kazakhstan killed it during his country's elections on Sunday. He won with 97.7 percent of the vote. And 95 percent of the country turned out to the polls. That's incredible.

A little too incredible. Nazarbayev has led the oil-rich Central Asian nation since 1989. And he seems to have mastered the whole "election" thing.

“I apologize that for super-democratic states such figures are unacceptable,” he told a post-election news conference on Monday. “But I could do nothing. If I had interfered, I would have looked undemocratic, right?”

No wonder he did so well — he has such a robust sense of humor. He was also helped along by his willingness to jail — or force into exile — any serious opposition. His only two opponents in the presidential race openly supported him.

Nazarbayev joins other really popular leaders like President Abdrabuh Mansur Hadi of Yemen, who won in 2012 with a whopping 99.8 percent of the vote. Hadi's win was probably aided by not having any opposition at all and having the very active support of both the United States and Saudi Arabia. Just a few years later and this is the state of affairs in Yemen.

There is also Egyptian President Abdel Fattah al-Sisi, who won with a somewhat suspicious 96.9 percent of the vote during elections held in June 2014. Sisi, a former general, overthrew Mohammed Morsi's government a year earlier. Morsi had won his election with a far less impressive (read: fair) 51.7 percent of the vote in 2012.

Speaking of elections, there is one coming up in Mexico. And it's getting heated. Unlike in Kazakhstan, there's actually some lively competition.

As the June vote gets closer, candidates are taking a page from their northern neighbor and going all negative. You have to check out these television commercials. In one, a man is asked what he thinks about the leader of the ruling Institutional Revolutionary Party (PRI) wearing a $140,000 watch. He replies, roughly: It’s “totally f---ed up."