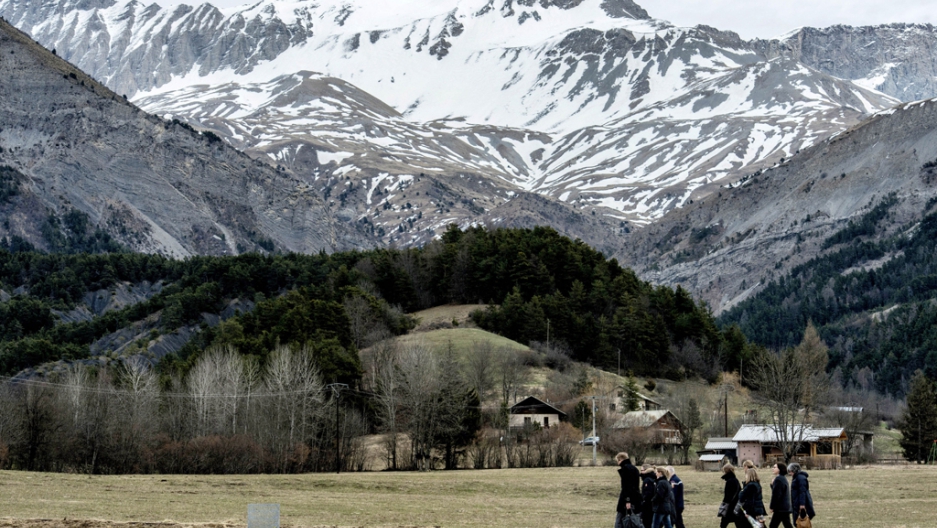 People arrive to pay tribute to the victims of a Germanwings flight that crashed in the French Alps, killing all 150 aboard, on March 28, 2015 at a memorial in le Vernet, south-eastern France, near the site of the crash.
Credit: JEFF PACHOUD
Share

BERLIN, Germany — The co-pilot suspected of deliberately crashing a passenger plane in the French Alps told his girlfriend he was in psychiatric treatment, and that he was planning a spectacular gesture that everyone would remember, the German daily Bild reported on Saturday.

The newspaper published an interview with a woman who said she had had a relationship in 2014 with Andreas Lubitz, the man French prosecutors believe locked himself alone into the cockpit of the Germanwings Airbus on Tuesday and steered it into a mountain, killing all 150 people on board.

"When I heard about the crash, I remembered a sentence, over and over again, that he said," the woman, a 26-year-old flight attendant the paper gave the fictional name of Maria W. to protect her identity, told Bild. "'One day I'll do something that will change the system, and then everyone will know my name and remember it'."

"I didn't know what he meant by that at the time, but now it's obvious," she said.

"He did it because he realized that, due to his health problems, his big dream of working at Lufthansa, of a having job as a pilot, and as a pilot on long-distance flights, was nearly impossible."

"He never talked much about his illness, only that he was in psychiatric treatment," she told the paper, adding they finally broke up because she was afraid of him.

"He would suddenly freak out in conversations and yell at me," she recalled. "At night he would wake up screaming 'we are crashing' because he had nightmares. He could be good at hiding what was really going on inside him."

German authorities said on Friday they had found torn-up sick notes showing that the co-pilot was suffering from an illness that should have grounded him on the day of the tragedy. Germanwings, the budget airline of the flag carrier Lufthansa, has said he had not submitted any sick note at the time.

The woman also told the paper: "We always talked a lot about work and then he became a different person. He became upset about the conditions we worked under: too little money, fear of losing the contract, too much pressure."

A Lufthansa spokesman declined to comment. However, the company and its lost-cost subsidiary Germanwings took out full-page advertisements in major German newspapers on Saturday, expressing its "deepest mourning".

Lufthansa and Germanwings offered condolences to the friends and families of the passengers and crew and thanked the thousands of people in France, Spain and Germany who have been of help since the crash.

German officials said there would be a ceremony on April 17 in Cologne Cathedral that would also be attended by German Chancellor Angela Merkel as well as senior government officials from other countries such as France and Spain.

A member of Lubitz's flying club in Montabaur, Dieter Wagner, told Reuters television the Germanwings co-pilot took part in one of the regular trips the club made to the Alps and that he apparently knew the region well.

However he added: "I don't think he picked the place out, I don't know. It would be too much of a coincidence..."