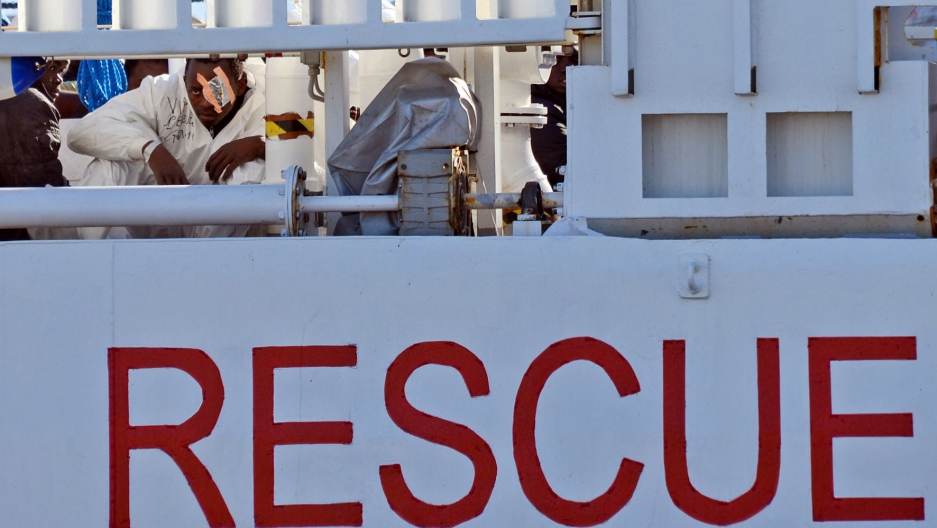 Shipwrecked migrants sit on the deck of a rescue vessel as they arrive in the Italian port of Augusta in Sicily on April 16, 2015.
Credit: Giovanni Isolino
Share

CAIRO, Egypt — With the arrival of warm weather and calmer seas, the annual human migration season has begun. Fleeing political instability and economic ruin, people from across the Middle East, North Africa and parts of Asia are making the perilous journey across the Mediterranean in search of better lives.

This year there has been a dramatic spike in the number of migrant deaths at sea. About 1,750 have died trying to reach Europe so far in 2015, according to the International Organization for Migration. That’s 30 times more than the 56 migrants who died during the same period last year.

In one of the worst migrant shipwrecks in memory, about 900 people are thought to have died when a boat carrying women and children capsized near Libyan waters.

The huge spike in deaths belies the fact that fewer migrants are actually attempting the crossing. Fifteen thousand have arrived on Italian shores since the beginning of 2015. But in 2014, 15,000 arrived in April alone.

So what is behind the 1,694 extra deaths so far this year?

One major factor is a change of policy by the Italian government to reduce the number of rescue boats patrolling international waters. In October the government halted the military's marine patrol program, citing the expense — 9 million euros a month — and domestic opposition.

The alternative to the Italian program, a joint EU venture, pales in comparison.

Italy's Mare Nostrum, which was essentially a humanitarian program, was replaced by an EU initiative called Operation Triton, implemented by Frontex, an group focused on border security. Triton was slated to cost just under 3 million euros per month. But it doesn't even have its own ships and surveillance equipment, instead relying on EU member states to provide them. And its mandate is focused more on securing the border than protecting the lives of migrants.

“I think it's clear that if you don't have a large force of some 32 ships and two submarines and a couple of helicopters in international waters you are going to have casualties, and clearly that's partly to blame,” said Leonard Doyle, spokesman for the International Organization for Migration.

The EU has since put out a 10-point plan to address the crisis. But like Triton, the plan is focused on security, with an emphasis on destroying smugglers’ boats and returning “irregular migrants.” Refugee advocates say there needs to be a more humanitarian mandate.

“Bottling people up in North Africa” is not the solution, Doyle said.

More than 170,000 migrants reached Italy last year, and 3,200 died trying. The International Organization for Migration is warning that by the end of the year, 10 times that number could perish at sea.