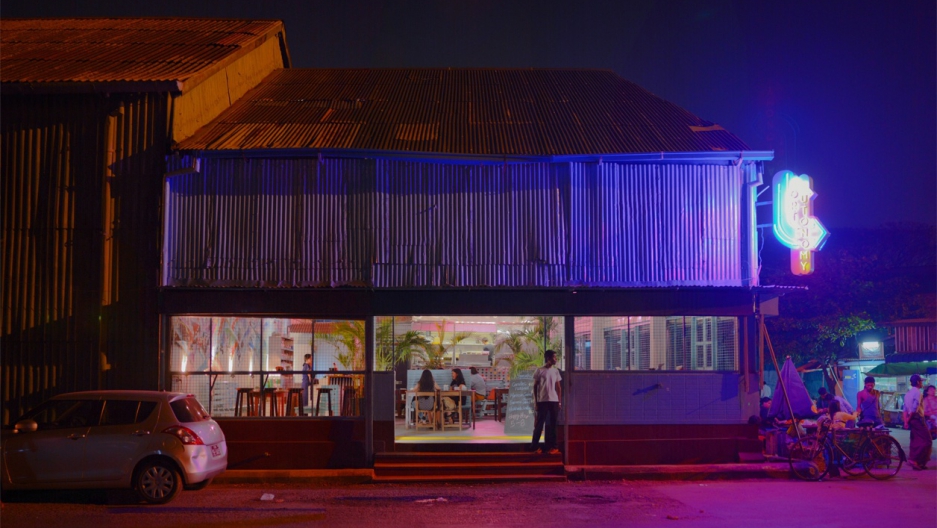 The exterior of Port Autonomy, a restaurant and bar in Yangon, Myanmar that is emblematic of the city's embrace of hipster culture.
Share

YANGON, Myanmar — There are many reasons why Myanmar is an unlikely haven for foodie hipsters.

Five years ago it was a police state. Its remote hilltops are ravaged by guerrilla warfare. The country’s national economy is smaller than the GDP of Jacksonville, Florida. The list goes on. And on.

And yet in Yangon, the nation’s largest city, you can now encounter mixologists. And food trucks. And pop-up bars. And premium organic fish broth. There are even parties where guys with elaborate mustaches get free sangria.

Yangon was until recently seen as a bleak no-go zone. But today, as the country shifts from decades of dictatorship, the early signs of a hipster revolution are emerging. This is Williamsburg, Brooklyn 20 years ago.

Is that a good thing?

Its debut late last year in Yangon — as a bar/eatery in a dilapidated wharf district — signaled the arrival of a new Brooklyn-infused foodie culture in Yangon.

Most who attract the “hipster” label shrink from the term. Ching leans in. “I realize ‘hipster’ became mad uncool many years ago,” he said. “But I think Yangon is truly kind of hipster. It’s touch and go. Nothing really works. Nothing’s perfect. We embrace that.”

Port Autonomy’s first incarnation was “cooler than Brooklyn” and “more hipster than hipster,” Ching said. He has a point. Just imagine a bar slinging cocktails in a rusty warehouse overlooking docks teeming with dockworkers and fishmongers.

A stoned graffiti artist decorated its walls. They salvaged its furniture from the docks. The view was a mesmerizing panorama of a soupy river plied by grunting steel ships. The menu? A mashup of Korean, Burmese and Mexican flavors — Ching’s self-proclaimed “dream hipster menu.”

It didn’t last. Local authorities were baffled to see Yangon’s well-to-do and miscellaneous foreigners partying to American rap while slamming tequila in one of the city’s poorer enclaves. “To accelerate our departure,” Ching said, “the government found reasons to cut our electricity off.”

So the eatery simply popped up elsewhere — on the grounds of a stately mansion across town where a goose named Gowanus pads about the lawn. The place stays packed.

“The difference is that other cities’ food scenes have grown up organically,” he said. “But here? It’s going to go from almost nothing to really exciting in just a few years.”

A scene at the Rangoon Tea House, a hip new restaurant in Yangon where an organic take on the classic Burmese dish Mohinga — a fish-and-noodle broth — sells for $5. At the more traditional street-side stalls, Mohinga sells for no more than 30 cents.

Port Autonomy is perhaps the brightest star in a constellation of upstart Yangon bars and restaurants that have given the city a place in the greater hipster galaxy.

There’s also Rangoon Tea House, a deluxe take on Myanmar’s greasy roadside tea and snack shops. There’s Blind Tiger, a speakeasy hidden inside an urban apartment block. In a nod to the prohibition era, patrons wait for a barman to eye them through a peephole in the door before gaining entry.

What these establishments and others have in common is an aesthetic — and attention to detail and quality — that would click in Portland or Berlin.

These operations are conceived largely by expats and “repats,” Burmese who’ve lived abroad and come back to the motherland. They’re a bit like the avant-garde who set up shop in Prague just after the fall of communism. This is a crowd that could move Yangon’s profile from “never heard of it” or “sounds scary” to “let’s go before it gets discovered.”

But as some Brooklyn natives know well, getting “discovered” can bring mixed results.

“The striking thing about walking into those places is, well, I never feel at home,” says Lamin Oo, a 29-year-old filmmaker with a Yangon-based documentary collective called Tagu Films.

Raised between Yangon and Myanmar’s dusty plains, Lamin Oo is also acquainted with American hipster culture. He lived in the United States for seven years and graduated from Pennsylvania's Gettysburg College. He was name-checked in a 2014 speech by US President Barack Obama, who cited Lamin Oo’s work “documenting the plight of Burmese farmers.”

“I can’t say these new places are wrong. But it feels not quite right when you walk out and see people sleeping in a stairway.” The experience, he says, can be “freaky and disorienting.”

Lamin Oo’s vertigo is easy to understand. Just five years ago, Myanmar was a totalitarian state. And that’s how it was for half a century. Like the rest of the country, Yangon was lorded over by generals who censored every song and imprisoned critics for decades. Western sanctions (led by the United States) left the nation isolated and seemingly stuck in time.

Only in 2011 did the nation begin its slow and messy ascent from dictatorship — a journey still marred by police brutality and ethnic persecution.

When Lamin Oo was younger, a fun night out involved sitting on plastic chairs and eating grilled pig tails. He and his friends would spend Fridays on Yangon’s 19th Street – a lovably grimy strip of beer and food stalls.

“We were trying to be cool kids,” he said. “That street was mostly older, drunk people. It was noisy. It was alive. But now the only time I go is with my white friends.”

These days, 19th Street is besieged with tourists who’ve read about the strip in guidebooks like Lonely Planet. Foreign faces, once rare in Myanmar, are now arriving in hordes. The nation is expected to bring in 4.5 million tourists this year — a nearly sixfold increase from five years ago.

“It’s suddenly cool to come to Burma,” Lamin Oo said. “And all those hip new bars are here to serve the demand for this new hipness.”

“A lot of people are coming here for the exotic factor,” he said, “and a part of me is fine with that. Culturally, we’re good hosts. You go to someone’s house and they’ll fan you. They’ll keep asking, ‘More food? You want more?’”

“But some people who come because we’re ‘exotic’ will end up falling in love and staying here.” This could be a good thing, he said. Myanmar has traditionally attracted some of the most curious and respectful travelers in Southeast Asia.

What Lamin Oo fears, however, is that foreigners will start to inhabit an opaque bubble, sipping mojitos in rarified air, quarantined from the daily drama of poverty and injustice playing out on the street below.

“If this new generation of foreigners goes to these places and thinks that’s Yangon, then that’s wrong,” he said. “That shouldn’t be the only experience they have: ‘Hey, I went to Burma and partied at a bar in a colonial building and it was awesome!’ No, I don’t think that’s fair.”

A mix of locals and foreigners party at Port Autonomy in Yangon, Myanmar.

To many foreigners, Yangon’s most striking quality is its glaring lack of corporate franchising.

US sanctions created a shell around Myanmar that has held many foreign conglomerates at bay. Those who lament America’s crushing sameness — the landscape stuck on a loop of Starbucks, KFC and The Gap — are often exhilarated to see a city largely untouched by the long tentacles of globalization. Even if the sewer system hasn’t been overhauled since the 19th century.

But to locals like Ye Myat Min, a 24-year-old tech entrepreneur, this isolation is exhausting. “Actually, I miss Starbucks,” he said. “That’s the first thing I buy when I get to Bangkok or Singapore. Followed by McDonald’s.”

The past few years have been thrilling for Ye Myat Min. As a computer geek growing up in a tech wasteland, he always assumed he’d have to go abroad to succeed.

Now he’s running his own startup, Nex, which designs apps for Myanmar’s booming smartphone market. Mobile phone SIM cards — once priced artificially high at $2,000 to keep them in elite, government-linked circles — now sell for $1.50. Even Obama, on his most recent visit, marveled at dudes who “didn’t have any shirts but they had a smartphone.”

For Ye Myat Min, the future can’t come fast enough. And if de-isolation brings in hipster foodie bars, that’s just fine with him.

“Yes, these places are very expensive for the average worker. But it’s not like there aren’t plenty of cheap, non-hip options,” he said. “The whole idea of hip is exclusivity. If it’s not exclusive, it’s not hip anymore, right?”

“It’s ridiculous but at least they’re doing something creative with local food. It’s not the ‘authentic’ mohinga on the streets that sells for (30 cents) and” — he adds with a touch of sarcasm — “will probably give you diarrhea.”

Myanmar’s poverty runs so deep that many would have to work one full week to afford a $12 meal. That doesn’t mean the well-to-do foreigners should try to live like peasants, says Aung Aung, a taxi driver in his early 40s who endured more than 15 years in prison for protesting against the government.

His nickname is Shell, a nod to his false teeth, installed after neglect and police beatings destroyed the originals. His message to incoming foreigners: temper your carousing with a little charity and you’ll be fine.

“It’s not my place to tell people where to eat. It’s fine to have high-class people who can afford nice food in Yangon,” he said. “But if you can afford 10 expensive meals, consider having nine and saving the extra cash for a family that’s desperate.”

Myanmar’s indigenous dishes can be spectacular. The local cuisine is scandalously overlooked by the outside world. But when it comes to a new-wave urban foodie scene — found in capitals from Bangkok to Berlin — there has long been a void.

Port Autonomy and establishments like it “aren’t here to mend Burma’s disparities,” Ching said, but they do want to fill that void. “We’re not too cool for school,” he said. “We just want to introduce world-class standards of food and art. We want to show Burma what’s possible here.” That, he says, can have “real positives for the economy.”

The thrill of watching a society go from zero to sixty is part of what lures more outsiders to Yangon each day. “A lot of people are coming here for the cool, exotic factor,” Lamin Oo says. “But there will come a time when, like anything in pop culture, the trend passes.”

Yangon cool may expire sooner than expected. The latest “food truck” coming to the city? It’s run by KFC and so anticipated that it’s taking reservations.