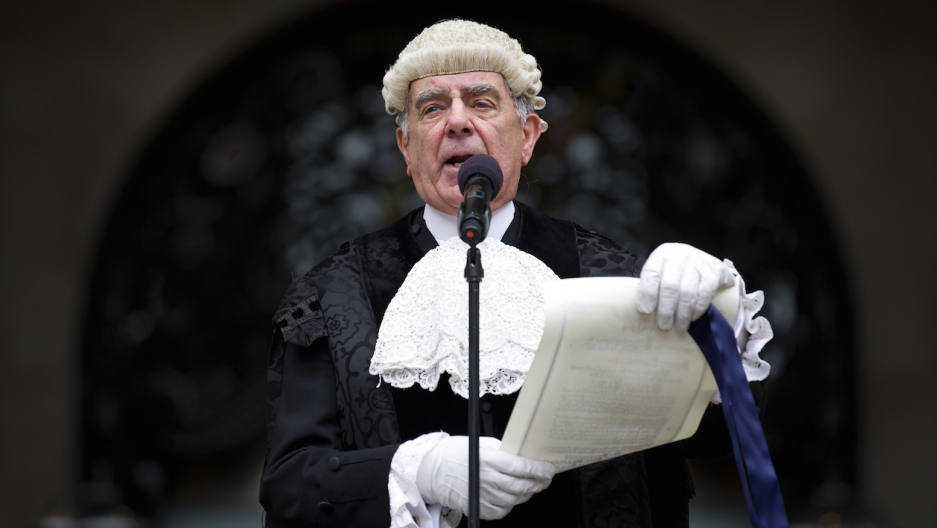 London Common Crier Col. Geoffrey Godbold reads out the proclamation for the dissolution of Parliament on the steps of the Royal Exchange in Bank, central London, on March 30.
Credit: Justin Tallis
Share

LONDON — There’s just over a month to go before British voters head to the polls to re-elect their members of Parliament. The election will result in a new government — and possibly a replacement for Prime Minister David Cameron.

That may seem straight-forward enough. But there's a lot about the British electoral process that would baffle the uninitiated.

Unlike the United States, where breathless speculation about an election more than 18 months away is considered totally reasonable, the United Kingdom keeps its campaign season short and to the point. The campaign officially began Monday and ends with the general election on May 7.

Here’s a simple primer on the quirks of about the country you thought you knew.

There are no lawmakers in Britain anymore.

On Monday, Cameron visited Buckingham Palace to ask Queen Elizabeth II for permission to dissolve Parliament. Dissolution brings the legislature’s term to an end — in this case, the five years since the last government. School’s out for Parliament, basically.

Even their Twitter accounts have to be updated with a clear disclaimer. The one above belongs to Foreign Secretary Philip Hammond.

But there is still a government.

Cameron is still prime minister. Ministers keep their jobs. Ninety percent of civil servants will continue to do their jobs as usual. It doesn’t suddenly become a lawless, ungoverned island. This isn’t Lord of the Flies.

Compared to the US, campaigns here are low-key. And cheap.

The amount of money Brits spend on their elections would make a US campaign consultant snort Moët & Chandon out his nose.

UK political parties, candidates and interest groups spent a combined total of $88 million in the last general election in 2010.

The US presidential and congressional races in 2012 cost $6.2 billion. Billion, with a B.

A budget that’s 1/70 that of a US campaign cycle means fewer advertising materials, lower-key campaign stops and a mere fraction of the balloons US voters have come to expect.

UK law forbids political TV ads, so voters are spared those, too.

Every seat is up for grabs.

Every one of the 650 seats in the House of Commons is up for grabs. Like the US, the UK uses a simple plurality voting system. Whoever gets the most votes in a given contest wins. But the Brits call it “first past the post,” which amusingly evokes the image of suited middle-aged men and women sweatily huffing across a finish line.

Candidates don’t even have to pretend to be locals.

This lets candidates stop pretending that they care deeply about the issues of West Bumfordshire* and admit that they just want to be in the Parliament Choir.

*Not a real place.

We’ll say it again: Britain does not vote for prime minister.

The only people who will cast a vote for either the Conservative Party’s David Cameron or Labour Party leader Ed Miliband are residents of their home constituencies who vote for them as MP. For Cameron, that’s a Tory stronghold in Oxfordshire called Witney. Miliband is running to keep his seat in Doncaster North, in Labour’s traditional northern heartland.

British voters cast one vote at the national level in a general election: their local member of parliament. The party that wins a plurality of seats will form a government, and its leader will likely be prime minister.

Nobody knows who is going to win.

This is one of the toughest elections to call in UK history. At the moment, neither major party — Labour or Conservative — looks likely to get enough seats to form a government outright. That’s called a hung Parliament.

The party with the most votes will probably have to form a coalition with a smaller party to get the majority needed to form a government. That’s what happened after the last election in 2010, when the Conservatives paired up with the Liberal-Democrats to form the coalition government that’s ruled for the last five years.

Liberal Democrats here, known as Lib-Dems, are a little different from American Democrats: the British ones actually lean free-market libertarian.

If it happens again, a strange dance of math and political maneuvering begins. The Lib-Dems have collapsed since the last election and may not have enough seats to be a player.

The Scottish National Party has exploded in popularity since the independence referendum in September at the expense of the Labour party, but both parties have balked at the idea of governing together.

The ascendant UK Independence Party (UKIP) has peeled away working-class voters from both Labour and the Conservatives, but neither party seems particularly eager to join forces with anti-immigrant, anti-EU, gaffe-prone party.

The smaller parties are likely to play a bigger role in this general election than in any before. Tiny as the left-wing Green Party is, it could pull enough votes from Labour to make a difference. So could the nationalist parties in Scotland and Wales. UKIP took 3.1 percent of the vote in 2010, but is polling as high as 15 percent in some surveys now.

The only certain thing is that it’s anybody’s game.