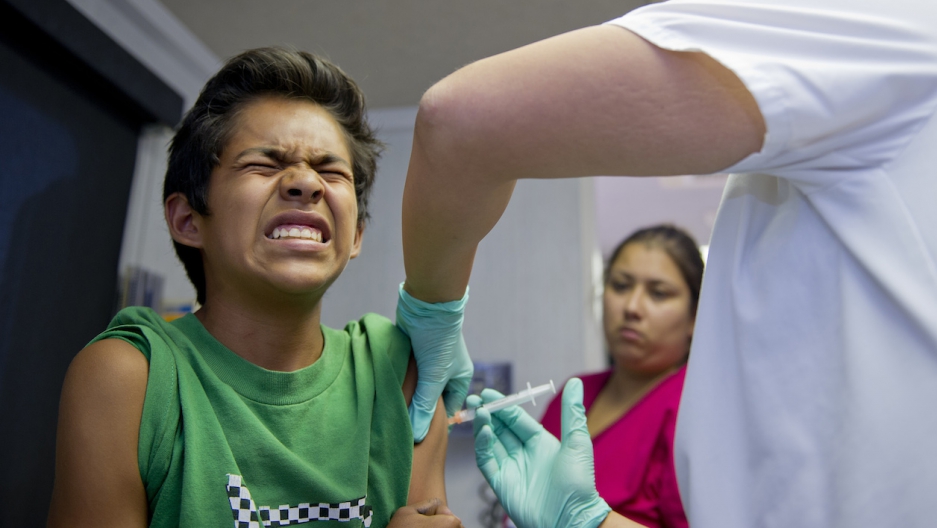 For those of us who live in the sanitized safety of our shiny, seemingly germ-free world of hand sanitizers, wet wipes and anti-bacterial everything, it's sometimes hard to imagine diseases that have been all but eradicated in the last few decades ever making a comeback.

At the beginning of the 20th century, life expectancy in the United States was 47 years, and today's newborns are expected to live 79 years.

More from GlobalPost: This map shows which is the deadliest infectious disease where you live

However, in recent years, some of the deadly diseases that we thought were the stuff of history books are back with a vengeance in many parts of the world — and not just in developing countries.

Why are preventable diseases making a comeback?

In the US, a recent outbreak of measles has been linked to a rise in unvaccinated children. Up to 40 percent of American parents are either delaying or skipping vaccinations, according to a study published by the medical journal Pediatrics in May last year. Parents subscribing to the anti-vaccination movement ignore the Center for Disease Control (CDC)'s calls for vaccination, thanks in part to a now-debunked study linking vaccines to autism.

Elsewhere, the resurgence of certain diseases isn't just about the choices of parents — in some cases, outbreaks are yet another deadly cost of war.

War-ravaged Syria saw its first case of polio in 14 years in October 2013 as vaccination rates in the country sank to 52 percent. Aid agencies came together to fight the outbreak, vaccinating 1 million children, but approximately 80,000 Syrian children still haven't been vaccinated for polio, according to UNICEF.

More from GlobalPost: In the midst of conflict, Ukraine’s children are vulnerable to polio outbreak

So far, only one human disease has been completely eradicated: small pox. Now, we find ourselves battling outbreaks of diseases we thought we had defeated years ago. Here are some of them:

Around the world, this contagious and deadly disease is the leading cause of death among young people, according to the World Health Organization (WHO). The group reported 145,700 deaths in 2013 — which comes to 400 deaths every day or 16 deaths every hour.

A vaccine against the disease was introduced in 1963, slashing measles cases by 99 percent. Now, in 17 US states, vaccination rates for preschoolers sit below 90 percent, and 91 percent nationally. That has meant the disease's reemergence, despite easy access to the vaccine. The US saw an average in 63 measles cases per year between 2000 and 2007. By 2013, the incidence of measles tripled.

The most recent measles outbreak — which all began with seven people who contracted the disease during a visit to Disneyland in December — has now led to almost 200 measles cases in the US and more than 100 in Canada.

According to health officials, the disease spread after an unvaccinated California woman contracted the disease while visiting the theme park, and eventually made her way to the airport. The disease, which lives on surfaces for up to two hours and is spread through sneezes and coughs, will infect 90 percent of non-immune people exposed to it, according to the CDC.

Whooping cough, or pertussis, is yet another disease that's made a comeback in recent years, and the anti-vaccination movement isn't the only reason why.

The highly infectious disease, which causes violent fits of coughing that result in passing out, vomiting, and even broken ribs, was eradicated almost entirely in 1976. There were only 1,010 cases of the disease back then. Around 28,660 cases of whooping cough were reported to CDC in 2014 — an 18 percent increase from 2013. It's just as contagious as measles, and way more contagious than Ebola. California last year faced its worst outbreak of the disease in 70 years.

When it comes to the resurgence of pertussis, the culprit, you could argue, is the vaccine itself. In the 1980s, concern about the vaccine's side effects led to the development of a new version, which became available in 1992. The new vaccine was safer, but only conferred temporary immunity, so in 2005 doctors started recommending a booster shot for children 11 or 12 and older.

You can probably guess what happened next. For some children, the vaccine wore off before they got their booster. Other children never got the booster. And a few children got the booster but became sick anyway.

“The big answer is that we need a better vaccine,”  Mark Sawyer, a professor of clinical pediatrics at the University of California, San Diego and an adviser on federal vaccine policy, told Scientific American in 2013. “That is up to the scientists who would do a study of what would make a better vaccine, and it is up to the pharmaceutical companies.”

If you've read Little Women, or you've at least watched the episode of Friends when Joey attempts to read it, you know that the novel's saddest moment is probably the death of kind and sweet Beth, the youngest of the March sisters. Beth contracts scarlet fever, and even though she survives at first, the disease leaves her weak and she eventually dies.

It's a disease that starts out much like strep throat, but eventually develops into a fever, a large red rash on the body, and a tongue the shade of strawberries. It's easily treated with antibiotics. If it's left untreated, it can cause some serious health issues.

The UK is currently seeing its worst outbreak of the disease in half a century, with 1,265 cases registered since the start of 2015.

While it won't mean the death of any modern fictional characters, it's still highly contagious. There were 14,000 cases of scarlet fever reported in Britain last year.

It was once one of the most feared diseases in the US, killing an average of more than 35,000 people each year between the late 1940s and early 1950s, according to the CDC. Even President Franklin D Roosevelt bore the scars of this crippling disease, which paralyzed him in the early 1920s and nearly cost him his political career.

Its characteristic symptoms — stunted legs and paralysis — were first recorded in an ancient Egyptian illustration of a victim. It's a disease that humans have been dealing with for a pretty long time.

Since 1988, polio cases have decreased by over 99 percent. However, Afghanistan, Pakistan and Nigeria still struggle to control the spread of the deadly disease both domestically and internationally. In 2013, WHO declared the dangerously rampant spread of polio an international public health emergency after nearly 60 percent of polio infections during 2013 were spread through adult travelers.

It can only be prevented through vaccination, and so far, there's no cure.

It was known as the "Black Death" during the 14th century, and back then the devastating pandemic wiped out a third of Europe's population.

It's a bacterial disease that reaches humans via the bites of infected rodents or fleas. People infected develop swolen lymph nodes and eventually pneumonia, which means that it can be passed along by coughing or sneezing.

It's been virtually eradicated in the developed world, but according to the WHO, there were 783 reported cases and 126 deaths caused by the plague worldwide in 2013.

In Madagascar, the bubonic plague has killed 71 people and infected 263 since September. Last summer, parts of Yumen, a city in northwestern China, were sealed off and 30,000 confined to their neighborhoods after the disease killed a local man.

Clarification: An earlier version of this article did not include information about problems with the current pertussis vaccine. The article has been updated.