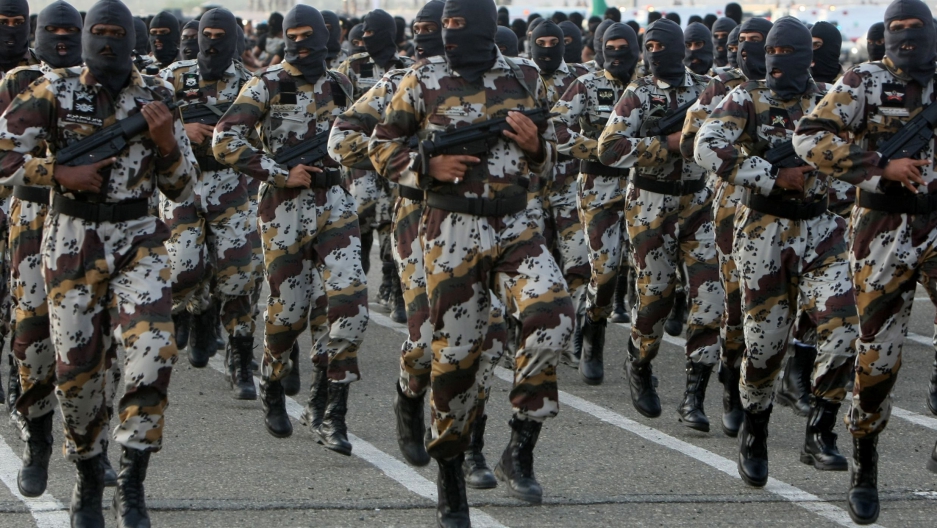 Saudi security forces march during a military parade at a base near Mount Arafat, southeast of the holy city of Mecca.
Credit: MAHMUD HAMS
Share

CAIRO, Egypt — It was against a backdrop of chaos and violence not seen for decades that Arab leaders decided to announce the creation of an army that would combine their military forces. You might call it the Arab world's answer to NATO.

As they met in Sharm el-Sheikh, Egypt, on Sunday, many of the participant countries were taking part in Saudi-led airstrikes against Houthi forces in Yemen. Fighting is ongoing in Libya, Syria and Iraq, while the US and Iran appear closer than ever to an agreement over the latter’s nuclear program.

In a time of great upheaval, Arab leaders appear to have found the will to tackle what their predecessors have tried and failed to do in the past. But what will this army look like? And will it work?

Egypt in the driver’s seat

The resolution agreed to at the Arab League summit stated that such a force could be deployed to assist any Arab nation that faced security threats, as well as to combat terrorism. But the details remain vague.

Only Egyptian officials have come forward to share a few hints of what such a force might look like — 40,000 troops headquartered in Cairo or Riyadh as well as jet fighters, warships and light armor, as Egyptian military and security officials told the Associated Press.

It seems likely that Egypt will take the lead, at least on the ground. With its armed forces numbering nearly 500,000, Egypt would probably contribute the largest number of troops to any ground force.

Egyptian president Abdel-Fattah el Sisi is a former general, an army man by training and not one to shy away from military force. In addition to the campaign in Yemen, Egyptian planes recently carried out airstrikes in Libya, allegedly in retaliation for the killing of 21 Egyptian migrant workers by the Libyan branch of the Islamic State.

“There is a desire to project Egyptian power into the region and most importantly to be seen doing so. The longstanding critique of the Mubarak era of a passive, domesticated Egypt — domesticated by the United States — is finally seen to be brought to an end,” explains Robert Springborg, professor of national security affairs at the Naval Postgraduate School in Monterey, California.

There is also a financial incentive for Egypt, a country that is suffering economically but maintains the largest standing Arab army. Springborg suggests Egypt may receive a hefty stipend for providing the bulk of the troops.

Saudi Arabia and the United Arab Emirates have particularly developed air capabilities — analysts suggest that Saudi's could soon rival Israel's. The UAE has some of the most advanced jets in the world.

They’ve been here before

Although Arab states may have the capability to create a formidable joint force, history tells us that actually doing it is much harder.

There have been several efforts at military integration, all of which have failed, some of them catastrophically.

“The Joint Defense Council itself was created in 1950 after the disastrous experience of the 1948 war with Israel when five Arab states completely failed to act jointly and were each defeated separately by Israel,” explains Bruce Riedel, senior fellow at the Brookings Institution in Washington, DC.

But this is also not the first time an Egyptian military force has set foot on the Arabian peninsula. In the last 200 years, Egypt has intervened in the Gulf only to oppose the Saudis — in the 1820s to defeat the Wahabis, in 1955 when Egypt-trained army officers attempted to overthrow the Saudi monarchy, and in 1967, backing the republican government in Yemen while the Saudis backed the royalists.

It is not surprising, then, that some experts suggest an Egyptian military force moving around the region might make some Gulf states uneasy.

Another obstacle is present-day intra-Gulf tensions. Following the overthrow of Muslim Brotherhood President Mohamed Morsi in Egypt in 2013, the UAE and Saudi sided with the new military government while Qatar stood with the Brotherhood, which Cairo subsequently declared a terrorist organization. The diplomatic rift between these factions has yet to fully heal.

A message to the Americans

These obstacles aside, there are a good number of reasons for Arab nations to unite at this point in time.

The announcement serves as a signal to the United States of the Arab countries’ dissatisfaction, particularly as Washington inches toward a nuclear deal with Tehran. Many Arab governments feel that the US is acquiescing in the face of an expanding Iran, Saudi's regional foe, and giving the concerns of Arab states short shrift.

While Washington has expressed cautious support for the joint force, there remains concern in many quarters about what its creation would mean for operations in the region.

“On the one hand you can say at last they’re taking responsibility for their self-defense, but on the other hand because this is a region with so many conflicts and problems and difficulties because this is a new thing in which the parameters are not established. There’s always a danger that they’re going to flex their muscles and create reactions against them such as by Iran,” says Springborg.

“There’s a fear of a sort of Rambo mentality in the Arab world such as manifested in the strikes in Libya.”

In recent years there has been unprecedented militarization in the Gulf states, with the UAE, Saudi and Oman emerging as some of the most influential and fastest-growing defense markets in the world.

With all this in mind, it is likely any force would be much smaller than anticipated.

“It is more likely that military cooperation will be more bilateral and episodic than the ambitious plans laid out in the Arab summit. Ad hoc arrangements blessed by Arab summits seem more likely than a NATO-like joint force and integrated command structure,” says Riedel,

Indeed, it may never come into being at all.