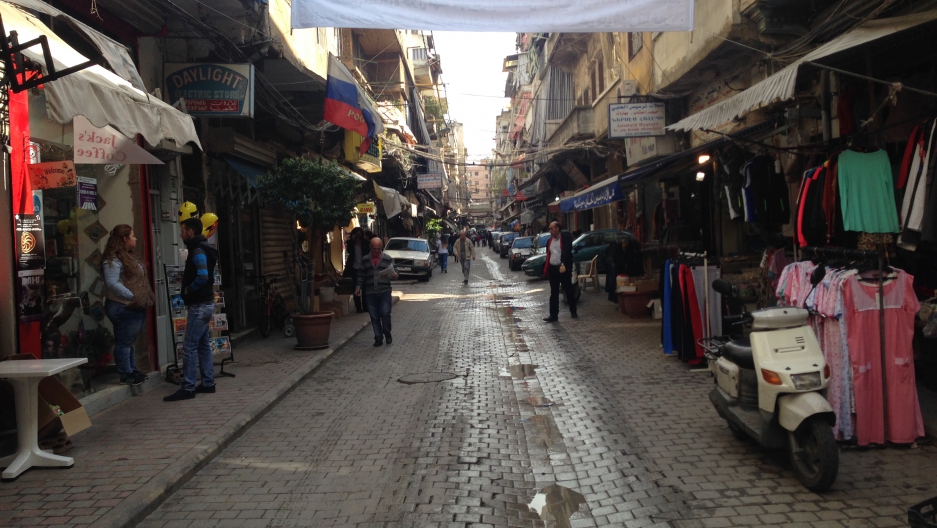 A street in Bourj Hammoud, a neighborhood in east Beirut that is home to a large Armenian community.
Credit: Richard Hall
Share

BEIRUT, Lebanon — You have to look pretty hard to find a patch of blank wall in Bourj Hammoud.

The narrow streets of the Armenian neighborhood in east Beirut are a clutter of shop signs and wares spilling out on to the sidewalk. Then on those quieter roads and alleyways, any sizeable piece of bare concrete is usually marked with graffiti, all with a familiar message.

There’s a lot of anger against Turkey here, and not without cause. A large number of the people living in the neighborhood are descendants of those who survived the Armenian genocide.

As many as 1.5 million Armenians were killed when the rulers of the declining Ottoman Empire forcibly deported men, women and children during the World War I. Many were killed in mass executions, others died in the “death marches” to concentration camps in the Syrian desert.

Some managed to escape to Beirut. When they arrived, the authorities allowed them to set up camps on the east bank of the Beirut river, where the bustling suburb of Bourj Hammoud stands today.

On Friday, Armenians here and around the world will commemorate the 100th anniversary of the genocide. The act of remembering is painful enough, but that pain is made worse by Turkey’s refusal to acknowledge the events of 1915 as a genocide.

“Denial is the last stage of genocide,” says Vahram Emiyan, an Armenian journalist, sitting in the office of the newspaper where he works off the main street of the neighborhood.  “If they continue to deny it, then the genocide continues for many of us.”

Emiyan’s grandfather was a survivor of the genocide. He was a young boy when he and his parents were forced from their home in the town of Gaziantep, in southeastern Turkey. Both his mother and father — Emiyan’s great grandparents — died along the way, and he arrived in Beirut an orphan.

Today, signs advertising memorial events are posted all around the neighborhood. Most shops display a notice saying they will be closed on April 24 in memory of those who died.

In a small clothes shop at the end of a busy shopping street, a display window is full of t-shirts with the words “100 Years” emblazoned on the front. The zeroes have been replaced with pictures of flowers — forget-me-nots.

“We weren’t there, but we can understand the pain of our grandparents and parents,” says Maral, the shop’s owner.

“I don’t hate them,” she says of those in Turkey who refuse to call the killings genocide. “I just want them to recognize their actions for what they were.”