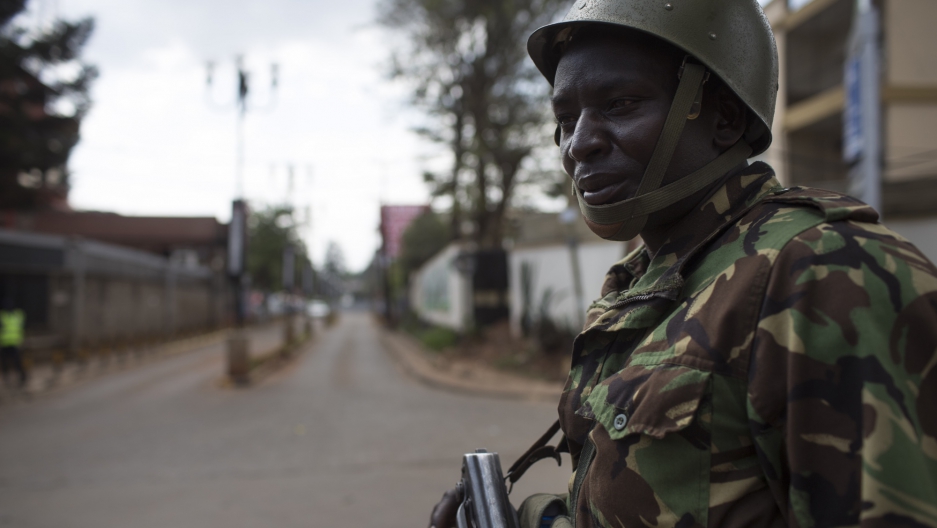 A Kenyan police officer keeps watch near the Westgate mall in Nairobi on Sept. 28, 2013, after Al Shabaab launched a four-day siege that killed at least 67 civilians and police.
Share

Six months ago, an American airstrike in southern Somalia killed Ahmed Godane, a man who had a $57 million bounty on his head. He was the leader of Al Shabaab, the Somali terror group.

A year earlier, he had organized and ordered an attack on the Westgate Mall in Nairobi, Kenya, which killed 67 people. Nairobi is a popular base for Western journalists, and several of them witnessed the attack. The news went global in a way that conflict in Africa rarely does. So when the Pentagon confirmed Godane had been killed, American and Kenyan authorities probably breathed a sigh of relief.

But as history has repeatedly taught, killing the leaders of terrorist organizations can have little impact on the survival of the groups themselves, which often endure not with the help of great leaders, but with an ideology that preys on the poor and oppressed. Al Qaeda has hardly gone away with the death of Osama bin Laden.

“In 2008, a US missile strike killed Godane’s predecessor, Aden Hashi Ayro. Far from destroying Al Shabaab, his death allowed its takeover by Godane, who transformed it from a nationalist Islamic insurgency into a transnational Al Qaeda affiliate capable of administering large parts of southern Somalia,” GlobalPost reported at the time of Godane's death.

After the United States killed Godane last year, Al Shabaab quickly appointed yet another new leader. And early this morning, as most of the students at Kenya's Garissa University College still slept, Al Shabaab demonstrated its resilience. Gunmen stormed the campus, fighting past security and into the dorms. At least 14 people have so far been killed, scores more injured. Garissa University is 90 miles from the border with Somalia, where Al Shabaab is based.

Earlier this week, this photo went viral. It's said to be a picture of a young Vietnamese girl. She is sobbing after finding what she thinks is her pet dog killed and displayed at a local meat market. The dog's name was "Flower."

Dog meat has long been a delicacy in Vietnam, especially among older generations who see dogs not as friends, but as food. It's still popular enough that the black market dog trade can bring in profits that rival drug dealing. Dog thieves now haunt the streets of cities, brutally snatching up pets to sell. They also stalk rural villages, where family dogs run free.

Now dog lovers are fighting back, sometimes in shockingly violent ways. Some Vietnamese have formed vigilante groups that beat captured thieves mercilessly, filming it as a warning to others. Since 2012, at least 20 would-be thieves in Vietnam have been killed by angry mobs.

Josef Stalin is a name most of the world associates with repression, terror, mass killings, imprisonment. The Gulag, anyone? During the Great Terror of 1937, Stalin oversaw the execution or jailing of more than 1 million people.

While Stalin has been dead for 60 years, his spirit is alive and well in Russia, where — impossibly — 45 percent of the population now thinks that all of the hell brought forth by Stalin was justified. He won World War II, after all. And restored the Soviet Union's economic might.

In 2012 only 25 percent held this view, and it was limited mostly to very conservative circles. So what has happened in the last few years? Vladimir Putin, for one. Putin's showdown with the West over Ukraine is stoking some rose-colored patriotism. But there also seems to be an active government effort to rehabilitate Stalin's image at home. For human rights activists, that's a pretty scary development.