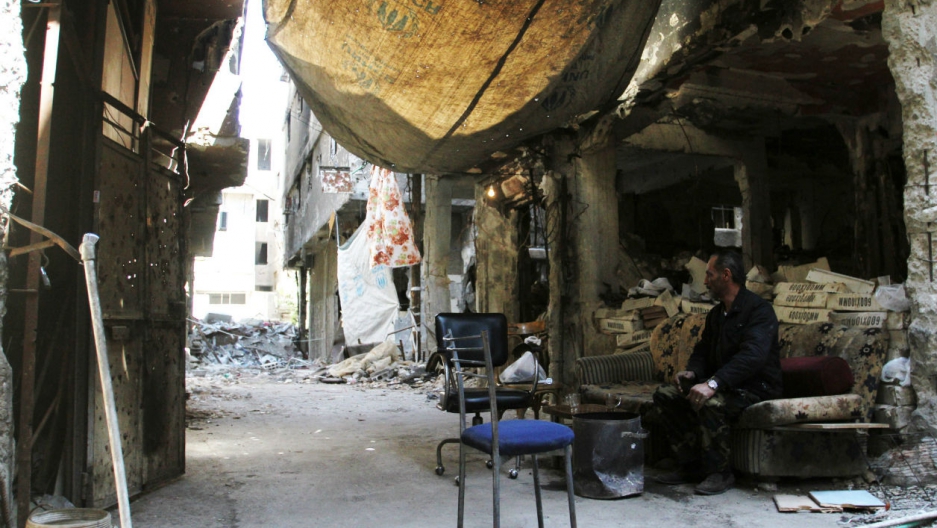 A man sits inside a demolished building in the Yarmouk Palestinian refugee camp in the Syrian capital Damascus on April 6, 2015.
Credit: Youseff Karwashan
Share

Editor's note: All names in this story, apart from the representative from the Palestinian Network of Civil Society, have been changed in order to protect identities.

BEIRUT —  “What do you think of my room?” Firas asks me in his apartment in Shatila refugee camp, one of the Palestinian refugee camps of Beirut. “The walls are so blank — at home, in Yarmouk I had so many pictures and posters.”

When Firas talks about his former home in Yarmouk, once the largest Palestinian refugee camp in Syria, his emotions vary from minute to minute. One moment he's laughing uproariously, recalling a fond memory or a funny story. The next he's somber, overcome with a palpable sadness.

“So many emotions, it makes me so sad to think about this,” he says. “At the same time, it's all I think about.”

One week ago, Islamic State (IS) militants stormed Yarmouk. All this week, Firas and his roommates — also Palestinian refugees from Syria— are preparing a series of events to draw attention to the plight of Yarmouk. Though pushed to action by IS's invasion, their goal is to show that the humanitarian catastrophe in Yarmouk is nothing new  — the world just hasn't paid attention until now.

Once upon a time, Yarmouk was a thriving neighborhood in the southern suburbs of Damascus. Established in 1957, it was meant to be a refugee camp for Palestinians fleeing after the creation of Israel, known in Arabic as the Nakba (catastrophe), and later the 1967 war. Though it had all of the markings of a refugee camp — including less than one square mile of space with 13 times the population density of Manhattan — it was equally regarded as an artistic and cultural center. Nicknamed the “Capital of the Palestinian Diaspora,” Yarmouk was known for its vibrant community of artists, late nights of drinking, smoking and socializing and rich culinary tradition.

“There was so much life in the streets,” Firas tells me. “Anything you could possibly want you could find in Yarmouk.”

As the Syrian uprising against the Assad regime became an armed resistance — and then a full-scale civil war — Yarmouk became increasingly politicized.

Located in the southern suburbs of Damascus — in clear sight of the Presidential Palace—it was strategically advantageous to the rebels. However, Hafez al-Assad, Bashar al-Assad’s father and predecessor, had made protection of Palestinians a political priority. At first it was unclear where Yarmouk’s loyalties would lie.

On December 16, 2012 the first bombs fell on Yarmouk. A Syrian regime MiG jet targeted several sites within the camp. First a mosque. Then a hospital. Then a school. Refugees poured out of the checkpoints, some going to camps  for internally displaced persons (IDP) elsewhere in Syria, others crossing the border into Lebanon.

Many had once imagined that leaving Yarmouk would mean returning to Palestine. Most of them, like Firas, instead found themselves in camps like Shatila — abysmally overcrowded, and now, even farther from home.

“I remember seeing flesh in the streets, rivers of blood,” Firas, who left Yarmouk immediately following the attack, recalls. “I cannot erase these memories from my mind.”

For those who remained, the humanitarian situation deteriorated rapidly. Civilian casualties mounted as mortar attacks from the regime and street clashes continued. The regime imposed a partial siege, closing several checkpoints and placing restrictions on what citizens could bring into the camp. More and more people left. What was once a population of more than half a million had dwindled to only 18,000.

A man walks in a street inside the Yarmouk Palestinian refugee camp in the Syrian capital Damascus on April 6, 2015.

In July, the partial siege became total. For the next five months, almost nothing got in and no one came out. Agencies, such as United Nations Relief Works Agency (UNWRA), who are responsible for humanitarian relief in Palestinian refugee communities, were unable to access the camp. The food that did arrive was smuggled in through checkpoints and delivered in small boxes.

The price of basic necessities skyrocketed. A kilo of rice cost 70 dollars. Yarmouk, where the smell of fresh food once wafted from every street corner, was now synonymous with hunger. An imam even issued a fatwa allowing dogs and cats to be killed and cooked as meat. People ate grass and weeds to survive. Malnutrition became rampant as the average caloric intake dropped to 400 calories per day. With hospitals operating at only 10 percent capacity, and a lack of medical supplies due to the siege, 176 people died of hunger.

In this handout provided by the United Nation Relief and Works Agency (UNRWA), Yarmouk residents wait in line to receive food aid distributed in the Yarmouk refugee camp on Jan. 31, 2014.

In spite of the siege, local organizations continued to coordinate and deliver what aid they could, often thinking creatively. NGOs delivered water in trucks. Food sovereignty activists smuggled in seeds to grow urban gardens. Even when extremist groups such as Jabhat al-Nusra entered the camp, carrying out executions and assassinating local activists, these organizations continued to perform what relief work they could.

Last week, when IS invaded, all local organizations were forced to cease operations entirely.

“The danger for civilian volunteers was too great,” Nina Jafra, a representative of Jafra Foundation for Youth Development and Relief, one of a handful of local organizations delivering aid in Yarmouk, told GlobalPost in an email. “Our offices were raided the next day.”

Although Aknaf Beit al-Maqdis, the largest Palestinian militia inside of the camp, has resisted the invasion, IS has now arrested 150 civilians, kidnapped eight, and executed at least 10. Under the guise of fighting IS, the regime has dropped barrel bombs on the camp, adding to the civilian casualties.

As civilians are caught in the crossfire, injuries are mounting. Without access to hospitals or proper medical care, more and more wounds are becoming critical. Palestine Hospital, one of the camp’s two hospitals, which, even prior to the IS invasion, had only been operating at 10 percent capacity due to the lack of medical supplies resulting from the siege, was forced to close when IS militants kidnapped five of its civilian volunteers.

The building — centrally located in Yarmouk — is now occupied as their operational headquarters.

Now, most residents are staying home, out of fear of being arrested, kidnapped or killed. However, with no electricity, running water, or food supplies, this is only a temporary solution — and far from safe. Others have been able to flee to nearby towns such as Yelda, Beit Sahem and Babila, where Jafra Foundation and other local organizations have set up one temporary shelter and are working on others. However, as of this writing there has been no organized evacuation effort.

“Yarmouk is bombed by the regime several times a day and ISIS is beheading civilians. There is a double siege with no food, water, medication nor electricity,” Musaab Balchi, a representative of the Palestinian Network of Civil Society told GlobalPost.

“Our greatest fear is that this problem has no solution.”