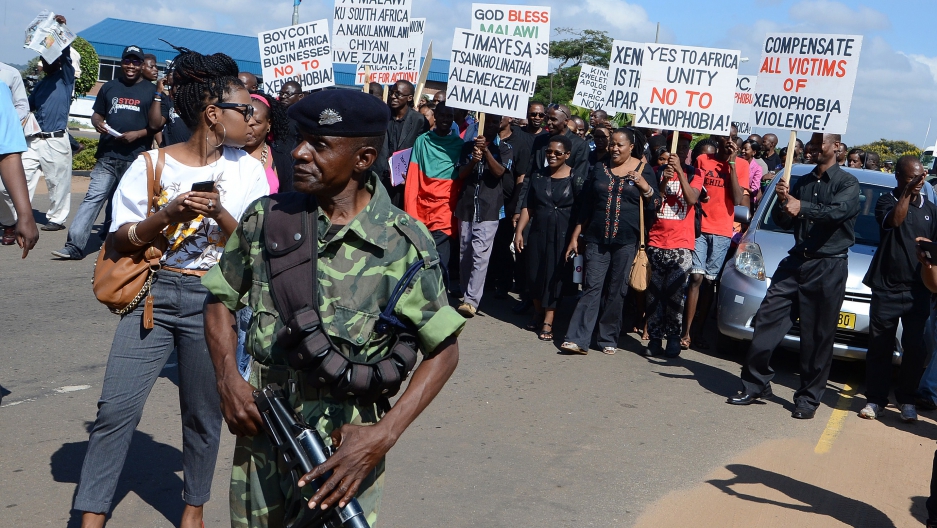 Malawians demonstrate in the streets of Lilongwe on April 21, 2015, against xenophobic attacks in South Africa.
Credit: Amos Gumulira
Share

JOHANNESBURG, South Africa — While South Africa insists it has calmed a recent spate of attacks on foreigners — mostly poor, black migrants — the blowback from other African countries is continuing.

Over the weekend, Nigeria summoned its top two envoys in South Africa back home over the xenophobic violence. In Malawi, activists have launched a month of “Black Friday” boycotts of South African shops. A radio station in Zambia is still refusing to play South African music.

Even before the latest violence, in which at least seven people were killed and thousands displaced, mostly in Durban and Johannesburg, South Africa was far from the most popular country on the continent.

Tucked down at the bottom of the African continent, South Africa is a beautiful country with a particularly ugly past. But it is the new South Africa, with leaders at times displaying a derisive attitude to the rest of Africa, that has so annoyed the neighbors.

Take, for example, an off-the-cuff remark made by President Jacob Zuma in 2013, defending his government’s plan to introduce highway tolls between Johannesburg and Pretoria.

"We can't think like Africans in Africa generally,” Zuma said. “We're in Johannesburg .... This is not some national road in Malawi.”

Or the sports minister’s comment last year, discussing racial transformation in the South African sporting world: while the country wants more black athletes on its national teams, “we wouldn’t be like Kenya and send athletes to the Olympics to drown in the pool,” Fikile Mbalula said.

Aside from the unnecessary put-downs, some Africans feel that their support of the African National Congress in the struggle against apartheid has been forgotten.

There are also questions over the ANC-led government's commitment to stamping out attacks on foreigners: during a wave of xenophobic violence in 2008, some 100,000 people were displaced and 62 killed. Few of these crimes were ever prosecuted.

In Nigeria, such criticisms — expressed in great numbers over Twitter and other social media — led the South African consulate general in Lagos to close its offices last week. There have also been protests and threats to boycott South African businesses in Mozambique and Zimbabwe.

In an apparent escalation of diplomatic tensions, Nigeria’s acting high commissioner and deputy high commissioner were summoned back to Abuja for consultations related to the xenophobia issue. South Africa’s international relations ministry lashed out in response, calling it an “unfortunate and regrettable” step.

According to Mzwandile Masina, the deputy minister for trade and industry, South Africa has lost billions of rands in export revenue since the attacks started earlier this month. South African companies, such as mobile phone firm MTN and supermarket chain Shoprite, have significant business interests on the continent — such as in Nigeria, the biggest economy.

Liesl Louw-Vaudran, a consultant with the Institute for Security Studies in Pretoria, writes that “privileged South Africans can no longer think of xenophobia as ‘a township problem.’”

“Given the blow to the country’s image and the threat to South African tourists and businesses abroad, it’s clear that it affects everyone."