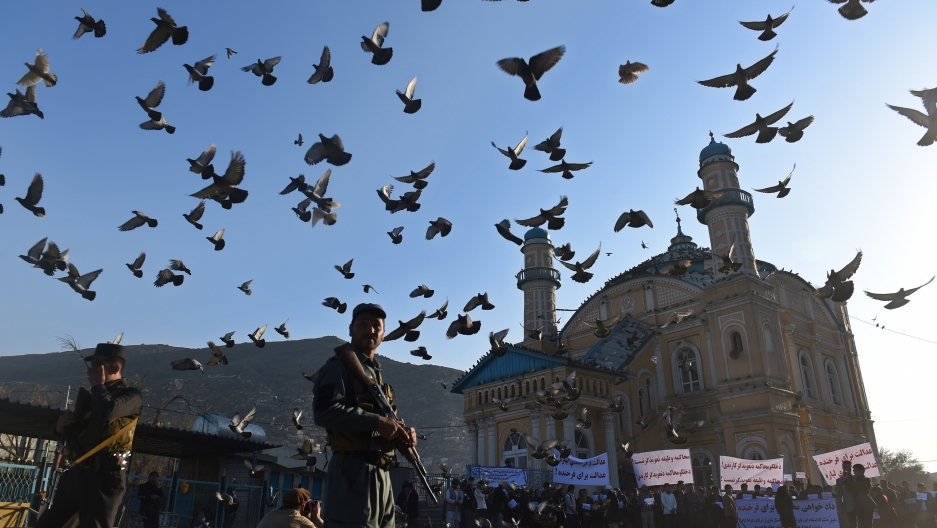 Afghan policemen keep watch as clergy attend a gathering at the Shahi Doshamshira mosque where Farkhunda, a 27-year-old Afghan woman, was beaten to death and her body set alight by a mob, in Kabul on March 26, 2015. The clergy condemned the killing and advised civil society groups to stop spreading hatred against religious leaders on social media.
Credit: Shah Marai
Share

KABUL, Afghanistan – Amina is one of thousands of Afghan women who have been jolted into action by the brutal murder of Farkhunda, a young religious scholar beaten to death by a savage mob in the center of Kabul on March 19.

“I am not the same girl that I was a week ago,” said Amina (not her real name). “Farkhunda’s death has changed me.”

The young woman’s dark eyes flashed as she told her story, an all-too-common tale of sexual harassment in Kabul.

“I was walking down the street dressed like I am today,” she said, gesturing to her jeans and long tunic, her hair modestly covered. “A boy said something bad to me. I usually pretend I do not hear, but this time I stopped, turned to him and said, ‘What do you want from me? You want to make me another Farkhunda? I am ready. Come on!”

The facts of Farkhunda’s death are still not clear. From various reports, it appears that Farkhunda, 27, confronted a local mullah about his practice of selling “tawiz,” or religious spells, used for everything from curing lovesickness to protecting one’s home from thieves.

The mullah, in turn, accused Farkhunda of burning the Holy Quran, inciting a group of street thugs to murder.

The act has sickened the nation, men and women alike. On social media, on radio and television, the anger is palpable. The courage of a small group of women, who defied centuries of tradition to carry Farkhunda’s body to her grave last Sunday, inspired thousands to turn out in the rain on Tuesday for one of the largest civil society demonstrations in Afghanistan’s history.

“It is a long overdue awakening in our society,” commented one young man who was in Tuesday’s crowd. In Afghanistan, 12 percent of women are literate, compared to 39 percent of men, according to the UN. And 94 percent of women over 25 are uneducated due in part to the fact that educating women was banned under the Taliban's rule. Meanwhile 87.2 percent of Afghan women report having experienced some form of violence in what has been called a "pandemic."

Afghan civil society seems to be flexing its muscles, and the effects are already being felt.

A prominent mullah, Ayaz Niyazi, who had spoken approvingly of the mob’s action, had since recanted. He did show up at Farkhunda’s burial, then was turned away by the women there. There are unconfirmed reports on social media that he went to the family to beg forgiveness for his words.

But little can or will be done without support from the government. President Ashraf Ghani has ordered a commission of inquiry, and the Interior Minister announced on Tuesday that 44 people had been arrested in connection with the case, including 17 policemen.

In his address to a joint session of the US Congress, the Afghan president promised that women’s rights would be protected.

“There is no point in talking about how much we respect women’s honor if we let threats go unpunished or allow harassment in our streets,” he said. “We have signed the global conventions to end violence and discrimination against women. We will implement them vigorously.”

He did, however, hint at the problem: “But work is still needed to convince our people that the protection of women’s rights is part and parcel of their won quest for social justice.”

Many women’s rights activists have been disappointed that Afghanistan’s First Lady Rula Ghani has not yet issued any statement condemning Farkhunda’s murder or promising that the perpetrators would be punished. Mrs. Ghani has taken a prominent role, with her own office and staff, unprecedented for politicians’ wives in this deeply conservative country. But on this issue she has kept in the background.

Despite the silence from the Arg, as the presidential palace in Kabul is known, civil society is bent on finding justice.

Some want revenge. “We should burn that mullah the way they burned Farkhunda,” one women’s rights activist was heard to say after Tuesday’s demonstration.

“I am not violent; I do not want to kill that mullah,” she said. “That is for the courts, the law. What I want is to have power.”

Amina comes from a highly educated family, but even there she faces discrimination.

“My brother told me to take my picture down from Facebook,” she said. “He told me he does not want other boys to see me. I told him to take his own pictures down, then I would,”

“Every time he tells me to take my pictures down, I add another one,” she added.

Amina says all the young women in her circle now feel the same way, and they will no longer tolerate the treatment they have borne in silence for so long. But gender equality, she says, is not enough.

“Men will never let us to be equal to them,” she sighs. “We need more power. We need to be higher than they are.”

Jean MacKenzie is the Afghanistan Country Director for Women for Women International. She previously worked as Kabul senior correspondent for GlobalPost, and is a contributor to The GroundTruth Project.