On Tuesday, the UN International Court of Justice delivered a long-awaited judgment on a yearslong dispute between Kenya and Somalia over their maritime boundaries in the Indian Ocean.

In the judgment, the court ruled largely in favor of Somalia by dismissing Kenya’s argument that Somalia had already agreed to its claimed boundary.

Instead, the court split the disputed triangular area — believed to be rich in oil, natural gas and valuable fisheries — in half.

“When countries have seen the potential of either offshore hydrocarbon or fisheries resources, [it] is then making them to become more interested in their maritime boundaries and the resources within it." 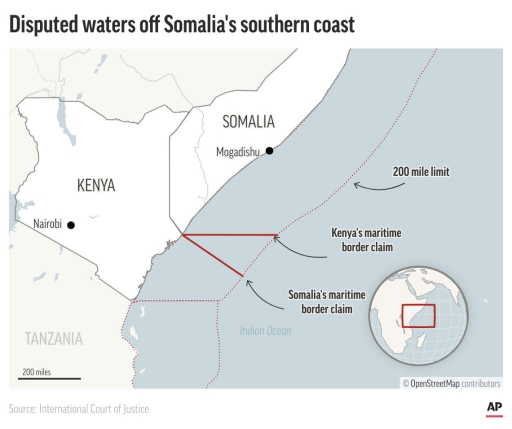 “When countries have seen the potential of either offshore hydrocarbon or fisheries resources, [it] is then making them to become more interested in their maritime boundaries and the resources within it,” noted Ifesinachi Okafor-Yarwood, a lecturer at the University of Saint Andrews who researches maritime security in Africa.

She said maritime boundaries are becoming increasingly contentious across Africa as countries seek to grow their blue economies.

People online were quick to cast this as a major win for Somalia.

Finally we made it. Thanks to all great lawyers who represented Somalia on the International Court of Justice. 12th October, our national flag day will be another historic day for all Somalis. pic.twitter.com/L5ZF3JewB8

But Kenya has been clear that it would not recognize any judgment by the court.

Last week, Kenya’s Foreign Affairs Permanent Secretary Macharia Kamau called it “the culmination of a flawed judicial process,” that would have a profound impact on regional security and politics.

“If you can't talk through disputes over your boundaries, how can you then sit together and collaborate on other issues?” Okafor-Yarwood said.

Cross-border collaboration on problems such as piracy, human trafficking and illegal fishing could be jeopardized by ongoing maritime disputes.

There are also concerns that a continued border dispute could impact the fight against terrorism in the region, as Kenya has troops in Somalia fighting against al-Shabab.

Related: Somali civilians bombed by US airstrikes, targeted by al-Shabab

Joint management zones are one possibility.

“Joint management agreement, or arrangement is two countries coming together to agree to manage resources in the disputed area jointly,” Okafor-Yarwood said.

Countries like Senegal and Guinea Bissau have used this to solve maritime disputes in the past.

While the court verdict is final, it’s not enforceable. All eyes will be on what the two countries do next.