Friday marks the end of the weeklong window for candidates to file paperwork to run for president of the Philippines in next year’s general elections — to be held on May 9, 2022.

As many analysts anticipated, the list of those who aspire to hold the Southeast Asian country’s highest office does not disappoint in terms of celebrity or political prowess.

Related: Philippine president reverses threat to void defense deal with the US

The winner will replace the current president, Rodrigo Duterte, who says he is retiring from politics. Since Rodrigo Duterte took office in 2016, the bombastic and crass populist has launched an anti-drug war that’s led to the extrajudicial killings of thousands of Filipinos; turned the country away from a long-standing relationship with the United States; and brought Manila closer into China’s orbit (a move that has proven unsuccessful and unpopular). Also, Rodrigo Duterte's time in office has been punctuated by several incidents of publicly insulting women and joking about murder and rape.

Related: Rights activists hope to end deadly war on drugs in the Philippines

Analysts say his administration will end with mixed results, particularly when it comes to some of the biggest campaign promises such as eradicating the Philippines’ drug problem, ending the insurgencies afflicting the country and infrastructure improvements.

On Friday, six candidates had filed to run for president in the Philippines. The list includes the current mayor of the city of Manila (a former actor promoting himself as a “unifying candidate”) and two former chiefs of the Philippine National Police — both of whom are known for carrying out controversial policies backed by Rodrigo Duterte: the war against drugs and the Anti-Terrorism Act of 2020.

Among the biggest names in the race is Philippine Vice President Leni Robredo. As the leader of the main opposition to the current administration, Robredo’s working relationship with Rodrigo Duterte hasn’t been easy. Over the years, the two have often come into conflict over not just policy, but also the president’s behavior. Upon the 56-year-old human rights lawyer’s announcement this week that she plans to run for president, social media was there to support her.

Political analyst Victor Andreas “Dindo” Manhit, head of the Manila-based think tank Stratbase ADR Institute, said Robredo is in the best position to cast herself as a true alternative to the last six years. Everyone else, he said, will be fighting for centrist votes “who are neither pro-Duterte or pro-opposition.”

“The rest will try to position themselves as independent from Duterte, with the exception maybe of Bongbong Marcos, who has been aligned with the president since 2016,” he told The World. 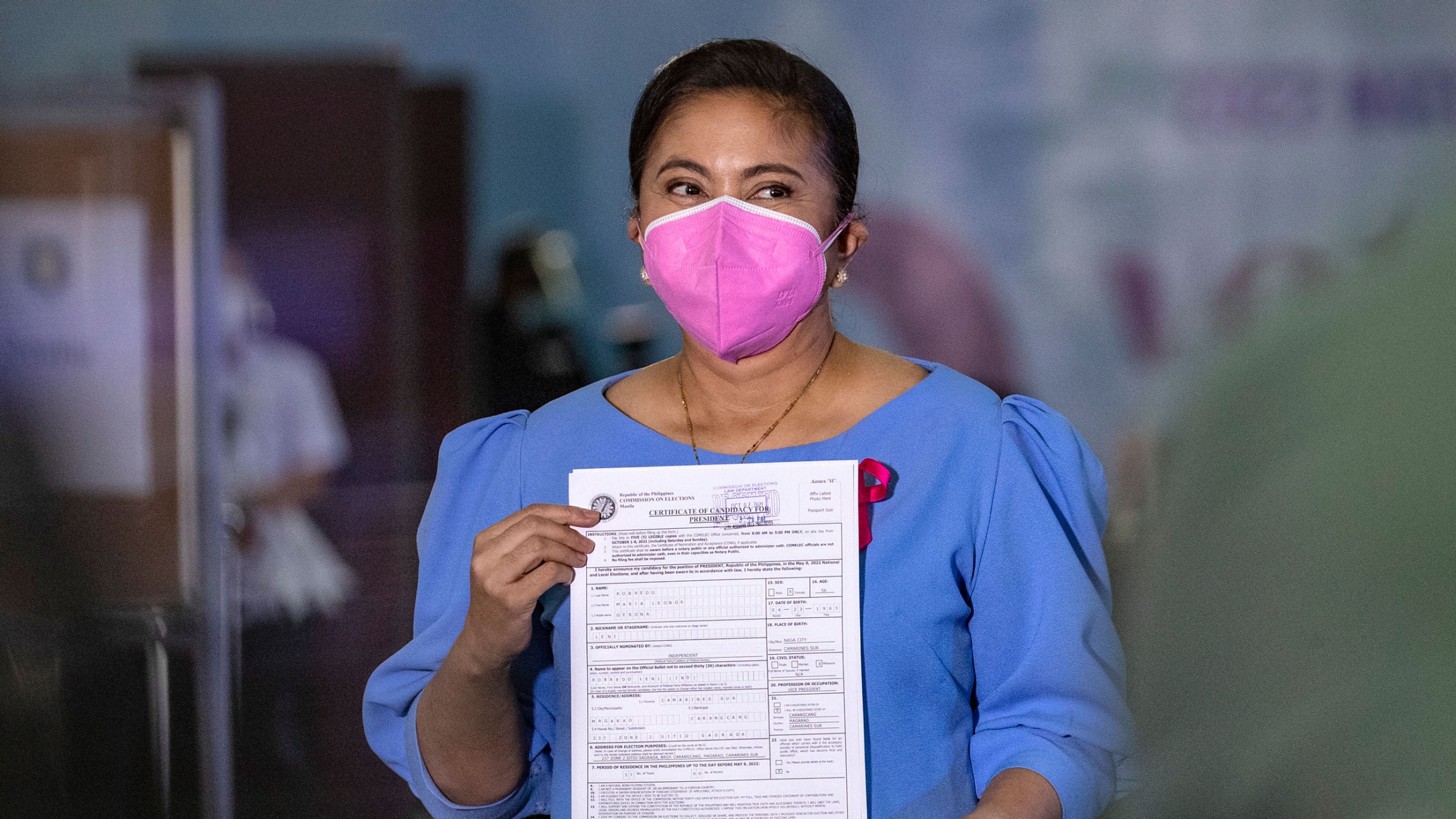 Philippine Vice President Leni Robredo poses after filing her certificate of candidacy for next year's presidential elections before the Commission on Elections at the Sofitel Harbor Garden Tent in Metropolitan Manila on Thursday, Oct. 7, 2021.

Bongbong Marcos’ father, former dictator Ferdinand Marcos, ruled the Philippines between 1966 and 1986, during which martial law was declared for nearly 10 years. Government corruption ran rampant and practically anyone opposing the regime was detained. The Marcos family, who have been accused of stealing some $10 billion from the Filipino people, were finally ousted in 1986, and the family fled to Hawaii.

Bongbong Marcos has been in politics since before his father was overthrown, but nothing truly defining during that time, Manhit said. Meanwhile, the reaction to the 64-year-old running for president hasn’t yet set in with the Filipino people, because it’s still “too early,” Manhit said.

However, some experts, including Manhit, have noticed an increase in misinformation about what happened during the Marcos dictatorship creeping up on social media in the last few years. Manhit said this is concerning because of the way social media was wielded by the Rodrigo Duterte campaign during the 2016 election. 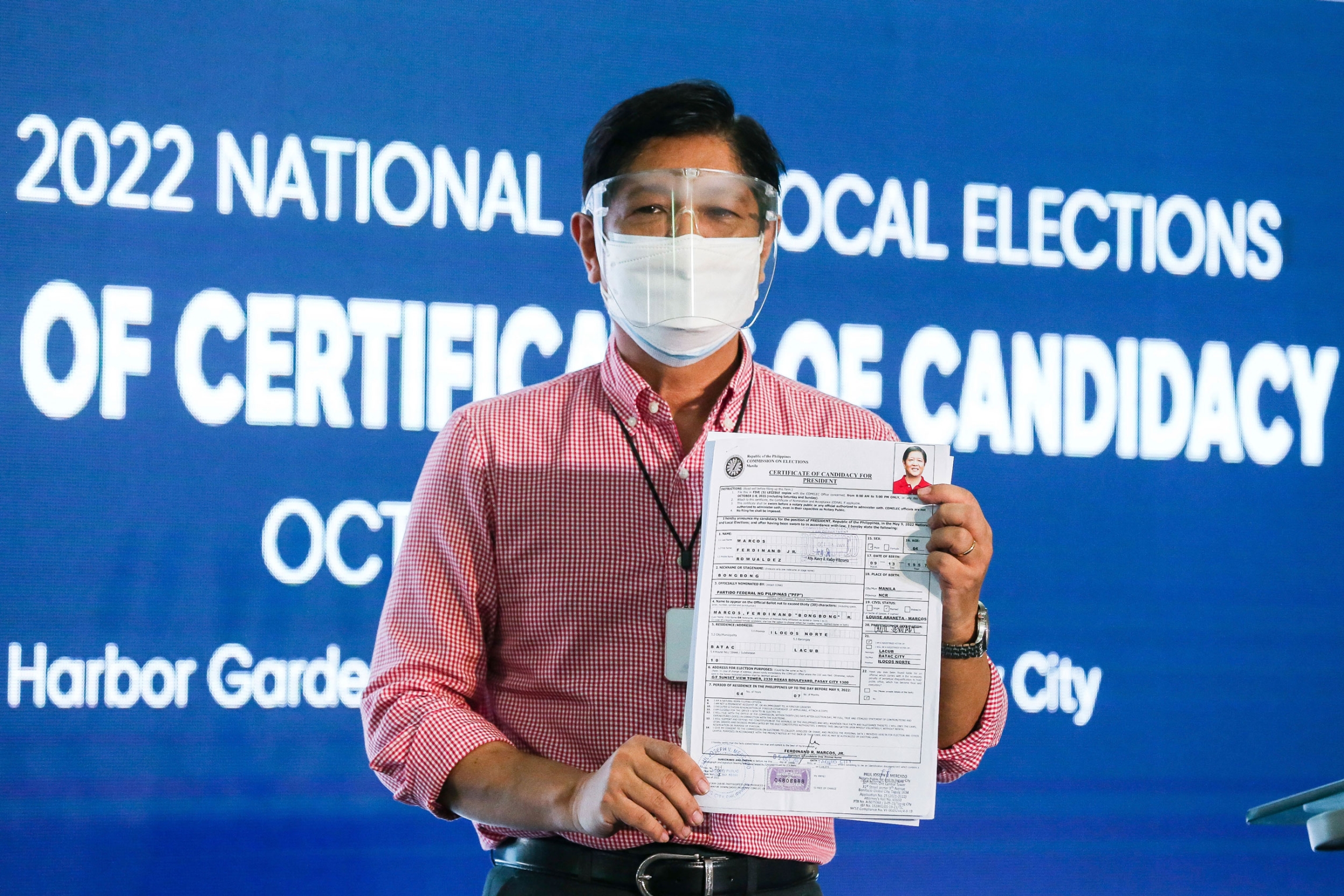 Former senator Ferdinand "Bongbong" Marcos Jr. poses after filing his certificate of candidacy for next year's presidential elections with the Commission on Elections at the Sofitel Harbor Garden Tent in Manila, Philippines Wednesday, Oct. 6, 2021.

Also running is the former Sen. Manuel "Manny" Pacquiao, a world-renowned boxing champ with 12 major world titles and a slew of other accolades that make him one of the greatest boxers of all time.

Pacquiao, 42, has been in politics for just over a decade as both a representative and a senator. But even though everyone knows his name, and he has a rags-to-riches story that many can relate to, Camille Elemia, a former reporter for the media outlet Rappler who has covered his political career, said he didn’t do much with his time in office.

“In terms of, like, real political output, a political difference. In fact, he was absent all the time,” she said. “Not just because he was boxing ... He didn’t take it seriously back then.”

Elemia said moving forward, the challenge for Pacquiao’s team will be translating his lack of a resume into actual votes. Which might be tricky, she said, because even though Pacquiao was once closely aligned with Rodrigo Duterte, he’s started to forge his own political path and not much is known about his policy stances. 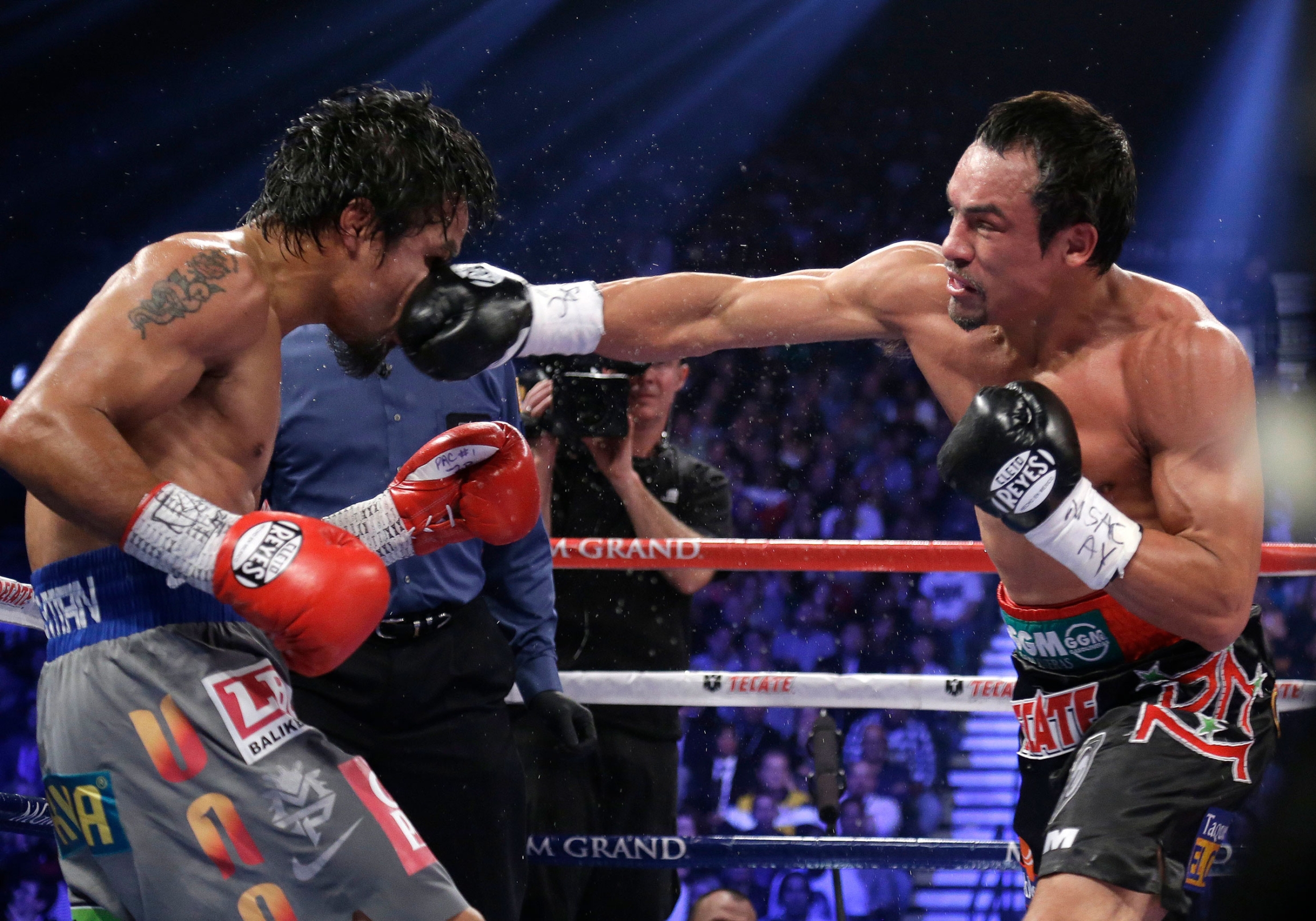 In this Dec. 8, 2012 file photo, Mexico's Juan Manuel Marquez lands a right to the head of Manny Pacquiao, from the Philippines, during their WBO world welterweight fight, in Las Vegas.

Sara Duterte-Carpio, the 43-year-old daughter of the current president, Rodrigo Duterte, has only filed to run for reelection as mayor of Davao City. This is despite many rumors that she would run for president to replace her father — rumors her father perpetuates. However, just because the filing window has closed, Sara Duterte still has an opportunity to run because substitutions in the lineup can be made up until mid-November. 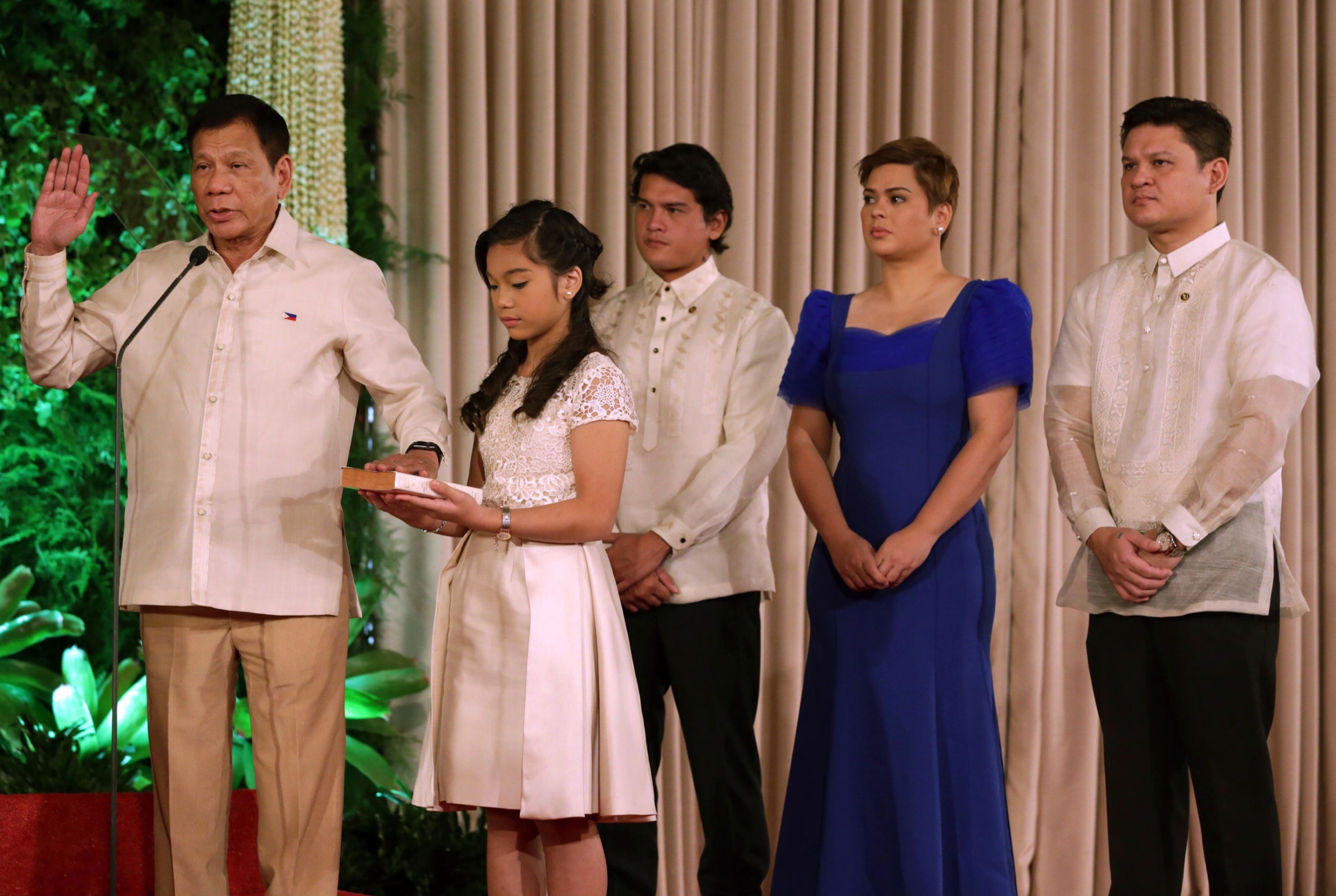 Experts say that continuing to manage COVID-19 will likely be the biggest campaign issue. Rodrigo Duterte has been slammed for his handling of the pandemic, causing him to lose some popularity as his administration comes to an end, according to polling.

Related: Vaccine hesitancy: A nationwide challenge in the Philippines

The Philippines still has the second-highest case count of the coronavirus in Southeast Asia and the vaccine rollout has been slow — only about 22% of the population of nearly 110 million is fully vaccinated.

Meanwhile, the country has been in various stages of lockdown since March 2020, which means economic recovery will be another important issue during the election.