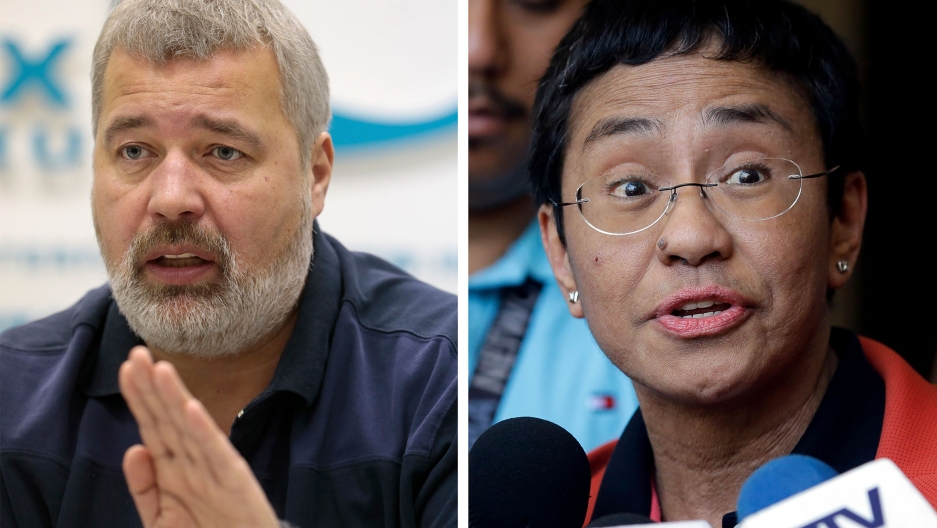 A combo of file images of Novaya Gazeta editor Dmitry Muratov, left, and of Rappler CEO and Executive Editor Maria Ressa, who were awarded the 2021 Nobel Peace Prize, Oct. 8, 2021.

Nobel Prize
Journalists Maria Ressa of the Philippines and Dmitry Muratov of Russia have been awarded this year’s Nobel Peace Prize. “Free, independent and fact-based journalism serves to protect against abuse of power, lies and war propaganda,” said Berit Reiss-Andersen of the Norwegian Nobel Committee. Ressa co-founded Rappler in 2012, a news website critical of President Rodrigo Duterte's controversial war on drugs campaign. And Muratov was one of the founders of the independent Russian newspaper Novaya Gazeta in 1993, which the Nobel committee described as “the most independent newspaper in Russia today, with a fundamentally critical attitude towards power.” It’s the same newspaper where journalist Anna Politkovskaya worked, covering the bloody conflict in Chechnya, before she was killed in 2006.

Afghanistan
Another explosion at a mosque in Afghanistan has killed at least 20 people and injured more than 90 others. The blast went off during Friday prayers at a Shia mosque in Kunduz in northern Afghanistan. No group has yet claimed responsibility, but Taliban chief spokesman Zabihullah Mujahid said Taliban special forces at the scene were investigating the incident. The bombing comes days after an attack at the Eidgah mosque in Kabul — which the ISIS-K group took responsibility for — during funeral services for Mujahid’s mother.

Iraq
Iraqis will head to the polls this Sunday for parliamentary elections. Some have already begun early voting, including security personnel. It’s the first vote since protests broke out against the government in 2019, and since Iran’s Islamic Revolutionary Guard general Qasem Soleimani was assassinated in Baghdad in 2020. The vote was set to take place in 2022, but was moved forward as a concession to the protesters. There are more than 25 million eligible voters in Iraq, but many say they won’t vote because they don’t trust the established political parties. Corruption and mismanagement have left many people without work, proper health care, education or electricity. 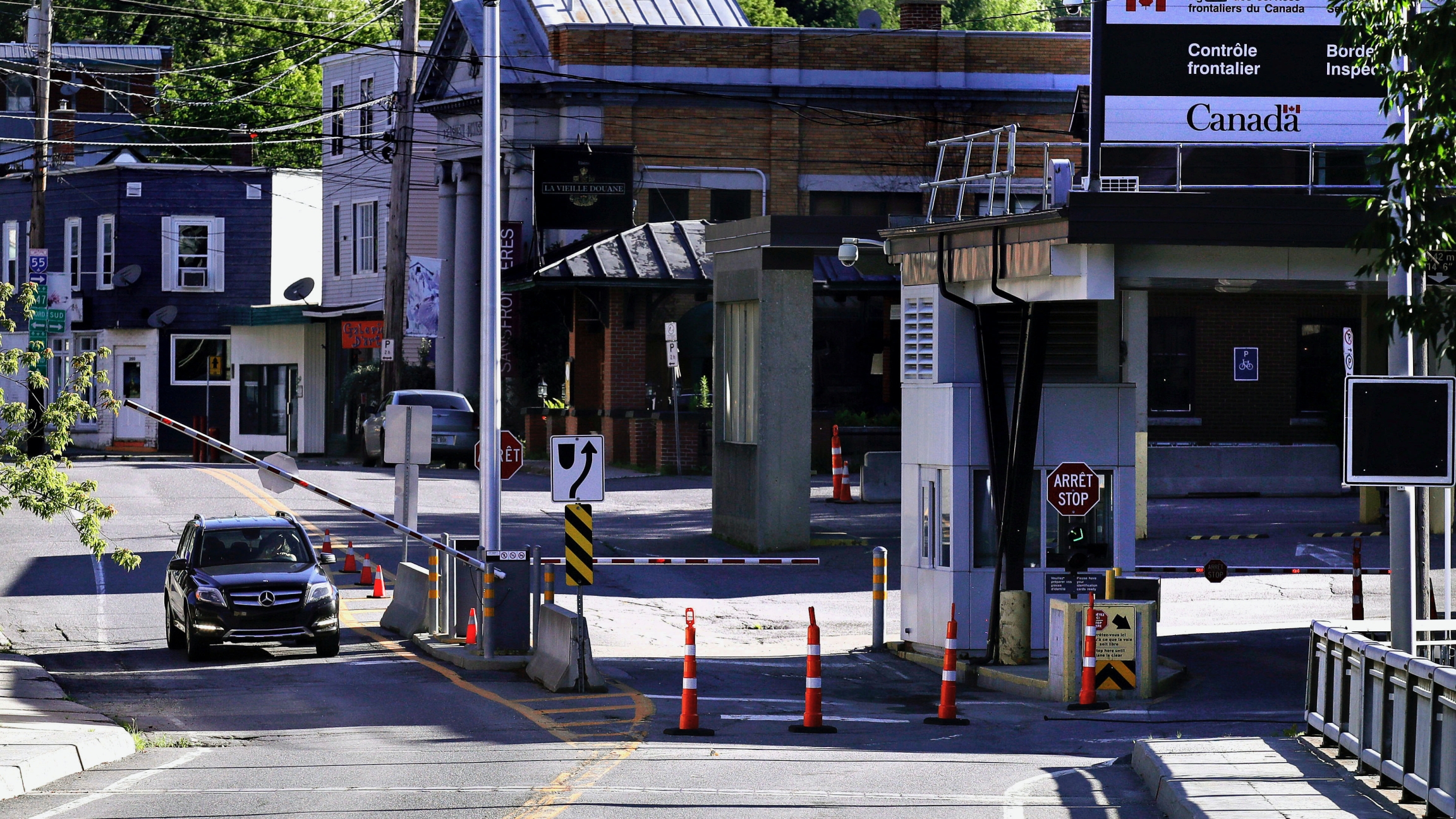 A vehicle in Canada waits for a gate to rise while crossing into Derby Line, Vt. from Stanstead, Quebec, July 11, 2018. Before the pandemic, Canada’s population was growing faster than any other G-7 country. Nearly all of that growth came from immigration. But last year, the pandemic got in the way. Because of border restrictions and a slowdown in services, immigration fell by half.

The number of immigrants coming to Canada dropped dramatically last year because of the pandemic. Now, the country is trying to boost immigration numbers by reducing the criteria to become a permanent Canadian resident. 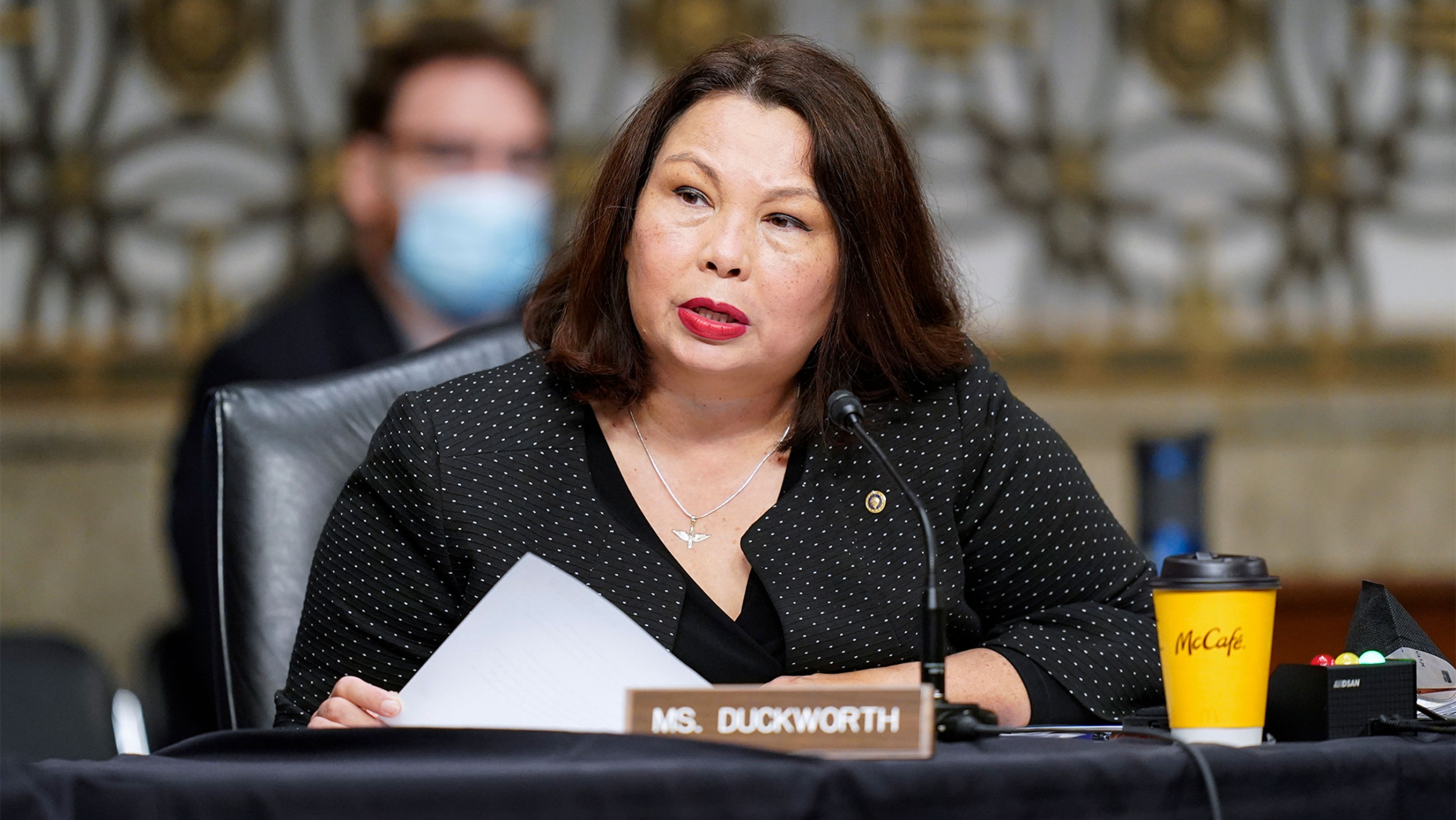 Democratic Senator Tammy Duckworth from Illinois speaks during a Senate Armed Services Committee hearing on the conclusion of military operations in Afghanistan and plans for future counterterrorism operations on Capitol Hill in Washington, Sept. 28, 2021.

Sen. Duckworth has called her proposal the Afghanistan War Study Commission. "I hope that it will achieve a comprehensive look at the various errors that have been made by all the different folks involved and gives us the lessons learned so that we don't enter into another quagmire like the one we've been in for 20 years in Afghanistan," Sen. Duckworth told The World's Marco Werman.

Car horns, ambulances, police cars and auto rickshaws: Traffic can be chaotic in India and Transport Minister Nitin Gadkari hates those chaotic sounds. He is working on a new law that will replace them with the sounds of Indian musical instruments — tablas, violins, flutes, the mouth organ and the harmonium. 🎧 Can you imagiine how traffic might sound if the law is passed? 🚗🚓 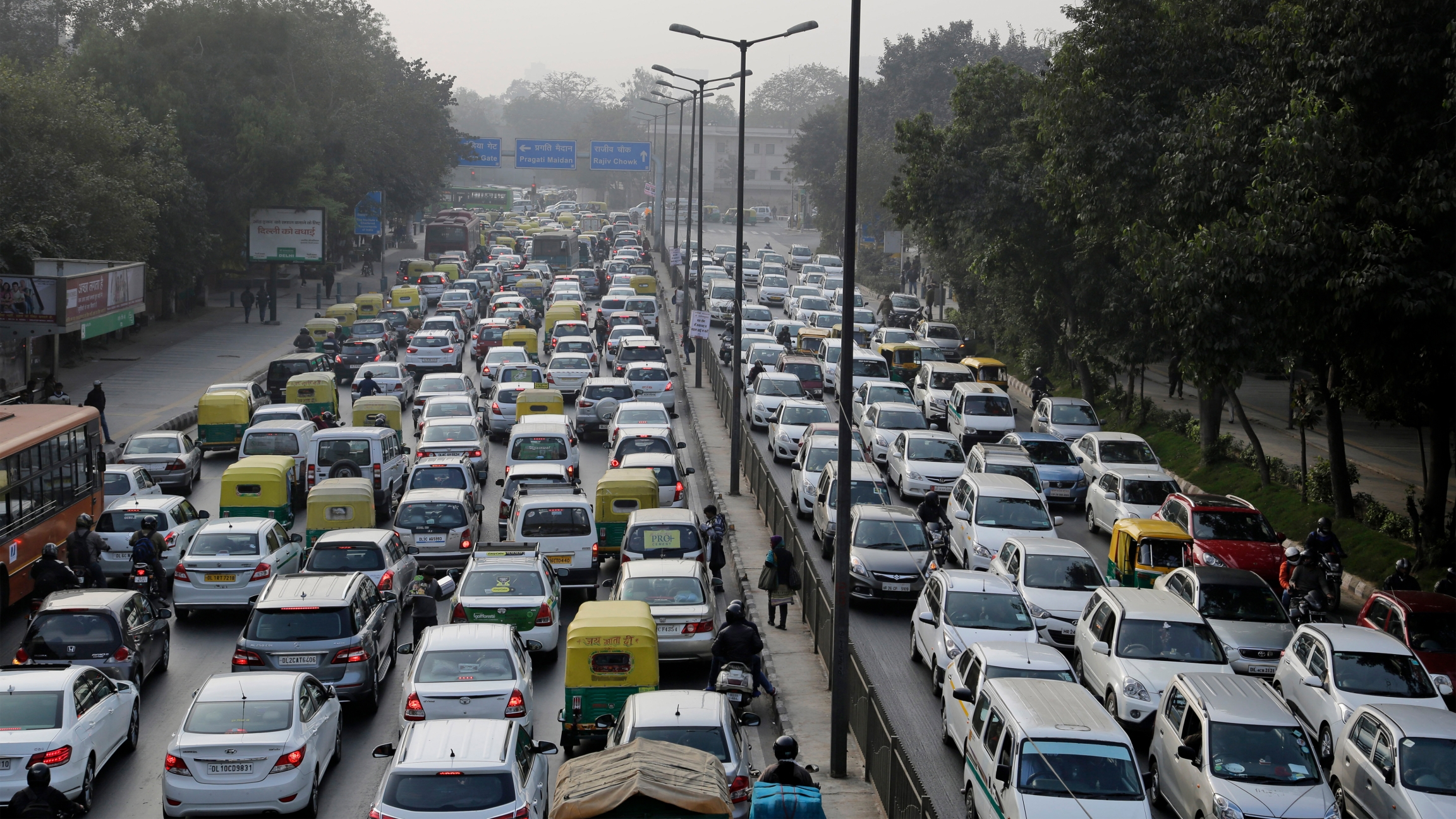 Vehicles move slowly through a traffic intersection after the end of a two-week experiment to reduce the number of cars to fight pollution in in New Delhi, India, Jan. 16, 2016 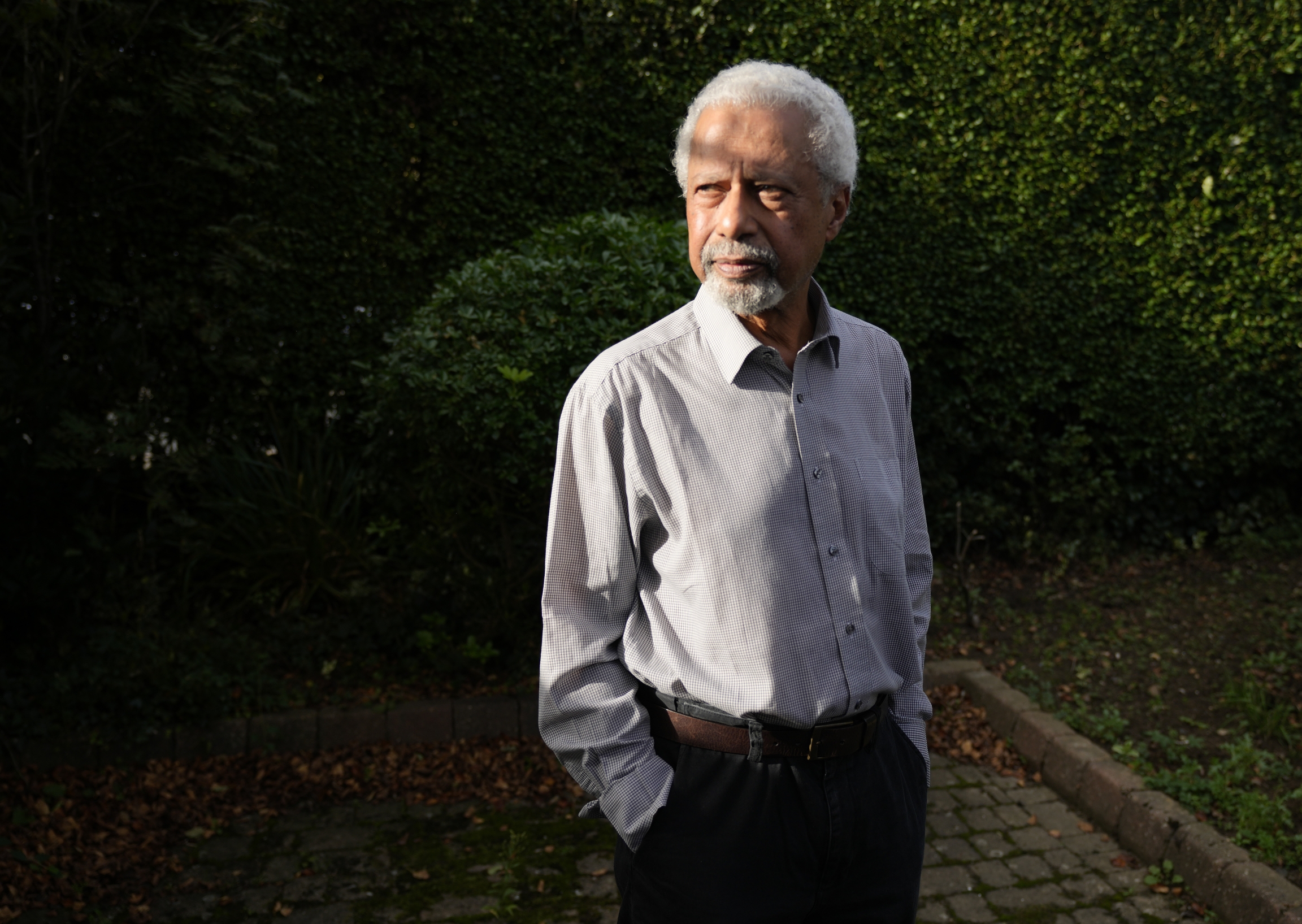 Tanzanian writer Abdulrazak Gurnah poses for a photo at his home in Canterbury, England, Oct. 7, 2021.

The Swedish Academy awarded the Nobel Prize for literature to novelist Abdulrazak Gurnah. The author of numerous novels who grew up in Zanzibar, Gurnah was selected for his "uncompromising and compassionate penetration of the effects of colonialism." And, many in the US are asking what went wrong in Afghanistan after two decades of war ended with Taliban rule. Illinois Sen. Tammy Duckworth is calling for a 9/11-style commission to look at the past 20 years of US involvement in Afghanistan.  Also, traffic in Indian cities can get really noisy with car horns and sirens blaring nonstop. Now, India's transport minister is working on a new law that would replace them with the soothing sounds of tablas and other Indian instruments.