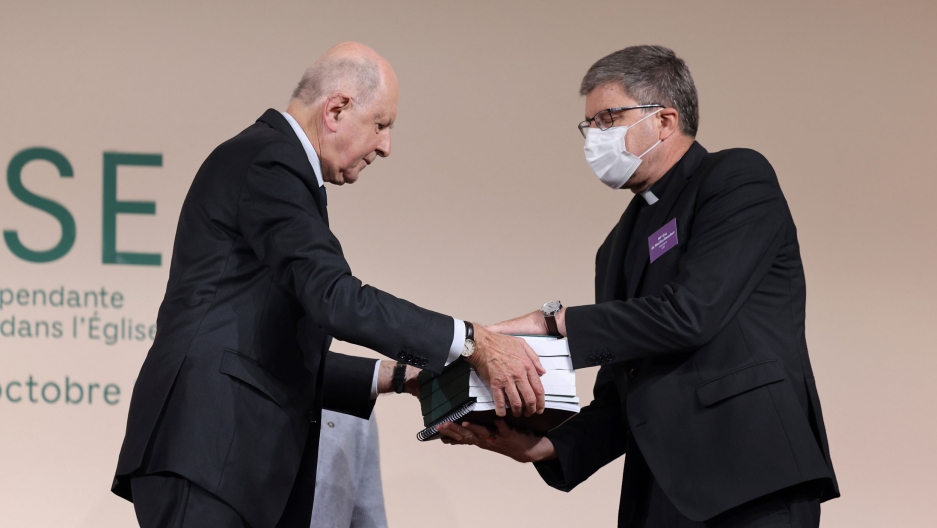 Commission president Jean-Marc Sauve, left, hands copies of the report to Catholic Bishop Eric de Moulins-Beaufort, president of the Bishops' Conference of France, during the publishing of a report by an independant commission into sexual abuse by church officials, Oct. 5, 2021.

France
A new probe has revealed that Roman Catholic clergy in France had sexually abused more than 200,000 children since 1950. The head of the commission that compiled the report said the Catholic Church had shown "deep, total and even cruel indifference for years," protecting itself instead of the victims in what became systemic abuse. Most of the victims were boys, many of them between the ages of 10 and 13. The damning report also revealed that the abuse was more widespread in France than previously thought, and the number of victims could be as high as 330,000 when including those committed by lay members of the Church, such as teachers at Catholic schools. Pope Francis said he “felt pain” over the findings in a statement released by the Vatican.

Facebook
Facebook and its associated apps, Instagram, WhatsApp and Messenger, went down for about six hours on Monday around the world. The company has apologized for the global outage, but the cause is still unknown. Many parts of the world  have become completely dependent on these technology platforms. In addition to not being able to chat with family and friends and post photos, the outage also disrupted critical connections including conducting business, providing medical care and holding virtual classes. The outage comes as the Federal Trade Commission in the US has filed an antitrust lawsuit against the company, accusing it of being a monopolist. According to Facebook’s own statistics, 2.76 billion people on average used at least one Facebook product each day just during the month of June.

Russia
Russia has reported a record number of COVID-19 deaths and infections for the fifth time in a week as it grapples with another surge caused by the highly infectious delta variant. The country has a vaccination rate below 30%, and health workers have blamed the resurgence on young people refusing to get vaccinated. Independent polls have shown that many remain skeptical of the Russian-made vaccines. Last month, President Vladimir Putin was forced to go into self-isolation after “several dozen people” in the president’s inner circle tested positive for the coronavirus. 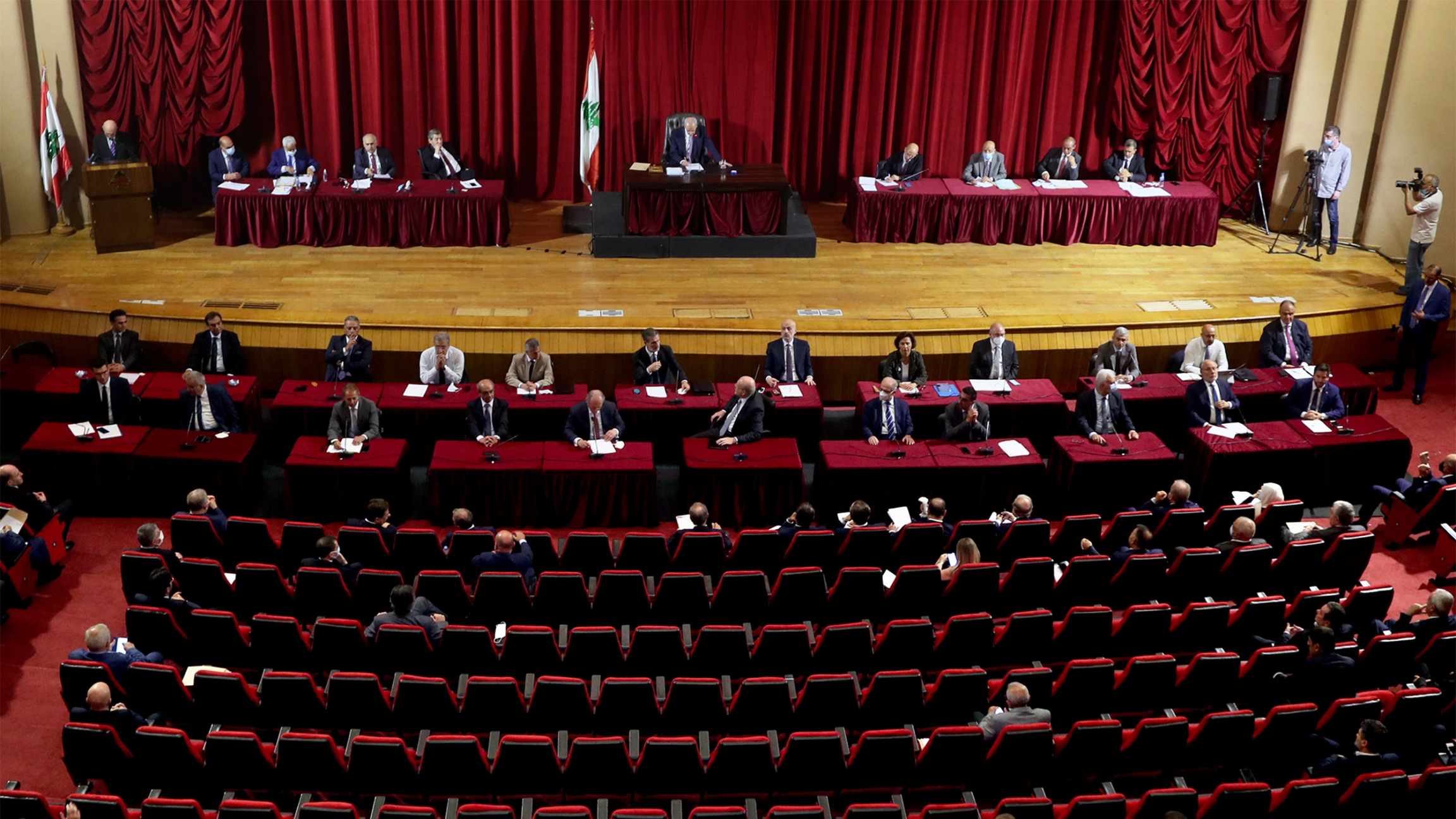 Parliament meets to confirm Lebanon's new government at a Beirut theater known as the UNESCO palace so that parliament members could observe social distancing measures imposed over the coronavirus pandemic, Lebanon, Sept. 20, 2021.

The "Pandora Papers" exposed offshore accounts of the rich and powerful around the globe, including members of Lebanon's elite. Alia Ibrahim, founder of Daraj Media, a team that helped bring the investigation to light, told The World's Marco Werman that they have been investigating the head of Lebanon's central bank, who "since the '90s has been taking his own money outside, while telling the Lebanese depositors and Arab depositors and others that the currency is very safe and that they can keep their money inside the banks," Ibrahim said.

"His own money is well-kept in safe havens, in real estate, etc., while the money of the depositors and the average citizen is locked in the bank and they can have no access to it whatsoever." 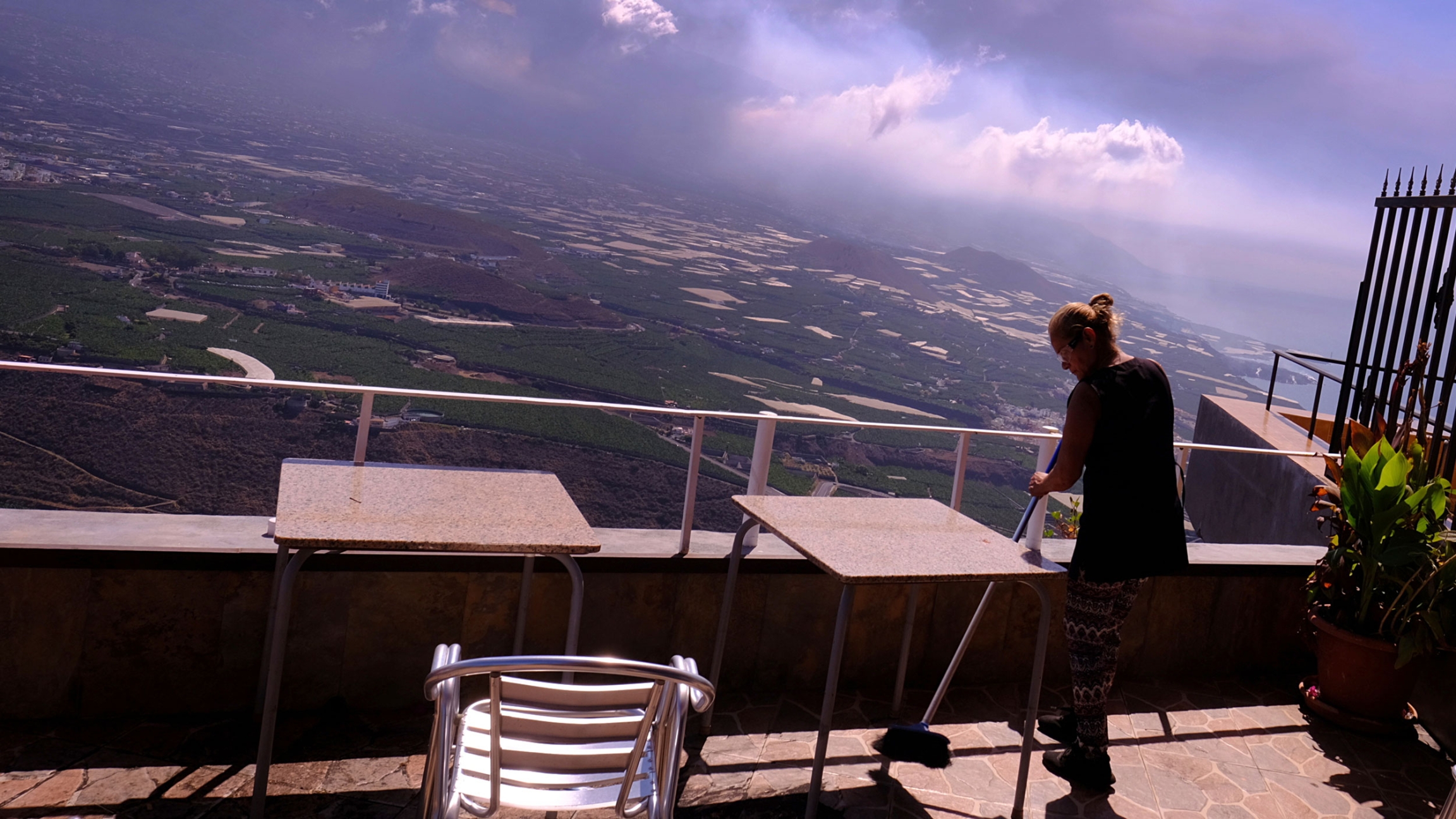 A worker cleans the ash from the tables of a restaurant as lava flows from a volcano on the Canary island of La Palma, Spain, Oct. 4, 2021.

It’s been more than two weeks since a volcano began erupting on the Spanish Canary Island of La Palma, leaving residents there worried about the coming weeks and months. The damage done to La Palma’s infrastructure alone is estimated to be at more than $20 million, according to local authorities.

Spain's Prime Minister Pedro Sánchez announced approval for a $239 million recovery plan for La Palma during his third visit to the island since the volcano erupted.

If you've been putting off getting your Master's degree, here's a new option. 🎓 The University of Liverpool is launching a Master's program on one of the most popular bands of all time: the Beatles. The program will focus on how attitudes toward the ever-popular group have changed in the decades since their founding. 🎧

Brb, moving to Liverpool to get my masters in The Beatles https://t.co/GjfklW8t0n 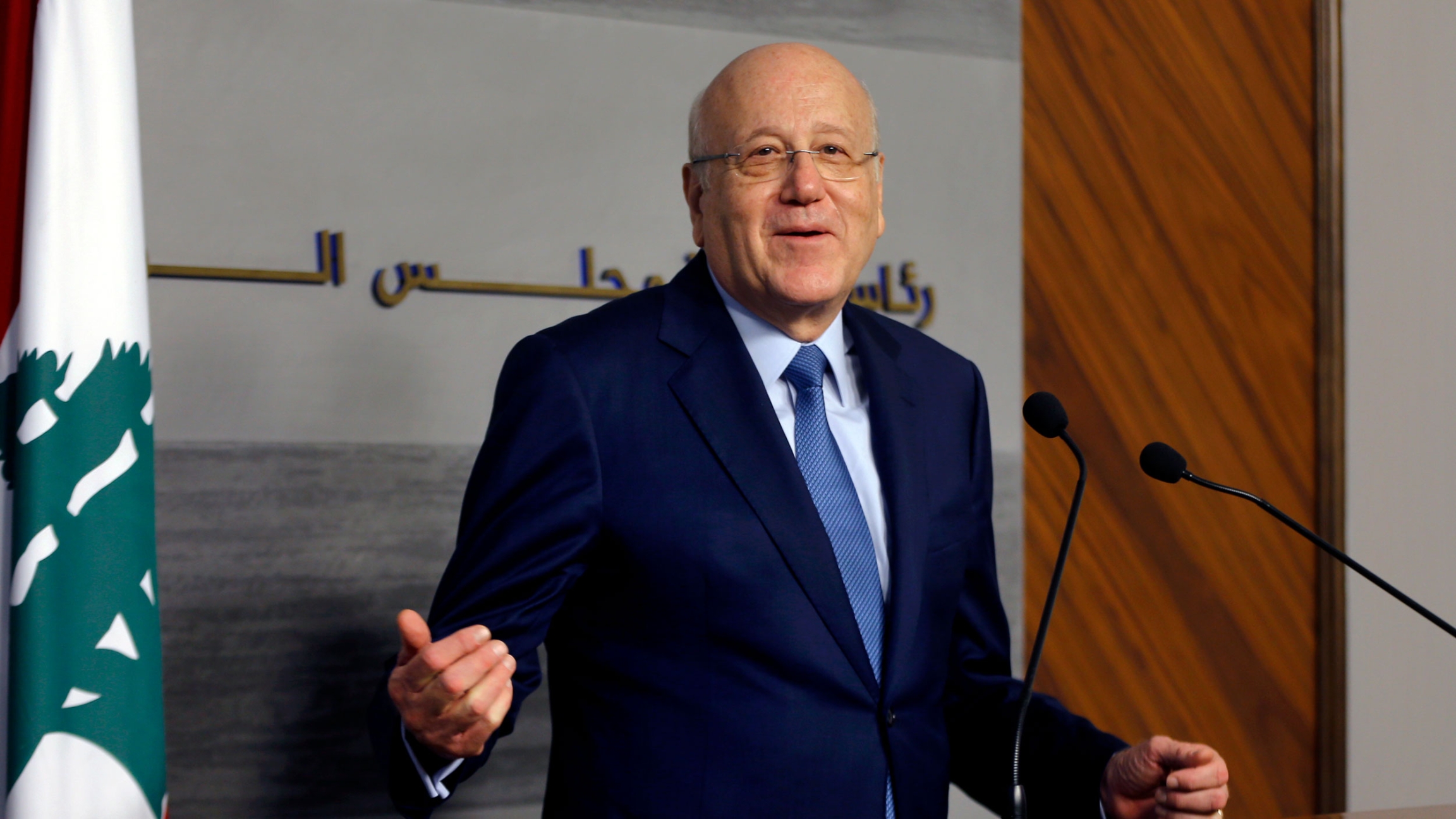 The "Pandora Papers" are being called the greatest-ever leak of secret deals and hidden assets. Top Lebanese officials are among the powerful whose secrets are revealed in the leak. And, confidence in British police has been shaken following the sentencing of a serving police officer for the kidnap, rape and murder of Sarah Everard in London last March. Advice to women on how to handle their fears of male police officers has proven “laughable” by some women's rights groups. Plus, The University of Liverpool is launching a master's program on one of the most popular bands of all time: the Beatles. The program will focus on how attitudes toward the ever-popular group have changed over the decades.