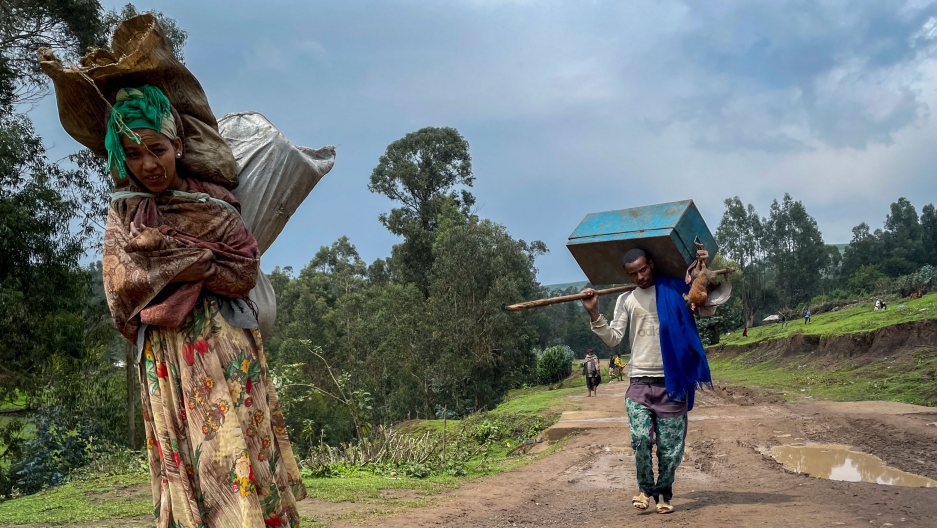 Senait Ambaw, left, who said her home had been destroyed by artillery, leaves by foot along a path near the village of Chenna Teklehaymanot, in northern Ethiopia, Sept. 9, 2021.

Ethiopia
Ethiopia has announced that it is expelling several UN officials, accusing them of “meddling" in the country's internal affairs. Global pressure and criticism have been growing on the Ethiopian government over its blockade of the country’s northern Tigray region, which has reduced aid deliveries to 10% of what is needed. The move comes days after the UN’s aid chief warned of a famine in the country. The restrictions will further curtail humanitarian access to the war-torn region of around 6 million people. Thousands of people have died and more than 2 million have been forced to flee their homes because of the 10-month conflict between Ethiopia's federal troops and forces loyal to the Tigray People's Liberation Front.

North Korea
North Korea has launched its fourth weapon in recent weeks, test-firing a new anti-aircraft missile, days after launching what is thought to be a hypersonic missile. This is being seen as a sign that Pyongyang has no intentions of slowing down its weapons development, despite strict sanctions. North Korea says the tests are for self-defense purposes, and has accused the US and South Korea of "double standards.” Diplomatic efforts to get the North to abandon its nuclear arsenal in return for economic and political rewards have largely been deadlocked since early 2019, further devastating the country’s  economy, already suffering from coronavirus-related setbacks.

Australia
Australia plans to gradually reopen all its borders by November, after 18 months of COVID-19 travel restrictions. Thousands of Australians had been left stranded abroad over a strict quota on arrivals. Prime Minister Scott Morrison announced that fully vaccinated citizens and permanent residents could return home “within weeks” as the nation meets 80% of its vaccine targets. Tough restrictions and strict lockdowns have helped the country to largely get the pandemic under control. Meanwhile, Japan has fully dropped its coronavirus state of emergency for the first time in more than six months as infections slow, in an attempt to help the pandemic-hit economy.

'Focus on adding life to years rather than years to life,' says aging expert 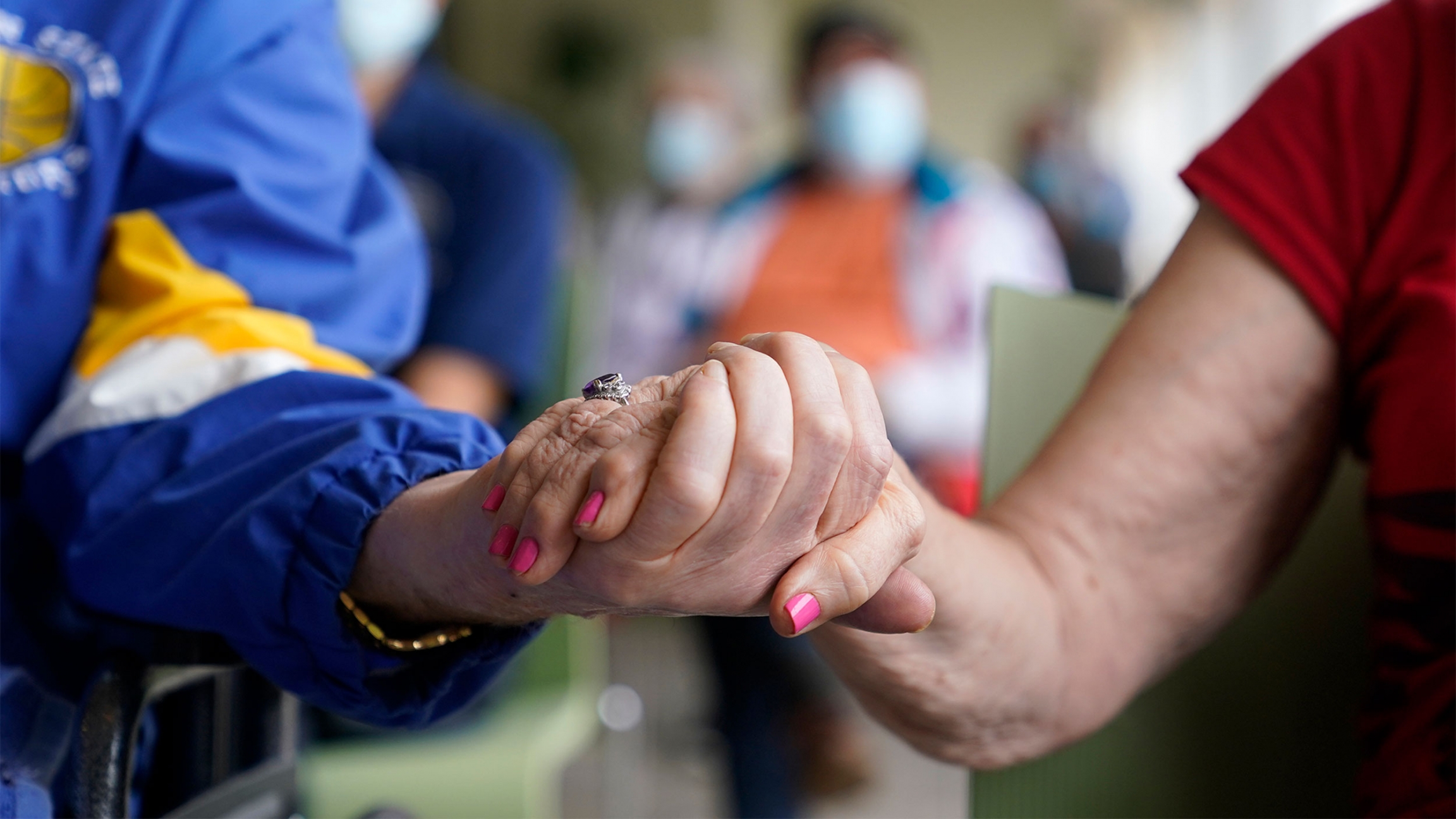 Residents Ken Fishman, 81, left, and Esther Wallach, 82, right, hold hands as they wait in line for the Pfizer-BioNTech COVID-19 vaccine at the The Palace assisted living facility in Coral Gables, Florida, Jan. 12, 2021.

Most people try to break Guinness World Records while they're still alive, but a family in the East African nation of Eritrea is trying to get Guinness to recognize their grandfather as the oldest man to have ever lived. Netabay Tinsiew died this week. He was 127 years old, according to his family.

The news begs questions about just how long humans can live? Dr. James Kirkland, director of the Robert and Arlene Kogod Center on Aging at the Mayo Clinic, told The World's host Marco Werman that the real focus in his field is, rather than looking at maximum lifespan, "to try and look at and improve what we call health span, the period during life when people are living free, independent and without multiple diseases and chronic pain," he said.

The perplexing acoustics of an art show in northwest Germany 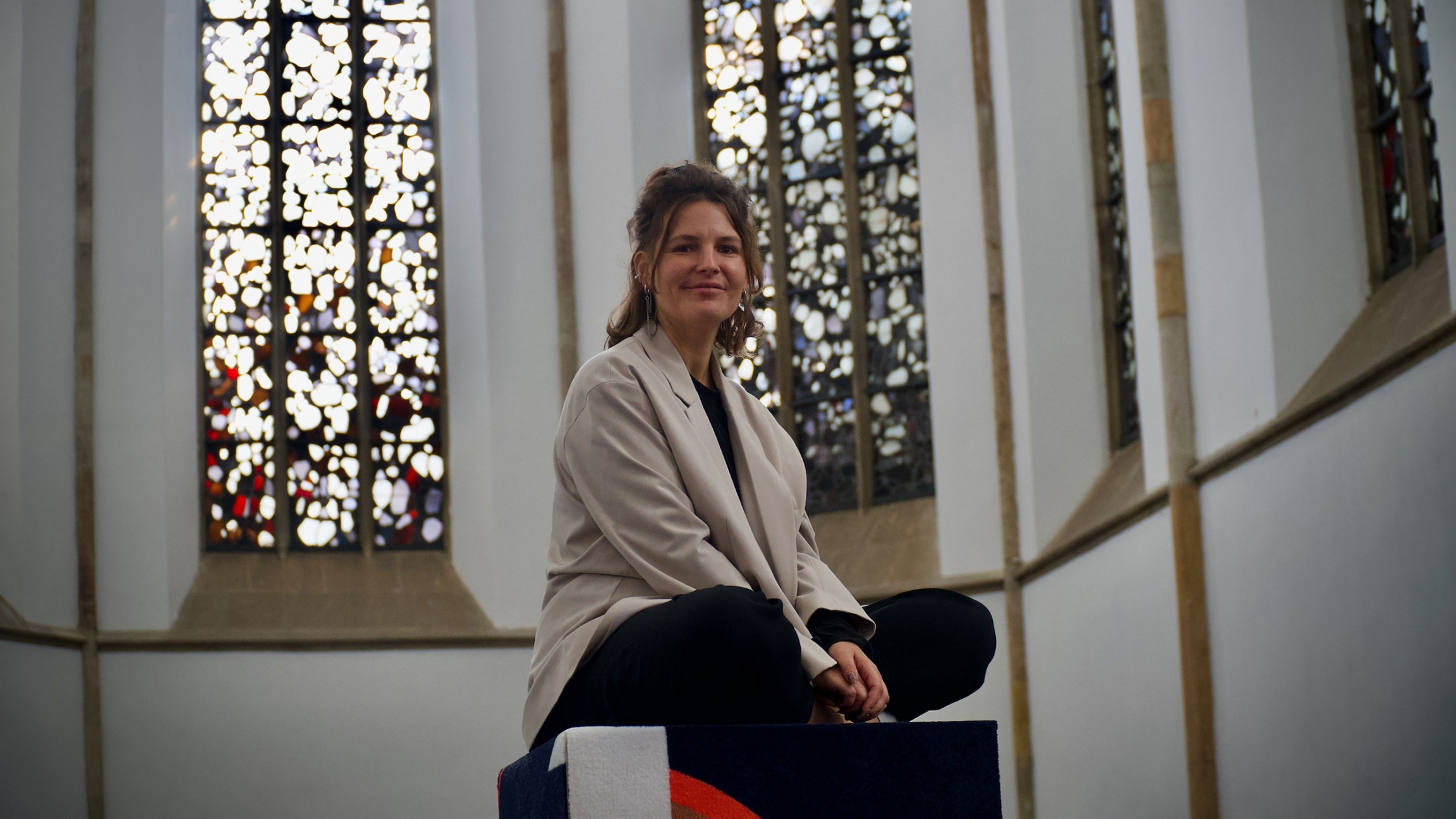 Visual artist and filmmaker Alison O’Daniel has worn hearing aids since she was three years old. The ones she has now are digital, and sometimes they give her a heightened sense of sound: A car engine hum becomes earsplitting. O'Daniel has spent most of her art career focused on recreating those jarring sounds. She said her latest exhibition in Germany is the best representation of how she hears.

Deforestation increased in Colombia last year. Hacienda El Bosque, a large dairy farm near the Colombian city of Manizales, is one of the dozens of Colombian farms that are taking a chance on nature tourism. The ranch used to get all of its income from selling milk. But it opened its doors to bird-watchers three years ago in order to generate new sources of income and turn conservation into a profitable venture as one way to stave off deforestation. 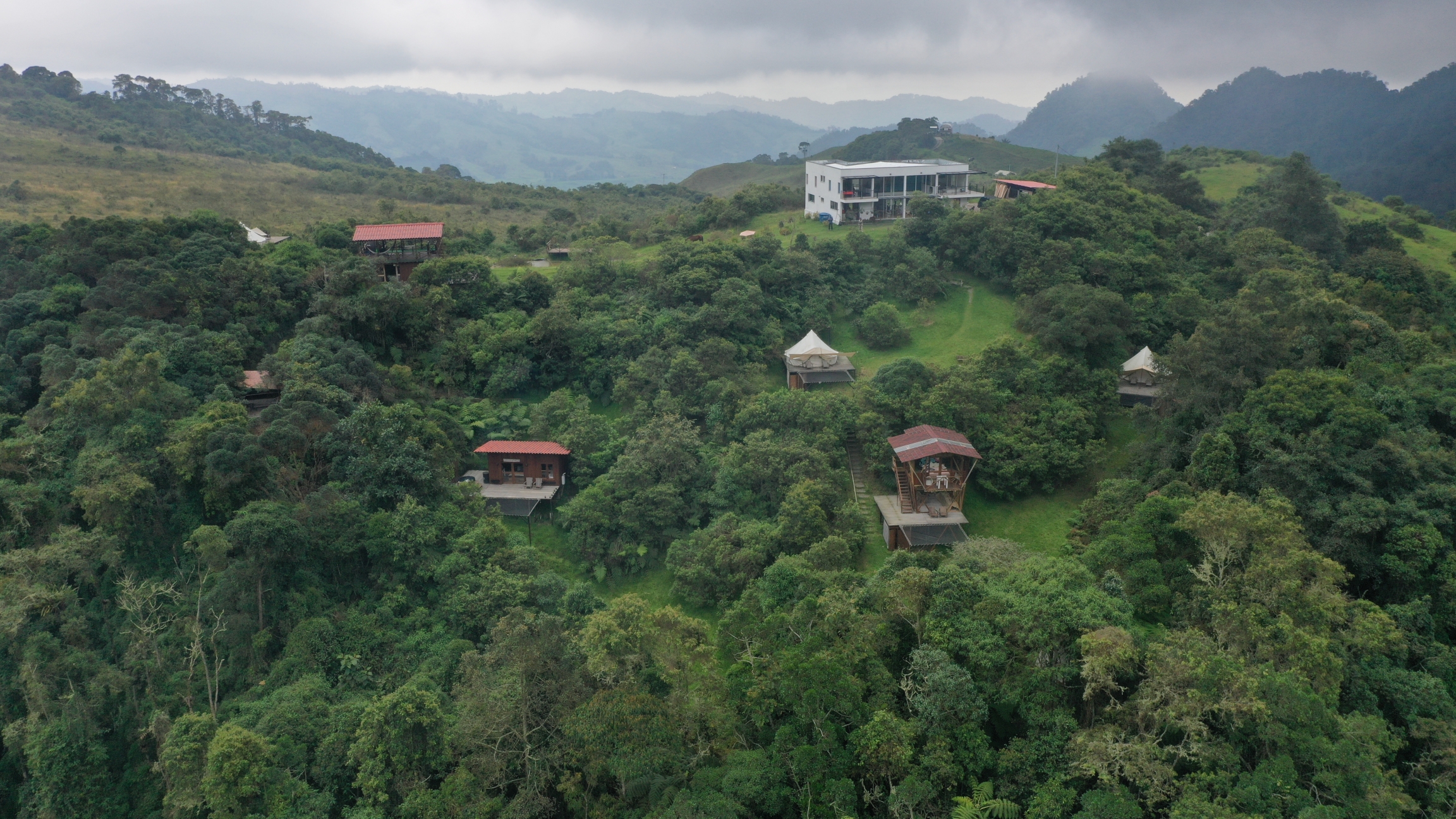 At El Color de Mis Reves, or The Color of My Dreams, in Colombia, most of the land is covered by cloud forests. The owner wants the forest to regrow to give the wildlife more space. 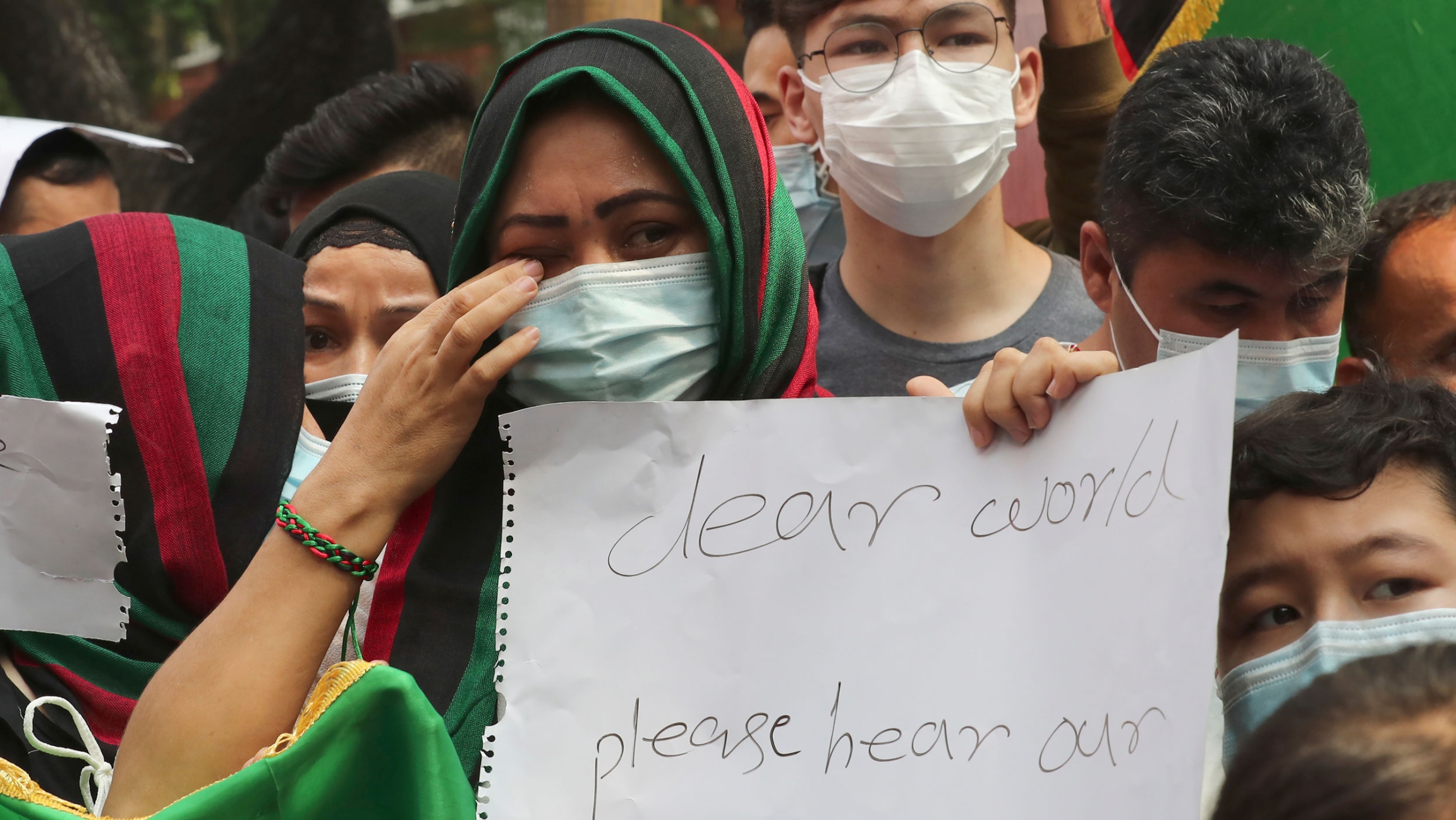 An Afghan woman weeps as she holds a poster during a rally outside the building that houses the UNHCR representative office in Jakarta, Indonesia, Aug. 24, 2021. Hundreds of Afghan refugees who live in Indonesia are mostly members of Afghanistan's Hazara ethnic minority.

Members of the Hazara ethnic group in Afghanistan have faced discrimination and violent attacks for a long time. Under the new reality of Taliban rule, things appear to be getting worse. And, for the first time, on Sept. 30, Canada will recognize a National Day of Truth and Reconciliation to honor the thousands of students who died at residential schools for Indigenous children between 1883 and 1996. Also, French wine growers will have a tough harvest this fall and a late frost destroyed much of their crops this past spring. But some are trying to adapt to climate change by trying to make their grapes more resistant to heat and drought.