On a late afternoon in a working class neighborhood in the north of Rio de Janeiro, Brazil, dozens of teenage boys dart across a huge abandoned field, dragging on seemingly endless lines of string.

Far above them, their kites dance and jerk in the sky, appearing as tiny butterflies, fluttering, or sharks swimming back and forth against a setting sun.

The boys kite-fight with the aim of cutting an opponent’s string first, using a special glass powder on the strings to sharpen them. Last kite in the sky wins. Each time a kite falls, the teens run to catch it.

Kite flying is not just a family activity in Brazil, it’s a passionate battle. Today, it’s considered one of Brazil’s most popular sports — that is, after soccer. As the pandemic forced people to socially isolate, schools were out and unemployment rose. As a result, more children — and adults — have taken to the skies. 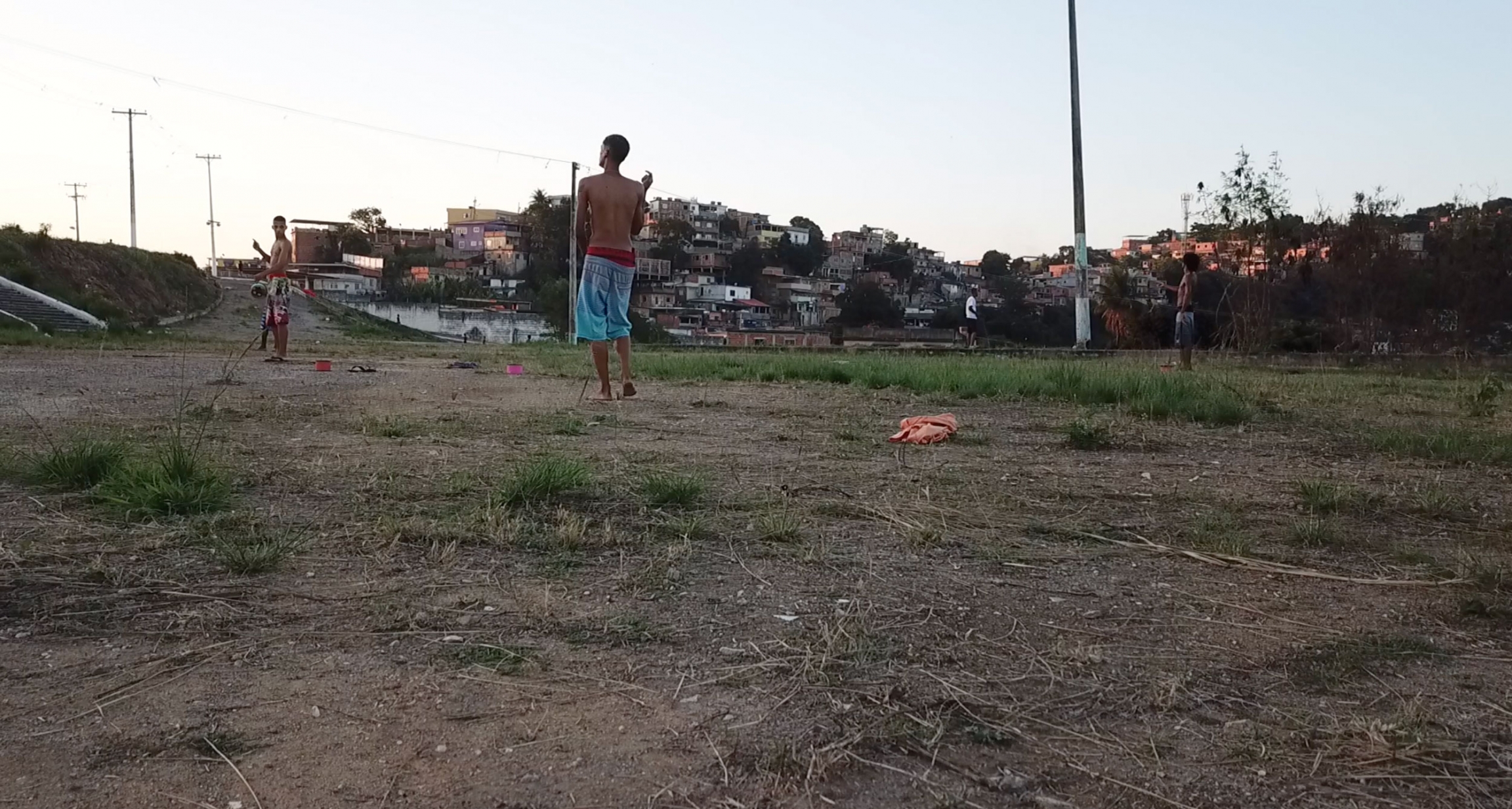 Teenage boys gather in an open field to fly kites in a Rio de Janeiro, Brazil.

Raphael Felipe Teixeira grew up in the 1990s, flying and making kites in Vila Medeiros, a poor neighborhood on the north side of Sāo Paulo.

“The pandemic awakened this interest I still had. ... Since I was at home, and had free time, I said, 'I’m going to make a kite.' I had no idea how big it would get."

“The pandemic awakened this interest I still had,” he said. “Since I was at home, and had free time, I said, 'I’m going to make a kite.' I had no idea how big it would get,” he said.

Today he makes high-end personalized kites, which he sells, and promotes over his Instagram and YouTube channel. Some of his kites, he said, can even run up to $20. That’s a lot. Kites in Brazil, even now, generally run between $.07 and $2. They’re made to be disposable — lost in competition.

The demand for high-end kites is a sign of the changing times. The sport is old, but the heightened interest is new.

An online video game known as “Pipa Combate,” or “Kite Fight,” where players battle before a background of iconic Rio de Janeiro destinations, has more than 34 million downloads.

There’s also a YouTube channel with the same name that has almost 2 million followers. The host travels to communities and kite competitions around the country.

These competitions and kite-flying teams are also new.

Manoel Roberto Cucher has made and sold kites out of his São Paulo store, Moleza Pipas — Easy Kites — for 35 years. He sent The World a picture of a group of men in their 30s and 40s holding tiny trophies won at a São Paulo kite-flying competition over the weekend.

A group of older men pose after a kite-fighting competition.

"Look at the age of the kids who fly kites today,” he joked in a voice message he sent over WhatsApp.

“With the pandemic, people began to fight kites as a group. Before, it was every man for himself. One person on the street, battling the guy down the block."

“With the pandemic, people began to fight kites as a group. Before, it was every man for himself. One person on the street, battling the guy down the block,” Cucher said.

But kite fighting comes with risk.

To cut each other's strings, kite fighters often use waxed lines with either crushed glass, or more expensive industrially produced strings made with quartz and aluminum oxide powder.

These are effective, but highly dangerous. Dozens are wounded or even killed each year when the kites are cut and the lines fall across roadsides. In June 2019, just one hospital in the state of Minas Gerais treated 13 people for cuts from strings.

“The line cut into my helmet,” one motorcyclist told a TV reporter in 2018. He said he was nearly blinded by the deep cut near his eyes.

These types of strings are now banned in Brazil, and police have taken some measures to crack down on their sale, but veteran kite maker Cucher said they’re still out there.

“It’s illegal to fly kites in Brazil with lines made with things that cut. You can’t produce, transport or house them, but you know how laws are in Brazil,” Cucher said. “In the middle of public squares, guys are there selling it.”

Some elected officials are now calling for designated kite-flying areas.

Meanwhile, kite-fighting enthusiasts grapple with this contradiction — as cut-throat competition takes on a new meaning.