As Manuela Schumacher walks through the ruins of her Eifelstube Restaurant in Bad Neuenahr-Ahrweiler in western Germany, she recalls every inch of a place that has been in her family since 1905.

On this patch of concrete, she says, there was a table for six. Beyond here, where a wall once stood, there was a kitchen where her husband would prepare her family’s recipes. The space was “cozy,” and could seat 50-60 people, she adds. 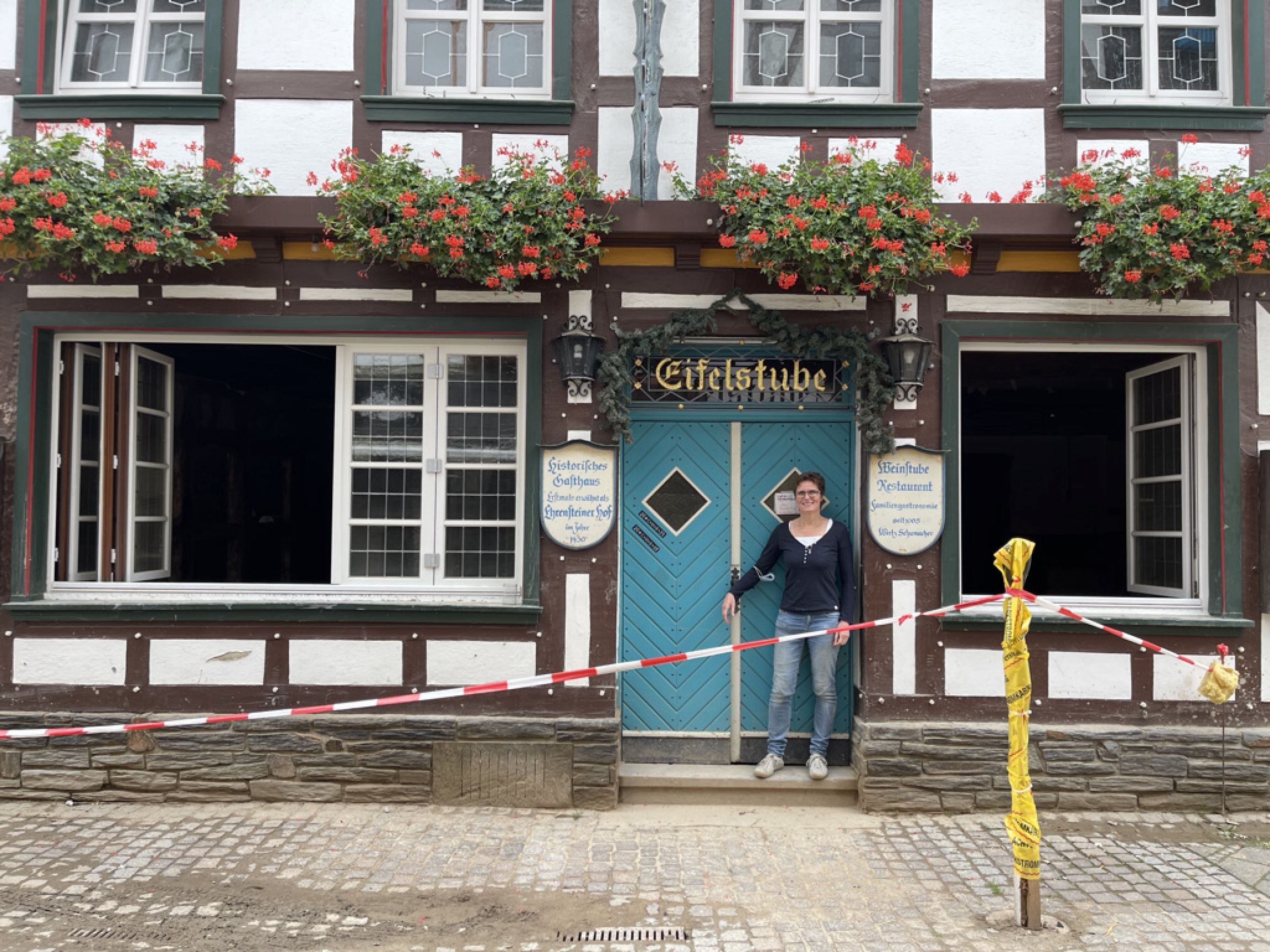 Manuela Schumacher stands amid the ruins of her Eifelstube Restaurant in Bad Neuenahr-Ahrweiler in western Germany in the aftermath of the flood.

Everything was damaged beyond repair in mid-July when the Ahr River flooded Schumacher’s town — it's considered to be the country’s worst natural disaster in more than half a century.

“Suddenly, we are standing in the water, and we don’t know why so quickly. We don’t understand it.”

“Suddenly, we are standing in the water, and we don’t know why so quickly,” Schumacher said in an interview with The World last week. “We don’t understand it.”

Her family survived, but many others in the town and surrounding communities didn’t. At least 189 people died in Germany; many more are still missing.

Those who remain face the daunting task of rebuilding what they have lost. But they have found a consistent source of support from unofficial channels — teams of volunteers who, two months on, continue to travel into the Ahr Valley to assist residents dealing with the flood’s aftermath.

The volunteers come from all over Germany and sometimes other countries. They clear mud from cellars, remove plaster from damaged homes, deliver essential goods and help local winemakers harvest their grapes.

Stefan Stahl owns a home construction business in Obernburg, Bavaria. It takes him 3 1/2  hours to reach Schumacher’s Eifelstube Restaurant, which he and his colleagues are helping rebuild.

While watching TV reports about the flood, “I [saw] the Eifelstube needs help, and I come here,” he said. 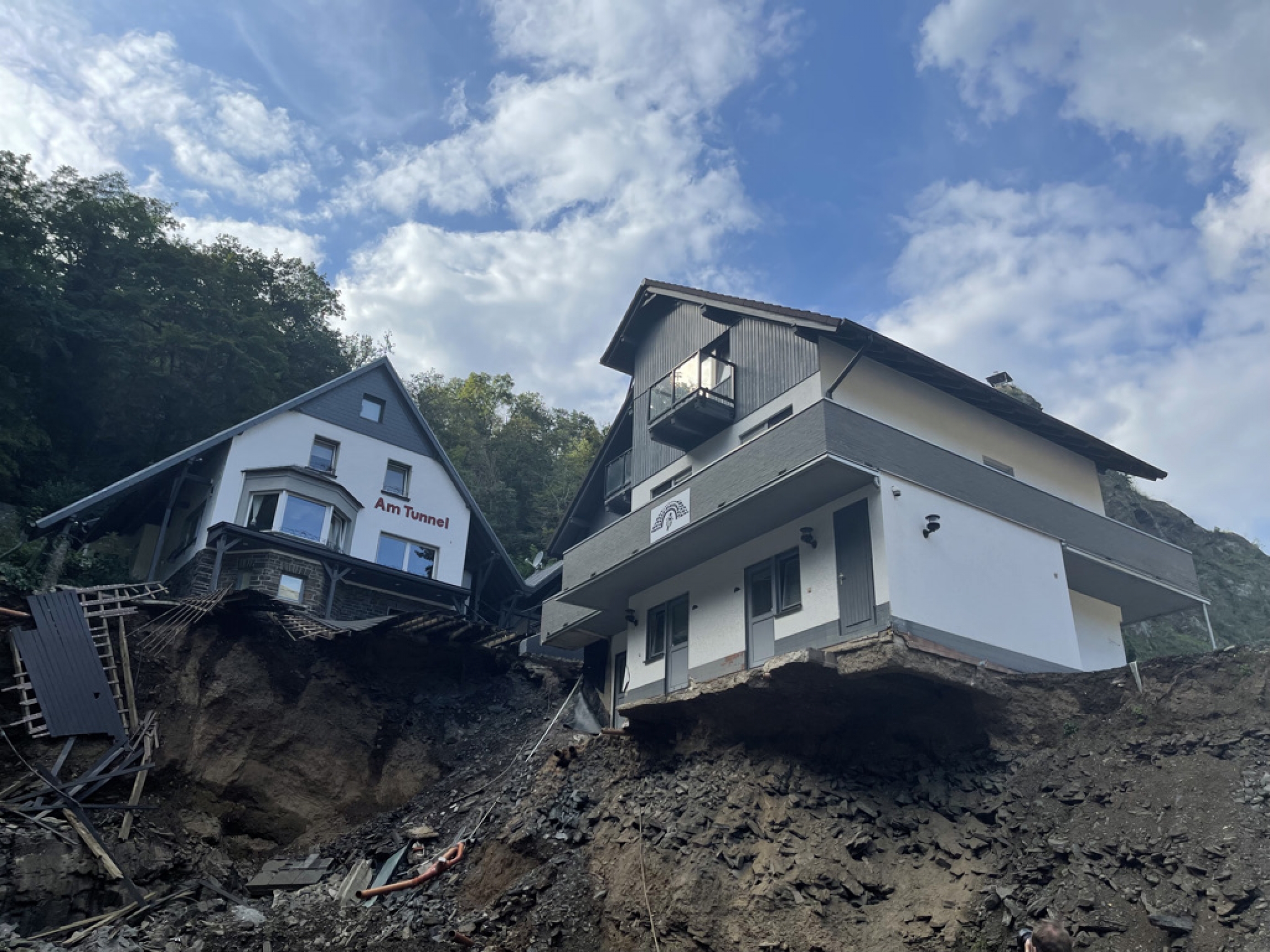 Homes in Altenahr, in western Germany, were uprooted by the record flooding in mid-July.

The first time, Stahl said, he stayed for a week. This is his sixth trip. He said he plans to make four or five more this year — to a town where, initially, he knew no one.

The scale of the work needed to restore these communities becomes painfully clear as you follow the river west.

Related: A massive security flaw exposed in Germany — then a criminal investigation

Then, you see the damage.

In Marienthal, a broken railway track is covered in debris: tires, a bike helmet, a teddy bear, a jar of cornflakes.

In Rech, a concrete bridge with the last third sheared off overlooks empty lots where homes simply washed away. 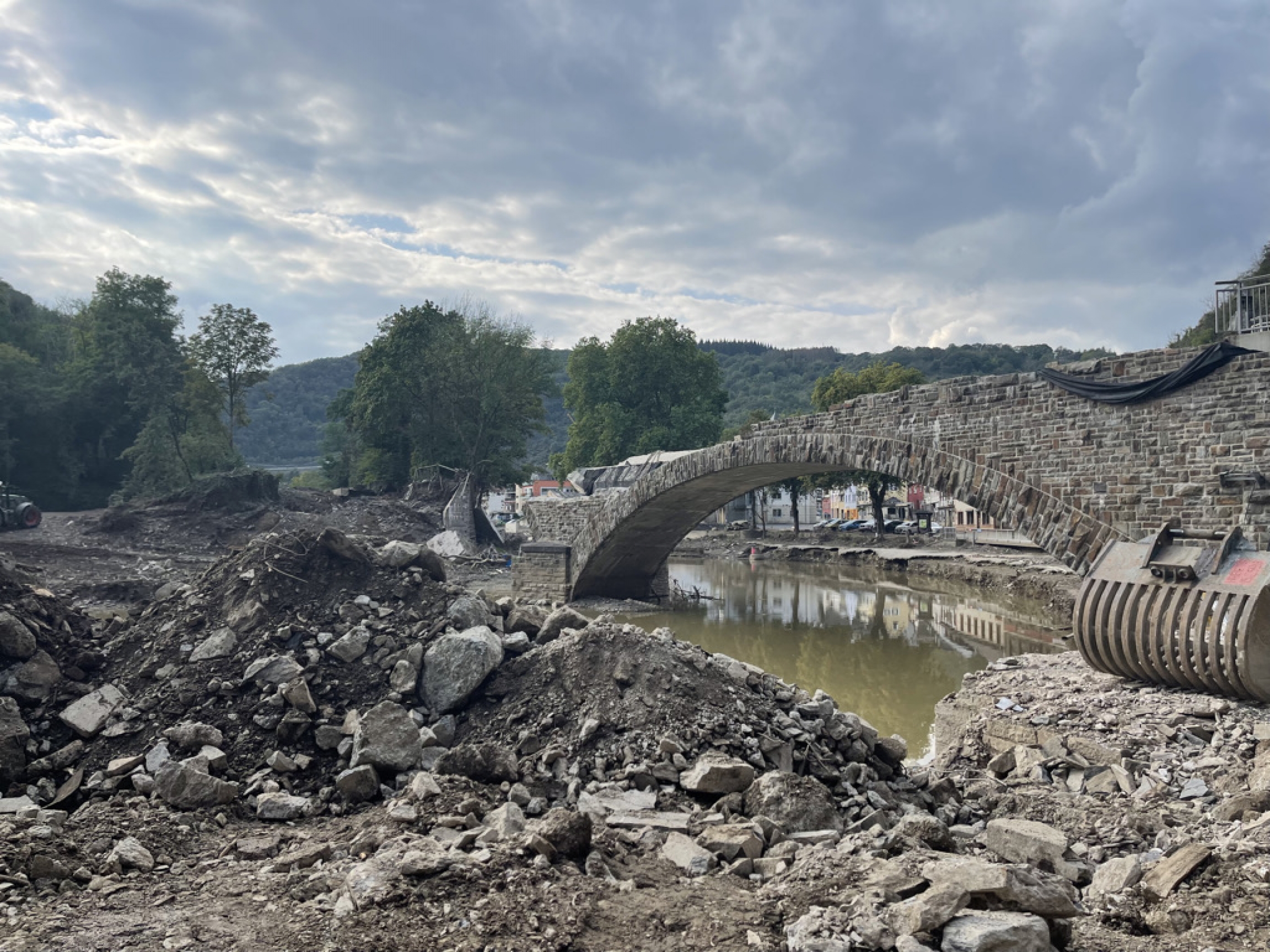 A bridge in Altenahr, in western Germany, is in ruins after the flooding.

In Laach, another railway track careens into the river like a rollercoaster, the connecting track on the bank about 100 yards away. 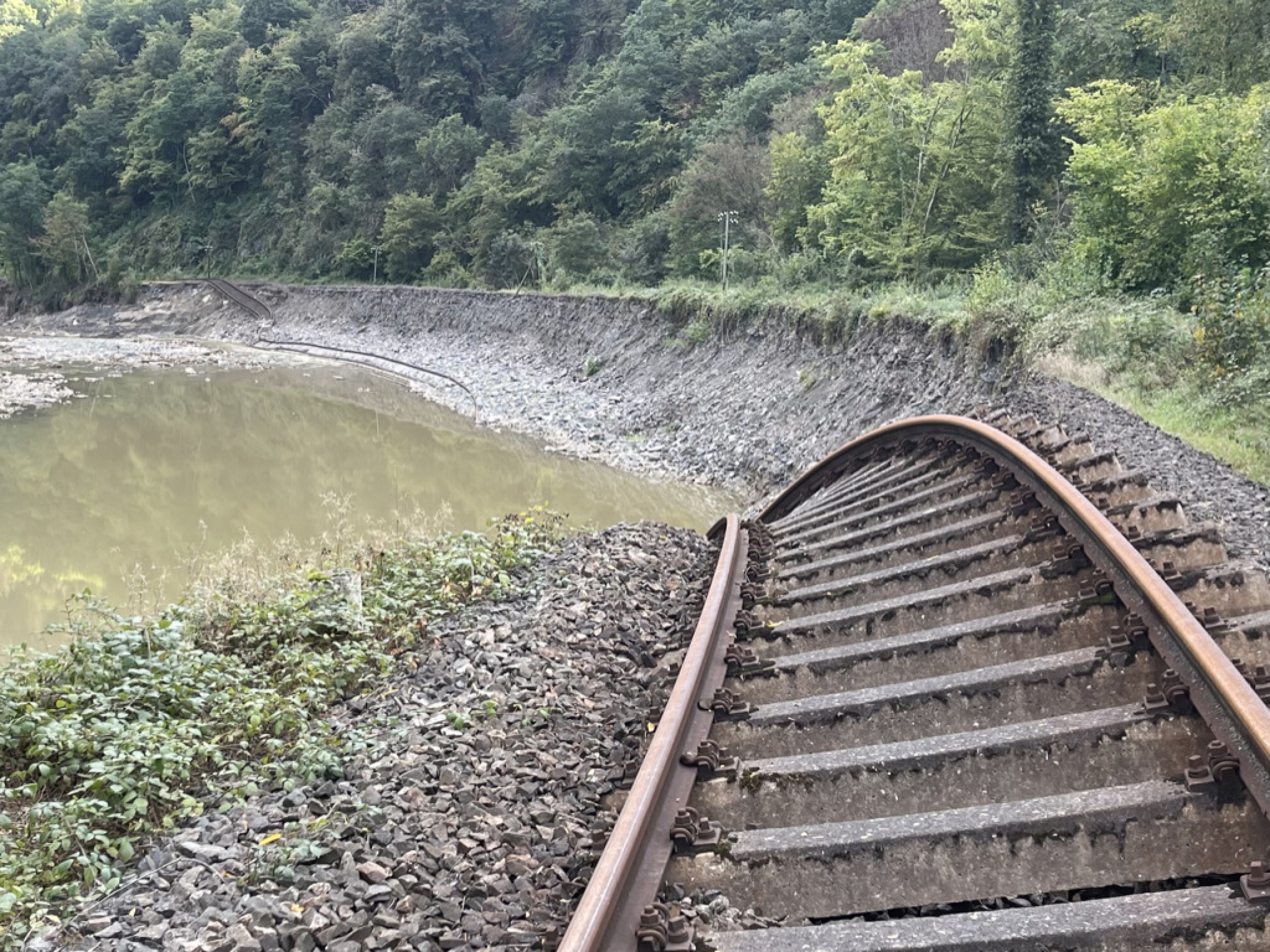 A railway damaged by the flooding in Laach, in western Germany, careens into the water.

Helfer Shuttle sends hundreds, sometimes thousands, of people into these communities every morning to assist residents. The grassroots volunteer group, which operates on donations from individuals and businesses, has set up its base in nearby Grafschaft.

There is a doctor’s tent, a canteen, a barbershop, even a forge for sharpening tools. It is like a little town, supported entirely by volunteers. 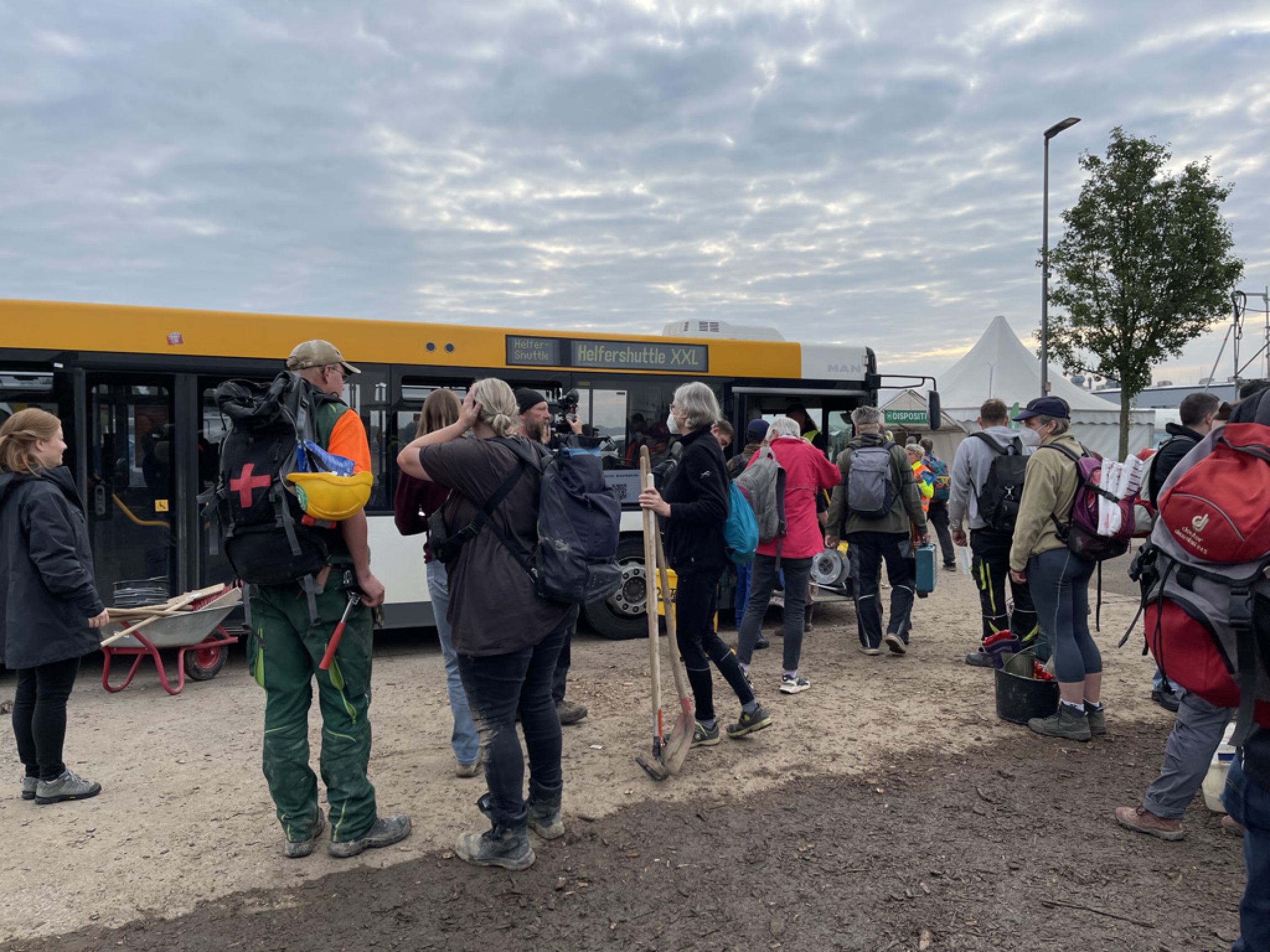 Helfer Shuttle sends hundreds, sometimes thousands of people every morning to assist residents in the communities impacted by the flooding in western Germany in July.

After the flood hit, he and his wife discussed how they could help local residents. They took the money they would have donated and rented the van that Prengel uses to transport volunteers in and out of the valley. He calls the work an “addiction,” one that he recognizes in others as well.

“When they just return out of the valley from work, they are dusty, they are sweaty, they stink — but they are so happy. And this is just a great feeling, to see the solidarity.”

“When they just return out of the valley from work, they are dusty, they are sweaty, they stink — but they are so happy,” Prengel said. “And this is just a great feeling, to see the solidarity.”

“When everybody is safe and sound, and you have to start the work, those structures are not prepared to do some plaster work in the houses, or to shovel mud into buckets,” Gehring said.

Related: A new documentary tracks the latest rise in far-right, neo-Nazism in Germany

They stress more help is needed; Helfer Shuttle would like a few hundred more volunteers on weekdays, especially as colder temperatures approach and more specialized labor is needed to help repair residents’ homes.

‘We are not alone’

Elke Schutzke, sitting with her fellow volunteers on the patio of a Rech winery, reflected on her first day with Helfer Shuttle.

She helped winemaker Otger Schell harvest grapes, work that she said gave her a sense of satisfaction but also a firsthand look at the enormity of the struggles people here face.

“We go home after that,” Schutzke said. “I have a warm shower at home.”

Schell’s family saw a quarter of their grapes and barrels of wine destroyed in the flood, along with 40,000 bottles of wine. 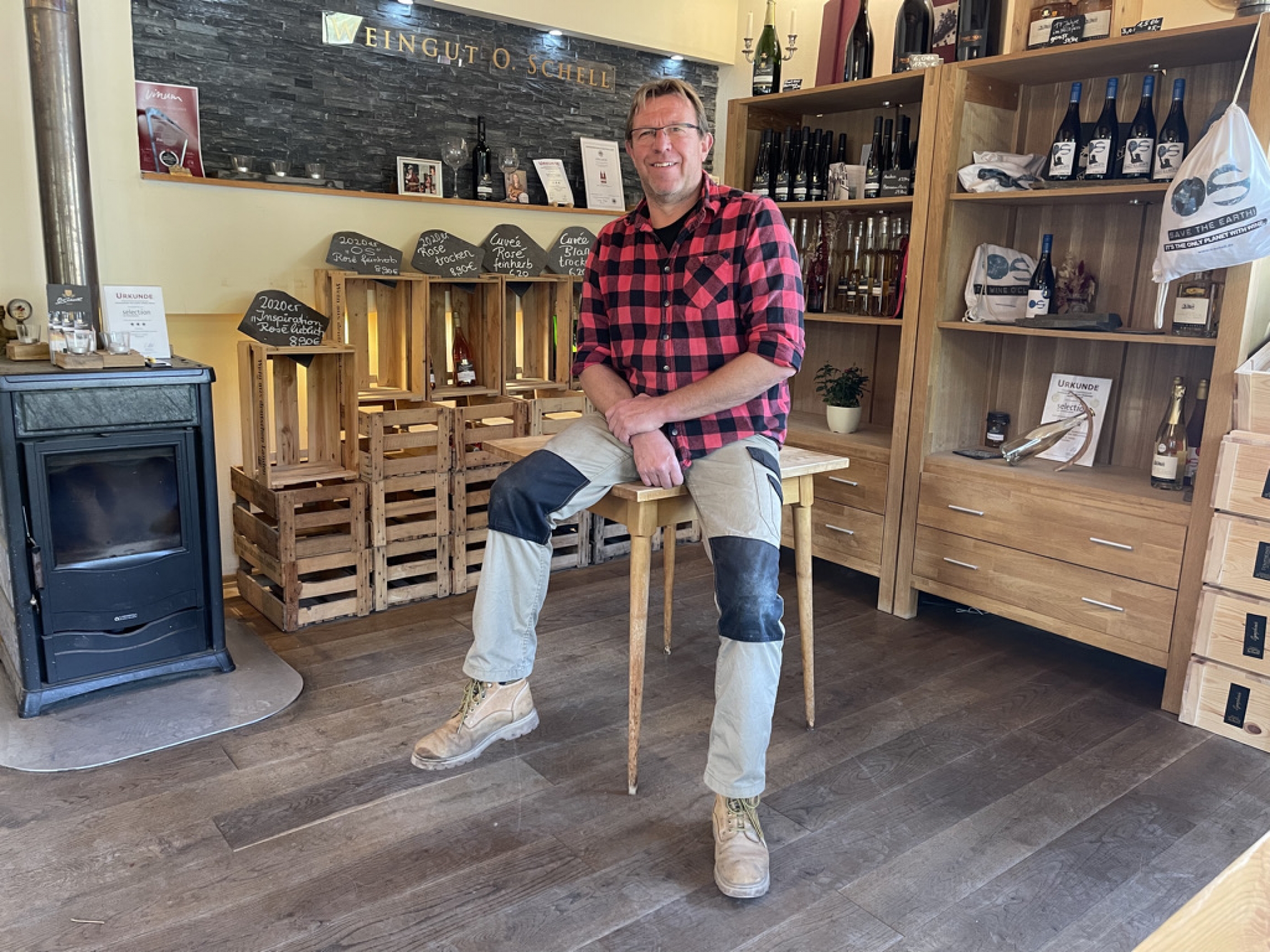 Otger Schell’s family in western Germany saw a quarter of their grapes and barrels of wine destroyed in the flood, along with 40,000 bottles of wine.

Government relief is supposed to cover some of that cost, Schell said.

But he said that help is slow in coming, unlike the people — just that morning, strangers — who spent the day in what remains of his vineyard.

“These people are real,” he said. “They stay here, they give you a hand and they start to help.”

He said the volunteers continue to give much more than manual labor.

“That was so, so important for us to see that we are not alone,” he said.

When asked if he plans to always stay here, on the land where his family has harvested grapes for a century, Schell doesn’t hesitate.