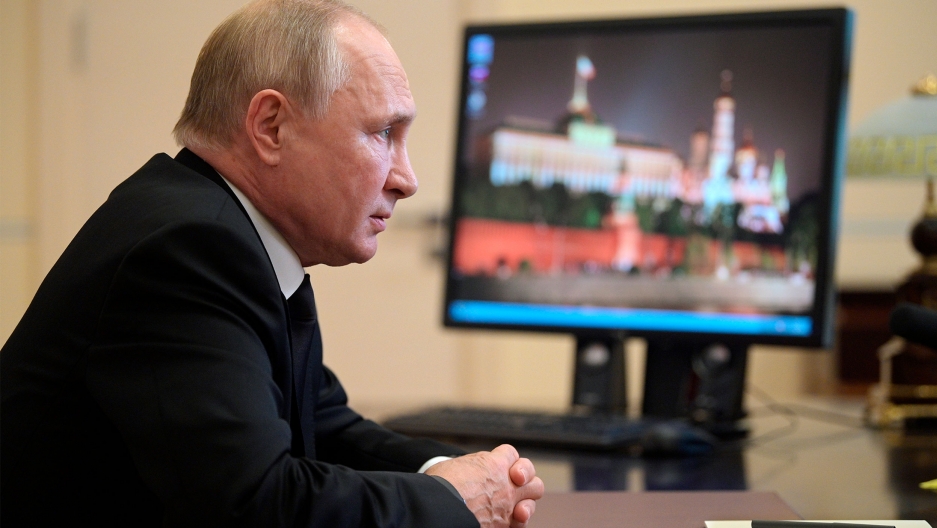 Russia’s ruling party retained its supermajority in parliament, further cementing President Vladimir Putin’s grip on power, following elections that excluded most opposition politicians and that were marred by multiple reports of violations.

The vote was watched closely for signs that Putin's control might slip, however slightly, ahead of the 2024 presidential election. It's not yet clear whether he will run again, choose a successor or outline a different path — but he is expected to keep his hand on the tiller, whatever he decides, and an obedient State Duma, or parliament, will be crucial to those plans.

Results released Monday from nearly 99% of the country’s polling stations gave the ruling United Russia party 49.8% of the vote for the 225 seats apportioned by parties, according to the Central Election Commission. Another 225 lawmakers are chosen directly by voters, and the results showed United Russia candidates leading in 198 of those races.

Ella Pamfilova, the head of the commission, confirmed that United Russia has retained the so-called constitutional majority in the parliament, or at least two-thirds of the 450 seats required for a party to make changes to the country's constitution.

In fact, the results indicated there would be almost no opposition voices in the Duma at all, with three other parties that usually toe the Kremlin line set to take many of the remaining seats, along with the New People party, which was formed last year and is regarded by many as a Kremlin-sponsored project.

According to Pamfilova, candidates from three other parties each won a seat, so in all eight political parties will be represented in the Duma. Voter turnout stood at 51%, she said.

The Communist Party received 19% of the party-list vote, a sizable improvement from the 13% it got in the 2016 election. United Russia got about 54% five years ago, so the results indicate some falloff in support.

But concerns that the results had been manipulated mounted on Monday, with many decrying that a breakdown of the online voting in Moscow was still not available to the public. The results in the other six regions that were allowed to vote online have been detailed. In Moscow, approval of the ruling party has always been particularly low and protest voting has been widespread. Candidates from the Communist Party called for demonstrations later in the day.

Fraud allegations aside, the Kremlin sweep was widely expected, since few opposition candidates were even allowed to run this year after Russian authorities unleashed a sweeping crackdown on Kremlin critics.

Organizations linked to imprisoned opposition leader Alexei Navalny have been declared extremist, and anyone associated with them was barred from seeking public office by a new law. Navalny is serving a two-and-a-half-year prison sentence for violating parole over a previous conviction that he says is politically motivated.

Other prominent opposition politicians faced prosecution or were forced to leave the country under pressure from the authorities.

Navalny's team hoped to make dents in United Russia's dominance with its Smart Voting strategy, which promoted candidates who had the best chance at defeating those backed by the Kremlin. However, authorities undertook a massive effort to suppress the strategy in recent weeks.

The government blocked the Smart Voting website and pressured Apple and Google to remove an app featuring it from their Russian online stores — a move the tech giants took as voting began Friday. Google also denied access to two documents on its online service Google Docs that listed candidates endorsed by Smart Voting, and YouTube blocked similar videos. In addition, the founder of the Russian messaging app Telegram, Pavel Durov, on Saturday disabled a Smart Voting chatbot set up by allies of Navalny.

Durov said he wanted to respect the laws prohibiting campaigning on voting days, but critics quickly pointed out that they didn't disable similar chatbots imitating Smart Voting and didn't remove the Moscow mayor's call to vote for United Russia candidates.

Apple and Google did not respond to a request for comment by the Associated Press. However, a person with direct knowledge of the matter who spoke on condition of anonymity because of the sensitivity of the issue, said that Google was forced to remove the app because it faced legal demands by regulators and threats of criminal prosecution in Russia.

Voting was marred by numerous reports of violations, including ballot-stuffing. Some videos on social media showed people trying to stuff thick piles of ballots into boxes, with only flimsy attempts at blocking the view of surveillance cameras by raising mops or pieces of cardboard. Brawls with election monitors were also caught on camera.

Some Kremlin critics said there were as many violations as in the 2011 parliamentary election, when reports of mass fraud triggered months of anti-government and anti-Putin protests. Pamfilova maintained, however, that there were fewer violations this year than before. She said 25,830 ballots in 35 regions were invalidated.

Putin’s spokesman Dmitry Peskov said the Kremlin views the election “quite positively” in terms of its “competitiveness, transparency and fairness."

Putin himself thanked Russians “for the trust” and for “a proactive approach to life," referring to the turnout, which was higher than in 2011.

Voting was extended to three days because of COVID-19, and in seven of Russia's 80-plus regions, voters were offered the option of casting ballots online. Officials said the measures were taken to reduce crowding at the polls during the pandemic, but election monitors said this created more room for manipulating the results.

There were particular concerns in Moscow, where nearly 2 million votes were cast online, and the results of some races changed dramatically at the last minute Monday.

Others questioned why the results of Moscow's online voting hadn't been broken out as they had been for other areas.

“As far as I understand, data from offline polling stations shows that candidates (endorsed by) Smart Voting won in 12 (single-constituency) districts out of 15, and in St. Petersburg — in seven out of eight,” Navalny said in a social media post relayed through his lawyers from prison.

“So the robot thought about it, lit a cigarette and decided to slow down the publication until the clever little hands of United Russia faked the results into completely opposite ones,” he said.

Valery Rashkin, a senior member of the Communist Party who ran for reelection, urged supporters to gather at Pushkin Square in the center of Moscow on Monday evening to “discuss” election results and protest the reported violations. “Come out with us to fight for our rights!” wrote Rashkin, who was backed by Smart Voting and initially led his race but lost to a United Russia opponent.

Russian news site Ura.ru released a video showing the square already was fenced off and surrounded by police vans.

Independent political analyst Masha Lipman said anecdotal evidence of violations suggests the vote may have been even more problematic than in 2011, but she believes a wave of protests as large as 10 years ago is unlikely.

“There is a huge difference in the public mood between back in 2011 when people took to the streets (and now)," Lipman said.

“Between back 2011-2012 and now, the government has hardened its policy quite dramatically," she said. “The last time we had mass street protests earlier this year, they were very brutally suppressed, and it seems that this policy of brutal suppression and intimidation has worked.”

By Daria Litvinova, Associated Press, with contributions from Anna Frants in Moscow and Kelvin Chan in London.