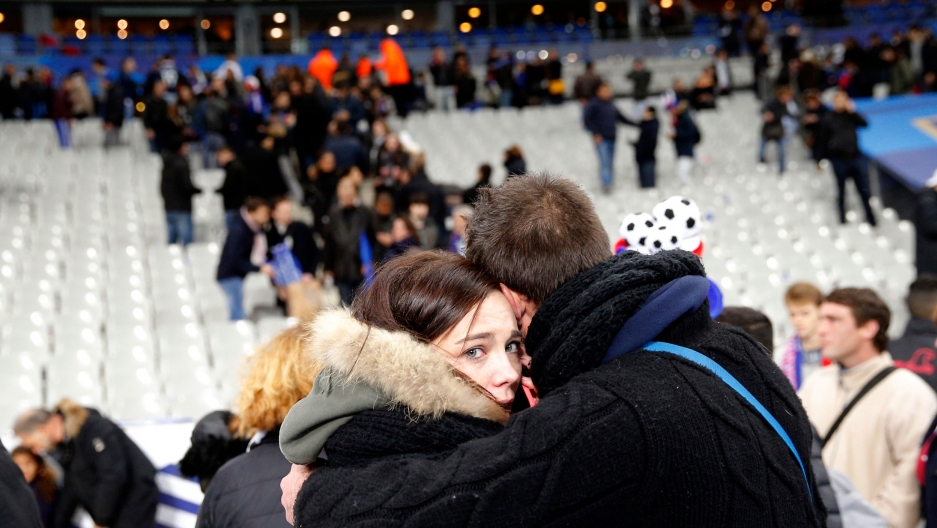 Two people comfort each other at the end of the international friendly soccer match between France and Germany in Saint Denis, outside Paris, after 9 gunmen and suicide bombers struck within minutes of each other at the national soccer stadium, the Bataclan concert hall and restaurants and cafes.

In the 20 years since the Sept. 11, 2001 terrorist attacks in the United States, a mixture of homegrown extremists, geography and weaknesses in counterterrorism strategies have combined to turn Europe into a prime target for extremists bent on hurting the West.

Europe watched open-mouthed as the 9/11 attacks unfolded across the Atlantic. Life on the Old Continent, too, would be transformed by those events, with hundreds of people killed and thousands injured at the hands of Islamic extremists in the following years.

Since 9/11, Europe has witnessed many more terrorist attacks on its soil than the United States. Why? A variety of reasons, analysts say.

Over the past decade or so, "what we've seen in Western Europe is an unprecedented jihadist mobilization," says Fernando Reinares, director of the program on Violent Radicalization and Global Terrorism at the Elcano Royal Institute in Madrid.

Evidence of that, he says, is not only the bombings, vehicle rammings and stabbings that have tormented Western Europe in recent times, but also the tens of thousands of European Muslims who felt compelled to join insurgent terrorist groups during recent wars in Syria and Iraq.

Related: NYU chaplain calls for a 'true pursuit of empathy' to heal from 9/11 aftermath

Western Europe has struggled to integrate significant Muslim populations into mainstream society. Many Muslims are disadvantaged and feel disenfranchised, and some harbor grievances against the countries where they live.

"There is a sense of alienation and a sense of frustration (that) jihadists are often latching onto," says Peter Neumann, a professor of Security Studies at King's College London.

"That's not the same in the United States," says Neumann, the principal adviser on security policy for candidate Armin Laschet in the current German election campaign. "American Muslims are much less hostile toward their own country than European Muslims, and they're much better integrated."

And in recent years, amid the growing influence of ISIS propaganda and promises, the soldiers returning from Syria and Iraq have felt inspired to target their home countries in Europe, sowing alarm among European governments.

As it turned out, 2001 was a watershed year for terror activity in the United States and Europe. At the turn of the century, the United States "was the big prize for al-Qaida, not Europe," says Olivier Guitta, managing director of GlobalStrat, an international security and risk consultancy firm in London.

But once the United States toughened its security after 9/11, he says, al-Qaida went hunting for easier targets. In Europe, it took an opportunistic approach, recruiting networks of supporters in Muslim communities to stage spectacular attacks.

Later, ISIS became the chief menace. It claimed responsibility for a string of notorious attacks, including one in Paris in 2015 that killed 130 people and wounded hundreds of others — France's deadliest violence since World War II. In 2016, nail bombs went off in Brussels, killing 32 people as well as the three perpetrators and injuring more than 300 people. Later the same year, a truck drove into crowds in Nice, France, killing 86 people and injuring 434.

Some critics have blamed that violence on weak links in the continent's defense. Intelligence capabilities differ widely among the European Union's 27 member countries.

Daniel Benjamin, formerly the senior counterterrorism adviser to Secretary of State Hillary Clinton and now president of the American Academy in Berlin, says that problem is hard to avoid in such a patchwork of countries of varying size and wealth.

"Inevitably," he says, "there are going to be stronger and weaker law enforcement and intelligence communities among such a varied a set of countries as you find in Europe, especially ones with such varied resources."

Even so, Guitta of GlobalStrat says that counterterrorism cooperation among EU countries has improved considerably since the 2015 Paris attacks.

That may prove precious in coming times. Reinares, of Spain's Elcano Royal Institute, predicts that al-Qaida and ISIS, rivalling for prominence, "will compete to stage large attacks in the West." And Europe must be on guard because it is an easier target than North America or Australia, he told an online conference Thursday.

The continent, Reinares says, lies closer to extremist's bases and is more permeable, whether internally through the absence of border checks across 26 countries or through migrant routes used by tens of thousands of people each year.