Muhammed Fouad, a cattle rancher, was just two years into a venture to bring affordable milk to his hometown in Iraq’s Anbar province, when — seemingly overnight — the cows started dying.

“We brought in veterinarians from Erbil, because [the cows] were OK and suddenly dying the next day."

“We brought in veterinarians from Erbil, because they were OK and suddenly dying the next day,” Fouad said in a phone call, through a translator.

The initiative left him with $350,000 in damages. Fouad had to lay off his employees and sell his home to pay his debts to the project’s investors. He now works in construction in the city of Hit.

Unprecedented drought — driven by climate change and exacerbated by upstream irrigation — is wreaking havoc on some of the world’s oldest river-fed farmlands in Iraq and Syria.

A dry winter has pushed water levels on the Tigris and Euphrates to record lows, disrupting hydroelectric power facilities and concentrating pollution in the river to undrinkable levels. Aid groups estimate that 12 million people are affected, in a crisis they warn could tip the balance of the food system and livelihoods for the entire region.

Related: Climate change is driving the worst drought Madagascar has seen in 4 decades 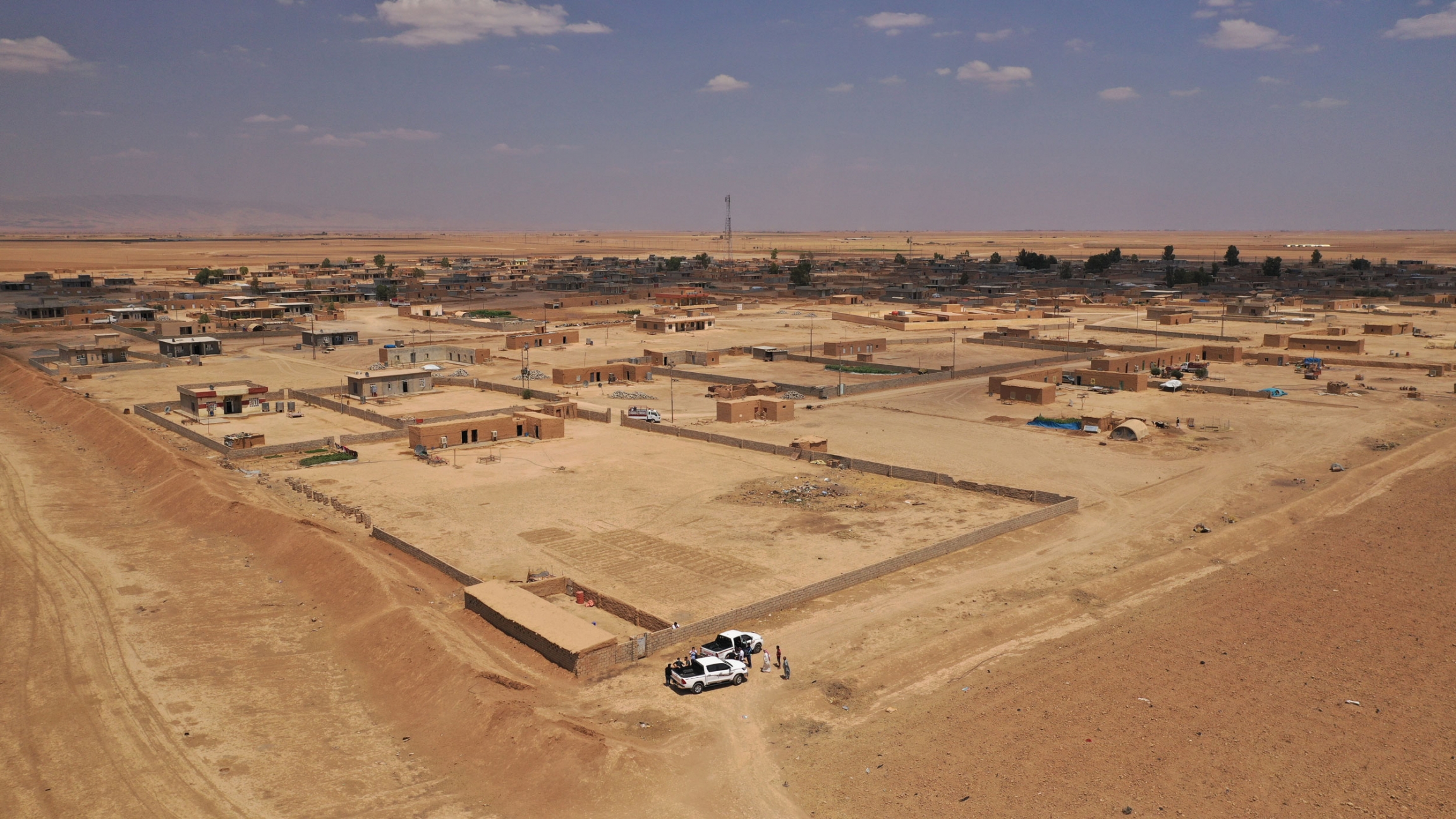 Al-guran village, Baaj, Iraq, August 2021. More than 12 million people in Syria and Iraq are losing access to water, food and electricity and urgent action is needed to combat a severe water crisis.

In Syria, the drought is the worst in 70 years — a crisis even more severe than the 2006-2009 drought that occurred in the years before the Syrian Civil War, a coalition of aid groups warned in August.

In Iraq, they said this summer was the second-driest season in 40 years.

Samah Hadid, the head of Middle East advocacy for the Norwegian Refugee Council, temporarily moved her office near to the heart of the drought, in the Iraqi city of Erbil, where she spends her days interviewing farmers and families affected by the lack of water.

“You know, we hear stories, people are desperate. ... They’re spending so much money on drinking water and now they just plan to leave these areas and desert these areas because they just can’t live on these lands anymore.”

“You know, we hear stories, people are desperate,” Hadid said. “They’re spending so much money on drinking water and now they just plan to leave these areas and desert these areas because they just can’t live on these lands anymore.”

Families in Iraq regularly spend up to $80 a month to purchase potable drinking water, the NRC discovered in its field research. Two hydroelectric dams in northern Syria are facing closure due to low river levels, and outbreaks of water-borne illnesses are hitting camps for internally displaced people. 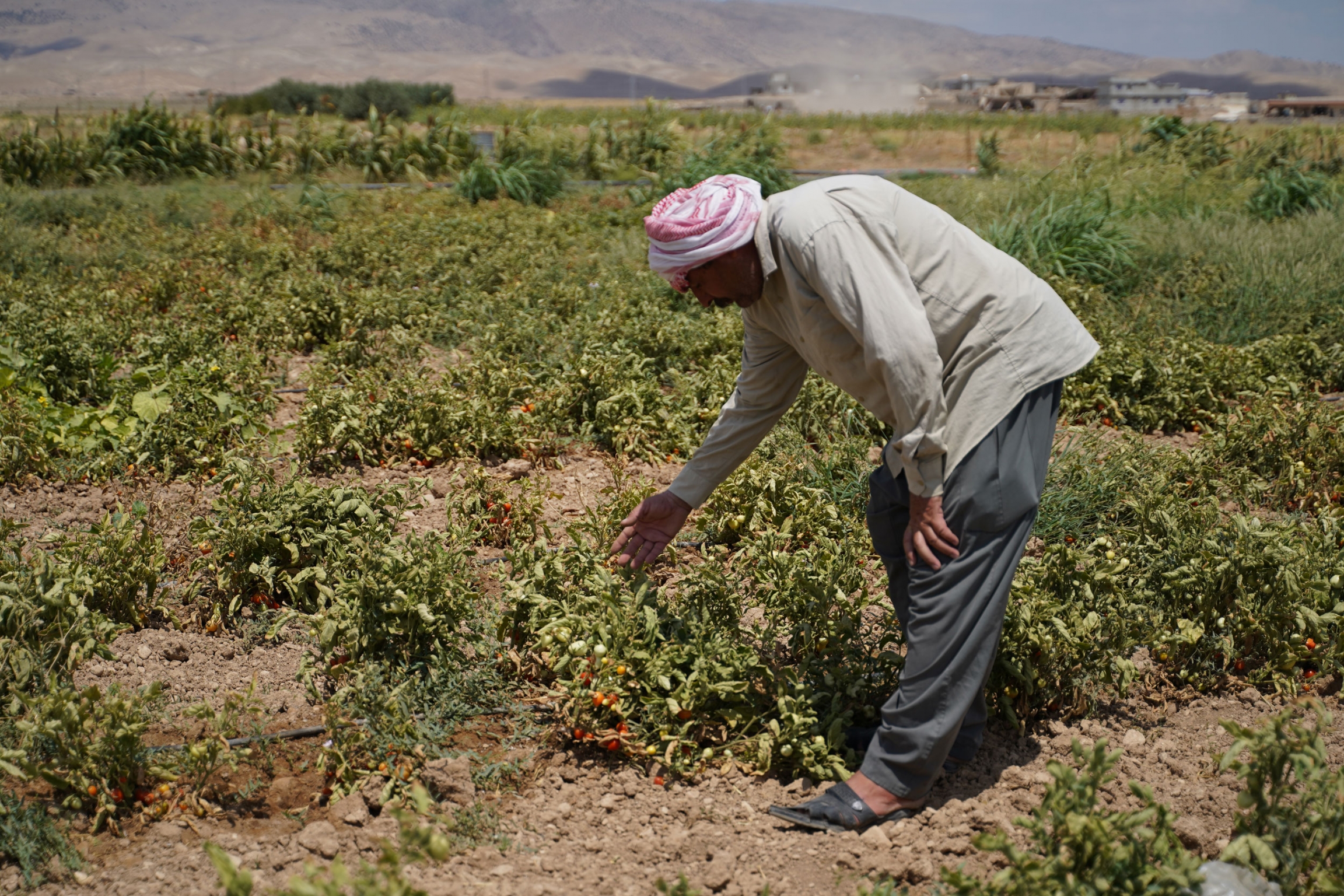 Haji Hassa at his farm, showing how the drought is impacting the farm and plants, Kuri Jami village, Sinjar, August 2021.

Water as a weapon

The blame has quickly shifted upstream to Turkey, which maintains a series of dams on the headwaters of the Tigris and Euphrates rivers before they flow back to Syria and Iraq.

“Turkey itself is being hit by the climate crisis, and low rainfall. But it really is necessary that Turkey releases more water into those rivers because millions of [people] rely on those rivers."

“Turkey itself is being hit by the climate crisis, and low rainfall. But it really is necessary that Turkey releases more water into those rivers because millions of [people] rely on those rivers,” Hadid said. 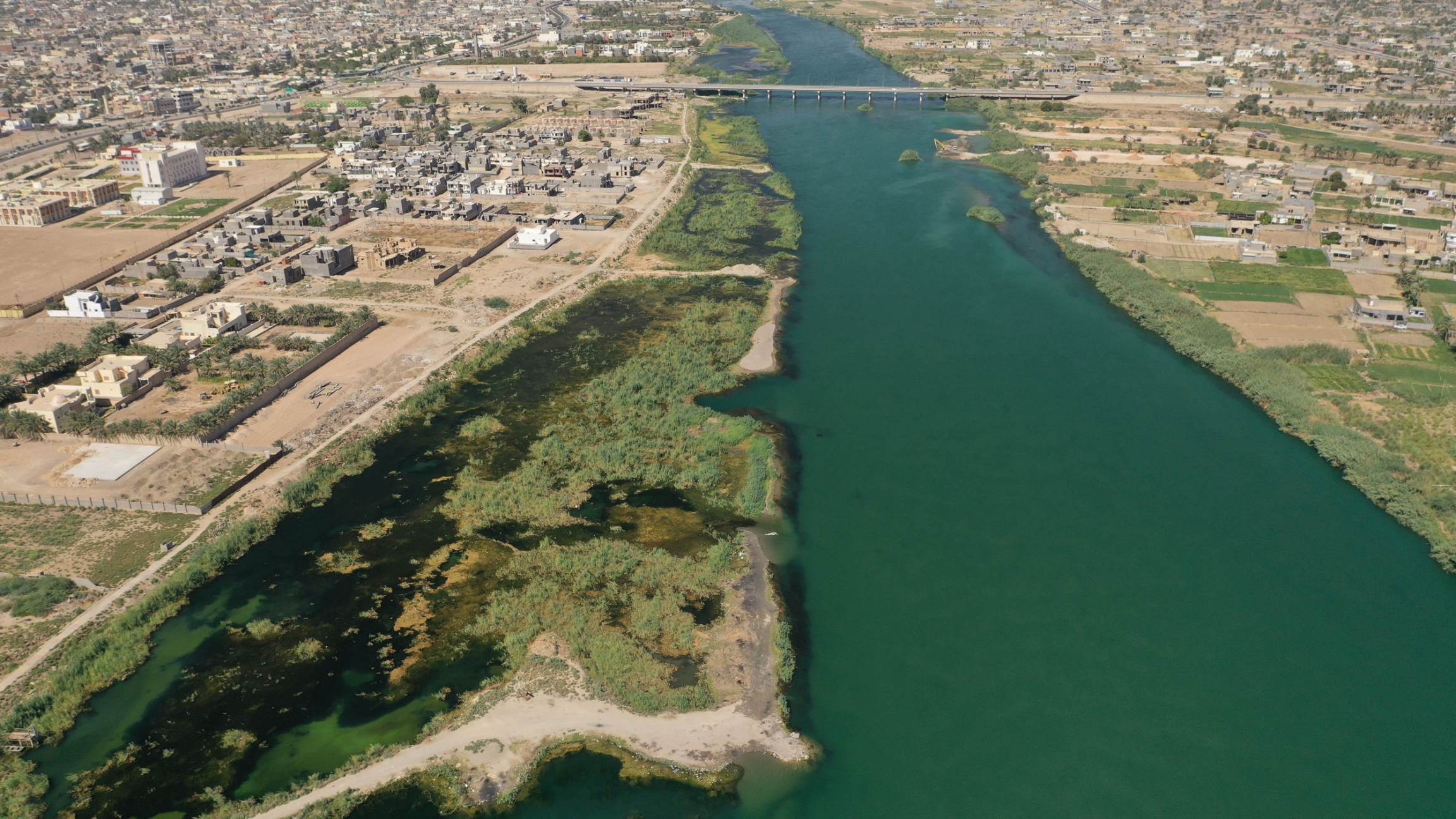 From Anbar, Iraq, an aerial view of the Euphrates river, August 2021.

In the Sinjar district of Iraq, Qassim Ali Aizdo said it’s become impossible to grow water-intense vegetables like eggplant, because there’s no humidity to help the seedlings grow. Even olive trees, a hardy, drought-tolerant crop, are shriveled and dry in the heat.

“The melon crops, they were ruined, even the roses, they had insects. And there were insects on the beans I’ve never seen in my life."

“The melon crops, they were ruined, even the roses, they had insects. And there were insects on the beans I’ve never seen in my life,” he said. 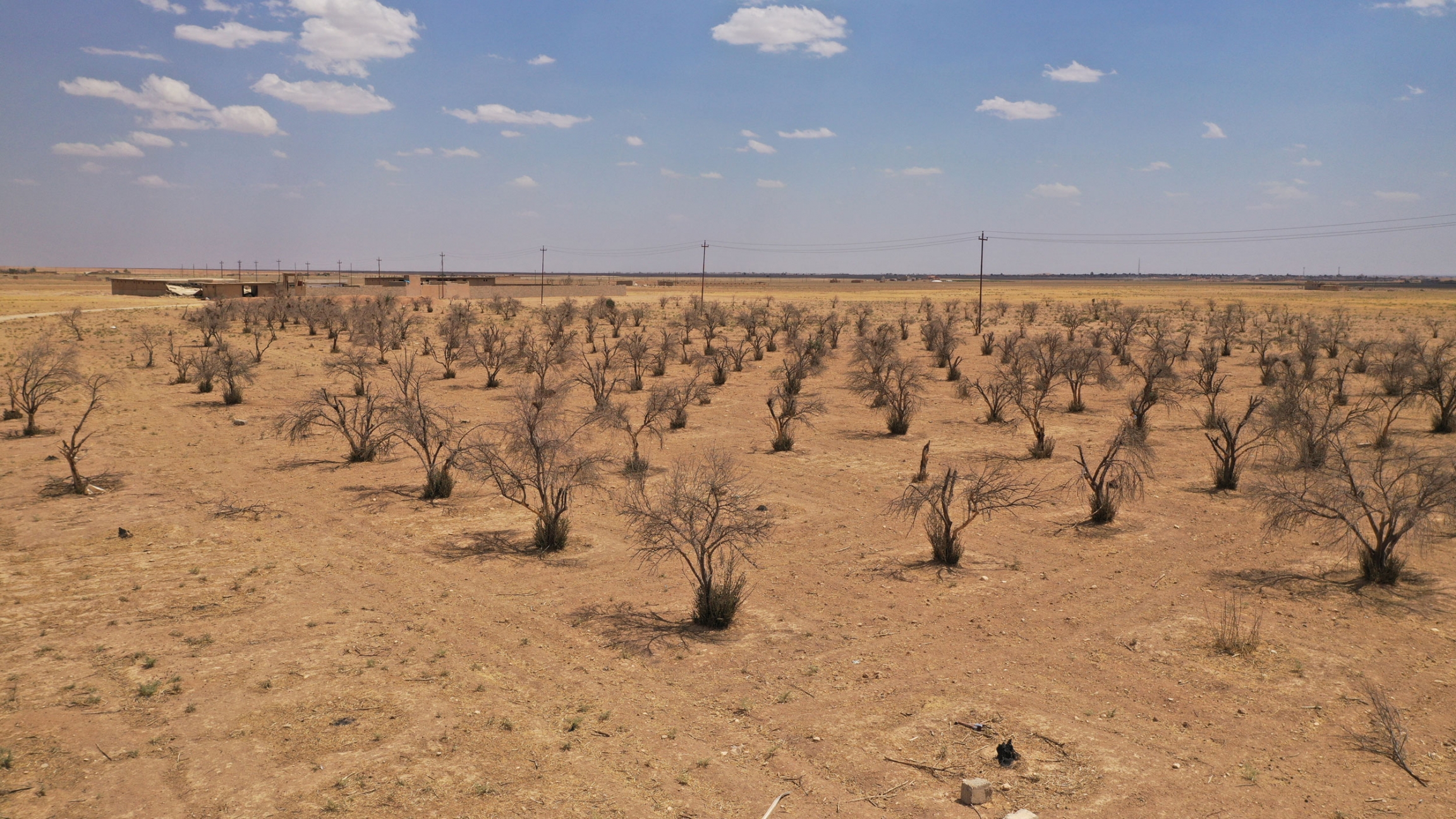 Turkish officials insist they are abiding by existing water-sharing agreements that require the country to release from its dams a minimum of 500 cubic meters of water per second.

The country has built more than 500 dams in the past two decades which, to the Turkish government, is a mark of prosperity and development in the arid southeast.

The largest dam on the Tigris river is the Ilisu Dam, whose reservoir covers the ancient Turkish town of Hasankeyf. In 2019, when Turkey began filling the Ilisu, downstream levels on the Tigris were significantly curbed, contributing to a crisis of water-related illnesses in the southern Iraqi city of Basra. 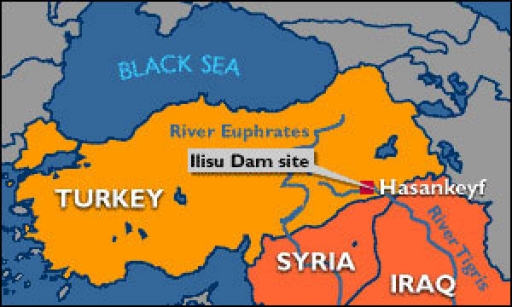 Map of rivers shared by Turkey, Syria and Iraq.

But some Kurdish authorities in Syria and Iraq are accusing Turkey of using water as a weapon within the larger context of ongoing regional conflict.

“Turkey is not using water as a weapon,” said Dursun Yildiz, president of the Ankara-based Hydropolitics Association. He said most of Turkey’s large dams are hydroelectric ones that do impact the environment — but don’t necessarily consume a lot of water. Water is lost through evaporation in dammed reservoirs more rapidly than in non-dammed rivers, however.

To Yildiz, the bigger issue is that there are few clear agreements between the countries about how the water is shared, and few efforts to make water systems more efficient.

Years ago, while working as a director for Turkey’s State Hydraulics Works, he said, he saw firsthand how efforts to establish clearer, more cohesive water-sharing rules between Turkey, Iraq and Syria were unsuccessful in the past. This region has always had water shortages, Yildiz said. And things are likely to get worse with rapid climate change.

“I’m not saying these things to blame the neighboring countries. What I’m saying right now, is we have no time to lose."

“I’m not saying these things to blame the neighboring countries. What I’m saying right now, is we have no time to lose,” Yildiz said. 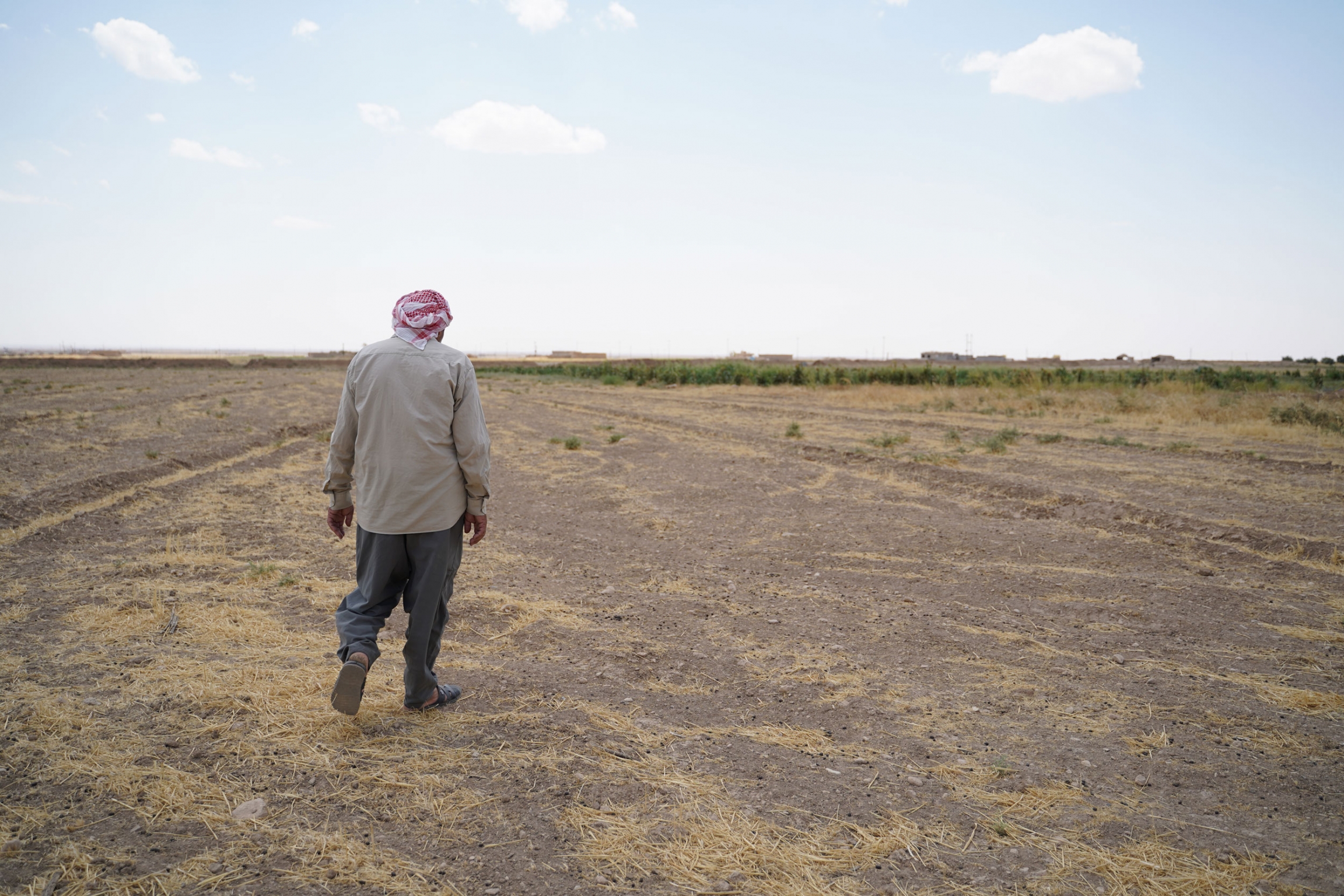 Even increased water flow or a new water-sharing agreement may come too late for many of Iraq’s farmers.

In Nineveh, Mohammed Ibrahim Hassan said whole swaths of his wheat and barley crops have failed. To adapt, he digs deeper wells, tapping into groundwater that likely won’t replenish itself for generations to come.

In the past, he said, the water levels below ground would drop about 3 feet a year. But now, it will drop 15 or 20 feet. Still, they keep digging — an investment few farmers can afford.

“I wish you could come and see it,” he said in a phone call. “Otherwise, you might think that I’m exaggerating.”