President Jair Bolsonaro rallied his base on Sept. 7, Brazil’s Independence Day, with large crowds of his supporters heading to the streets in yellow and green — the colors of the Brazilian flag.

Estimates say more than 100,000 people hit the streets in Brasília and Sao Paulo. The numbers are far short of what Bolsonaro was calling for — but it was still very big.

“This is a historic day for those who want freedom,” Bolsonaro’s former tourism minister Marcelo Antônio told a sympathetic YouTuber. “This is why we are here, for our fight to support President Bolsonaro.”

Related: Bolsonaro rallies his base with voter fraud claims ahead of elections

The demonstrations came as Bolsonaro has been slipping further in polls ahead of the 2022 elections, and after weeks of concerns that he might use the day to unleash an authoritarian Jan.-6-style uprising —which happened in the US — against the other branches of government.

Bolsonaro took advantage of the day of action to ramp up his rhetoric — but demonstrations were largely nonviolent.

Some groups of Bolsonaro supporters did knock down metal police barricades and try to force themselves onto the premises of government buildings, but military police pushed them back with tear gas.

“Run,” said a woman draped in a Brazilian flag in one video posted on Twitter. “Cowards,” she yelled at the police while running from the smoke.

Otherwise, however, the day’s protests were peaceful. 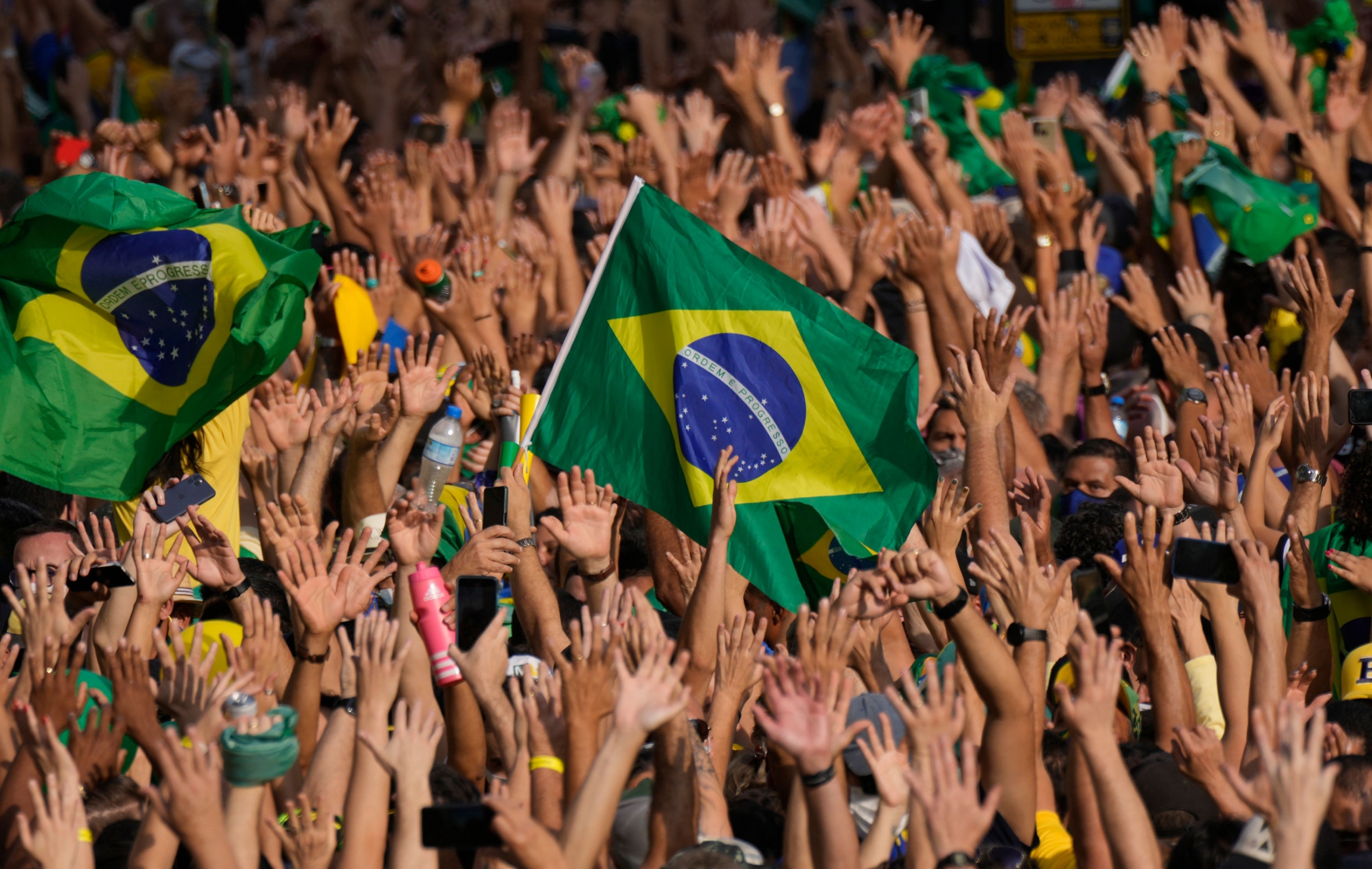 “The protest today was super calm ... But what happened was for about a 12-hour period, the news cycle was all about chaos in Brazil. So, that was the actual insurrection ..."

“The protest today was super calm,” said Brian Mier, an editor of the independent media site Brasil Wire and a journalist with teleSUR, who covered the rally in Brasília. “But what happened was, for about a 12-hour period, the news cycle was all about chaos in Brazil. So, that was the actual insurrection. The idea that they spread in the media. The idea that the people were on the verge of overthrowing the Brazilian institutions like the Supreme Court.”

Bolsonaro has battled the Supreme Court recently over investigations into his government involving electoral crimes and corruption, as well as inquiries into criminal fake news schemes that have jailed some top Bolsonaro allies.

“Sept. 7 was a trial run of the neofascist forces, led by Bolsonaro, to implement a totalitarian coup d’etat in Brazil in the near future."

“Sept. 7 was a trial run of the neofascist forces, led by Bolsonaro, to implement a totalitarian coup d’etat in Brazil in the near future,” said sociologist Carlos Eduardo Martins. He says a coup is still Bolsonaro’s end game. “Bolsonaro still doesn’t have the sufficient support for this. That’s why he is looking to grow his support, appealing to the reactionary masses that back him.”

That might seem extreme, but it’s clear that Bolsonaro took his rhetoric and attacks on the judicial branch to a whole new level yesterday.

In a speech to a sea of supporters in Brasília, Bolsonaro threatened to shut down the Supreme Court if it didn’t stop interfering with his government.

Signs in the crowd called for free speech, the closure of the Supreme Court and Congress and demands for military intervention and paper ballots to replace Brazil’s electronic voting system.

Bolsonaro flew to Sao Paulo in the afternoon, where he told supporters on Paulista Avenue that only God could remove him from power.

“There are only three options for me,” he said. “Jail, death or victory. And those scoundrels need to know that I will never be jailed,” he said.

“He, of course, went on [a] full-fledged attack, and unless the Supreme Court responds in some way, tomorrow or soon, it’s a pretty unpredictable situation."

“He, of course, went on [a] full-fledged attack and unless the Supreme Court responds in some way, tomorrow or soon, it’s a pretty unpredictable situation,” said Rafael Ioris, a professor of Latin American history at the University of Denver. 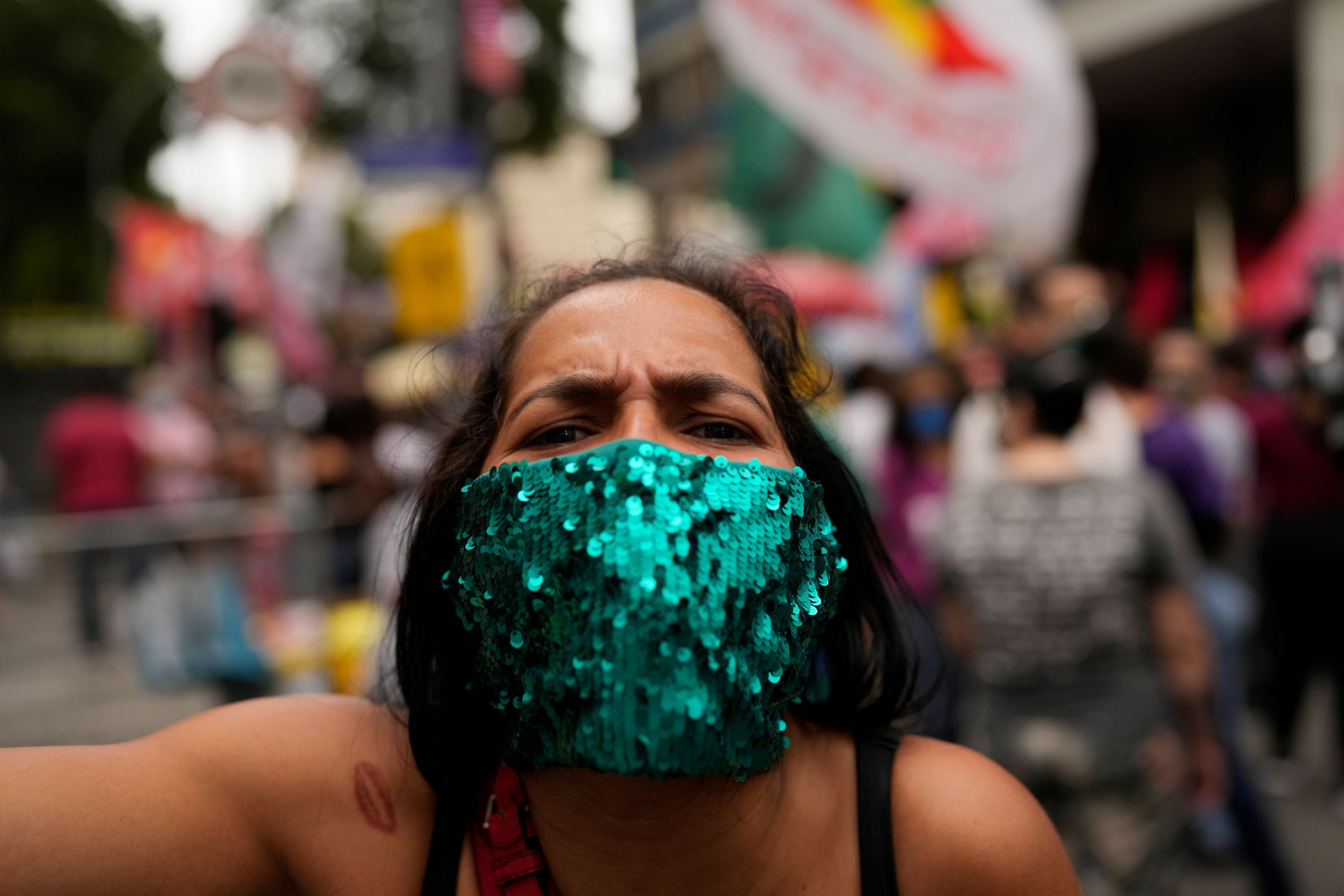 A woman attends a protest against Brazilian President Jair Bolsonaro's handling of the COVID-19 pandemic, the economy and corruption, on Independence Day in Rio de Janeiro, Brazil, Sept. 7, 2021.

Bolsonaro’s opponents also marched yesterday in cities across Brazil, demanding more vaccines and his removal from office. Although, these protests were smaller.

“Jair Bolsonaro actually has a base. Sept. 7 shows he can put more people on the streets than say [center-left candidate] Ciro Gomez,” Mier said. “But it’s smaller than the base behind [former president] Lula [da Silva] — a lot smaller.”

Lula leads all polls ahead of next year’s elections, with roughly 40% support.

Bolsonaro, for his part, has been deepening his ties with the US far-right and replicating Trump’s rhetoric and claims of voter fraud in Brazil. Close allies to Donald Trump and his former top strategist Steve Bannon were in Brazil in the days leading up to Sept. 7, for Brazil’s CPAC conference, which was held over the weekend.

All signs seem to point in the direction of a tumultuous year before the 2022 elections.

And it’s clear that even if Bolsonaro loses, he will not go quietly.

Several centrist parties in Congress said they would be discussing their position on Bolsonaro’s impeachment. More than 130 impeachment requests were delivered to Arthur Lira, the head of the Lower House and a Bolsonaro ally.

Lira has refused to proceed with the impeachment requests, but he criticized both the Supreme Court and Bolsonaro's coup threats on Wednesday.

“We have this eternal 15 months to go to get to an election result and he is absolutely explicit about not accepting defeat,” Ioris said.

“So, I think things are worse, more polarized. But if there’s any silver lining, everything is really out in the open," he added. "There is no way that anyone can say that he will respect the institutions. He will not.”