“Mamama,” “dadada,” “bababa” — parents usually welcome with enthusiasm the sounds of a baby’s babble. Babbling is the first milestone when learning to speak. All typically developing infants babble, no matter which language they’re learning.

Speech, the oral output of language, requires precise control over the lips, tongue and jaw to produce one of the basic speech subunits: the syllable, such as “ba,” “da,” “ma.” Babbling is characterized by universal features — for example, repetition of syllables and use of rhythm. It lets infants practice and playfully learn how to control their vocal apparatus to correctly produce the desired syllables.

More than anything else, language defines human nature. But its evolutionary origins have puzzled scientists for decades. Investigating the biological foundations of language across species — as I do in bats — is a promising way to gain insights into key features of human language.

I’m a behavioral biologist who has spent many months of 10-hour days sitting in front of bat colonies in Panama and Costa Rica, recording the animals’ vocalizations. My colleagues and I have found striking parallels between the babbling produced by these bat pups and that by human infants. Identifying a mammal that shares similar brain structure with human beings, and is also capable of vocal imitation, may help us understand the cognitive and neuromolecular foundations of vocal learning.

Vocal learning in other animals

Scientists learned a great deal about vocal imitation and vocal development by studying songbirds. They are among the best-known vocal learners, and the learning process of young male songbirds shows interesting parallels to human speech development. Young male songbirds also practice their notes in a practice phase reminiscent of human infant babbling.

However, songbirds and people possess different vocal apparatus — birds vocalize by using a syrinx, humans use a larynx — and their brain architecture differs. So, drawing direct conclusions from songbird research for humans is limited. 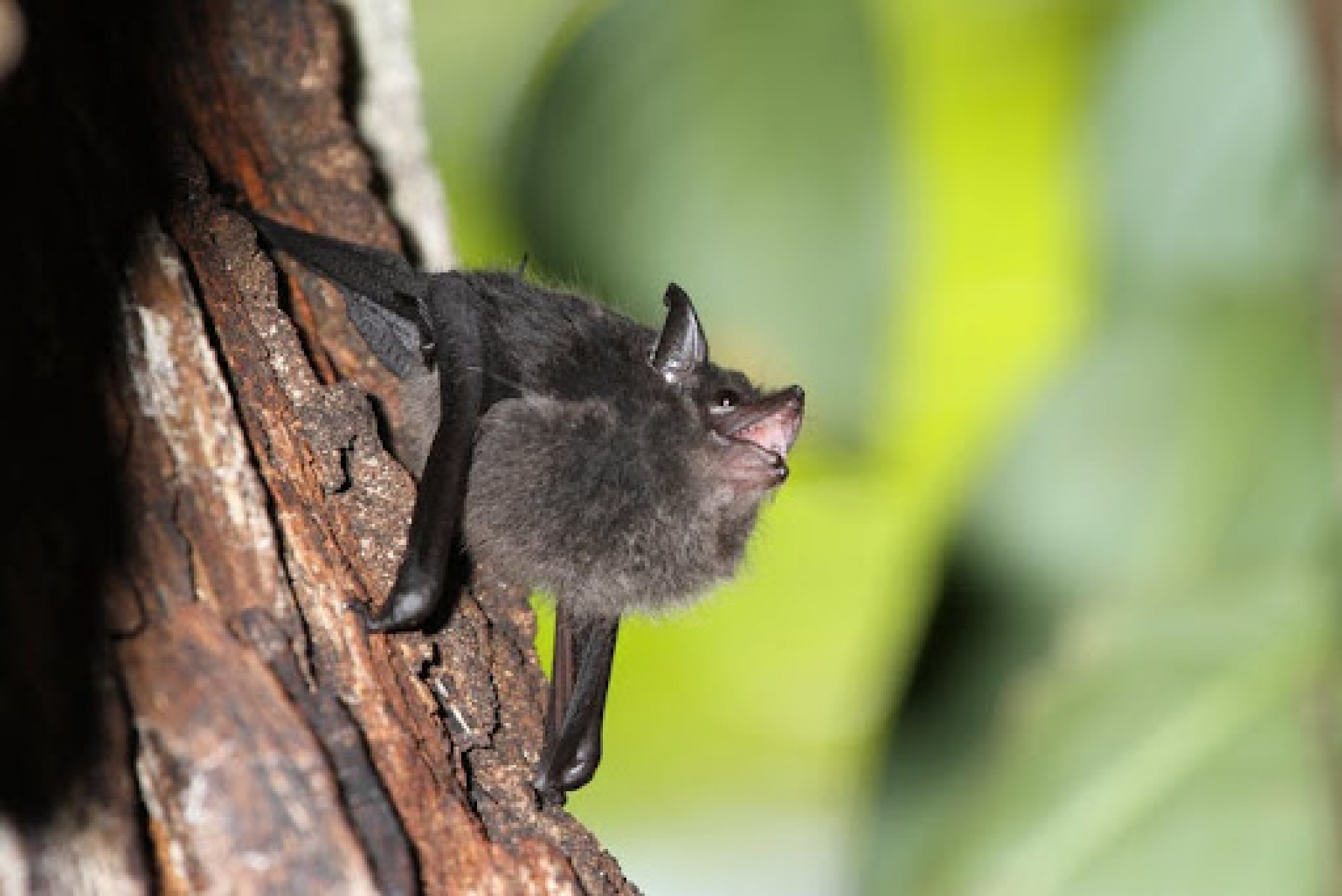 A greater sac-winged bat pup babbling in its day roost.

Luckily, in Central America’s tropical jungle, there’s a mammal that engages in a very conspicuous vocal practice behavior that is strongly reminiscent of human infant babbling: the neotropical greater sac-winged bat, Saccopteryx bilineata. The pups of this small bat, dark-furred with two prominent white wavy stripes on the back, engage in daily babbling behavior during large parts of their development.

Greater sac-winged bats possess a large vocal repertoire that includes 25 distinct syllable types. A syllable is the smallest acoustic unit, defined as a sound surrounded by silence. These adult bats create multisyllabic vocalizations and two song types. The territorial song warns potential rivals that owners are ready to defend their home turfs, while the courtship song lets female bats know about a male bat’s fitness as a potential mate.

The only other non-human mammal that scientists have documented babbling in is the pygmy marmoset, a small South American primate species that is not capable of vocal imitation. The greater sac-winged bat offered the first possibility to study pup babbling in detail in a species that can imitate the vocalizations of others. But just how similar is bat babbling to human infant babbling? 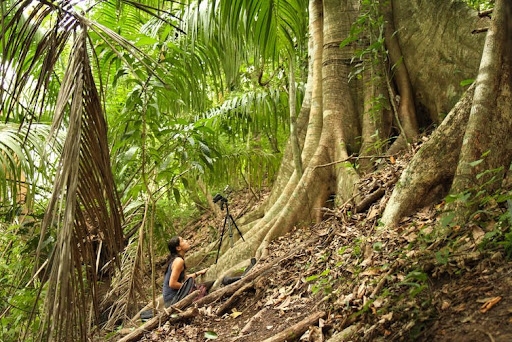 Fernandez spent long days in the field recording the vocalizations of greater sac-winged bat pups in their day roosts.

Hundreds of hours of bat babbling

To answer that question, I monitored the vocal development of wild pups in eight colonies. During the day, S. bilineata find shelter and protection in tree crevices and outer walls of buildings. They’re very light-tolerant, and adults like to stay several centimeters apart from one another, making it easier for us to observe and record particular individuals.

To be able to recognize specific bats, I marked their forearms with colored plastic bands. I followed 20 pups from birth until weaning. Starting around 2.5 weeks of age, and continuing until weaning around 10 weeks old, pups babble away between sunrise and sunset in the day roost. It’s very loud, audible even to the human ear, because some babbled syllables are within our hearing range (others are too high for us to hear). For each pup, I recorded babbling bouts — some of which lasted as long as 43 minutes — and the accompanying behaviors throughout their entire development. In contrast, adult bats produce vocalizations that last no more than a few minutes.

Scientists have known for a while that pups learn how to sing by vocally imitating adult tutors while babbling. But our new study provides the first formal analysis that their babbling really does share many of the features that characterize babbling in human infants: duplication of syllables, use of rhythm and an early onset of the babbling phase during development.

Just as human infants produce sounds that are recognizable as what are called canonical adult syllables — those with mature features that sound like what an adult speaker produces — bat pups’ babbling consists of syllable precursors that are part of the adult vocal repertoire.

Moreover, pup babbling is universal. Each pup, regardless of sex and regional origin, babbled during its development.

The pup (on the right, with darker fur) sits beside the mother bat and engages in babbling behavior in the day roost. Credit: Michael Stifter

Baby talk, from mom to pup

During my first field season, I noticed that during babble sequences, mothers and pups interacted behaviorally and vocally. Mothers produced a distinct call type directed at pups while babbling.

We, humans, alter our speech depending on whether we are addressing infants or adults. This infant-directed speech — also known as motherese — is a special form of social feedback for the vocalizing infant. It’s characterized by universal features, including higher pitch, slower tempo and exaggerated intonation contours. The timbre — the voice color — also changes when people speak “motherese” compared to when talking to other adults. Timbre is what makes a voice sound a bit cold and harsh or warm and cozy. Could it be that female bats also changed their timbre, depending on whom they directed their calls to?

The results were clear: For the first time, we’d found a non-human mammal that changes the color of voice depending on the addressee. Bats also use baby talk!

Our results introduce the greater sac-winged bat as a promising candidate for cross-species comparisons about the evolution of human language. Babbling is like a behavioral readout of the ongoing vocal learning happening in the brain. When pups babble, they imitate the adult song — and provide us with insight about when learning is taking place. It offers the unique possibility to study the genes that are involved in vocal imitation.

And since bats share their basic brain architecture with people, we can translate our research findings from bats to humans. I’m fascinated that two mammal species that are so different, share striking parallels in how they reach the same goal: to acquire a complex adult vocal repertoire — namely, language.

Ahana Aurora Fernandez is a postdoctoral researcher in behavioral ecology and bioacoustics at the Museum für Naturkunde, Berlin. This article is republished from The Conversation under a Creative Commons license. Read the original article.