It was snowing when Rumbila Abdullahi first arrived at her new home in Springfield, Massachusetts in 2005. She was 7 years old.

“What was that terrifying white stuff falling from the sky?” she recalled.

Abdullahi is a Somali Bantu, an ethnic group of marginalized tribes that were persecuted during the Somali Civil war in the early 1990s. Her parents walked from Somalia to Kenya to escape the violence, ultimately spending 12 years in Kenyan refugee camps, where Abdullahi and some of her siblings were born.

Starting in 2004, thousands of Somali Bantus were resettled in the US, where everything was unfamiliar to young Abdullahi, including the snow.

“And on top of that, I was surrounded by people that were not my color,” Abdullahi said. “So I just remember being really scared and just holding on to my mom's dress.”

Many refugee children end up struggling in school due to trauma, the challenges of picking up a new language and long breaks in their education. According to the United Nations High Commissioner for Refugees, only 3% of the world’s refugees end up going to college or pursuing other forms of post-secondary education.

Abdullahi excelled at school, but in many ways, she was an outlier — and her success came with plenty of complications.

This spring, Abdullahi, 23, was finishing up her senior year of pre-med at Smith College, an elite four-year institution in Massachusetts.

In many ways, Abdullahi had a typical college experience. She ran track, made friends and received good grades. But she was also a commuter, married and on a full scholarship. She said at times she felt like an outsider.

“Sometimes I'll be the only Black student in my class — or even the only one that was Muslim." 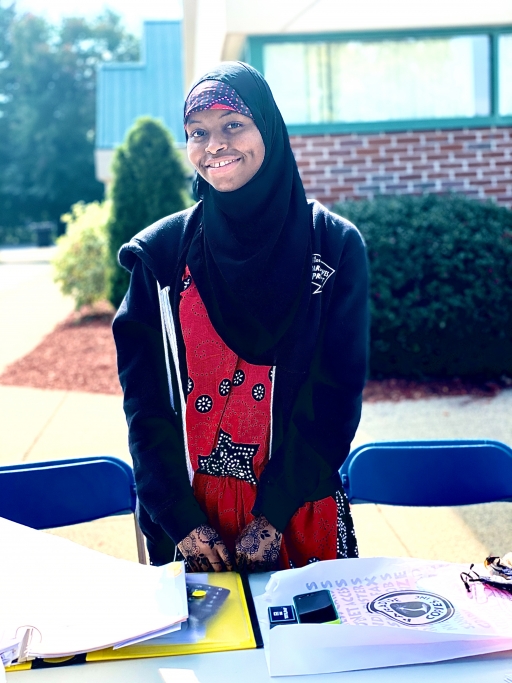 Rumbila Abdullahi at a Springfield farmers market in September 2020, where she worked as a translator for Somali Bantu farmers.

“Sometimes I'll be the only Black student in my class — or even the only one that was Muslim,” Abdullahi said.

Abdullahi also felt the weight of her parents’ trauma and their struggles in the United States. As a child, her parents sometimes reminded her and her siblings of what they’d gone through in Somalia and Kenya, putting pressure on the kids to succeed in school.

“Being drilled with that as a young girl,” Abdullahi said, “and growing up, and going to Smith, I carried that with me, you know.”

Abdullahi said her older siblings struggled in middle school — a hard time for many kids — compounded by the challenges of learning English. But Abdullahi benefited from starting school at an earlier age. She quickly mastered 1st grade and gained fluency in English. Before long, she was filling out official forms for her parents and translating their conversations with doctors.

That’s a role she still plays. Last year, her mom was admitted to the hospital with symptoms of congestive heart failure.

“The cardiologist was like, ‘She needs to get a pacemaker. Without it she’s probably not gonna last a year.’”

Abdulahi had difficulty explaining the purpose of the device to her mom, who became convinced that the doctors wanted to steal her organs.

Abdullahi’s goal now is to become a doctor serving Somali Bantus in her community, many of whom —  like her mom — distrust the US medical system. That’s partly due to trauma in the camps, Abdullahi said, and partly due to their traditional beliefs.

Parental expectations can be especially complicated to navigate for refugee children.

While Abdullahi’s parents supported her education, they also assumed she’d eventually take on the role of a traditional Somali Bantu wife: cooking for her husband and raising children at home. That didn’t leave much room to become a doctor.

'We carry a huge burden'

Nellie Tran, an associate professor in the school of education at San Diego State University, studied the experiences of Somali Bantu children as they entered public schools in 2005 and 2006. Almost every aspect of structured classroom education was unfamiliar to them, Tran observed.

“The children, the adults, the teachers, the staff, the school — everyone was discovering where the clashes were along the way.”

Due to a sheer lack of any formal education in the Kenyan refugee camps, the newly arrived Somali Bantu students needed to be shown how to form a line, and even how doorknobs worked, Tran said. They weren’t used to being divided up by age or grade. Some students resisted being separated from their siblings.

“The schools kept saying that they had never experienced this type of situation,” Tran said. “And they had lots of experience working with refugees and immigrants.”

Tran understands the complexity of Abdullahi’s and other Somali Bantu students’ situations — the challenges at school and the pressures coming from home — because she herself is the daughter of Vietnamese refugees.

“We carry a huge burden,” Tran said. “The immense pressure to find yourself as you go through college and go through your own personal development, while staying connected to the people who you love the most — and who also have probably created the most pain for you — is really hard,” she said.

But Abdullahi — through determination, genuine interest and her arrival in the US at a younger age — has beaten the odds when it comes to academic success. 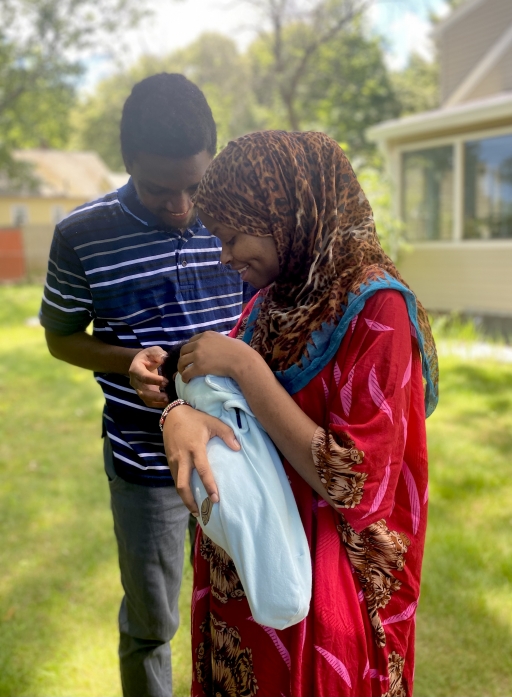 In May, shortly after taking the Medical College Admissions Test and wrapping up her coursework, Abdullahi gave birth to her first child, Nabeel. Two weeks later, she graduated from Smith College.

Abdullahi’s husband, Ibrahim Abdi, who was also born in a refugee camp in Kenya, watched the ceremony from home with the baby. Abdi cheered as his wife’s name was announced and watched as she walked across the stage.

“Wohoo! You did it! You did it!” Abdi shouted, and turned toward the baby crib. “Nabeel, mommy graduated!”

Then, talking maybe to the baby, or maybe just to himself, Abdi said, “Four years of hard work.”