Every day, for the past two weeks, Paulina Bownik has driven a 45-mile round trip from her home in Białystok, in northeastern Poland, to the border with Belarus. Bownik, a general practitioner, carries boxes of antibiotics and anti-inflammatories that she hopes to give to 32 Afghans stranded at the border.

The group has been there for almost a month, unable to move, as soldiers and border police from both countries stand guard. The camp is located at the edge of a forest near the Polish village of Usnarz Gorny, but Poland says it’s on Belarusian territory. Belarus, on the other hand, says the migrants are on Polish soil.

Officials from both countries have told the migrants they should apply for asylum in the opposite nation.

On the first day Bownik drove to the camp, Polish border guards stopped her.

“I asked the soldiers if I could give them the medicines and they told me that this is not possible. They told me I have to be, like, 15 meters from this camp."

“I asked the soldiers if I could give them the medicines and they told me that this is not possible. They told me I have to be, like, 15 meters from this camp,” she said. 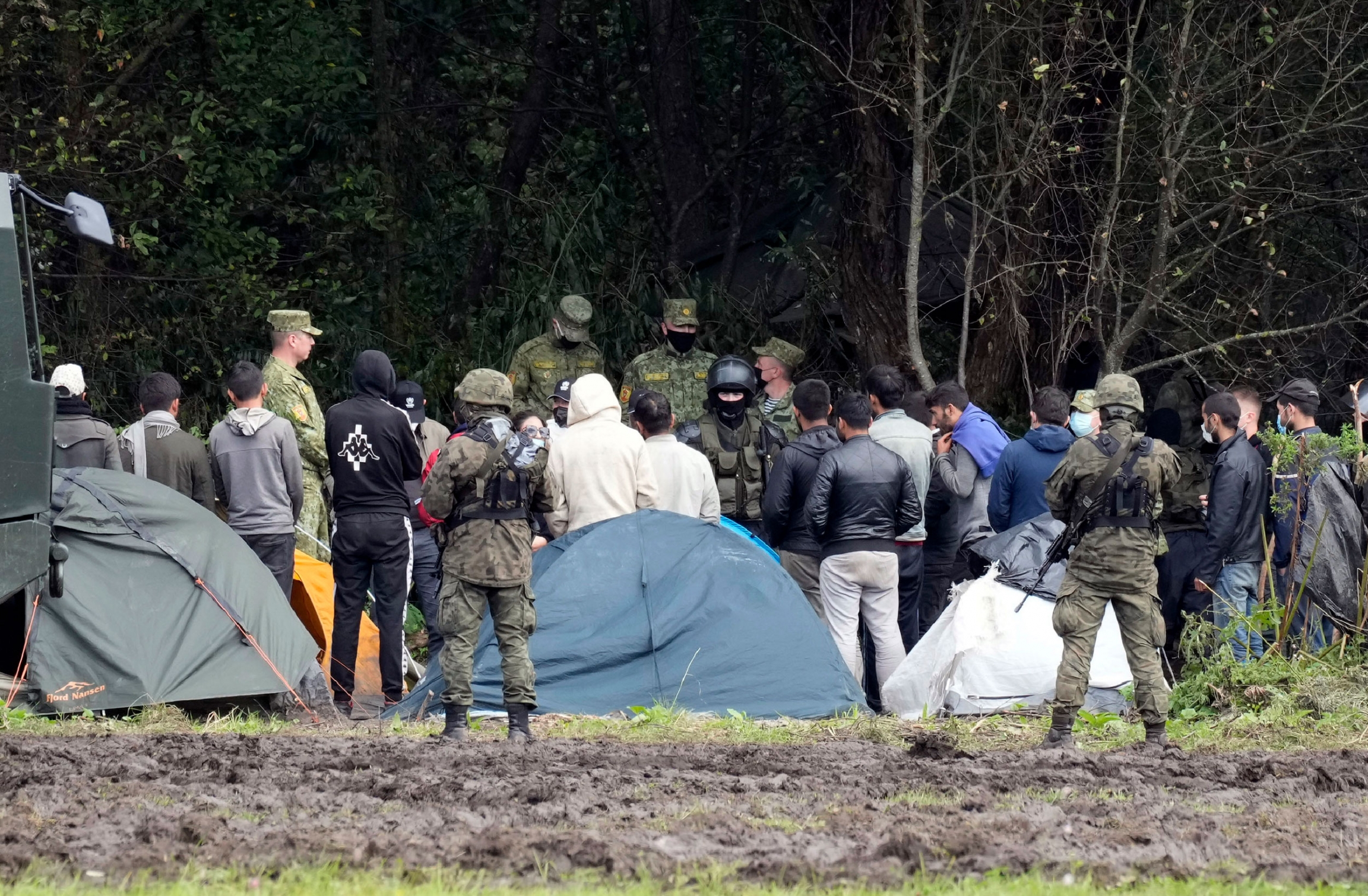 Human rights activists, journalists and doctors like her come to the camp, but a wall of soldiers keeps them from reaching the Afghans.

Sometimes the activists communicate using loudspeakers and the migrants shout back, but Bownik said the guards usually start to sound sirens or turn on engines to drown out the conversation. 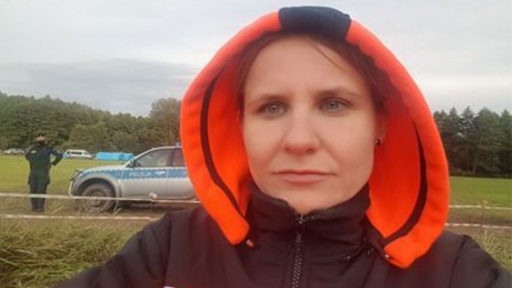 Bownik is worried about the migrants’ health. A woman collapsed this week, and the group was unable to revive her for over 40 minutes, she said. When campaigners called an ambulance to assist another migrant, police stopped the vehicle from gaining access.

Conditions at the camp are harsh.

Marta Górczyńska, a Polish human rights lawyer, said it's the most difficult situation she has witnessed in 10 years of working with refugees.

“It has never happened to me to feel such helplessness, being so close to people that need immediate assistance and not being able to help just because the government is saying that nobody's allowed to access the place where they're camping."

“It has never happened to me to feel such helplessness, being so close to people that need immediate assistance and not being able to help just because the government is saying that nobody's allowed to access the place where they're camping,” Górczyńska said.

Continuous rain and near-freezing temperatures at night also exacerbate the situation. The migrants say they are struggling to survive. In a video message recorded by one of the Afghans on his mobile phone, and sent to a local human rights group, he said they have barely any food or water.

Related: 'We are afraid': An Afghan women's rights activist is left behind

A couple weeks ago, the European Court of Human Rights called on Poland to intervene and help the migrants on its borders. The court requested "that the Polish authorities provide all the applicants with food, water, clothing, adequate medical care and, if possible, temporary shelter.”

Górczyńska said Poland has refused to agree to the request, saying the migrants are on Belarusian soil, and therefore not its responsibility. A few Belarusian guards have given them some food, she says, but it’s not enough. 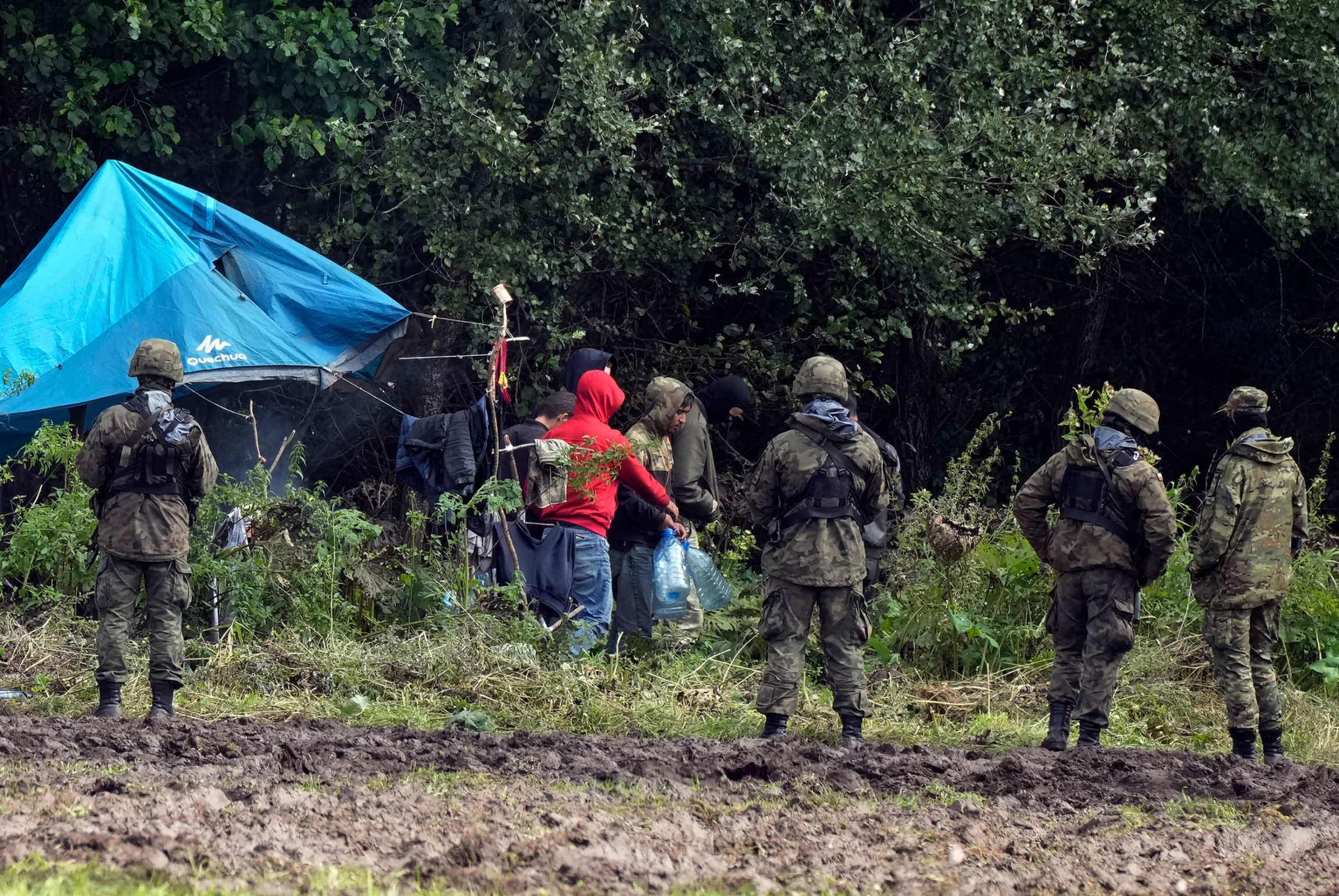 Migrants stuck along the Poland-Belarus border carry plastic water bottles as they are surrounded by Polish forces in Usnarz Gorny, Poland, on Wednesday, Sept. 1, 2021.

The dispute is not just between Poland and Belarus.

Migrants, mainly from Iraq and Afghanistan, are also camped on the Belarusian border with Latvia and Lithuania.

The EU has accused Belarusian President Alexander Lukashenko of trying to destabilize the European Union by facilitating illegal immigration into the three countries.

EU Commissioner for Home Affairs Ylva Johansson said Lukashenko’s actions were in retaliation for sanctions imposed by the EU on Belarus in June after the brutal crackdown on opposition protesters in the streets. Lukashenko also faced international condemnation following the forced landing of an Athens-Vilnius flight in Minsk in May, and the arrest of an opposition activist on board.

In late August, Poland announced plans to build a fence along its entire border with Belarus and double the number of troops stationed there. The country’s Deputy Foreign Minister Marcin Przydacz said Poland would not let the 32 Afghans stationed near the village of Usnarz Gorny apply for asylum in Poland.

Related: Afghan families are being rapidly resettled in the US. But adjusting will take years.

"These are not refugees, they are economic migrants brought in by the Belarusian government," he said.

Renata Mieńkowska-Norkiene, associate professor at the faculty of political science and international studies, University of Warsaw, said Poland is playing the stand-off to its advantage. The Polish government is using the situation to highlight the EU’s failings on migration, while also appearing to be critical of Russia, she said.

It also allows the ruling Law and Justice party to play its anti-immigrant card. The ruling party regularly stokes up nationalistic sentiment to gain voter support, particularly in the lead up to elections. Ahead of the 2015 parliamentary election, party leader Jarosław Kaczyński talked about migrants bringing over “very dangerous diseases” long absent from Europe.

The crisis puts opposition parties in Poland in a bind. Donald Tusk, leader of the opposition Civic Platform party and a former prime minister, said the migrants deserve humanitarian assistance but “Polish borders must be tight and well protected.”

Mieńkowska-Norkiene said opposition politicians who express support for the migrants, or condemn the Polish government’s intransigence, are in danger of being seen as unpatriotic or pro-Russia.

“If the opposition says, look this is a humanitarian problem, we need to help these people, then immediately it's accused of being anti-Polish, or of acting on Putin's side." 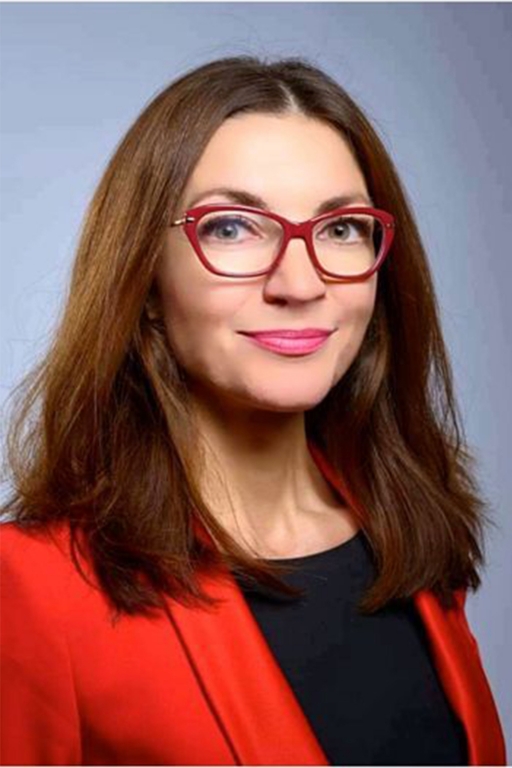 “If the opposition says, look this is a humanitarian problem, we need to help these people, then immediately it's accused of being anti-Polish, or of acting on Putin's side,” Mieńkowska-Norkiene said.

On Thursday, Polish President Andrzej Duda declared a state of emergency in two provinces near its border with Belarus. It’s the first time the country has made such a declaration since communist times.

Interior Minister Mariusz Kamiński said the action was supported by the local authorities in the region and it was "in the interests of the safety of our citizens, especially the inhabitants of border towns.”

Human rights lawyer Górczyńska fears the effect the ruling will have for activists trying to record what’s happening to migrants camped along the border.

“We may not be able to enter some of the border zones where other people are being pushed back and then will have no chance to document what's happening there,” Górczyńska said.

Doctor Bownik worries how the ruling will affect the mental health of the 32 Afghans camped near Usnarz Górny. “I think we bring them hope,” she said. “They thank us every day for being there.”

Bownik said she fears what will happen when there is no one there to keep an eye on the camp and monitor the police.

“If we’re not there, I think that Polish police and police soldiers will do whatever they want to those people.”

On Thursday night, journalists and activists were told to leave the border area or face a fine and possible arrest.