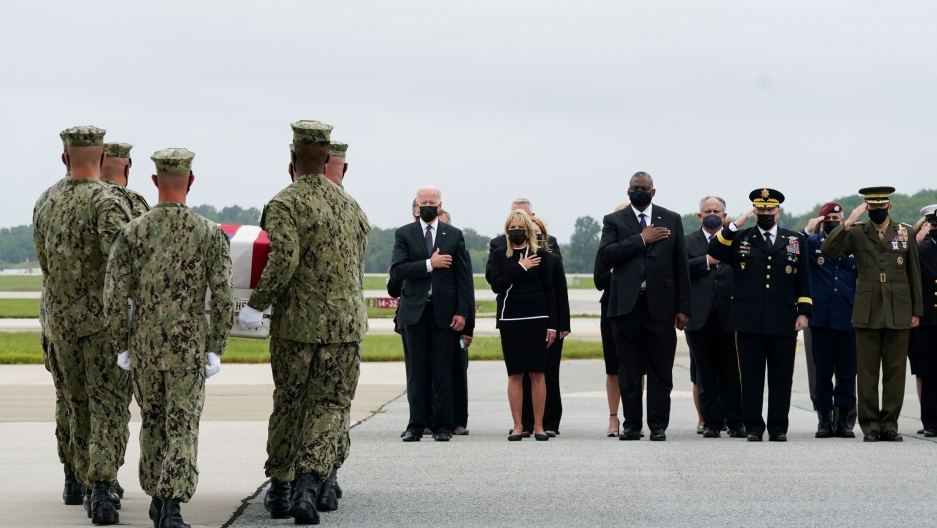 The US military flew more desperate evacuees out of the Afghan capital on Monday in the waning hours of a final American withdrawal as the ISIS' Afghanistan affiliate claimed responsibility for targeting the Kabul airport with rockets. The US military reported no American casualties.

The focus of the US evacuation was increasing on getting the last Americans out. Senior administration officials said Sunday that the United States has the capacity to evacuate the approximately 300 US citizens remaining in Afghanistan who want to leave before President Joe Biden's Tuesday deadline.

"This is the most dangerous time in an already extraordinarily dangerous mission these last couple of days," said America's top diplomat, Secretary of State Antony Blinken.

The steady stream of US military jets taking off and landing at Hamid Karzai International Airport in Afghanistan's capital continued Monday even after rocket fire targeted the airport and rockets hit a nearby neighborhood. US Central Command spokesman Bill Urban said five rockets targeted the airport and a US defensive system on the airfield known as a Counter Rocket, Artillery and Mortar System, or C-RAM, was employed against them. He said there were no US casualties and the airfield continued to operate. Further details were not immediately available. The White House said Biden had been briefed on the rocket attack.

Biden's national security adviser, Jake Sullivan, said Sunday that for those US citizens seeking immediately to leave Afghanistan by the looming deadline, "we have the capacity to have 300 Americans, which is roughly the number we think are remaining, come to the airport and get on planes in the time that is remaining."

The White House said Monday morning that about 1,200 people were evacuated from Kabul over the prior 24 hours aboard 26 US military flights and two allied flights.

Sullivan said the US does not currently plan to have an ongoing embassy presence after the final US troop withdrawal. But he pledged the US "will make sure there is safe passage for any American citizen, any legal permanent resident," after Tuesday, as well as for "those Afghans who helped us." But untold numbers of vulnerable Afghans, fearful of a return to the brutality of pre-2001 Taliban rule, are likely to be left behind.

Blinken said the US was working with other countries in the region to either keep the Kabul airport open after Tuesday or to reopen it "in a timely fashion."

He also said that while the airport is critical, "there are other ways to leave Afghanistan, including by road, and many countries border Afghanistan." The US, he said, is "making sure that we have in place all of the necessary tools and means to facilitate the travel for those who seek to leave Afghanistan" after Tuesday.

There also are roughly 280 others who have said they are Americans but who have told the State Department they plan to remain in the country or are undecided. According to the latest totals, about 114,000 people have been evacuated since Aug. 14, including approximately 2,900 on military and coalition flights during the 24 hours ending at 3 a.m. Sunday.

Members of Congress criticized the chaotic and violent evacuation.

"We didn't have to be in this rush-rush circumstance with terrorists breathing down our neck," said Sen. Mitt Romney, R-Utah. "But it's really the responsibility of the prior administration and this administration that has caused this crisis to be upon us and has led to what is without question a humanitarian and foreign policy tragedy."

Senate Republican leader Mitch McConnell of Kentucky said the US policy in Afghanistan, with 2,500 troops on the ground, had been working. "We were, in effect, keeping the lid on, keeping terrorists from reconstituting, and having a light footprint in the country," he said.

US officials said Sunday's American drone strike hit a vehicle carrying multiple ISIS suicide bombers, causing secondary explosions indicating the presence of a substantial amount of explosive material. A senior US official said the military drone fired a Hellfire missile at a vehicle in a compound between two buildings after people were seen loading explosives into the trunk.

The official said there was an initial explosion caused by the missile, followed by a much larger fireball, believed to be the result of the substantial amount of explosives inside the vehicle. The US believes that two ISIS group individuals who were targeted were killed.

In a statement, US Central Command said it is looking into the reports of civilian casualties that may have been caused by the secondary explosions. An Afghan official said three children were killed in the strike. The officials spoke on the condition of anonymity to discuss military operations.

It was the second airstrike in recent days the US has conducted against the militant group, which claimed responsibility for the suicide bombing Thursday at the Kabul airport gate that killed 13 US service members and scores of Afghans struggling to get out of the country and escape the new Taliban rule. The Pentagon said a US drone mission in eastern Afghanistan killed two members of ISIS' Afghanistan affiliate early Saturday local time in retaliation for the airport bombing.

In Delaware, Biden met privately with the families of the American troops killed in the suicide attack and solemnly watched as the remains of the fallen returned to US soil from Afghanistan. First lady Jill Biden and many of the top US defense and military leaders joined him on the tarmac at Dover Air Force Base to grieve with loved ones as the "dignified transfer" of remains unfolded, a military ritual for those killed in foreign combat.

The 13 service members were the first US troops killed in Afghanistan since February 2020, the month the Trump administration struck an agreement with the Taliban in which the militant group halted attacks on Americans in exchange for a US agreement to remove all troops and contractors by May 2021. Biden announced in April that the 2,500 to 3,000 troops who remained would be out by September, ending what he has called America's forever war.

The White House has rescheduled Biden's meeting with Ukraine's president, Volodymyr Zelenskyy, from Monday to Wednesday as the US pullout from Afghanistan enters its tense final hours.