Editor’s note: Afghan scholar Hanif Sufizada, who works at the Center for Afghanistan Studies at the University of Nebraska Omaha, got caught in Kabul during the chaos of the US military pullout, when thousands of Afghans fled to the airport, seeking a way out of the country. The Conversation's editor Catesby Holmes sent Sufizada an email on Aug. 17, 2021, telling him that she hoped he was OK — and his email back showed that he wasn’t. Sufizada’s dispatches from Aug. 17 and 18 advance an important story: He brings an on-the-ground account of his struggle to leave Afghanistan and the impossible and irrational obstacles he had to overcome in order to flee — all of which he faced even though he is a US resident with a green card and a family in Omaha. Sufizada, an economics scholar and former Afghan government official whose most recent story for The Conversation was “The Taliban are megarich — here’s where they get the money they use to wage war in Afghanistan,” wrote us from Qatar on Wednesday morning, Aug. 18, that he finally secured passage on a plane out of a US military base in Qatar. As of Aug. 19, he's still waiting there for the much-delayed flight to depart.

I was in Kabul when all this chaotic situation broke out. When I went to the airport to fly out of Kabul on Sunday, the day Taliban took over Kabul, I was lost and unable to locate American forces to evacuate me.

Before going to the airport I went to the US Embassy, but no one was there because they had shifted their entire embassy to the Hamid Karzai International Airport. Tired and fearful of the Taliban capture of Kabul, I managed to enter the airport.

Because I filled out the Online Evacuation Request Form, I wanted to meet the evacuation team to explain my case. When I reached there, everything was chaotic. There was only one single civilian plane, which we were told was dedicated to the evacuation of Afghan officials. Even some people with valid tickets were canceled to fly, they were replaced, we believed, with high-ranking officials.

People like me just felt shocked and fearful of the evolving situation. So I searched for more than two hours to find Americans. Thanks to an employee of the airport who told me where Americans were, after waiting for several hours, I met an American soldier and begged him to evacuate me. He did help and wanted to check me in. 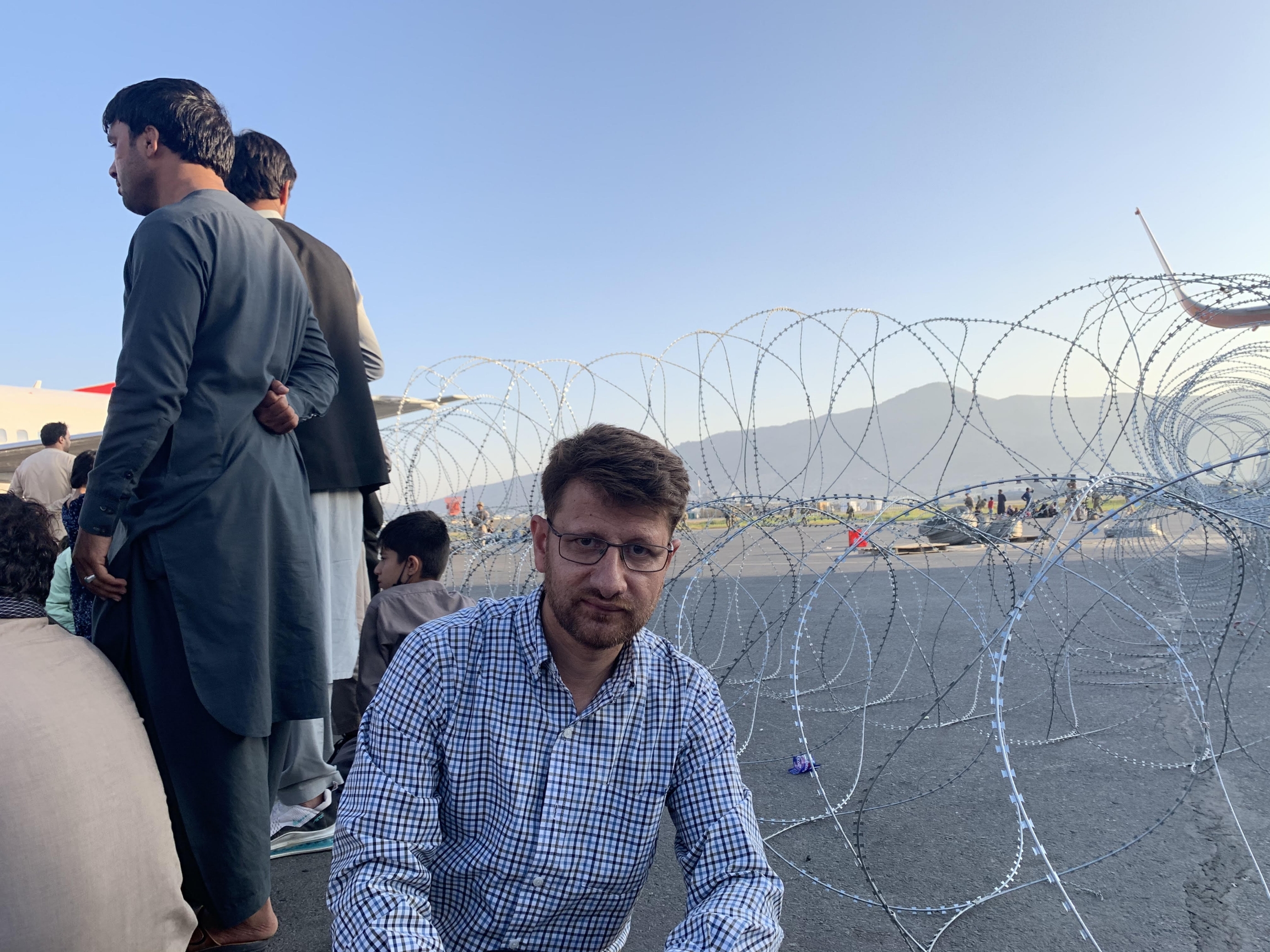 But while waiting in the queue, a mob of people threatened by the Taliban rushed to American troops for evacuation. So I was forgotten and soldiers had to control the unruly mob. Eventually, they sent back everybody. I came back from the point it took me nine hours to reach. I spent the entire night, staying up and asking soldiers to allow me to evacuate because I have a valid US green card. They didn’t listen and I had to stay up until morning.

Hungry, thirsty, tired and scared, I, along with two others, Afghan German and Afghan British, were struggling to be evacuated. I approached all people for help to get evacuated, but the situation was so chaotic that nobody heard us. I was caught several times amid repeated gunfire. We were a group of three people — the US Marines saved all of us. However, initially they thought that we were from among the mob who would rush to the airplane. We were not.

Finally, I got a chance to speak with one of the Marines and explain that we had valid US, German and British documents and were eligible for evacuation. Others sought help from their embassies but they didn’t get any assistance. I convinced one of the Marines that I have a green card and also work for a university in the US. He then gave me permission and it was around 4 p.m. on Monday. After looking at our documents, he gave us a green signal to be separated from the mob. That was a moment of relief. He told us to go to the north gate.

Here, I was separated from the two others, who flew British airlines.

After going to the north gate of the American base in Hamid Karzai International Airport, I was manifested and got ready to fly by military plane.

Then I had to wait another nine hours to get into the plane — still sleepless. 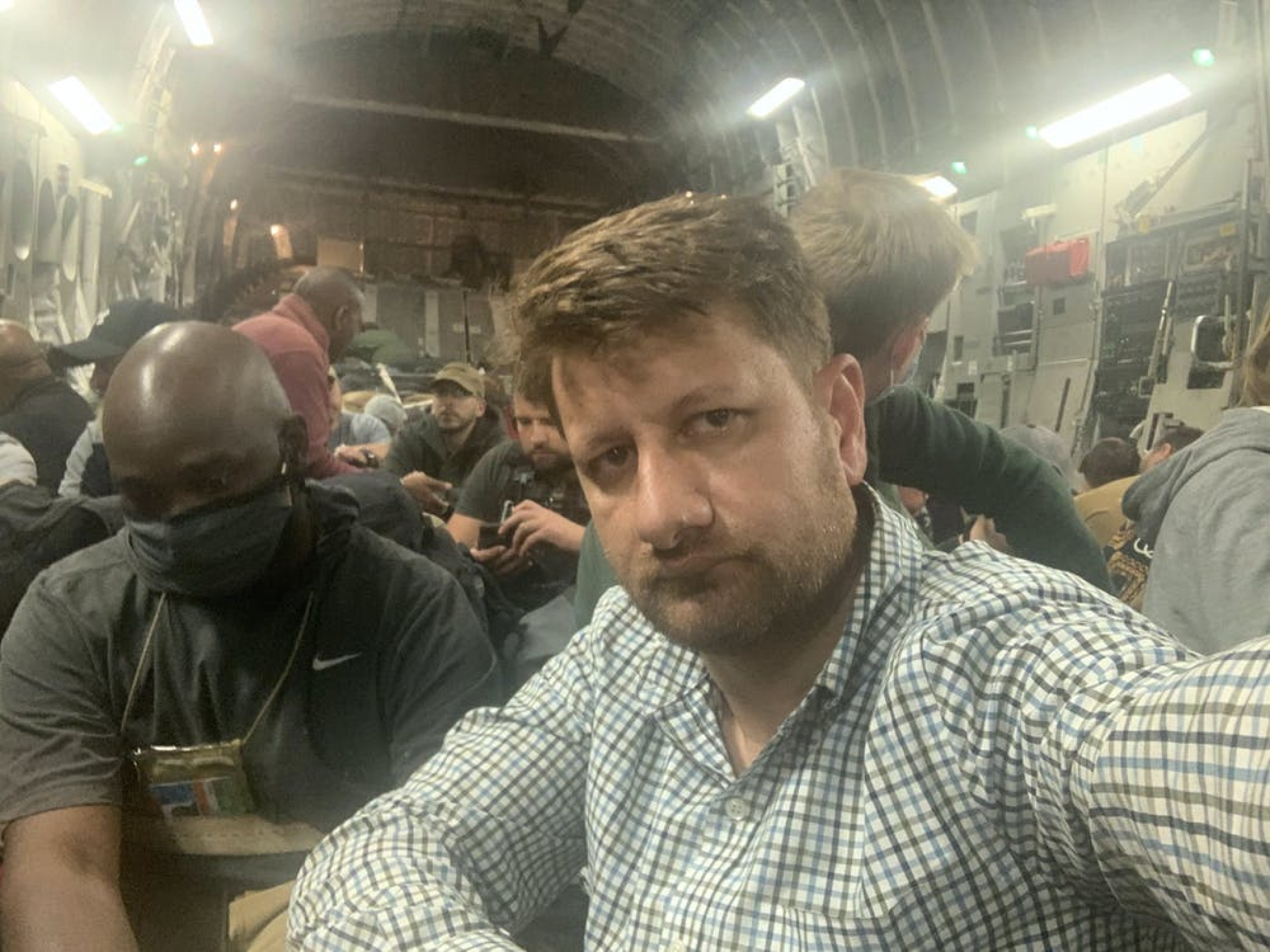 Finally, on the plane out of Kabul.

We arrived in Qatar at 5:30 a.m. and as of writing this to you — after almost 13 hours still sleepless — I am still in Qatar waiting for my flight to Kuwait, from where I will go to Washington, DC, and then to Omaha. It has been such a torment so far. But we are safe from the Taliban.

I am so tired and my kids, who are in Omaha, are waiting to receive me. I don’t know how I feel, but I am happy coming home after all this drama.

Now I am at Al Udeid Air Base in Qatar, where I have been waiting and waiting to get clearance to go to USA. I came here at 5:30 a.m. and now it is 12:35 p.m. and I am still waiting for clearance. I am tired, weak and feel helpless.

After almost 35 hours, I got the opportunity to fly to Washington, DC, in a special commercial flight chartered by the American Army. My current supervisor from the University of Nebraska Omaha, my former supervisor from Tetra Tech, my American classmates from Cornell University, and friends all helped and sought the assistance of their representatives and senators for my evacuation.

Hanif Sufizada is Education and Outreach Program Coordinator at the Center for Afghan Studies, University of Nebraska Omaha. This article is republished from The Conversation, a nonprofit news organization dedicated to sharing the knowledge of scholars, under a Creative Commons license.