Editor's note: The situation in Afghanistan is changing rapidly. This segment aired on The World on Aug. 11. It includes interviews conducted by our reporter Shirin Jaafari, who was in Afghanistan in late July. The country has since been overtaken by the Taliban. Stay tuned to The World for more updates on the developments in Afghanistan.

The Taliban swept into Kabul, Afghanistan, on Sunday after President Ashraf Ghani fled the country, bringing an end to a two-decade campaign in which the US and its allies had tried to transform Afghanistan.

The country's Western-trained security forces collapsed, or fled, ahead of the planned withdrawal of the last American troops at the end of the month.

Related: Taliban take over Afghanistan: What we know and what's next

The lightning Taliban offensive across the country appears to have stunned American officials. Just days before the insurgents entered Kabul with little, if any, resistance, a US military assessment predicted it could take months for the capital to fall.

In Herat, a key city in the battle for Afghanistan, Taliban fighters rushed past the Great Mosque in the historic city — which dates back to 500 BC and was once a spoil of Alexander the Great — and seized government buildings. Witnesses described hearing sporadic gunfire at one government building, while the rest of the city fell silent under the insurgents’ control.

Herat had been under militant attack for two weeks, with one wave stymied by the arrival of warlord Ismail Khan and his forces. But on Thursday afternoon, Taliban fighters broke through the city's defensive lines and later said they were in control.

Related: Taliban seize Herat and assault nearby dam that provides water and power to hundreds of thousands of Afghans

Following the takeover, photos and videos circulated online showing Taliban fighters surrounding Khan’s villa. In one video put out by a pro-Taliban account, a Taliban member is shown interviewing Khan about the plight of Afghanistan.

“Afghanistan is in a terrible situation. There is a lot of insecurity. I hope we can work together to end these problems.”

“Afghanistan is in a terrible situation,” Khan told him, looking reserved. “There is a lot of insecurity. I hope we can work together to end these problems.”

The Taliban’s spokesperson, Zabihullah Mujahid, later put out a statement on social media saying, “Khan and all his soldiers have joined the Islamic Emirate.”

TOLONews reported on Monday that Khan is now in Iran, in the city of Mashhad.

Mohammad Ismail Khan is in Iran, in the city of Mashhad, having traveled from Afghanistan with the coordination of the Taliban, sources close to the former jihadi leader said.

Khan stayed at his residence in Herat four days after surrendering to the Taliban. pic.twitter.com/JZggNeuYH6

This is the second time since the 1990s that Khan has taken refuge in Iran — fleeing the Taliban — according to Euronews.

The World interviewed Khan and some of his fighters at the former governor’s villa in Herat in late July, only days before the city fell. Below are some images and excerpts from those interviews.

Who is ‘the Lion of Herat?’

To meet with Khan, the former governor and warlord, at his villa in Herat, you have to walk past several concrete barriers and go through two metal gates protected by armed guards.

Related: Afghans in a city under siege by the Taliban: ‘The insecurity has upended our lives’

There, you’re escorted through the garden and greeted by flamingos, peacocks and parrots, among other animals. 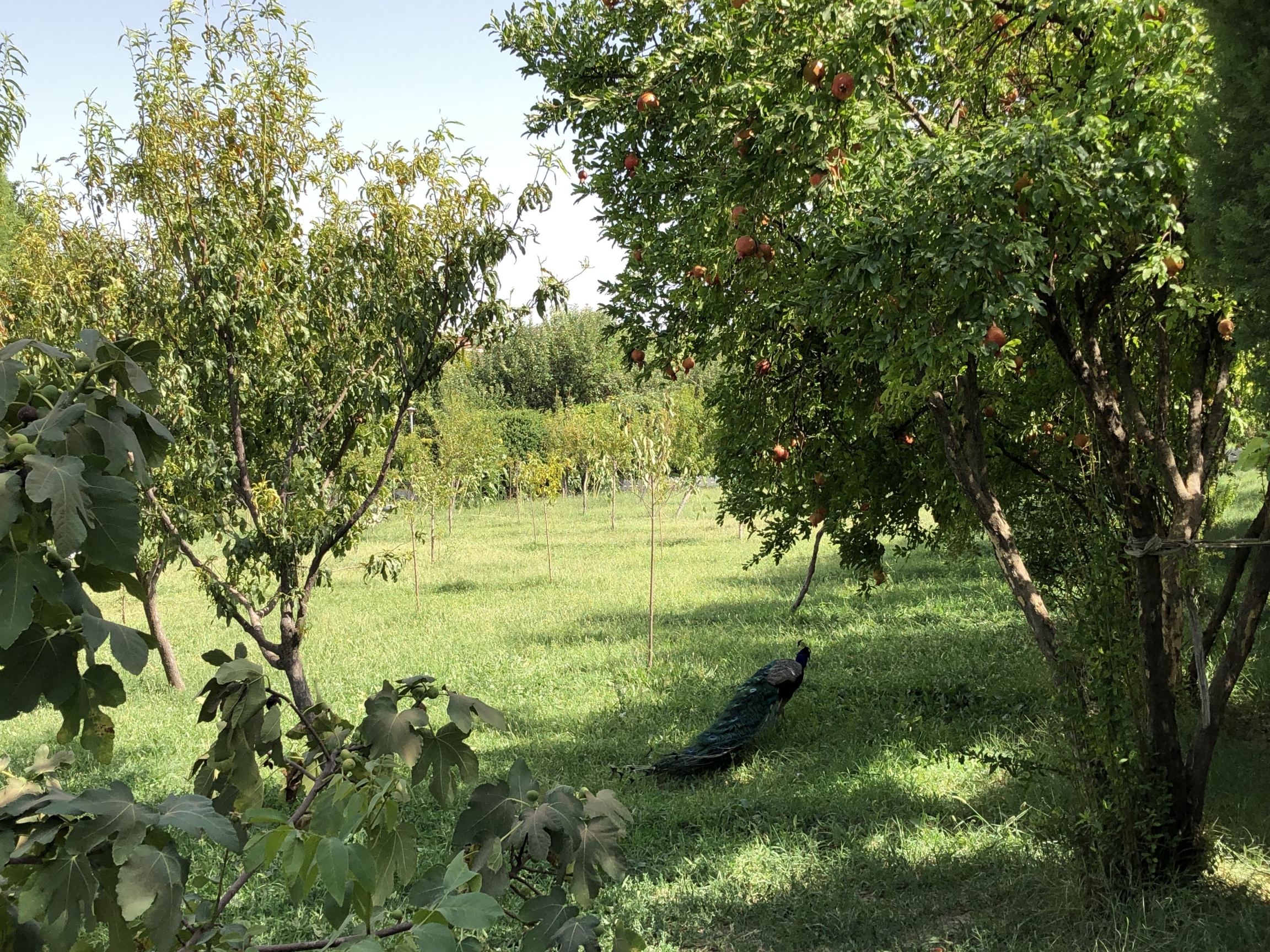 Ismail Khan's villa in Herat, Afghanistan, with a garden, is shown in late July.

According to the guard, the animals were gifted to Khan by his supporters and well-wishers.

Khan is 72 years old and soft-spoken, with a long, white beard. His supporters call him “the Lion of Herat.”

Related: The Afghan government failed to earn the trust of its people, retired US Army col. says

Khan fought the Soviets in the 1980s. He took up arms against the Taliban in the ’90s, and then spent time in Taliban captivity.

After the US-led invasion, he served in the Afghan government.

“I had no intention of getting involved in the fighting. I expected the peace negotiations [between the Taliban and the Afghan government] to lead to a settlement. But every day, I watch as the Taliban get[s] closer and closer to major cities. So, it’s my duty to stand up against them.”

“I had no intention of getting involved in the fighting,” Khan told The World in July. “I expected the peace negotiations [between the Taliban and the Afghan government] to lead to a settlement. But every day, I watch as the Taliban get[s] closer and closer to major cities. So, it’s my duty to stand up against them.”

When the US announced its unconditional withdrawal in April, Khan began to revitalize his militia. He called on people to join him in defending the historic city.

The men in Khan’s militia received a stipend — and weapons — from the Afghan government. 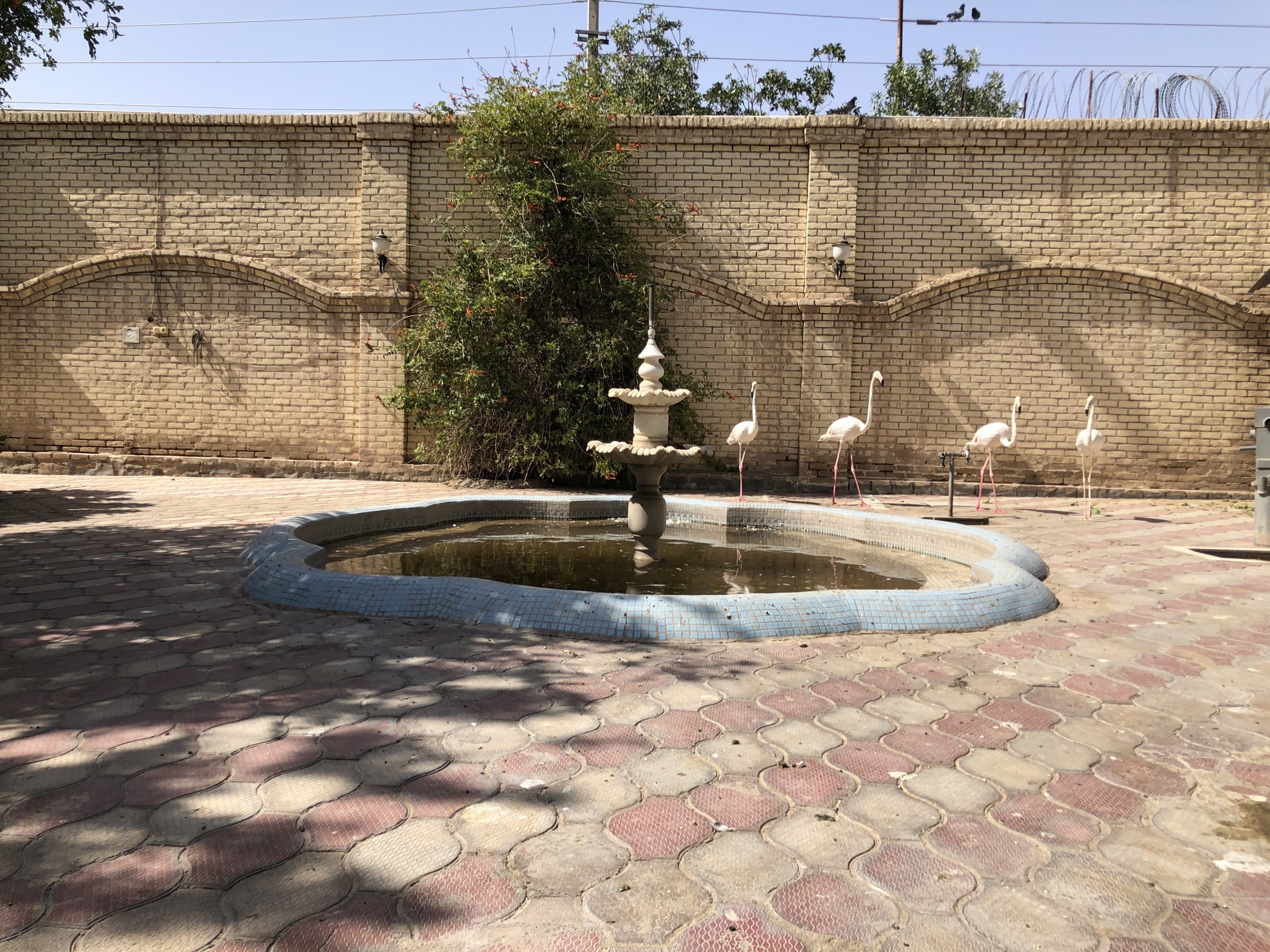 When asked where the weapons come from, Khan scoffed.

“Afghanistan is like a weapons depot,” he said. “There is no shortage of guns. Every household has them. Some are old AK-47s that people hid away from the last wars, others are more recent.”

Khan said the US withdrawal from Afghanistan has been chaotic and mismanaged.

“The US had to leave, there is no question about that. But they should have planned their exit in a better way, so it didn’t lead to this mayhem that we’re seeing today.”

“The US had to leave, there is no question about that. But they should have planned their exit in a better way, so it didn’t lead to this mayhem that we’re seeing today,” Khan said.

Khan complained that no one from the US consulted him about the withdrawal.

“We were left in the dark,” he explained.

Pirouz Ahmad, 45, was among the throngs from across the country who responded to Khan’s call to take up arms against the Taliban. 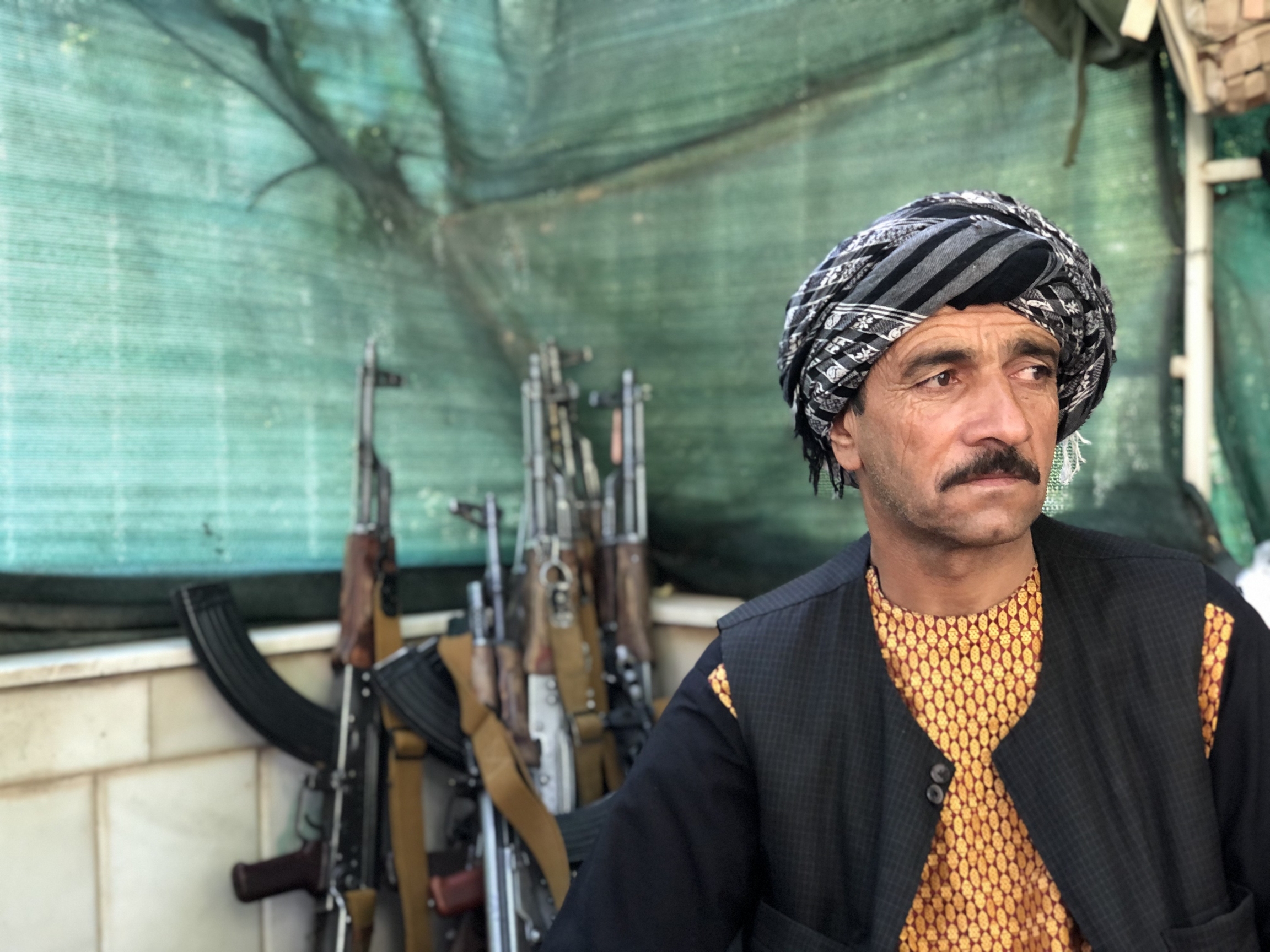 Pirouz Ahmad, 45, was among the throngs from across the country who responded to the former warlord Ismail Khan’s call to take up arms against the Taliban.

Pirouz Ahmad was on hand at Khan’s villa in late July. He told The World that he came to Herat from Faryab, a province in the north. He added that he and 40 other men joined Khan’s militia.

Pirouz Ahmad had never been on the front lines or fought in any wars. But he said he was ready to kill if he needed to.

Pirouz Ahmad said he saw the Taliban's fight as “unjust.”

“The Americans are gone. Who are they fighting now?” he asked.

Pirouz Ahmad worked in Iran for 13 years. The pressure to earn an income for his family of five meant that he had to give up on education. He said that is something he deeply regrets.

“I couldn’t get an education. I don’t want my daughter, nieces and nephews to be like me. I want them to go to school without fear of getting killed,” he said. 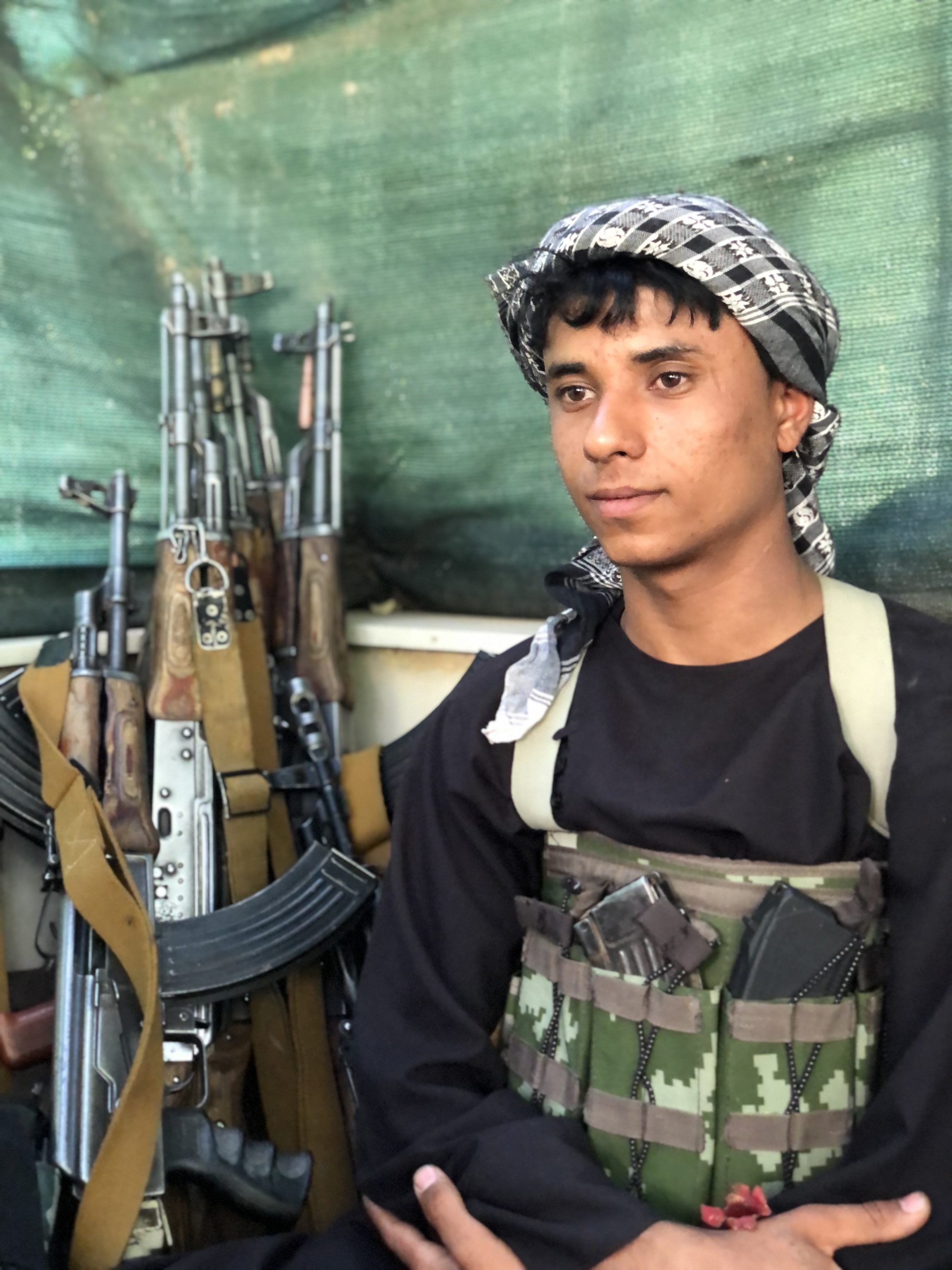 Mohammad Asef, 20, was at Ismail Khan's villa in Herat, Afghanistan, in late July, to fight the Taliban. "These guys [the Taliban] are not Muslims. They kill their own brothers and sisters. That's why I am fighting them," he said.

The return of armed militias was a reversal of what the US and its Afghan partners tried to achieve in the past two decades, according to journalist and academic Dawood Azami.

“The strategy since the new government was established after the fall of the Taliban had been to weaken these powerful commanders, different islands of power in Afghanistan,” he said.

The goal was to bring stability to the country by strengthening the central government and its military. The way they did that is that they bought back weapons from the warlords and offered their fighters jobs in the army, Azami said.

Now, all of that is being undone.