In the Colombian town of Necoclí, hundreds of migrants line up under the sun each day — they wait for boats to take them one step closer to the border with Panama.

Many of the migrants wear rubber boots. Some wrap their luggage in plastic bags sealed with tape.

They're preparing to cross the Darién Gap, a wet and roadless jungle that separates Colombia from Central America. It’s a dangerous crossing; some say they’ve seen corpses along the route, and many have been robbed. But people here say they’re willing to take the risk. 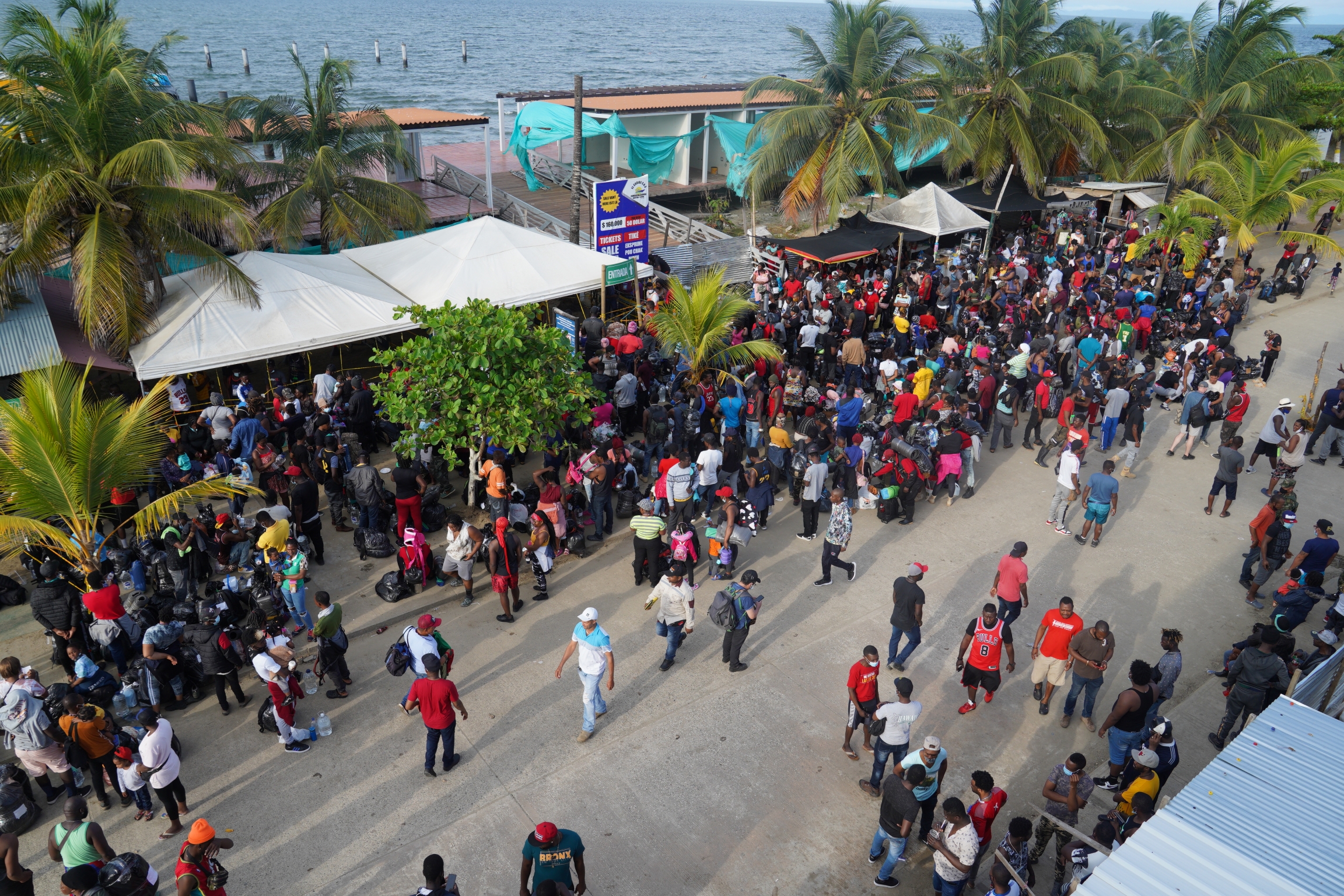 Migrants headed toward Panama wait for boats in the town of Necocli, Colombia, on Aug. 6, 2021. Most come from Haiti and Cuba and have been living in South American countries for several years.

For those who travel from South America and have no visas, it's the only way to reach the United States.

“Only God knows what will happen,” said Ronald Toussain, a Haitian migrant waiting to get on one of the boats. “They can’t rob 100% of the people, so some will suffer, but others will be fine."

According to Panama’s government, at least 46,000 migrants have crossed the Darién Gap this year and checked in at shelters on the northern side of the jungle where they get access to health care. 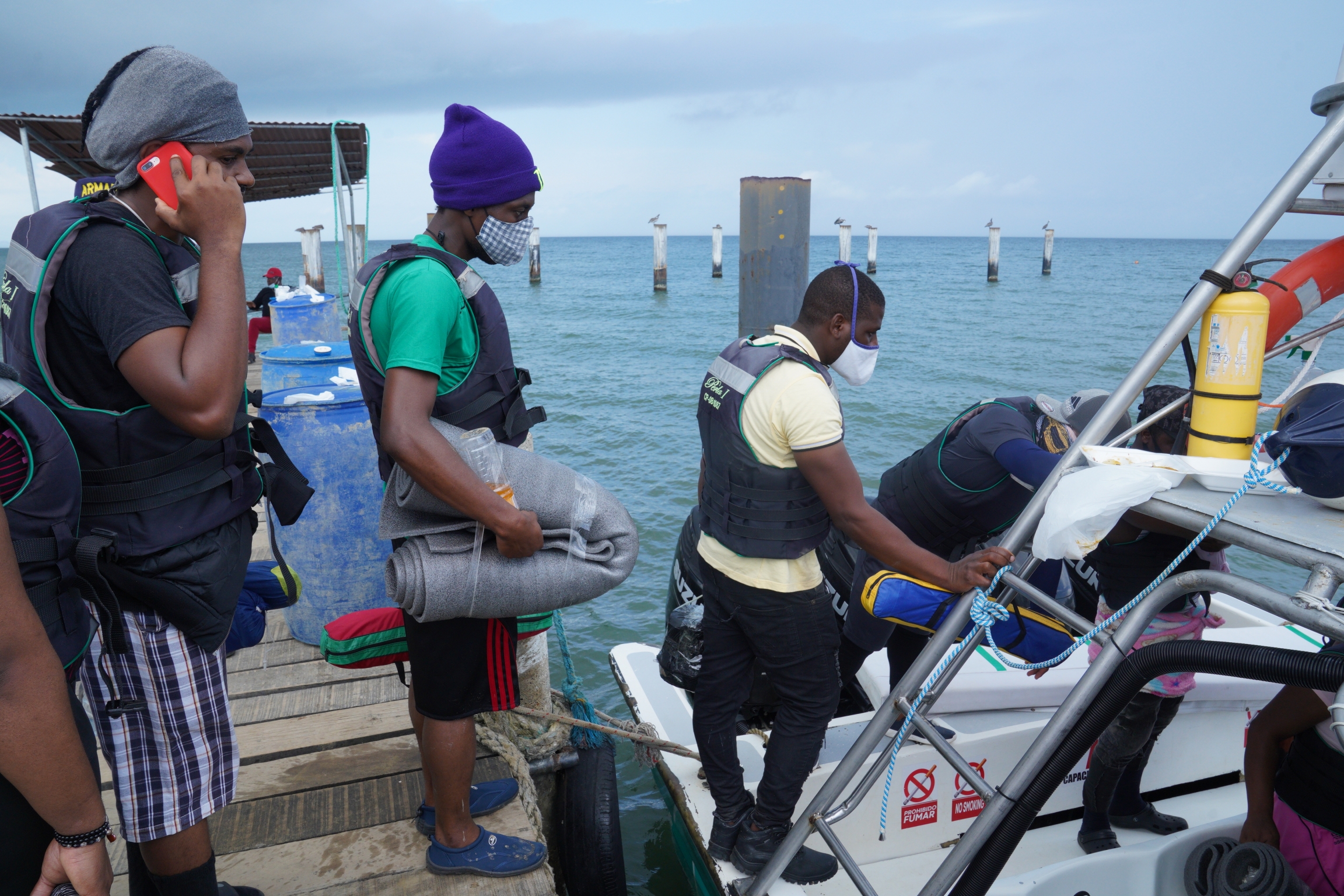 A group of Haitian migrants boards a boat that will take them from Necocli, Colombia, to the village of Capurgana, where the trail through the Darién Gap begins.

Many of those attempting to cross the Darién Gap, nowadays, are Haitians and Cubans who had been living in South America for the past few years. They say that the pandemic has made it harder for them to make a living in places like Brazil or Chile.

Joseph Dickinsons traveled with his wife and three children, including a 7-year-old who was born in Brazil. He said that the devaluation of Brazil’s currency was one of the reasons he was on the move again.

“Brazil is a great country where people respect immigrants,” said Dickinsons, who has made a living in construction and at a slaughterhouse in the Brazilian state of Paraná. “But my salary there was only about $200 a month.”

Related: Colombian Deportado Coffee's founder hopes to open a conversation about US immigration

Others say that immigration laws made them move.

Docasse Montry, from Haiti, had been living in Chile for the past four years. She was traveling to the US with her 2-year-old daughter who was born in that country.

“I couldn't’ manage to get residency papers in Chile, and without that, you can’t get good jobs there.”

“I couldn't manage to get residency papers in Chile,” Montry said. “And without that, you can’t get good jobs there.”

But getting to the US is risky and expensive.

Once migrants leave Necoclí on boats, they arrive in the town of Capurganá where the trail through the Darién Gap begins. 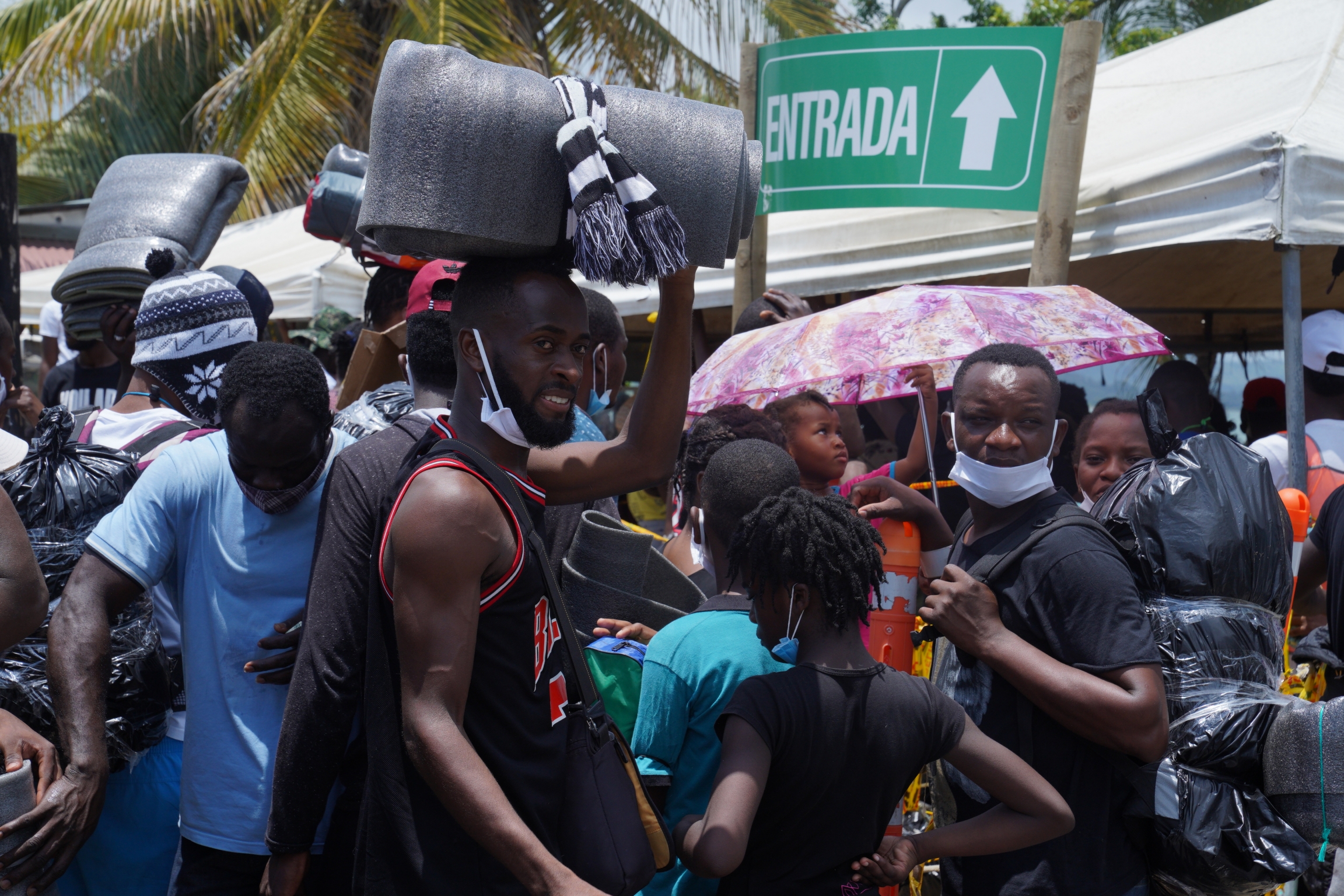 US-bound migrants carry foam mattresses and wrap their luggage in garbage bags sealed with tape. They are preparing to cross the Darién Gap, a wet and roadless jungle that separates Colombia from Central America.

Some find that they’re not fit enough to make the seven-day trek.

Danay Valdez and her son, Raisel, originally from Cuba, have made three unsuccessful attempts to cross the Darién. On their first try Valdez, who is overweight, fell and fractured her tailbone. The two had to turn back.

“It’s terrible there. You have to cross deep rivers and walk through steep trails, on which only one person fits at a time."

“It’s terrible there,” Valdez said. “You have to cross deep rivers and walk through steep trails, on which only one person fits at a time. Sometimes, you have to climb on your hands and feet like a mountain climber.” 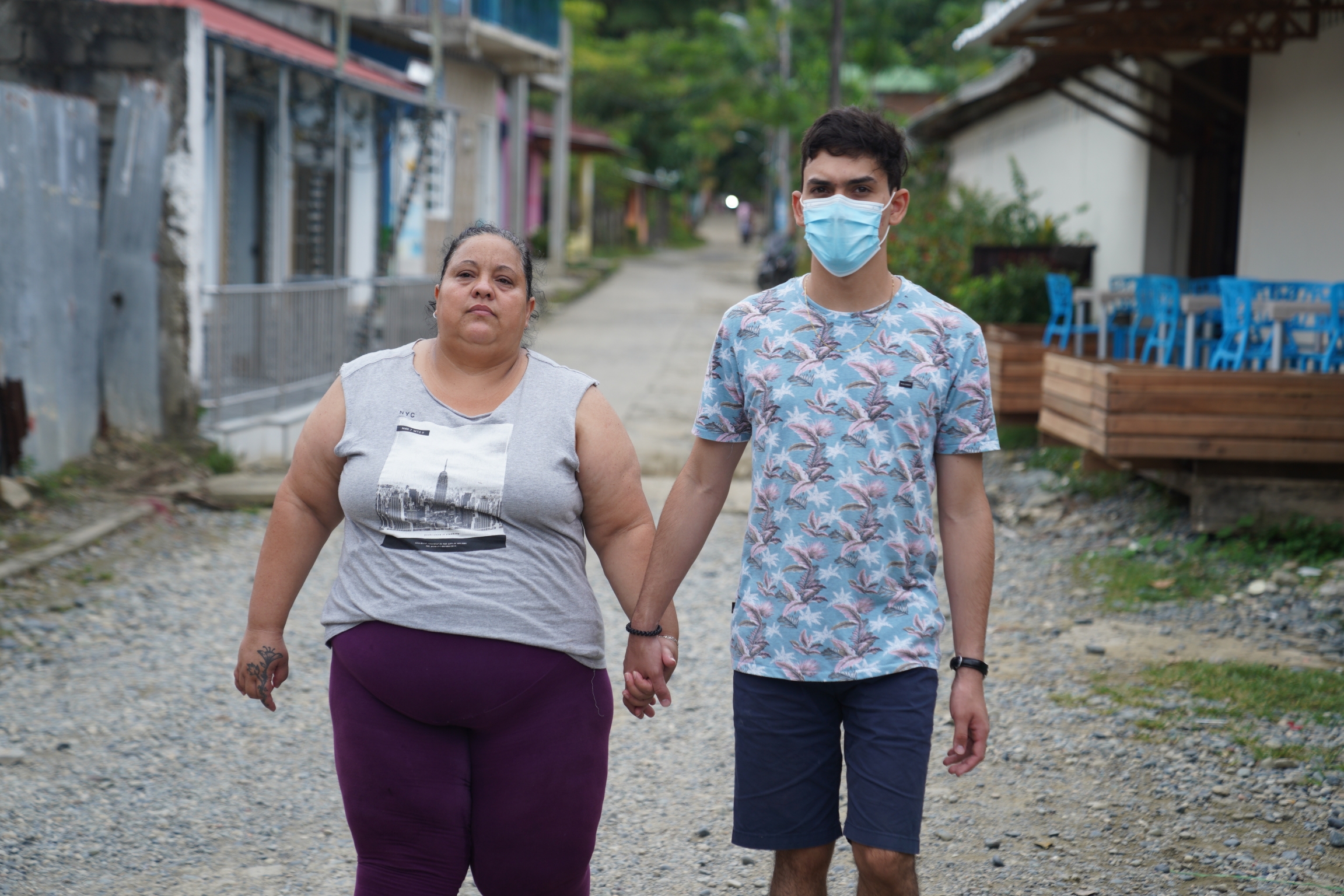 Danay Valdez and her son Raisel have tried to cross the Darien Gap three times and failed. They are now staying in Capurgana, Colombia.

Still, many continue to file through the jungle with their children.

At the other end of the Darién Gap in Panama, Doctors Without Borders runs a small health post for migrants. It served almost 6,000 people in July. Migrants arrive with injured feet and suffering from dehydration.

“They are arriving in a really, really bad condition,” said Raul Lopez, the project’s director. “The road can last [a] minimum [of] seven days during the rainy season and sometimes, 12 days. And the worst thing is, they are facing robberies, and some women are being raped.”

Doctors Without Borders is urging the governments of Panama and Colombia to develop safer routes for migrants passing through their countries.

That could mean giving them visas to take flights. Or allowing migrants to travel to Panama on boats, instead of having to cross the jungle.

But even those solutions might only cover a small number of people. For now, many will have to trek through the Darién Gap to make it into Panama.

In the jungle, there are jackets, jeans and shoes left by the migrants, as they shed their luggage to make it across the demanding trail. 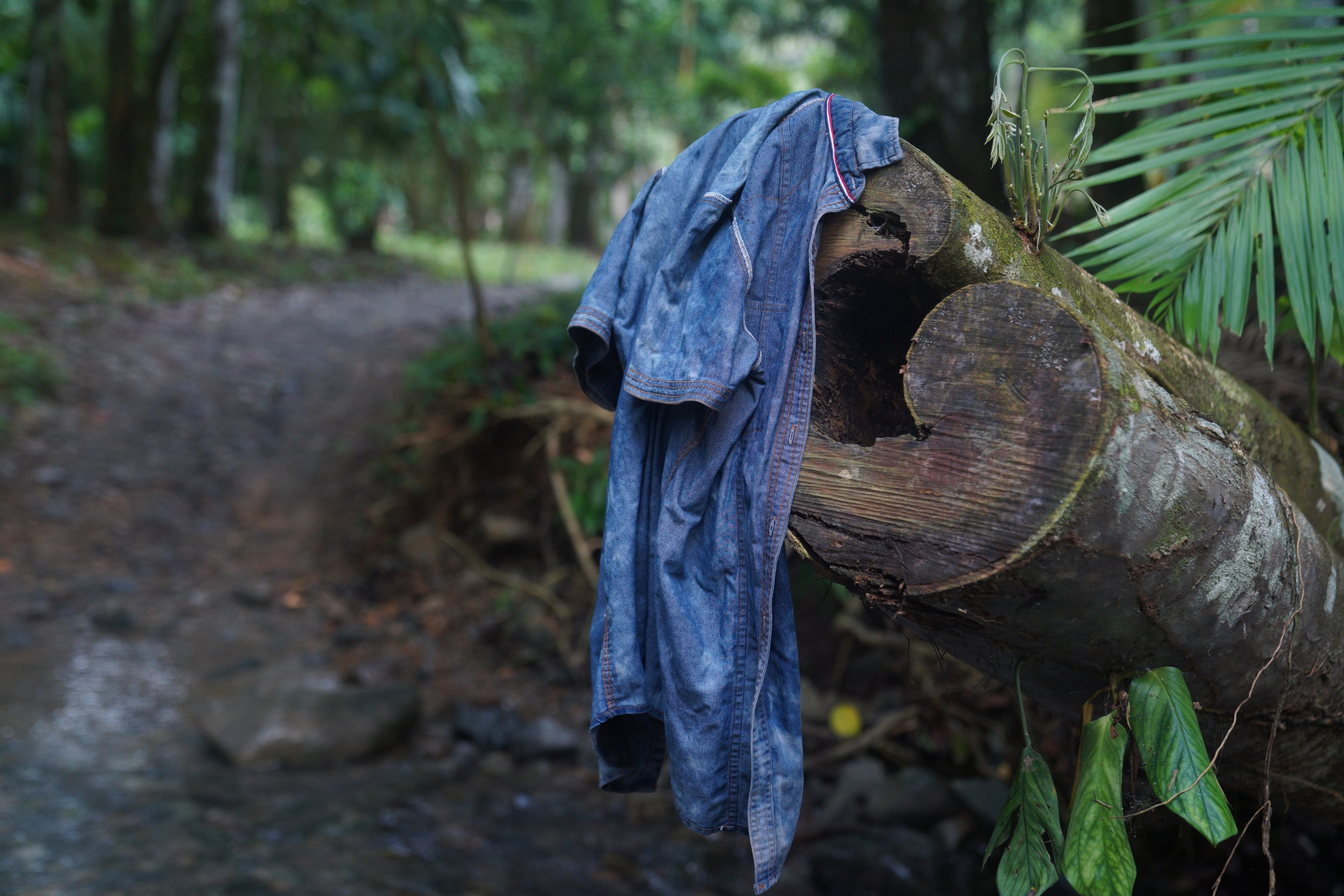 Migrants start to shed some of their belongings as they begin to trek through the Darién Gap, as they become exhausted and are able to carry less weight. It's common to find jeans and jackets strewn along the trail.