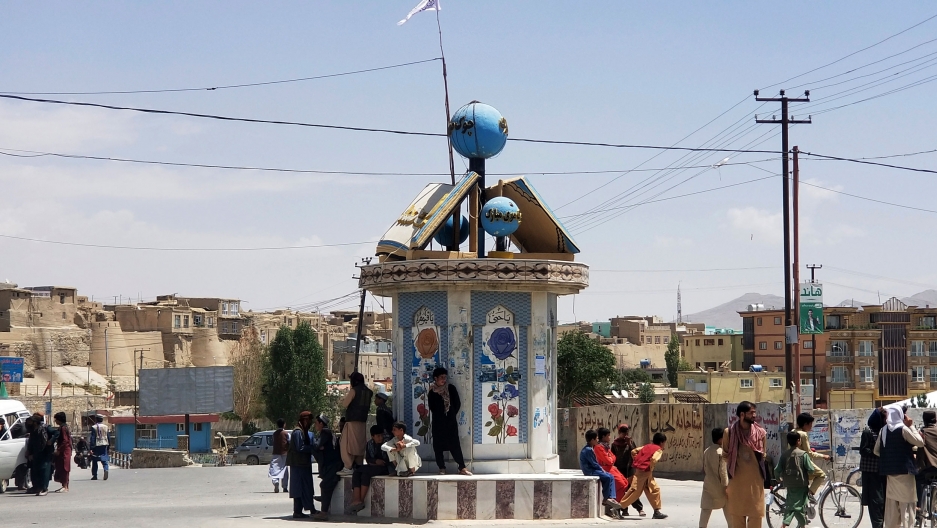 A Taliban flag flies at a square in the city of Ghazni, Afghanistan, after fighting between Taliban and Afghan security forces, Aug. 12, 2021.

Just weeks before the US military will end, the Taliban have now captured a strategic provincial capital near Kabul on Thursday, the 10th the insurgents have taken in a weeklong sweep across Afghanistan.

Seizing Ghazni cuts off a crucial highway linking the Afghan capital with the country's southern provinces, which similarly find themselves under assault as part of an insurgent push some 20 years after US and NATO troops invaded and ousted the Taliban government.

While Kabul itself isn't directly under threat, the loss of Ghazni tightens the grip of a resurgent Taliban estimated to now hold some two-thirds of the nation, and thousands of people have fled their homes.

The latest US military intelligence assessment suggests Kabul could come under insurgent pressure within 30 days and that, if current trends hold, the Taliban could gain full control of the country within a few months. The Afghan government may eventually be forced to pull back to defend the capital and just a few other cities. 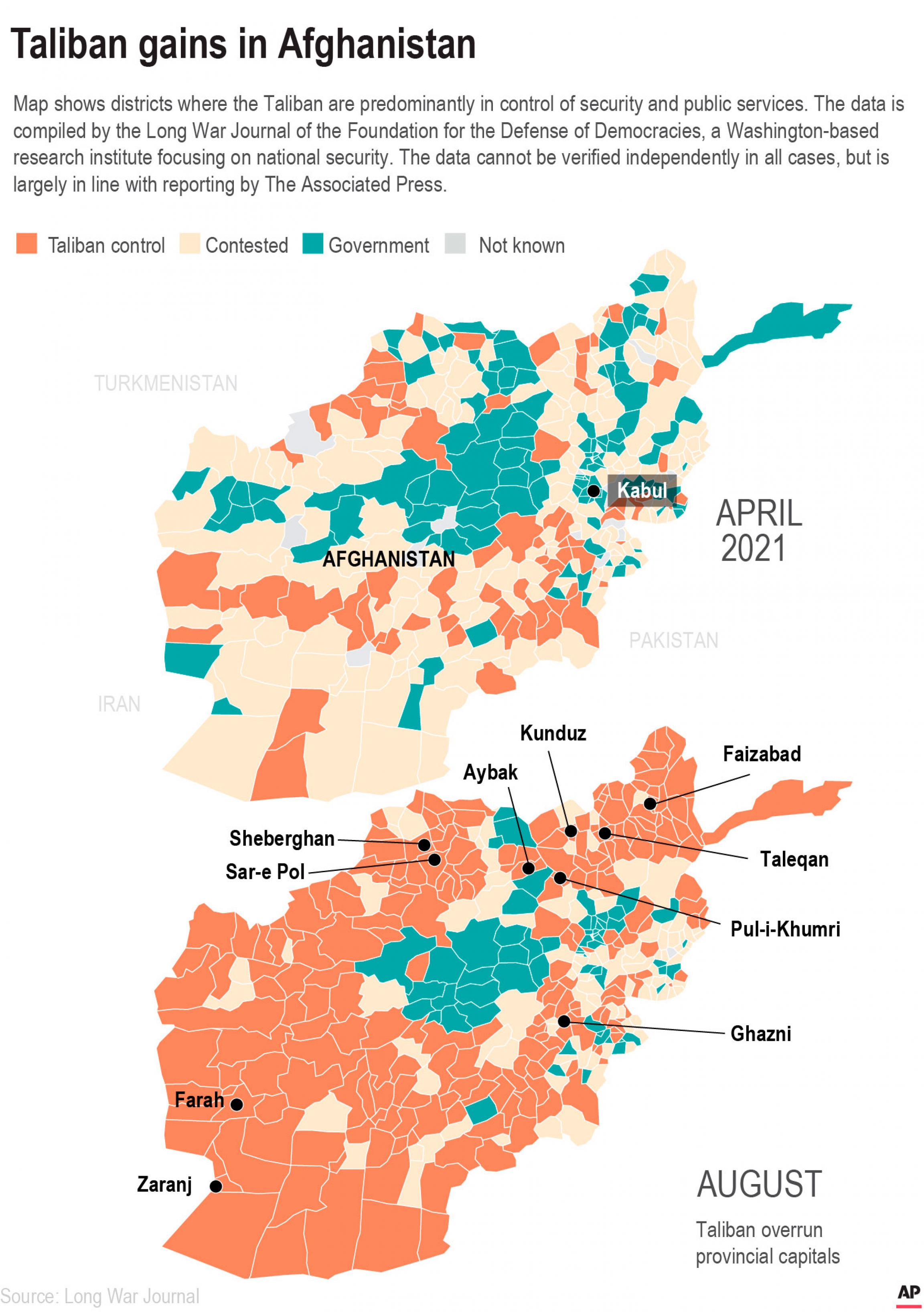 The onslaught represented a stunning collapse of Afghan forces and renews questions about where the over $830 billion spent by the US Defense Department on fighting, training those troops and reconstruction efforts went — especially as Taliban fighters ride on American-made Humvees and pickup trucks with M-16s slung across their shoulders.

It also raised fears that the Taliban would turn back the clock on the country and reimpose a brutal regime. Already there are reports of repressive restrictions on women and revenge killings.

Afghan security forces and the government have not responded to repeated questions from journalists over the days of fighting, instead issuing video communiques that downplay the Taliban advance.

On Thursday, the militants raised their white flags imprinted with an Islamic proclamation of faith over the city of Ghazni, just 130 kilometers (80 miles) southwest of Kabul. Mohammad Arif Rahmani, a lawmaker from Ghazni, said the city had fallen to the insurgents. Ghazni provincial council member Amanullah Kamrani also told The Associated Press that but added that the two bases outside of the city remain held by government forces.

Militants crowded onto one seized Humvee and drove down one main road in Ghazni, with the golden dome of a mosque near the governor's office visible behind them, yelling: "God is great!" The insurgents, cradling their rifles, later gathered at one roundabout for an impromptu speech by a commander. One militant carried a rocket-propelled grenade launcher.

Kamrani alleged that Ghazni's provincial governor and police chief made a deal with the Taliban to flee after their surrender. Taliban video and photos purported to show the governor's convoy passing by Taliban fighters unstopped as part of the deal.

Later Thursday, Afghan Interior Ministry spokesman Mirwais Stanekzai said the governor and his deputies had been arrested over that alleged deal. The officials could not be immediately reached for comment.

Stanekzai also acknowledged in a video message that parts of Ghanzi had fallen, though he insisted government security forces "do exist" in the city.

The loss of Ghazni — which sits along the Kabul-Kandahar Highway that connects the Afghan capital to the southern provinces — could complicate resupply and movement for government forces, as well as squeeze the capital from the south.

Already, the Taliban's weeklong blitz has seen the militants seize nine other provincial capitals around the country. Many are in the country's northeast corner, pressuring Kabul from that direction as well.

Fighting meanwhile raged in Lashkar Gah, one of Afghanistan's largest cities in the Taliban heartland of Helmand province, where surrounded government forces hoped to hold onto that provincial capital.

On Wednesday, a suicide car bombing marked the latest wave of violence to target the capital's regional police headquarters. By Thursday, the Taliban had taken the building, with some police officers surrendering to the militants and others retreating to the nearby governor's office that's still held by government forces, said Nasima Niazi, a lawmaker from Helmand.

Another suicide car bombing targeted the provincial prison, but the government still held it, she said.

"The Taliban used civilian houses to protect themselves, and the government, without paying any attention to civilians, carried out airstrikes," she said.

With the Afghan air power limited and in disarray, the US Air Force is believed to be carrying out strikes. Aviation tracking data suggested US Air Force B-52 bombers, F-15 fighter jets, drones and other aircraft were involved in the fighting overnight across the country, according to Australia-based security firm The Cavell Group.

The US Air Force's Central Command, based in Qatar, did not respond to a request for comment Thursday.

Afghan forces and the insurgents are also battling for control of the western city of Herat, capital of a province with the same name. The have entered the city, but government forces are also still there, according to witnesses. Highways, including those leading to the airport, are closed and flights were suspended.

The US Embassy in Kabul issued a statement late Thursday decrying what it called the Taliban's "unlawful arrest" of Afghan government officials, both civilian and security forces. It did not name those held, though it said they were being detained in several locations around the country.

The success of the Taliban offensive also calls into question whether they would ever rejoin long-stalled peace talks in Doha, Qatar, aimed at moving Afghanistan toward an inclusive interim administration as the West hoped. Instead, the Taliban could come to power by force — or the country could splinter into factional fighting like it did after the Soviet withdrawal in 1989.

The government's High Council for National Reconciliation called for peace talks to resume, saying it had submitted a plan to Qatar, without elaborating.

Ross Wilson, the charge d'affaires at the US Embassy in Kabul, criticized the Taliban in a tweet Thursday.

"The Taliban's statements in Doha do not resemble their actions in Badakhshan, Ghazni, Helmand & Kandahar," the diplomat wrote, mentioning provinces seeing heavy fighting. "Attempts to monopolize power through violence, fear, & war will only lead to international isolation."