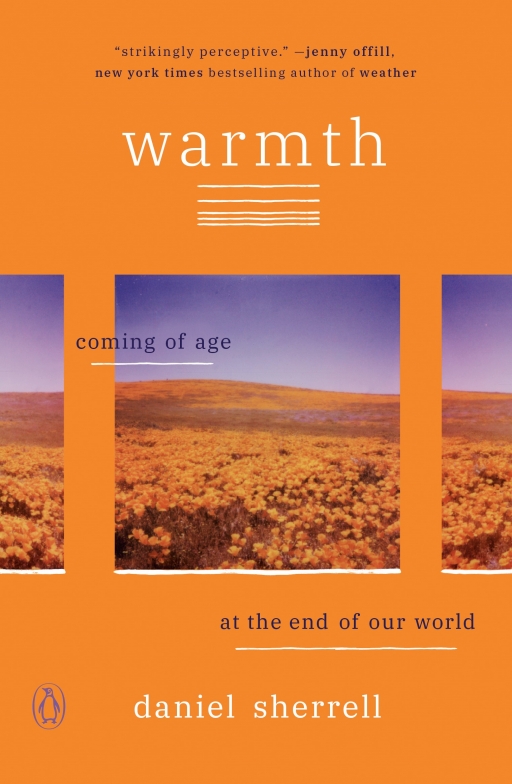 "Warmth: Coming of Age at the End of the World," is a new book by author Daniel Sherrell.

According to the latest UN climate report, the outlook is bleak.

The report says that global temperatures have already risen by 1.1 degrees Celsius since the 19th century, reaching their highest in over 100,000 years.

Related: 5 things to know about the new UN report on climate change

The report also warns that the Earth will quickly cross the 1.5-degree threshold set by the Paris Agreement as soon as the 2030s — earlier than in previous predictions. As a result, the world faces dire consequences — wild weather events from storms to heat waves are expected to worsen and become more frequent.

Even if emissions are drastically cut, some changes will be “irreversible" for centuries, the report says.

As the Brits say, we have to keep calm and carry on — but also not repeat our mistakes. But what does one generation owe the coming ones?

Daniel Sherrell, author of the new book, "Warmth: Coming of Age at the End of the World," joined The World's host Marco Werman to talk about how to face this climate reality.

Related: UN climate report is a 'code red for humanity'

Marco Werman: Let me just start, Daniel, with your reaction to today's news. When you saw the headlines this morning about the UN climate report and fires raging around the world, what were you feeling?
Daniel Sherrell: First, just again, waking up in the morning, seeing that headline, just being saddled with the immense gravity of the crisis we're facing and allowing myself to, like, sit in that fear and grief. And it's immense. It's a difficult reality to assimilate how dire our situation is.

Related: Athens becomes the first in Europe to appoint a chief heat officer

I imagine you feel that every time one of these kinds of reports comes out.
I do. But I also feel an immense sense of the moral stakes that still exist. I mean, this report makes very clear that the difference for each tenth of a degree we lower the temperature that our planet is overheating — we save millions of lives, literally millions of lives. So, the reason that I do this work is that there really is still a wide swath of outcomes. There are levels of warming that we could get to where we're literally facing the collapse of civilization as we know it. So, yeah, it's a heavy feeling. I mean, I try to allow myself to sit with that. But also not to let it crush me.

Related: With global warming, Emperor penguins will 'have no place to breed' researcher says

Those stakes that you outlined are why you wrote this book, "Warmth," getting the moral strength, taking on the challenge. You write that you grew up in a leafy suburban town. Your parents were at Rutgers University, your dad is a climate scientist. You write about how he was in Greenland drilling into the ice cap when your mother was pregnant with you. So, the climate emergency has always been around, front and center, in your family, and yet it wasn't front and center. How do you see your parents' generation's understanding of what you call the problem?
I think my parents' generation, who I have a lot of love for — I have many people dear to my heart who are Boomers — I think they have a very hard time assimilating the full reality of the climate crisis because their schemas through which they see the world— what the world is and how it works — were formed in decades where climate change was just not on anybody's mind, you know? And it makes sense to me that as you get older in life, your schema through which you approach the world is both more costly to give up and more difficult to change.And this is not everyone, and I'm not even necessarily blaming people, but there does seem to be this sense of sleepwalking. And even with my own father, who's an oceanographer who studied global warming as it affected the Antarctic Peninsula in the 1990s, there was a sense that he brought that information back and we just, living in the '90s and suburbia, you know, we didn't know how to assimilate that. Contrast that with Gen Z, it's a generation below mine, who, this is the water they've been swimming in since they came into political consciousness.

Related: Climate change is driving the worst drought Madagascar has seen in 4 decades

Well, there's a conversation you had with your father. Your father remembers it. You were 8 years old at the time. It's a talk you don't remember having with him, though. Can you tell us about that?
The way he tells the story, we were watching some nature documentary, I think, on television. And it mentioned something about global warming. And I asked him what that was and he sort of sagely explained and I was sort of apoplectic. I was like, "Wait a second. If what you're telling me is true, why haven't I heard about this before? Why isn't everybody talking about this constantly? And why haven't you told me about this already?​​" Because I could have — I mean, I was 8, but I was like, "I could have been doing something about this!" You know, he says that conversation happened. I was very young. I don't have a memory of it. Maybe it's something that he subconsciously invented in retrospect to feel like we had gotten into it together.But even if it happened, I had nowhere to bring that strand. It wasn't until I got to college and met some amazing fellow students who had already been radicalized around the climate crisis, that I was able to kind of situate and build on my values here and not feel so alone in them. And I think that is just so crucial for human life in the 21st century — is going to be processing this thing, not alone in our bedrooms on Twitter, but together with each other over the dinner table, physically and emotionally holding each other.
If Gen Z has been swimming in climate change in these deep pools of sorrows, you say, and the Boomers may not be so dialed in as you would like them to be, how is the tragedy so different for your generation?
I was born in 1990. That was the year of the first big climate conference in Rio. And it's sort of like our coming of age has directly tracked the emergence of the climate crisis into public consciousness. But it's also been a kind of emotional whiplash for us to sort of come of age on the premise that like, "OK, welcome to the world. You get to be an architect or a doctor ... and your future is bright!"And then as we emerge out of high school into college, it's like, "Wait, is our future bright?" And suddenly, there are asterisks and question marks over everything we had planned for the future, and I think a lot of us are still trying to find avenues through which to process that and process that in a way that doesn't just drink the sedative of blind optimism, but also doesn't deflate into despair because I don't think despair is actually a rational response to the situation.
Once we sit with that reality, allow it to fully settle in and see kind of what the future demands of us, what then do you want to convey to the next generation and those of us trying to cope psychologically with this grim reality that hangs over us?
I just want people to feel OK if they're feeling grief or confusion or overwhelm, like, those are deeply rational responses to the dire situation we're in. But I also want to convey to people that we don't have to suffer through these things alone, that we live in a massive social web, that if we build it, can establish links and emotional solidarity and political solidarity — that can actually be our saving grace in this century of upheaval.​​​​​​I think a lot of my friends in and out of the climate movement describe feeling very alone in their feelings of overwhelm about the climate crisis, not knowing where to take them. And this book was an attempt to give people a place to take them and to start having the difficult conversations you need to have with our loved ones about what the next century is going to look like.

This interview has been edited and condensed for clarity. AP contributed to this report.